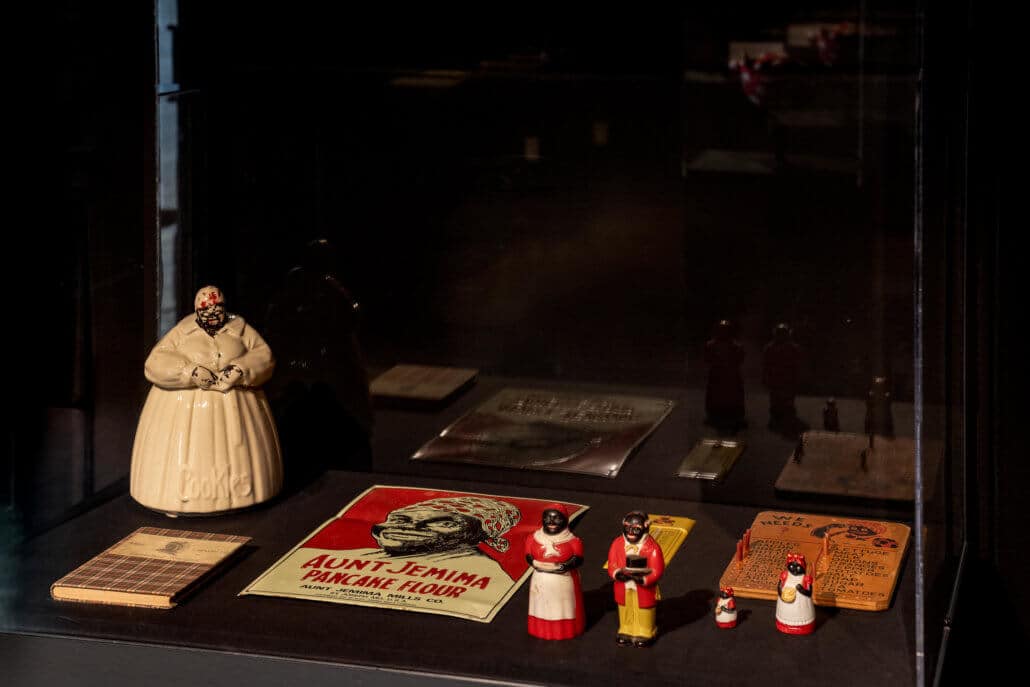 One hundred and fifty years ago, one of the most pervasive stereotypes of African Americans constructed in the wake of the Civil War, and arguably the most enduring image from the days of Jim Crow, was the caricature of the mammy. Caricatures are defined as pictures, descriptions, or imitations of people in which certain characteristics are exaggerated in order to generate a comedic or outlandish effect. The mammy was used as a vehicle to romanticize the Antebellum South and harken back to an imaginary time when African Americans—and black women in particular—gratefully accepted their life of servitude. This falsehood would permeate American culture for decades to come.

Through the turn of the twentieth century and into the era of Jim Crow, the mammy figure was often fashioned into domestic objects, such as dolls, and portrayed in minstrel shows, literature, films, and cartoons as a black domestic female servant who was good-natured, overweight, and loud. This ahistorical presentation of black womanhood not only embellished the realities of black life in the American South, but it also assisted in denying African American women any expression of femininity, beauty, and strength for over a century.

‘Making Mammy: A Caricature of Black Womanhood, 1840–1940’ explores how the mammy figure was produced in an effort to temper the atrocities of enslavement and serve southern interests domestically, economically, and politically. By bringing together films such as Birth of a Nation (1915), The Jazz Singer (1927), Gone with the Wind (1939), and the 1940s cartoon Scrub me Mamma with a Boogie Beat, along with photographs and artefacts, the exhibition examines the institutional legacy of this stereotype and illuminates the vestiges of America’s role with enslavement through exaggerated views of black womanhood. 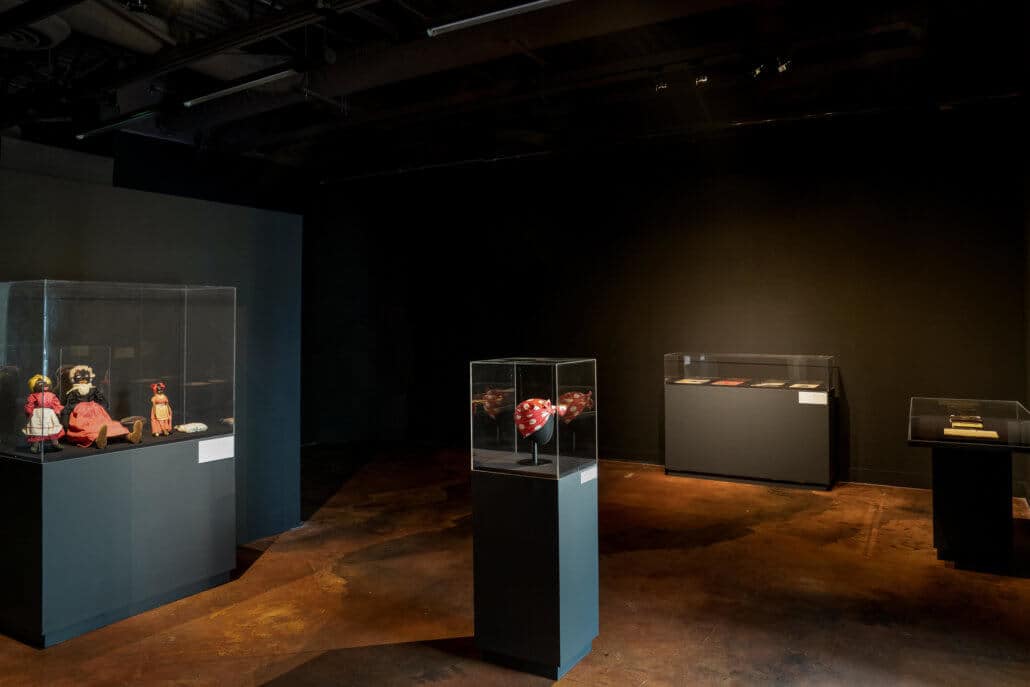 The Body Image & Femininity of the Mammy

The mammy image, as a physical type different from what white masters and mistresses deemed attractive from their Eurocentric perspective, provided slavery advocates protection from the accusation that white men demanded to have sexual access to the enslaved girls and women they owned. Mammy images, they believed, documented that black women were neither beautiful nor feminine. The truth, however, was that these domestic slaves, more often than not, were vulnerable to the sexual predators who claimed to own them “body and soul.” Working in close quarters among white men and women in slaveholder homes unfortunately made these girls and women ready targets for sexual harassment and abuse, as well as the jealous outrage of the offended spouse. Life often was outright awful for these slaves. They hardly felt, or were treated, in the genteel manner that the popular mammy myth indicates.

Despite the image’s suggestion to the otherwise, enslaved women cared greatly about their physical appearances and feminine self. They spent much of the limited time they were not working enhancing their physical appearance through shared hair and skin care. They adorned their bodies with handmade necklaces, bracelets, and earrings. Refusing to be limited to the tiny, drab wardrobe that owners provided, these women made, traded, decorated, dyed, and cleaned their own clothing and shoes. 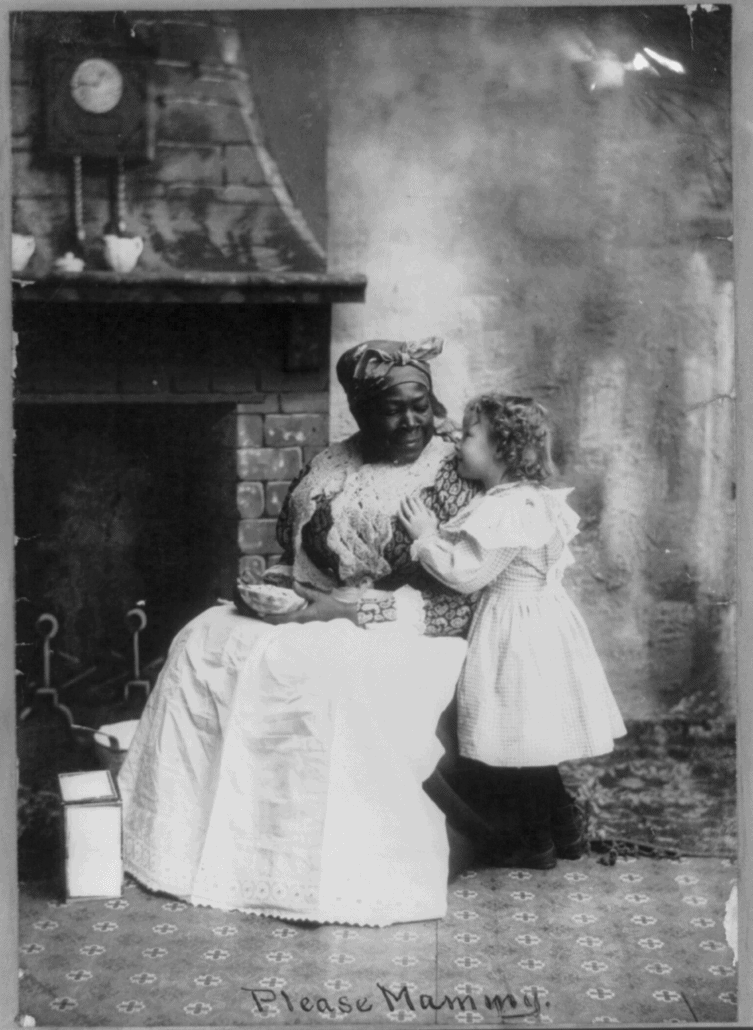 Black people, whether enslaved or “unfree” after general emancipation in 1865, routinely defied the myth of their submission and passivity promoted through images like the mammy. They did not enjoy being enslaved or oppressed, and they found many ways to express their agency and resist the power of life and death that white authority figures tried to impose. Domestic slaves lived and worked closely to their owners, providing them with unique opportunities to rebel, undermine, and harm those who took advantage of them or their loved ones. Poison, theft, gossip, abuse of children, breaking expensive household items, destroying precious clothing, spitting in food, ruining food, or disturbing an important meeting or social gathering were just some of the ways in which these girls and women exerted their agency and shifted the power dynamics between themselves and their owners’ white household. Most did so clandestinely, taking secret delight in their successes. They were not mammies.

Slavery has had a lingering negative impact on black people’s lives, not only physically, physchologically, culturally, legally, and economically, but also in the ways in which the race is depicted for public consumption. The mammy image still haunts black women’s lives today, even though it was born in the cruel, manipulative imaginations of slaveholding white men and women more than a century ago. Along with their racist sympathizers, these southerners hoped to convince the world that the enslaved women with whom they entrusted their children, daily household care, and intimate familial environment posed no physical or emotional harm to them. Their fantasy of the mammy who ignored her own needs or those of her family in order to answer their owner’s every demand is far from the truth. In films, household items, souvenirs, and a host of other products used daily with the face of “Mammy” prominently displayed, racist America distorted black womanhood to the point of caricature.

The “mammy” image was part of a series of stereotypes popularized in the United States in the nineteenth and twentieth centuries that was meant to uphold racist ideas of black people’s “natural inferiority” as justification for their oppression, initially as enslaved people and then as marginalized people during the era of racial apartheid known as Jim Crow. The US was joined in this anti-black campaign, for the same reasons, by other western nations. Internationally, these images supported Europe’s and the US’s brutal colonization of the “darker races” in Africa, Asia, Australia, the Caribbean, the Pacific, and the Americas.

Mammies, bucks, Uncle Toms, pickaninnies, and Jezebels dominated black representation both publicly and privately. US residents encountered these stereotypical images of black inferiority everywhere they lived, travelled, worked, studied, shopped, or entertained. Indeed, racialized images of black people filled the inventories of “decorative” household items manufactured domestically. They were also made for export abroad. Mammy images were always among the most popularly depicted. They appeared as toothbrush holders and soap dishes in the bathroom; candlestick, toothpick, and napkin holders, as well as cookie jars, salt and pepper shakers, appliance covers, and other crockery items for the kitchen; and as vases, lamps, hat racks, ashtrays, and candy bowls for the living room. Just outside the home, people cleaned their shoes on doormats decorated with these images; retrieved their mail from similarly painted post boxes; and, of course, snickered as they passed by their lawn jockeys. Blue-, pink-, and white-collar workers carried their attitudes about blacks to their jobs in the form of mammy-faced lunch boxes, desk ornaments, and playing cards. Toy manufacturers produced a large array of mammy dolls, toy banks, and miniature statues

. The food industry covered their boxes of Aunt Jemima pancake mix, rice, and other common items, including cleaning detergents, with drawings of a black mammy. 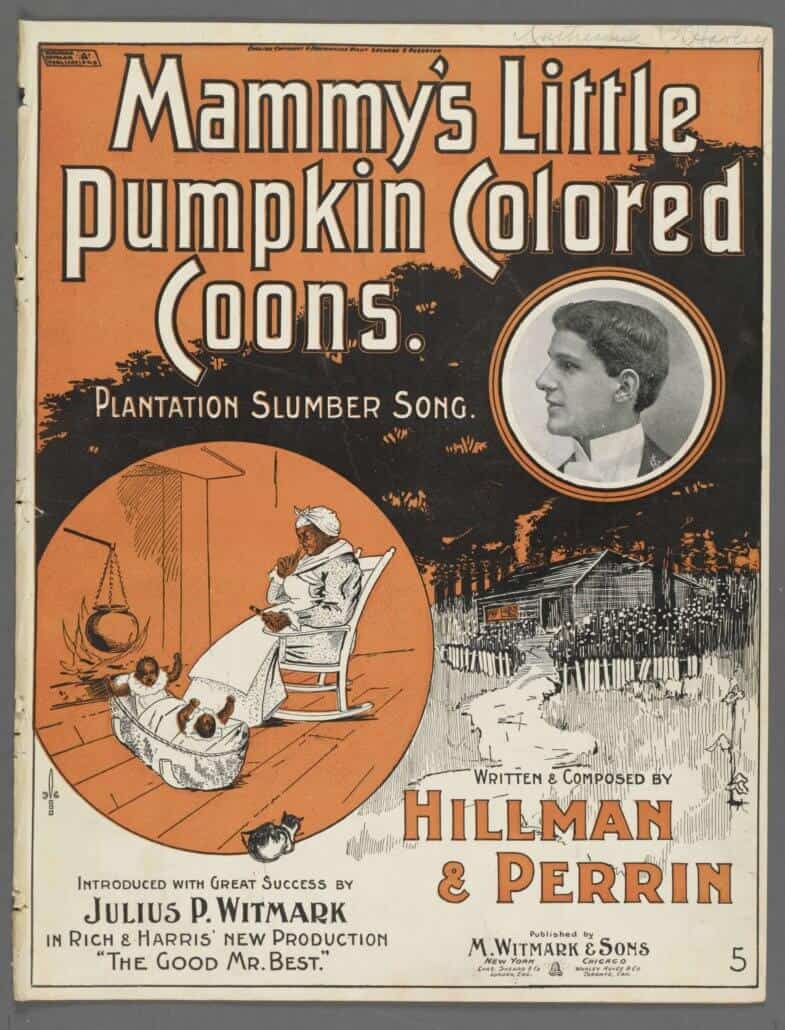 Images of a black mammy proved equally popular and lucrative, not only for photographers, painters, political cartoonists, sculptors, and so-called folk artists, but also for media companies who produced stage shows (known as “coon” shows), as well as blackface minstrelsy, musicals, and film in the nineteenth and early twentieth centuries.

Blackface minstrelsy rose to extreme popularity during the pre–Civil War decades as the US was rapidly developing into the largest, most lucrative society of enslavement in the Americas. White male musicians and actors with faces and bodies painted black traveled the nation, performing as ridiculously happy-go-lucky, nonsensical plantation slaves or the good-for-nothing city dandy. The most popular of these characters, initially, was that of “Jim Crow,” the creation of Thomas Rice in the 1820s. Mammy came to rival his popularity especially after the Civil War and well into the twentieth century. 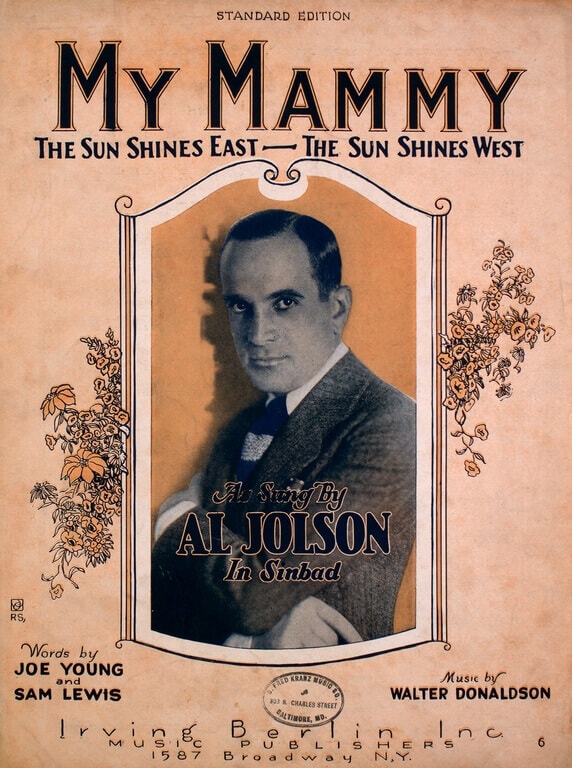 One of the first major mammy images in print was that of the character Aunt Chloe in Harriet Beecher Stowe’s 1852 massive bestseller, Uncle Tom’s Cabin. The dominance of the mammy character took on more sinister meaning at the end of enslavement, as Old South apologists, defenders, and romanticists sought to create a public image that would mask slavery’s physical, sexual, and psychological brutality. “Mammy” filled this bill for many. Along with myths of white southern belles, courtly gentlemen, and magnificent mansions dripping in luxury came the image of the sweet, loving mammy, always happy to be of service to her benevolent master’s family. Prominent southerners issued calls to erect statues of her in their town squares. They immortalized her in plantation novels, in their autobiographical accounts, and in ballads performed by popular crooners, barbershop quartets, and all-male choirs.

Black slavery was one of the first subjects that moviemakers drew on to entertain broad audiences and historicize their storylines. So important was this historic period and its dominating economic institution as a theme in early cinema that the most successful actors, regardless of race, began to solidify their place in Hollywood lore in films that engaged slavery plotlines—superficially, sentimentally, or even ridiculously, but almost always with extremely racist overtones. It was through the depiction of slavery and enslaved people in films such as Birth of a Nation (1915), The Jazz Singer (1927), and Gone with the Wind (1939), therefore, that the film industry of the early twentieth century quickly became one of the nation’s most available, and powerful, means of constructing racial identity. The mammy was, as in other genres of public representation, a main character.

Few were surprised that the first black woman to win an Oscar, Hattie McDaniel, won the award for portraying the buxom, fussy, loyal domestic slave in the blockbuster film Gone with the Wind. Although McDaniel’s substantial speaking role, and the Oscar she won for it, elevated the stature of African Americans on Hollywood’s big screens, the actual part of Mammy was consistent with stereotypical characterizations of black female house slaves whose entire lives centered on the whims and needs of their masters’ families. So prevalent was this role for black female actors at the time that McDaniel actually played a maid character seventy-four times during her long career. Overtly maternal, but with no suggestion of either an erotic nature of any sort or any attachment to her own black family, McDaniel’s presence in the private lives of the owners of the Tara plantation also erased the reality of the physical, emotional, and sexual abuse of domestic slaves. 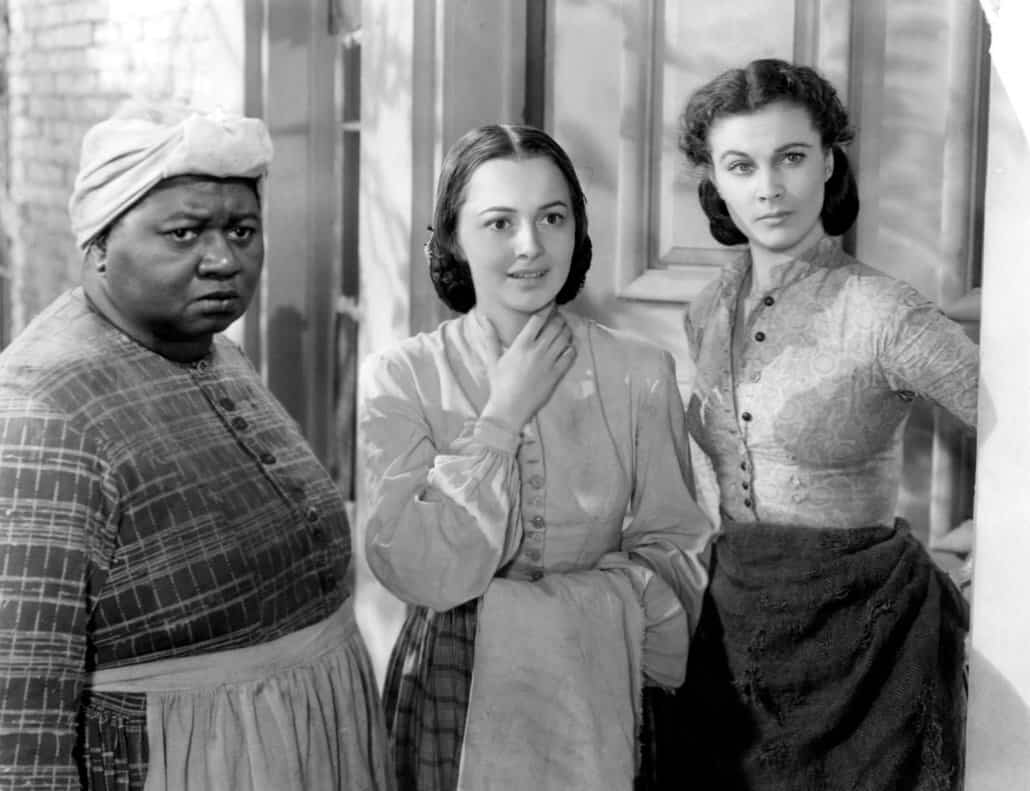 ‘Making Mammy – A Caricature of Black Womanhood, 1840 – 1940′ will be on show until the 1st of March 2020 at The California African American Museum in Los Angeles.

Brenda E. Stevenson, PhD, is Professor and Nickoll Family Endowed Chair in History and Professor in African American Studies at the University of California, Los Angeles.