‘Making Visible The Invisible: Art as Resistance’ by Layli Fouroudi

Journalist Layli Foroudi’s article titled ‘Art as Resistance’ (you can read it in French here) focuses on the dark effects of dictatorships and Islamic extremism in countries like Mali, Tunisia, Iran and France through the prism of artistic practices used specifically as acts of defiance. This broad reaching article shows the irrepressible spirits of everyday survivors of horrendous acts of terrorism and institutional cruelty. 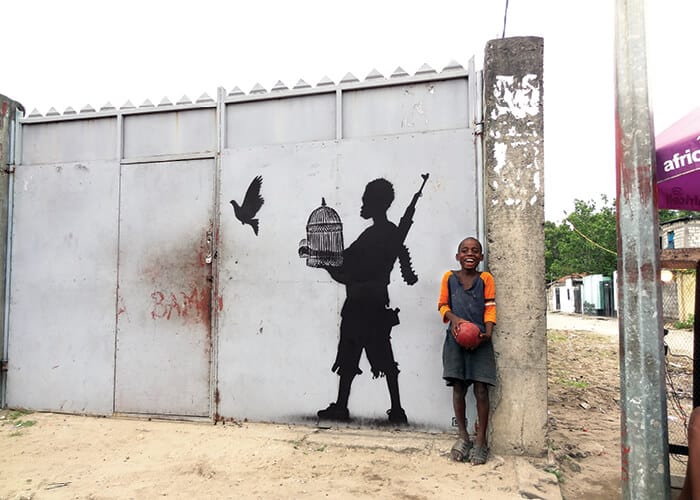 Peace unleashed by Goin in Kinshasa, Congo to comment on the issue of child soldiers in North Kivu. 2014. Photograph: Goin. Courtesy of the artist.

Walls in Tunisia standing in defiance of dictatorship; silenced musicians singing out from their place of exile; large letters, white on black, reminding Parisians of solidarity; South African muralists painting for change. In times of oppression and despair, artists have taken up arms to reinstate freedom and hope into the political landscape: to resist.

Art is not politics, but throughout history art has been used as an instrument of political power, as well as its critique, or a means to deconstruct (and reconstruct) the official state narrative. “Art is a battle for public space, a battle for imaginative possibilities,” said Charles Tripp, Professor at the London School for Oriental and African Studies (SOAS), in a talk following the eruption of revolutionary movements in the Arab region. Art can confront, subvert and mock the political in order to construct a new reality or ideal.

According to Tripp, the ideal medium for dissent is graffiti: it asserts presence, creates solidarity, is easy to produce and difficult to police. Buoyed up by the energy of the Jasmine Revolution, young Tunisians formed the collective Ahl Al Kahf and took to the streets to paint their revolutionary ideals across the medina, or ‘old city’ of Tunis.

Quoting Paul Klee, the Ahl Al Kahf manifesto states that the purpose of art is ‘making visible the invisible’ and that Mohamed Bouazizi ‘is the first visual artist in Tunisia.’ Bouazizi was the young man who sparked the revolution in December 2010 by setting fire to himself in front of Sidi Bouzid’s regional government building. This act of desperation made visible the frustration among the people of Tunisia over the living conditions and lack of human rights under the rule of Zine El Abidine Ben Ali. 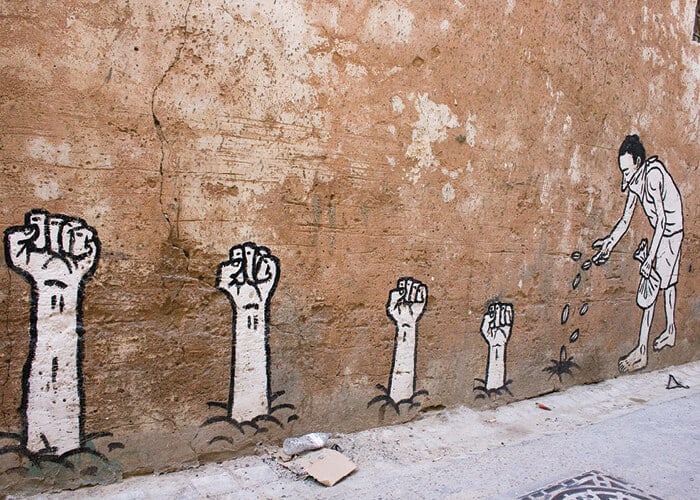 Tunisian wall painted by Zoo Project, a French-Algerian artist from Paris in the days following the uprising in January 2011. The “seeds” planted by dictator Ben Ali, of youth unemployment, economic disparities, and a lack of political freedom, led to a popular uprising. Photograph: Nadia Driss. Courtesy of the photographer.

“The artist’s voice was given courage by the revolution,” explained Nadia Driss, a Tunisian photographer and curator, “it was a chance for people to become informed, to form associations, to formresistance groups.” Ordinarily Driss takes photos of theatre and dance performers, focusing on their blur and movement, but events led her to photograph popular movements of resistance and protest: “Because of the context, there was an extra energy that gave you the means to do something.”

The song Kelmti Horra (‘My Word is Free’), composed by Emel Mathlouthi, was born with the revolution and sung in the streets, reminisced Driss. Mathlouthi performed the song at the 2015 Nobel Peace Prize concert, which was awarded to the Tunisian National Dialogue Quartet, a civil society group formed in 2013 to ensure the development of a pluralistic democracy following the revolution.

Music was also employed as a resistance tool in Mali when circumstance called for it in 2012, as extremist groups took over the north of the country, imposed Sharia law and banned music. Radio stations were burnt down, control towers were knocked over, phones were grabbed for playing ‘satanic’ ringtones, and musicians lived in fear. Outlawing music, in a society that reveres it, both devastated and mobilised people. “Before music got banned, [it] was an expression tool the way it is everywhere,” explained Johanna Schwartz, director of the film They Will Have to Kill Us First, which documents the music ban and the Malians’ response. “Once music was banned,” she continued, “I think it was a different story: musicians were creating music in spite of the music ban and because of the music ban.” 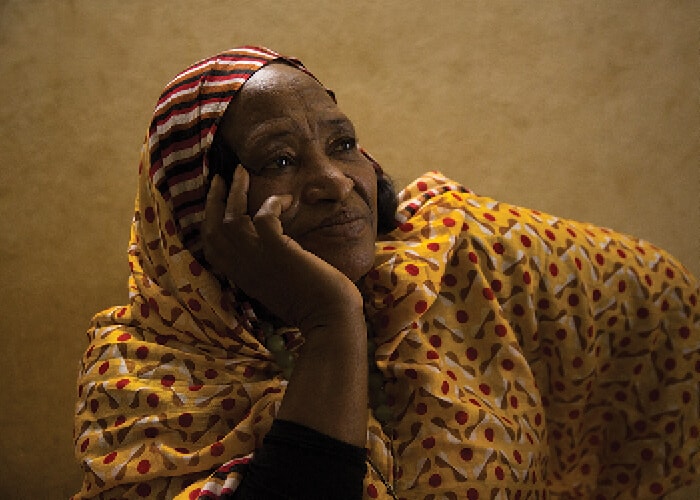 Khaira Agiba, featured in They Will Have To Kill Us First, 2015. Courtesy of Together Films.

Schwartz followed individual musicians who, exiled from their homes in the north, were responding to the crisis in different ways. The members of the band Songhoy Blues found each other in Bamako and rather than living in fear, they are creating music to push for the improvement of the country and to resist the ban. Khaira Agiba, a well known Malian singer, was so devastated at the time of the extremist takeover that she couldn’t sing. After a while, she got her ‘musical mojo’ back and decided she was going to do something about it. “I can’t speak for all musicians in Mali [but] for Khaira, her music was the reason that she was able to cope with the situation,” Schwartz said, over the phone from New York.

As for her own art, Schwartz sees herself as a ‘middleman’ between a story and the world, giving the latter access to the former through film. The rise and spread of extremism in Africa was a story she had been thinking about for a while. When her plans to attend the ‘Festival in the Desert’ were disrupted by the ban, she decided to go through with her trip, but as a journalist. “I instantly knew that if we could tell the story of the spread of extremism in Africa through this prism of music being banned, and through the eyes of musicians,” Schwartz said, “it would be a way to engage the public.”

The spread of extremism is not unique to Africa. Over the last couple of years, headlines have been dominated by the terrorist group ISIS and attacks on populations across the world have left people grieving and fearful. In the wake of the Paris attacks in November 2015,artists have been re-inserting hope into the atmosphere by invoking a response of solidarity, not vindication. 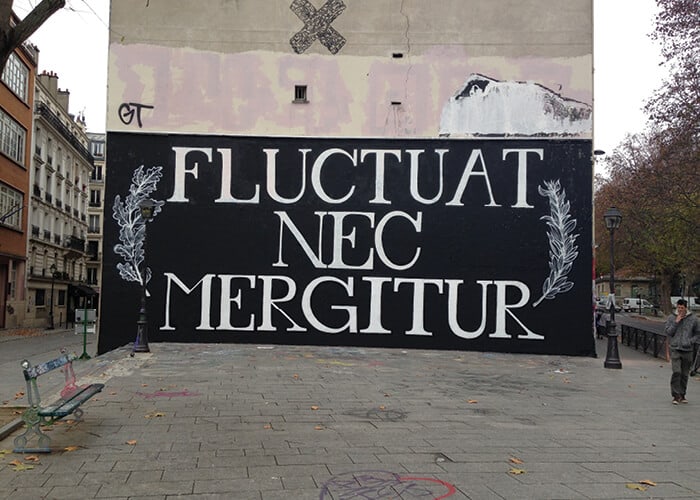 Grim team’s Fluctuat nec mergitur mural, meaning “you are being tossed but you don’t sink”.

Two walls in Paris were painted with the city’s motto, Fluctuat nec mergitur, a Latin phrase that means ‘you are being tossed but you don’t sink,’ according to Marc-Aurele Vecchione who led a team of graffiti artists in response to the attack. Vecchione’s Grim Team only work in letters, in keeping with the graffiti tradition of youngsters with spray-cans who write their names on walls. “Paris is in a moment of tempest,” he said, “so it is a good phrase to bring back and help people go through this tempest.”

Public spaces were policed and crowds were dispersed as gatherings were banned under the ‘state of emergency;’ but Vecchione and friends maintained their positions and the police just smiled at them. They know this sentence better than most Parisians since it is written on their uniform.

Art can be used to re-appropriate meaning, to give new significations, to hijack symbols. Paris’ motto had been taken up by nationalistsin recent times and the Grim Team wanted to reinstate its meaning of solidarity, one that does not exclude part of the population. “We want to say through this piece: even though we went through this attack we are not split by it,” explained Vecchione, who is concerned about the opposition to Islamic culture amongst French people since the attack on the caricaturists of the satirical magazine Charlie Hebdo in January last year.

What followed has been more walls and more art. While social media users were praying for Paris, anonymous artist Goin launched the hashtag #sprayforparis with his painting of Marianne, a French symbol of freedom, holding a paint roller and bucket in her hands in place of a flag and gun. Outside of Paris, artists in far away places like Brazil, Australia and the US, ‘sprayed’ in solidarity.

“Art is a no-border world where people stand together across traditional barriers,” Goin wrote in an email, “Solidarity should be one of the main purposes of art.” On Instagram, he specified, “I spray for France, Lebanon, Syria and for the entire world.”

In the global campaign #notacrime, street artists are transcending boundaries – socio- political and geographical – to protest and speak out against human rights abuses in Iran, where access to higher education is being denied to members of the Baha’i Faith, the country’s largest religious minority.

In an increasingly interconnected and global world, national issues of human rights violations become of international concern. In this context, #notacrime murals are appearing in cities including Cape Town, São Paulo, New York and, most recently, London. The campaign, spearheaded by journalist Maziar Bahari, is raising awareness and showing solidarity on this issue in public spaces, both physical and virtual. 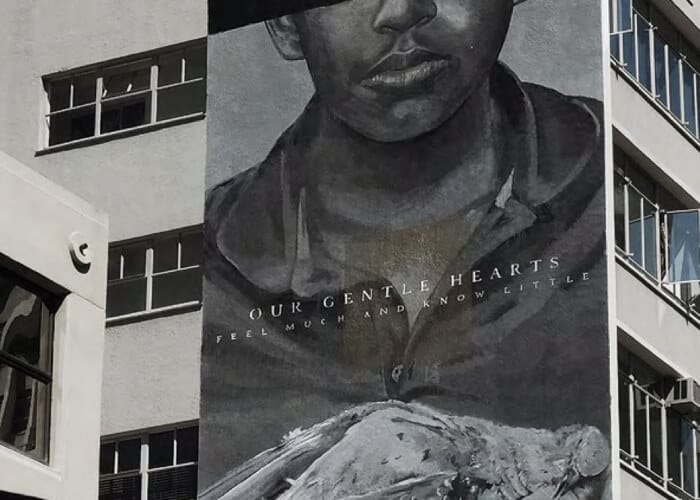 Photograph of Freddy Sam’s mural Our Gentle Hearts for the #notacrime campaign in November 2015. Photograph: Freddy Sam. Courtesy of the artist.

South African muralist Freddy Sam painted a large-scale mural in the centre of Cape Town, opposite the Home Affairs building. The painting, all in grey with a faint gold square in the centre, shows an injured bird in the hands of an anonymous boy with the words ‘OUR GENTLE HEARTS FEEL MUCH AND KNOW LITTLE’ printed across his chest. Freddy Sam tries to keep the imagery and the message of his work simple and universal in order to invoke a sense of beauty and inspiration in the people that see it. “No human rights issue is isolated and we have the power to realise how everything is interconnected,” he said, explaining why he felt that this issue was relevant to South Africa, “the struggles of a few should be a pain shared by all and the strength of many can be the hope of one.”

Universal values, such as beliefs and struggles for education, can unite artists and citizens around the world. TheJohannesburg mural and street hustle for the campaign was instigated in December 2015 by artists Andrew Whispa and Wesley Pepper, who felt that the campaign linked strongly with the history of South Africa, where Apartheid systematically denied rights to part of the population, as well as with recent debates about the affordability of education.

Their art opened up the streets as a ‘space of democracy,’ taking art out of museums and widening the sphere of politics, as French philosopher Jacques Rancière posited in Dissensus: On Politics and Aesthetics, “Doing art means displacing art’s borders, just as doing politics means displacing the borders of what is acknowledged as the political.”

Rancière goes on to state that practices of art do not “take leave of themselves to become forms of collective political action” but they contribute to the landscape of what is visible, sayable and doable. Art has an effect: it’s a tool of expression, it brings people together, it invokes emotion, it provides solace, but is it politics? “I think art can wake people up,” Vecchione said on the power of art, “Art is a type of activism and spraying ideas is the first step, then you need to walk and take action.”

Layli Foroudi is a journalist, currently doing an MPhil in Race, Ethnicity, and Conflict at Trinity College, Dublin. Based in Ireland, she writes, translates, and illustrates freelance while studying.

This article was translated into French by the l’Institut Français, and can be read here.