Crowned with an enormous dome of numerous overlapping geometric lattices, the very architecture of the Louvre Abu Dhabi celebrates the intersection of both mathematics and organic life, and pays homage to all that humanity has in common. The Louvre Abu Dhabi, truly, is a universal museum in the era of globalisation. 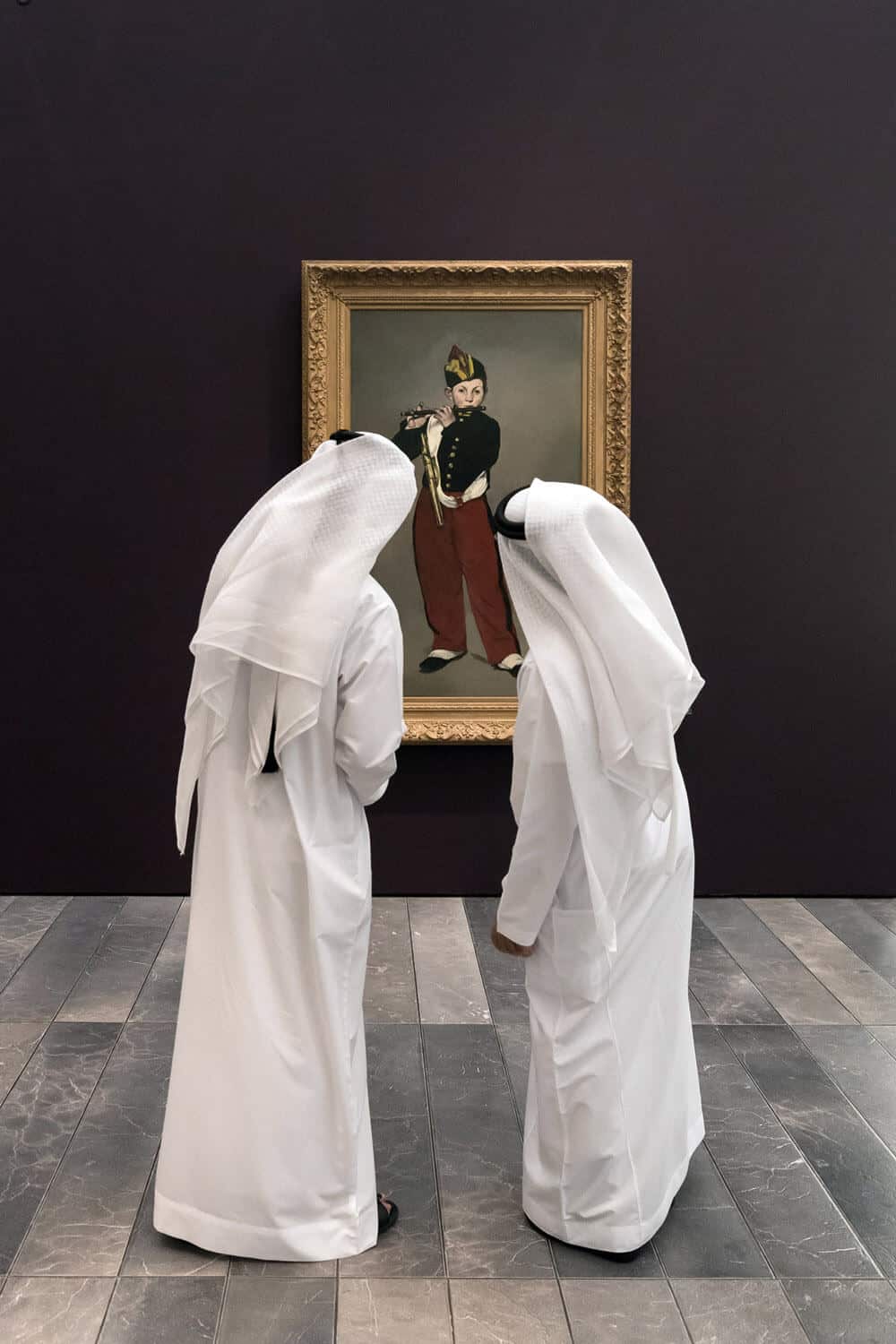 Inauguration of Louvre Abu Dhabi on November 8 2017. In front of The Gypsy, Edouard Manet. © Luc Castel

In November 2017, when the Louvre Abu Dhabi opened to the public, images of the monumental latticed domed structure and its highly anticipated contents were projected onto the iconic glass pyramid of Le Louvre in Paris. In this singular gesture, more than a decade of cultural collaboration between France and the United Arab Emirates was summarised.

Six weeks later, at the launch of ‘From One Louvre to Another’, the first of the Louvre Abu Dhabi rotating temporary exhibitions – Manuel Rabaté, the director of the new museum described the show that charts the history of the Louvre museum in Paris as acting as a mise en abyme. This French phrase is a lyrical way of drawing parallels between the two museums. It was his way of saying that the tale of the Parisian institution holds up a metaphorical mirror to that of the Emirati one.

During his address to the gathered audience at the launch, Jean-Luc Martinez – the president of the Louvre (in Paris) and the curator of the current Abu Dhabi exhibition – claimed that the overall aim of this exhibition is to show that while the Abu Dhabi museum was founded in a completely different time and place, the idea of making the story of human existence accessible to all is similar in both museums.

Such comparisons are problematic. The Louvre in Paris was founded during the French Revolution and was the result of direct public pressure to have access to the royal art collections. It wasn’t until the 19th century that it made vague stabs at appearing more global and opened a “non-occidental section”. The Louvre Abu Dhabi on the other hand, dissolves any compartmentalising of artworks and attempts an egalitarian sweep through human history. Whilst the two museums may be linked in name and in provenance, the similarities stop there.

Walking through the Louvre Abu Dhabi is like walking through a history book. Visitors begin in the Great Vestibule where angular glass cabinets display groupings of similar objects from distant civilisations. An ancient Egyptian statuette of the goddess Isis nursing her son Horus, for example, stands next to a medieval French sculpture of the Virgin and Child and a 19th century maternity figure from Congo’s Yombe culture – all displaying the universal love of a mother for her child.

The thorny issue of religion, often a bone of contention in the Middle East, is also faced head on with Quranic artefacts and Christian symbols seen side-by-side. 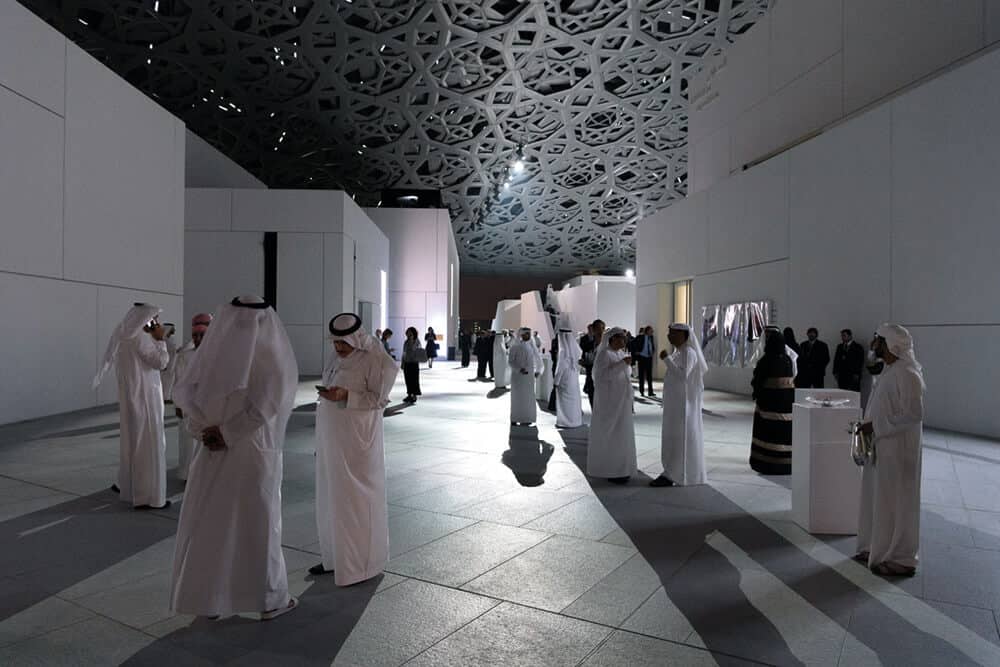 The four interconnected wings of the museum continue to delineate the story of human civilisation, beginning at around 8,000 BCE when communities first began to settle.

The vast halls include examples of the world’s first great powers. An imposing figure of Ramesses II, Pharaoh of Egypt, is flanked one side with a statue of Gudea, the ruler of the state of Lagash in Southern Mesopotamia, and on the other by a breastplate worn by rulers of the Bronze Age in Europe. Behind them, in the next hall, the gleaming marble figures of ancient Greece remind us of a future yet to be formed.

Continually, moments of cultural production from disparate and unconnected parts of the globe are placed alongside each other and, as such, their individual stories are placed in a much wider and universal context. A clear example of this comes in the display of a Standing Bodhisattva from Gandhara in Pakistan next to a Roman Orator, both from the second century. Whilst they come from different continents that had no contact or cross-over, the statues are of remarkably similar size and form and both exhibit clear influences from ancient Greece in the folds of their clothes. It is elements like this that allow audiences to “see humanity in a new light”, as is promised in the museum’s tag line.

The Louvre Abu Dhabi on the other hand, dissolves any compartmentalising of artworks and attempts an egalitarian sweep through human history. Whilst the two museums may be linked in name and in provenance, the similarities stop there

The thorny issue of religion, often a bone of contention in the Middle East, is also faced head on with Quranic artefacts and Christian symbols seen side by side. In one room, ancient copies of the Torah, Bible, Quran and Sutras from India are housed in a single row of vitrines.

Later, visitors are taken through the Asian trade routes of the seventh century, the golden age of arts and sciences in the Islamic world and onwards to the journeys of Portuguese navigators who explored the coastlines of Africa and the Indian Ocean in the 15th century.

Renaissance greats such as La Belle Ferronnière – one of only 15 Leonardo Da Vinci oil paintings in existence – Francesco Primaticcio’s bronze Apollo Belvedere and Titian’s Venetian masterpiece, Woman with a Mirror, are some of the Western masterpieces – but there are paintings and objects such as carpets, ceramics, jewellery pieces, carved ivory and textiles from all over the world. 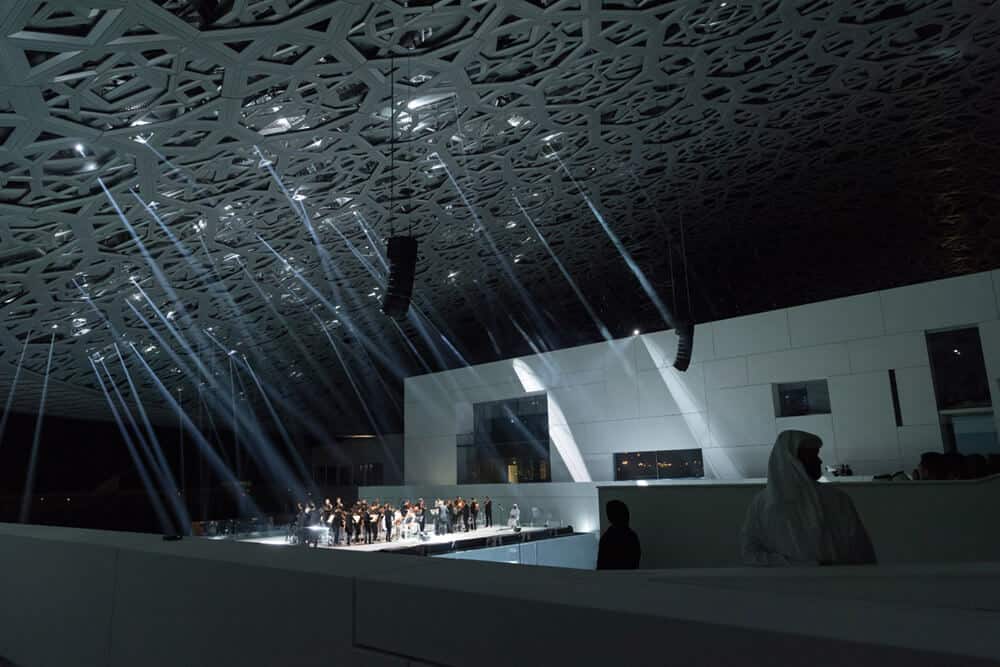 The sections covering art from the 19th and 20th century are a testament to the museum’s curatorial triumph. Great lengths have been taken to make links across continents. Examples of this can be found in the hanging of a meditative Mark Rothko painting alongside a colour block piece from Sayed Haider Raza, and an Alexander Calder mobile next to a Saloua Raouda Choucair sculpture – both whom explore movement and form.

Essentially, what the Louvre Abu Dhabi attempts to do is draw a line through all of civilisation and, importantly, leave the story open ended. As we emerge from the final pages of this intricate story, our threads of thought are set free – far into the 21st century when we live with one foot in the rapidly evolving future and where new inventions such as robotics, virtual reality and artificial intelligence affect our ways of life and inevitably, the way we produce art.

Ultimately, the museum maps out a future where globalisation is the norm and one which decisively tilts the centre of the map away from the West, despite the fact that the museum recently spent US$450m on the Leonardo da Vinci’s final work Salvator Mundi. This is something the Louvre in Paris – borne from a colonialist history – could never do and why – although this institution bears the same name – the leap from one Louvre to another is a quantum shift. 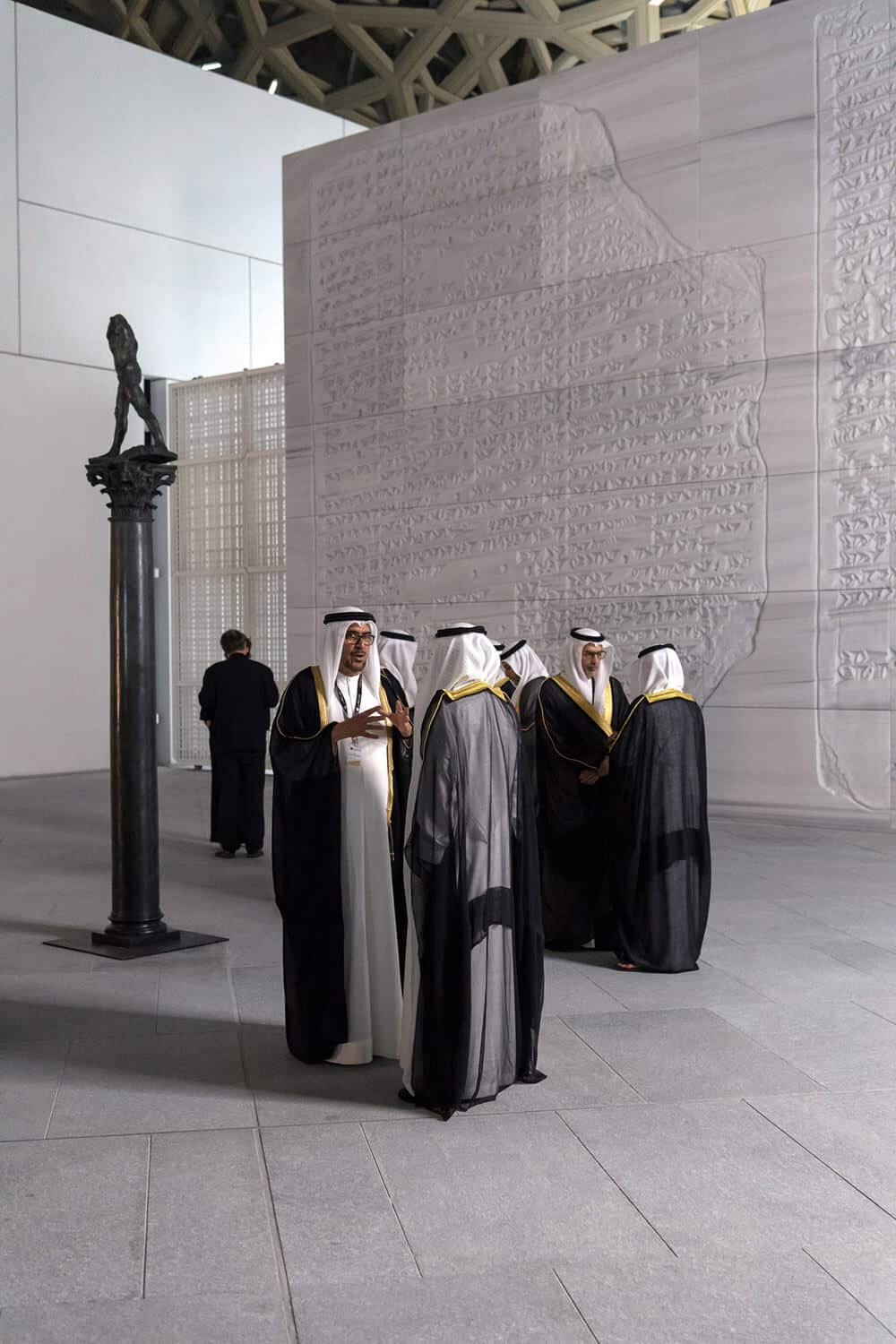 Anna Seaman is an arts and culture writer and journalist adding a voice to the conversation around contemporary art.