MUCH SPOKEN ABOUT FOLLOWING HER GRADUATE EXHIBITION, SEAN O’TOOLE CATCHES UP WITH YOUNG CAPE TOWN ARTIST DANIELLA MOONEY TO ASK ABOUT AN OIL SPILL. 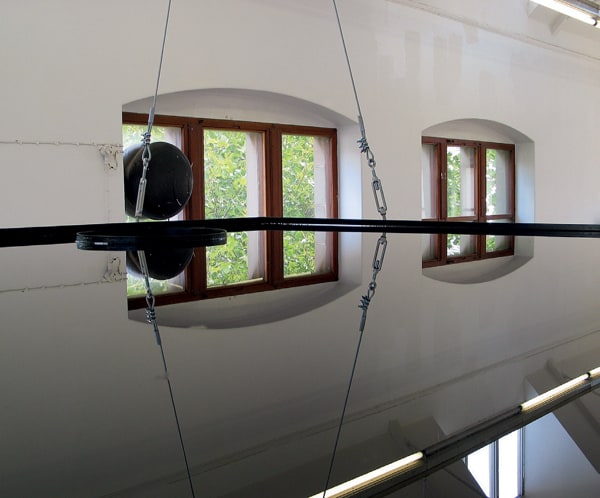 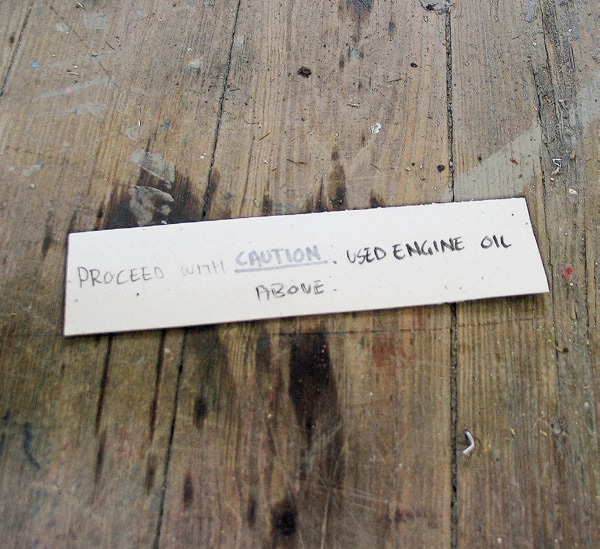 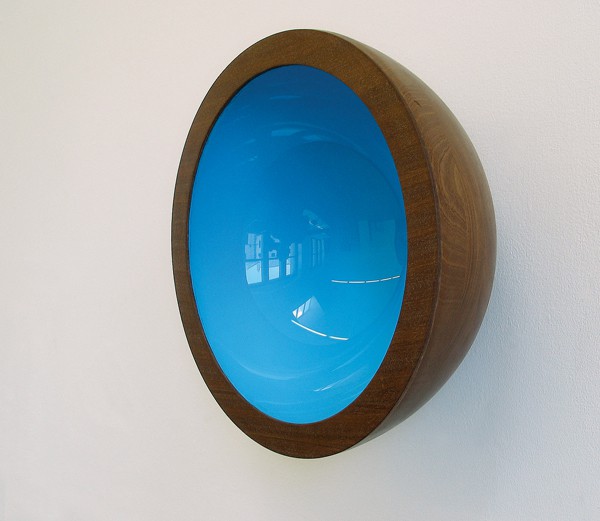 The context: a graduate exhibition at the Michaelis School of Fine Art. The time: early afternoon, December 2009. The venue: an artist’s studio on a first floor. The text on the wall explains that the sculptural objects on display belong to Daniella Mooney. One work in particular dominates the space. Entitled Your Sky, it is not easily described. Here goes. Suspended in space by cable rigging, a square-shaped object hovers over two wooden ladders. The ladders are an invitation to poke your head through the bottom of the floating object. Naturally you do. It’s then that you encounter a still, polluted lake of engine oil, 40 litres of the stuff.

As these things have a habit of doing, the oil managed to sully a curious visitor to Mooney’s exhibition, titled A Rainbow in Curved Air (after minimalist composer Terry Riley’s second album from 1967).

“I think she had a bit of ‘fro and got oil all over her,” chuckles Mooney, formerly of Nelspruit but now a resident of Cape Town, when we meet. Dressed in white blouse and black jeans, her manner hesitant but confidant, her small hands animatedly aiding her many explanations, Mooney tells how the angry viewer eventually tracked her down, by telephone. “I apologised profusely. I realised I should have put up a sign.”

Text. It is both an ally and enemy of the visual. For her graduate exhibition, which earned Mooney the top mark in her year (but not the Michaelis Prize), she prepared a short artist’s statement. It provides a useful insight into the thinking underpinning the sparse array of sculptural objects on her exhibition, amongst them a curved sphere made of mahogany wood and carved table lamp with it’s solidified beam of light.

“This body of work has unfolded as an exploration and understanding of light,” offers Mooney’s statement. “Light, being multi-faceted in nature, permeates every aspect of reality, and as easy as it is to know what light is, it is harder to tell what light is. Many of the works try capture some of the intrinsic qualities that light possess; be it the transcendent effect of looking up toward the blue sky, the ephemeral essence of a rainbow, or the intangible rays extending from the sun.”

Supervised by Jane Alexander and Gavin Younge, I ask Mooney where the initial impulse for her work came from. Her third year exhibition, she says, referring to a leaf canopy she installed in a small room: “I tried to recreate light falling through the leaves, that dusk feel.” The idea was to evoke the sensations of light in an unfamiliar environment so as to “make the spectator view it in a different way”.

She mentions the Danish artist Olafur Eliasson, also James Turrell. Obvious references, once you think about it, unobvious when you consider how their ideas are engaged locally. Since we’re charting influences, I ask about her expartner, the young Cape Town sculptor Rowan Smith: “I admire his skill. It was great because we both love working with wood. He really opened my eyes to wood carving and assembling.”

MANY OF THE WORKS TRY CAPTURE SOME OF
THE INTRINSIC QUALITIES THAT LIGHT POSSESS.

Previously an assistant to Paul Edmunds and hard at work helping Julia Rose Clark when we meet, I ask about the title to her graduate show. Was it important?

“Quite. It tied it together quite well. The work is about perception. A rainbow in curved air would mean that the rainbow is straight and the air is curving the rainbow. It is about how you choose to perceive that, which would make it a reality for you. I forget who it was, but someone described the Terry Riley album as two spatially separated mirrors” – she giggles momentarily – “which also fits well with my work.”

Interestingly, Your Sky, the centrepiece of Mooney’s show, was originally conceived as an outdoor work.

“I wanted the oil to reflect the real sky. Working with the elements, especially in Cape Town, it’s a headache. I had to size it down, which became interesting. Working with restraints pushes you to find more interesting and innovative solutions to this phenomenon, which is so intangible.”

Given her interest in ephemeral things, I ask Mooney if she keeps a diary or sketchbook to record the evolution of her ideas. She looks at me cross-eyed. I’m obviously being cute, it implies – or simply old-fashioned. Her sketchbook is a computer screen, she says, the archive of her work contained in her diligently catalogued bookmarks. How does she categorise her bookmarks? Scientifically: Copernican Revolution, Buckminster Fuller, Alchemy and so on. Buckminster Fuller!?

“He had this theory that equated light to thought,” offers Mooney. “If you can transmit and send off light signals and beams, you should be able to do the same with thoughts. He believed our eyes are receivers and transmitters for thought. It is just wonderful, the idea of beaming your thoughts into the atmosphere.”

ALEXANDRA MAKHLOUF, WHO TWICE WON THE MARTIENSSEN PRIZE AT WITS, TALKS TO CATHERINE GREEN ABOUT BOOKS, DRAWING AND ART WITH PSYCHOLOGICAL THEMES. 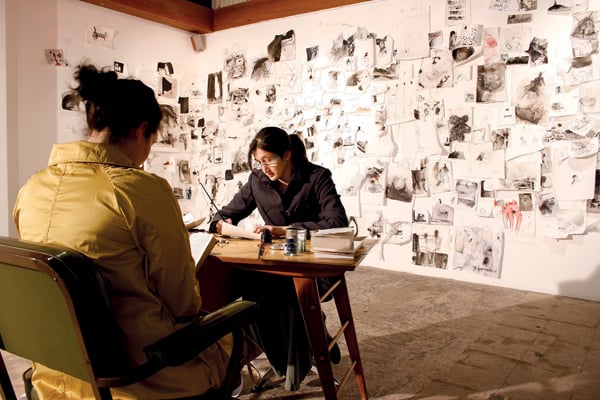 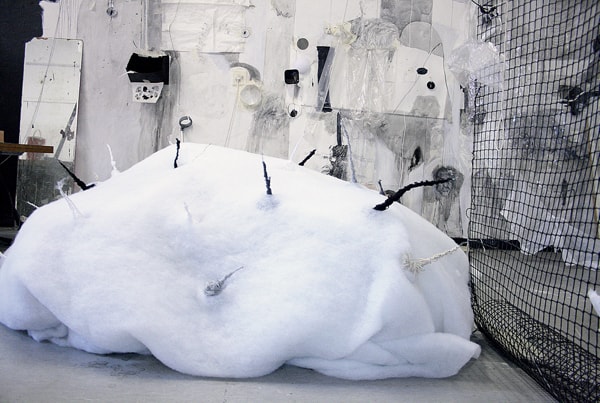 Alexandra Makhlouf is a dedicated bibliophile. When I first met her she reminded me of a character by Dickens, intricately etched and idiosyncratic. She sat with a pile of books and a cappuccino scribbling furiously into her notebook. Given the bookish markers, I asked about her appreciation for the written word. Makhlouf, whose work was included on the group exhibition The Marks We Make (Goodman Gallery Cape Town), replied, “I can’t separate literature or the novel from my work.” Makhlouf takes refuge in books and television, their fictional worlds offering inspiration and lifestyles to vicariously live through. “Reading is my friend,” she elaborates. She lists as fictional muses the writers Aldous Huxley (“for creating a completely fictional world”), Umberto Eco (“for his sense of detail”) and Italo Calvino.

Makhlouf has twice won the Martienssen Prize, awarded by Wits School of Arts, in 2008 and 2009. The first time she won the prize she showed a proliferation of drawings made while talking to people and watching television. The aim was to create an inclusive creative communication through the process of drawing and writing. Makhlouf identifies drawing as her preferred artistic practice: “it makes me feel more comfortable when I draw… It’s like a blanket or a transitional object.”

One of the installation works shown was the culmination of a yearlong project exploring concepts of narration, exclusion and the novel. Over many months, Makhlouf began to draw and paint on the walls of her studio, sticking up plastic netting, utensils, cups and hollow fibre, developing characters and moulding a fictional space. In many ways the monochromatic work embodies a three-dimensional absurdist novel in the style of Samuel Beckett. The excessive use of transparent plastic objects encouraged spatial trickery. Some areas were inaccessible, leaving the viewer feeling disorientated. There was no clear narrative to the space as people could navigate it according to their own desires. Makhlouf explains, “I’m interested in the power the narrator has. It can be objective, it can be third or first person, you can lie completely and lead your audience on… I like that sense of power.”

ART WAS SOMETHING I HAD
TO FIGHT AGAINST AND FOR.

Makhlouf again won the award with a performance that involved another form of interaction, albeit hollow fibre suits attached at the hands and head. An exploration of how social activity has been increasingly mediated by other media, the suits forced a level of physical interaction. The alienation of the audience from the individuals in the suits, as well as the overwhelming experience of being in the suit, which become too hot and suffocating if worn for too long, created a multi-levelled narrative on the nature of relationships. The suits became “a shell for the experience”, akin to a journal entry or a photograph.

Makhlouf’s tactile and sculptural sensitivity is a response to a severe eye condition that has affected her since childhood. This condition has progressively worsened over the years, resulting in partial blindness: “Art was something I had to fight against and for.” Perhaps spurred on by the need to grapple with difficult emotional situations, Makhlouf has an interest in psychology and artists who explore psychological themes (Andrzej Nowicki, Jonah Sack and Nedko Solakov). The most sophisticated articulation of her psychological state occurred in her final year project at Wits. An entire room was painted white, a reference to Milan Kundera’s book, The Curtain: An Essay in Seven Parts. In Kundera’s book the novel is described as a utopia, “a place where there is no forgetting”. Makhlouf used arbitrary objects that related to her personal history – a collection of eye drops (a daily companion for her since she can’t produce tears) and white plastic forks (received from her mother everyday) – that she stuck onto the walls. The exhibition space gave them value and created a repository for the accumulation of memories. Makhlouf ’s grandmother, who has Alzheimer’s, was an inspiration for this work, her mental state causing her to weave string through a plastic tree in a repetitive fashion. For Makhlouf, the tree image refers to concepts of memory, knowledge and heritage. In her dark ink works, suspended at different levels in the central space, blurred ink figures and tree forms emerged out of the paper, the forms reminiscent of Rorschach inkblot test, apparent but indistinct. Her technique and sensitivity of line unsettles the utopia in a sea of inky representations.

Catherine Green is a writer and researcher based in Johannesburg.