A NUMBER OF PROMISING YOUNG PAINTERS HAVE EMERGED FROM UNIVERSITY ART SCHOOLS IN THE LAST SEVERAL YEARS. LINDA STUPART CONSIDERS THE GHOSTS AND LACUNAE IN THE WORK OF IAN GROSE. 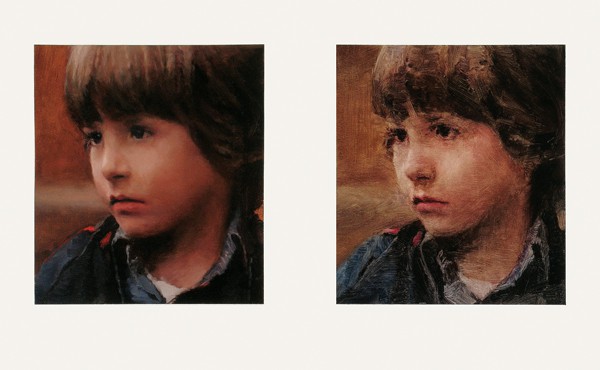 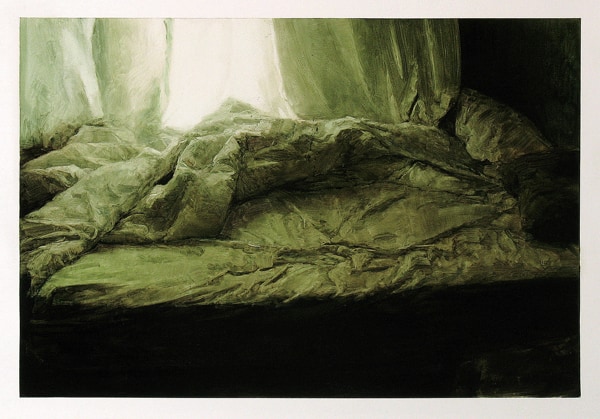 Endlessly I sustain the discourse of the beloved’s absence; actually a preposterous situation; the other is absent as referent, present as allocutory. The singular distortion generates a kind of insupportable present; I am wedged between two tenses, that of the reference and that of the allocution: you have gone (which I lament), you are here (since I am addressing you) … – Roland Barthes1

The evening of the Michaelis graduate exhibition, I receive an sms from Ian Grose, the surprisehit painter whose Other Things filled the muchcoveted Michaelis Gallery for the 2010 show. The message read, “Thank you again for noticing the comma. x.” The comma referred to here is in the title of Grose’s Colour, Separation, a triptych in red, green and blue successively of slightly different images of a (the artist’s) bed, unmade only on one side, the other empty, flat, waiting. As in Barthes, the paintings speak to the lover and the lover’s absence. The amorous Other is defined by an implication, a fragment and a loss written on the neat linen of the painter’s, the photographer’s (for these oils are painted from Grose’s own photographs) and the Lover’s bed.

It is the comma in this title that, for me, defines Grose’s practice; a pause, that speaks to the translation from moment to photograph, photograph to painting, painting to a photograph of a painting, and then the gap between this photograph and the memory it supplants, erases, hides. Of course, the comma here also prefigures Separation, the distance and the absence so embedded in the artist’s production.

This absence permeates every element of Grose’s oil paintings. It is evident in Boris on Snowy Path Without Boris, where Grose takes on the authority of painter and memorialist of his own holiday photograph, removing the figure from this idyllic image so that the violent erasure of subject becomes the focus of an otherwise adorable landscape. An emptiness, too, is the subject of Passenger Proxy where the front seat of the car is violently blurred, indicating a wrenching removal of the subject. When asked who was in the front seat in t(his) photograph, the artist replies: “No one was in the car, but I’m generally saddled with transporting my best friends and lover(s). In their absence, there is paint – which is to say, painting. Or in their place, rather.”2

Here, as in Colour, Separation, the painting is of a photograph of a private void made more visible by the act of painting as, through a motif of longing, lines of thought between painting, photograph and subject are constantly and complexly traversed. Even in Twin Apparition, a painting of an almost cute, yet undeniably disquieting little boy, the object is absent. Painted from the scene in Stanley Kubrick’s The Shining, where the young hero first encounters the horribly corporeal ghosts of dead girl twins, the painting’s abject horror, blood and drama are invisible except in the doubling of the young boy’s face as he pauses, recognising, perhaps, what he is seeing.

An absence, certainly, pervades Grose’s paintings, but also (as with the comma) an inhalation, a pause, pregnant with the possibility that painting entails. For, while emptiness may feature as subject, Grose’s paintings are far from empty. Amongst a series entitled “Ghosts,” which features paintings of paintings (a reference to the “death” of his medium, as well as the traces of the artist’s encounters of these specific works), is a completely red painting. Simple, minimal even, this work may appear shallow at first glance. However, as with so much of Grose’s work, it is a quotation. This red painting is pulled from an hypothetical moment of discord in Arthur C. Danto’s fictional exhibition of identical-seeming red paintings, where, discussing the proposal of an unhappy student who has proposed his hastily copied Untitled be included, Danto explains (by way of defining painting itself perhaps):

Yet the painting is not empty in anything like the way that mere expanse of red-painted canvas is, which is not even empty as a blank page might be, for it is not plain that it awaits an inscription, any more than a wall of mine might were I to paint it red.3

A rare portrait, Norman Thomas di Giovanni, Translator of Borges, provides a key, then, to the artist’s beginnings: with an undergraduate degree, not in art, but Philosophy and English Literature, Grose sincerely and dutifully considers painting not only as language, but as translation, with a world of emotion, art and popular culture to be mediated in the in-between-ness, the “insupportable present” of the artist’s imagination. Not inappropriately, Grose is currently paused, and poised, for the year ahead, working towards a solo show, although he has no concrete plans with a gallery thus far.

Linda Stupart is an artist, writer and educator living and working in Cape Town.