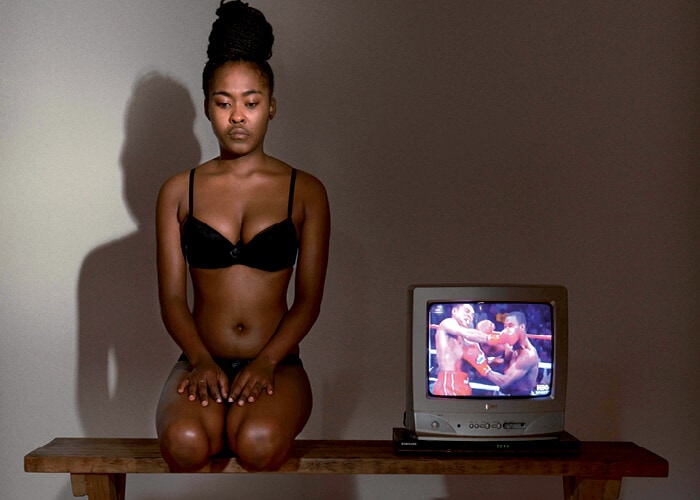 “Someone always cries during my performances,” Buhlebezwe Siwani tells me, adding, “There’s always at least one.” She isn’t bragging – it’s an observation delivered more as a statement of fact than a badge of pride. I ask why she thinks her work might reduce a spectator to tears. Siwani shrugs, “I don’t know. It’s different every time.” The implication is that it doesn’t matter to the artist what her audience feels but simply that they feel, that her work engenders an immediate and visceral response. “I like looking at the way people look at my work,” she acknowledges, “Seeing them as they receive it.”

A complex relationship to her audience is, in many respects, key to Siwani’s practice, which she locates at the interface between public and private experience, common and secret knowledge. In her 2014 contribution to the show ‘Between Subject and Object’ at Michaelis Galleries, Siwani explores the social existence of ritual, a recurring theme in her work. Inzilo: ngihlahla kwa bafileyo (A time of mourning: I live with the dead) sees the artist, clad only in her underwear, climb a mountain of mattresses to don a dress of rattling black buttons. These provide acoustic accompaniment to the series of choreographed actions that comprise the work, among them lighting a candle and chanting the Lord’s Prayer in Zulu. Inzilo concludes with Siwani scrambling to bury herself atop a bed of dark earth. Although at the centre of a crowd of onlookers, she seems very alone. The rhythm of these funerary customs, void of any marked expression of grief or bereavement, feels curiously out of kilter. Siwani goes through the motions of mourning her own death and simulating burial as if she is lost to herself, an outsider in her own body. It remains unclear whether the audience members are positioned as witnesses, voyeurs or trespassers, but we undoubtedly gain brief and privileged access to a world of which we are not invited to be wholly a part. 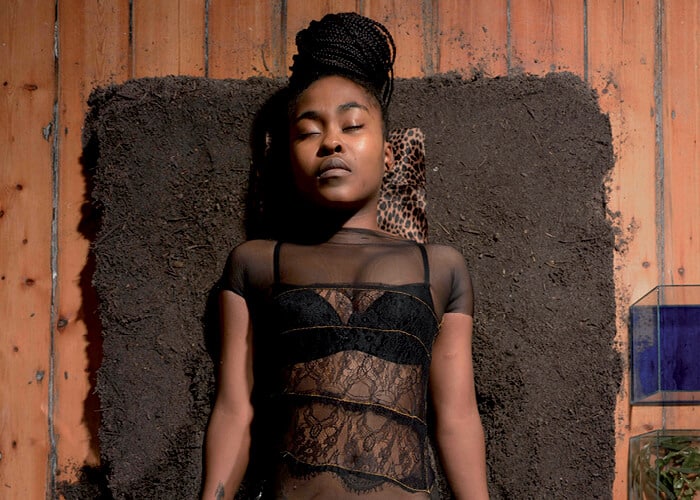 Inzilo draws upon Siwani’s experiences as a sangoma or traditional healer. As a conduit between the lands of the living and the dead, a sangoma is, Siwani maintains, “always an outsider in the real world.” From that liminal space, a medium cannot mourn.

Today, her work as an artist represents an extension of her work as a healer, “but I am always a sangoma first,” she reminds me. She does not adopt either role uncritically. Qunusa Buhle! (2014),a photographic series that forms part of her current MFA degree at Michaelis School of Fine Art, documents the artist laboriously washing herself with a bar of hard, green soap into which the word qunusa – to clean – has been carved. Recalling Siwani’s childhood bathing routine that would often take place in front of her many brothers, these photographs also speak to the role of women in Ubungoma, the practice of traditional healing. Female sangomas can be considered polluted by their gender, but from her position as an insider – the holder of the ‘secret knowledge’ from which her Masters body of work takes its name – Siwani is uniquely equipped to query this spiritual bias. 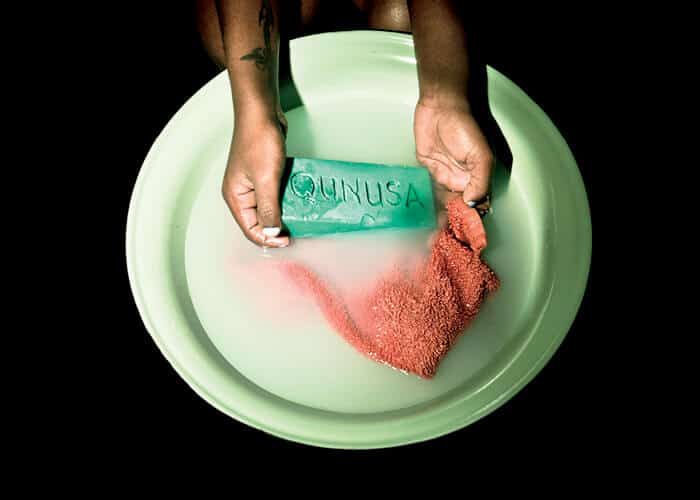 As in previous works, the audience/artist relationship in Qunusa Buhle! is ambiguous and malleable. Are we as viewers issuing the command? Is there a third unseen speaker, someone just beyond the frame in the darkness? Or is the command an exclamation by the artist herself, a parodic echo of the voices that remind her of her place in the world?

Performance art that takes the body as a locus for meaning and action is often personal. In Siwani’s case, her body is a medium for expression; a raced, gendered and sexual sign that bears the traces of individual and collective history. It is also simply a costume. “My body is not mine because my ancestors own it,” the artist says. “It’s just a vessel. Nobody’s body is their own for long”.

Buhlebezwe Siwani’s dual roles as both artist and sangoma set her apart from other young artists working primarily in performance. And whether or not she brings one to tears, her work undoubtedly rewards the attention it is given.

Anna Stielau is currently a Masters candidate at the University of Cape Town, where she is free to think about visual culture without worrying about eventually being employable. She is a two-time gold medal winner in the Business and Art South Africa (BASA) Arts Journalism awards.