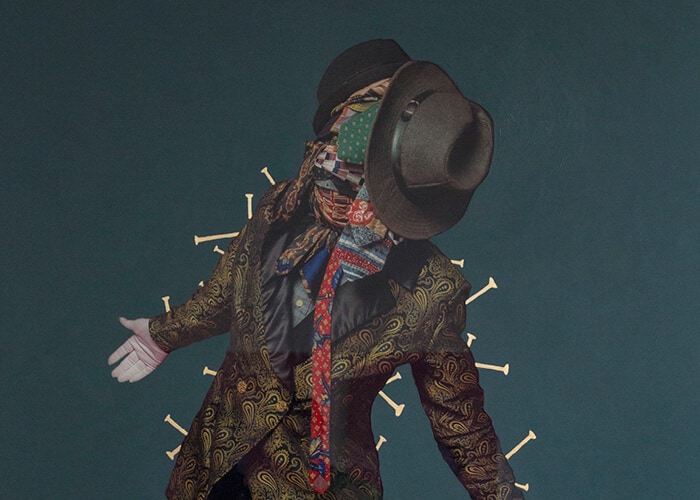 SN: “ Awesome. We also have free parking bays here if you can’t find anything.”

The irony of our blind introduction as a virtual physical description immediately reveals Simphiwe Ndzube’s fascination with the form and function of fashion in our daily interactions. His concern with the human figure and how “we cover our bodies, and the ways we present and disguise ourselves” remains a consistent reference point for the multiplicity of theories and sensitive concepts being unpicked and stitched together, which Ndzube is considering, internalising and projecting in his own work.

Ndzube, born in Johannesburg in 1990 and living and working in Cape Town, has a playful buoyancy in his stride and demeanour. This elated movement, habitually enhanced by years of Pantsula dancing, is echoed in the performative subject matter of Ndzube’s recent work in his studio space at Michaelis, UCT. While majoring in sculpture, Ndzube has also been exploring the integration and appropriation of two dimensional and three dimensional mediums, such as the physical stitching of material onto canvas, digital copies of material glued to large-scale performative compositions and his recent experimentation with matt acrylic paint and collage on glossy Perspex prints. 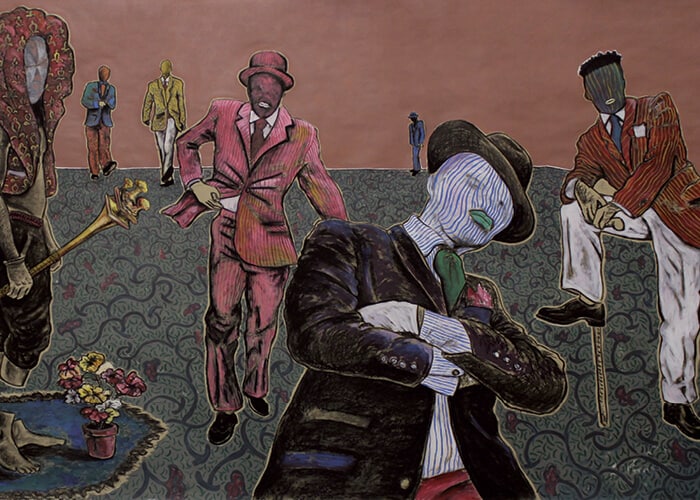 Ndzube’s work is informed by his interest in the subcultural group and social movement of the Congo la Sapeurs (abbreviated as Société des Ambianceurs et des Personnes Élégantes, or the Society of Tastemakers and Elegant People), where the Sape’s moral code becomes a code for living rather than adhering to mainstream fashion codes. The colourful, eclectically constructed outfits include waistcoats, double-breasted tailored suits and hats, creating a juxtaposition between the usually harsh and dilapidated living conditions of such charismatic gentlemen. This can be viewed as transformational and a way of life; as Ndzube states, “dressing becomes a statement and form of resistance and pride: a survival mechanism to cover our fears, weaknesses… and insecurities, but also fulfils our fantasies, impersonating figures we admire or aspire to be”.

Ndzube’s understanding of the philosophies associated with ‘African Dandyism’ stems from the fashion pressures he himself feels at times, from the community in which he lives and the urban space in which he works. Informed by the writings of Afro-French philosopher Franz Fanon and other artists critiquing the influence of colonial culture and clothing in Africa, such as Yinka Shonibare, Ndzube wants to celebrate the influence of 19th century Victorian clothing but also “critique the troubling colonial inheritance that led African men to define and classify themselves in various ways” and “its association with consumption, appropriation, and exploitation.” 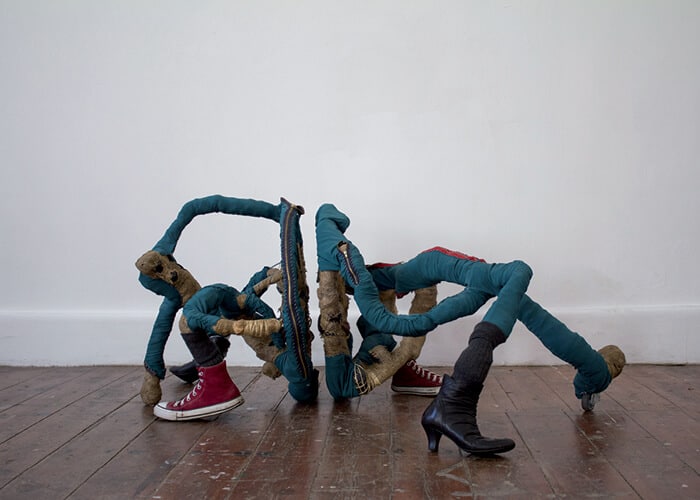 Struck by Simphiwe Ndzube’srefreshing organic creative process, the series of paintings he is submitting for THAT ART FAIR 2015 – ‘Untitled(Scream)’ – capture a personal account of frustration with emotive, conversational and relational expressions between each portrait. A striking blue polka dot mask conceals the race and identity of four silently screaming faces, contrasted against an aggressively pink background. Their suits are the same blue-polka-dot pattern as their spandex-like skin; their angst echoing Ndzube’s concern with the connotations and dennotations of the function and symbolism of the pressures of fashion, and particulary the suit, within society.

A tension is created through Ndzube’s use of contrasting colours, patterns and body language to reference his positive understanding and interest in these sub-cultural social movements; simultaneously exposing the pervading social, economic and political pressures of cultural discrepancies, material excess and those who are socially ostracised because of these expectations.

It is the lucidity of Ndzube’s work ethic, personal philosophies, integration of dancing and his artistic practice that I believe will propel him to continue to excel and explore a variety of creative solutions in the future.

Simone Heymans attained her Masters in Fine Art at Rhodes University in 2013. She has recently moved to Cape Town where she is setting up a creative studio.