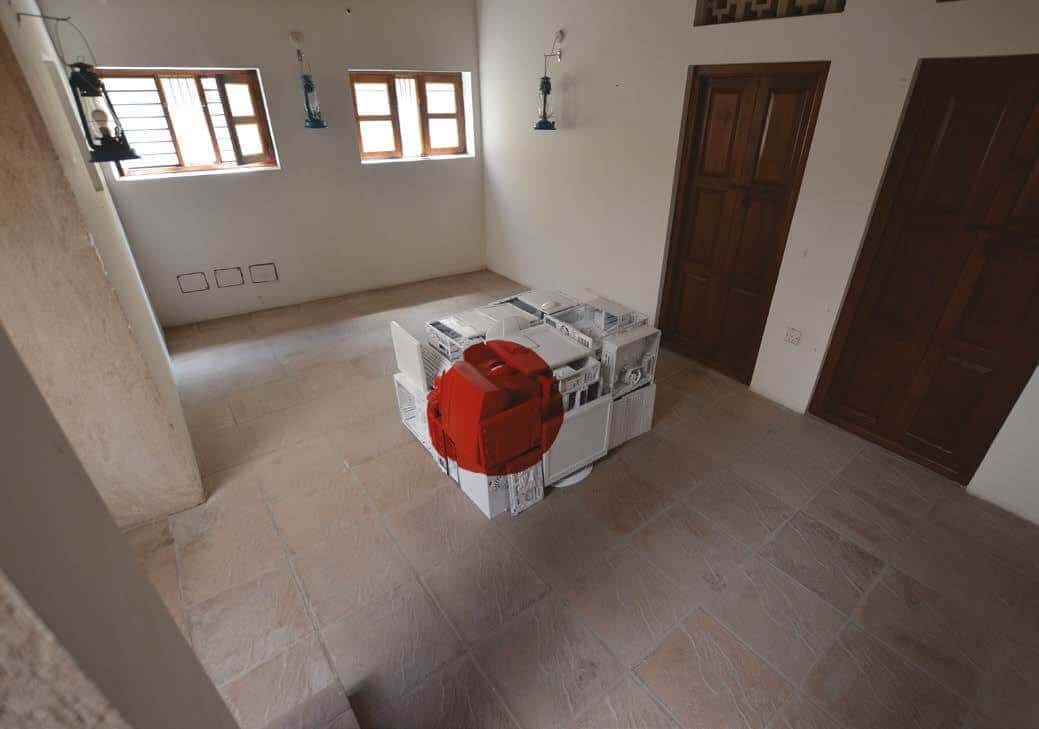 Ironic experiments. Or, one could say: irony in the experiment. The Emirati sculptress Shaikha Al Mazrou’s artworks continuously oscillate between serious irony and light-hearted experiments, a reading that might create an initial disorientation in the work’s interpretation. How does one have an ironical and experimental approach at the same time? It is well known that irony is not simply about ‘being funny.’ It is more like a constructive-critical attitude that, even when applied as a working method, does not exclude the carefree experimental spirit, which is another basic characteristic of aesthetically efficient artworks. 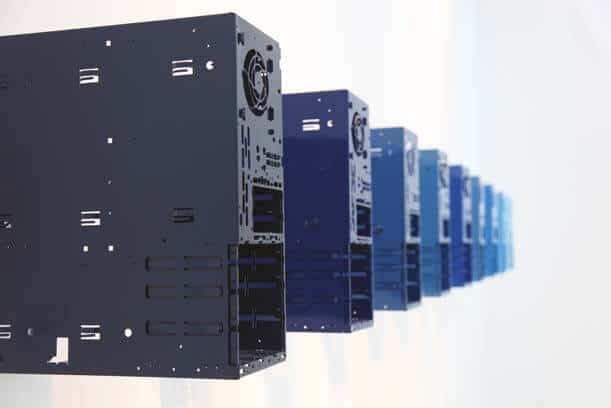 Still, it might seem strange to talk about irony in the case of a sculptress creating abstract works, since the ironic and critical approach is often considered a feature of, for example, figurative and socio-critical works of art, while non-figurative art pieces both paintings and sculptures – are recurrently referred to as ‘playful.’ Nevertheless, Shaikha Al Mazrou’s works are more appropriately defined in the aforementioned way, as inspiring explorations of form and volume, surface and void, material and tension. Aside from this, she constantly refers to key figures in art history, focusing specifically on the protagonists of the classical avant-garde. This interest is already evident in her early works, including a 2010 series created around the time of her graduation from the College of Fine Arts and Design at the University of Sharjah. Here, elements of computers – including cases and circuit boards – serve as the basis and medium for her installations and sometimes her ready-made-like sculptural pieces. In the work titled 189, colourful, printed circuit boards make up the composition. In the case of Blue Stack eight empty computer cases are neatly arranged in chromatic order. In both works the ‘computerness’ is deconstructed, the very ‘digitality’ of the machine is stripped bare, both physically and metaphysically, in order to ironically refer to the uselessness of material in our digital age. At the same time, this makes us aware of the dangers of the complete virtualisation of our world. Thus it is not by chance that the critical investigation continued in another piece from 2013, titled Red on White I. Composed of damaged computer parts – all of them painted completely white – one of the corners is painted red in such a waythat, from a certain angle, it becomes an exact circle. Both the title and the colour display bears direct reference to Russian Suprematism of a century ago, though in Shaikha Al Mazrou’s version the possibility of representing the essential aesthetic qualities of (abstract) art is analysed from an ironic post-digital perspective. 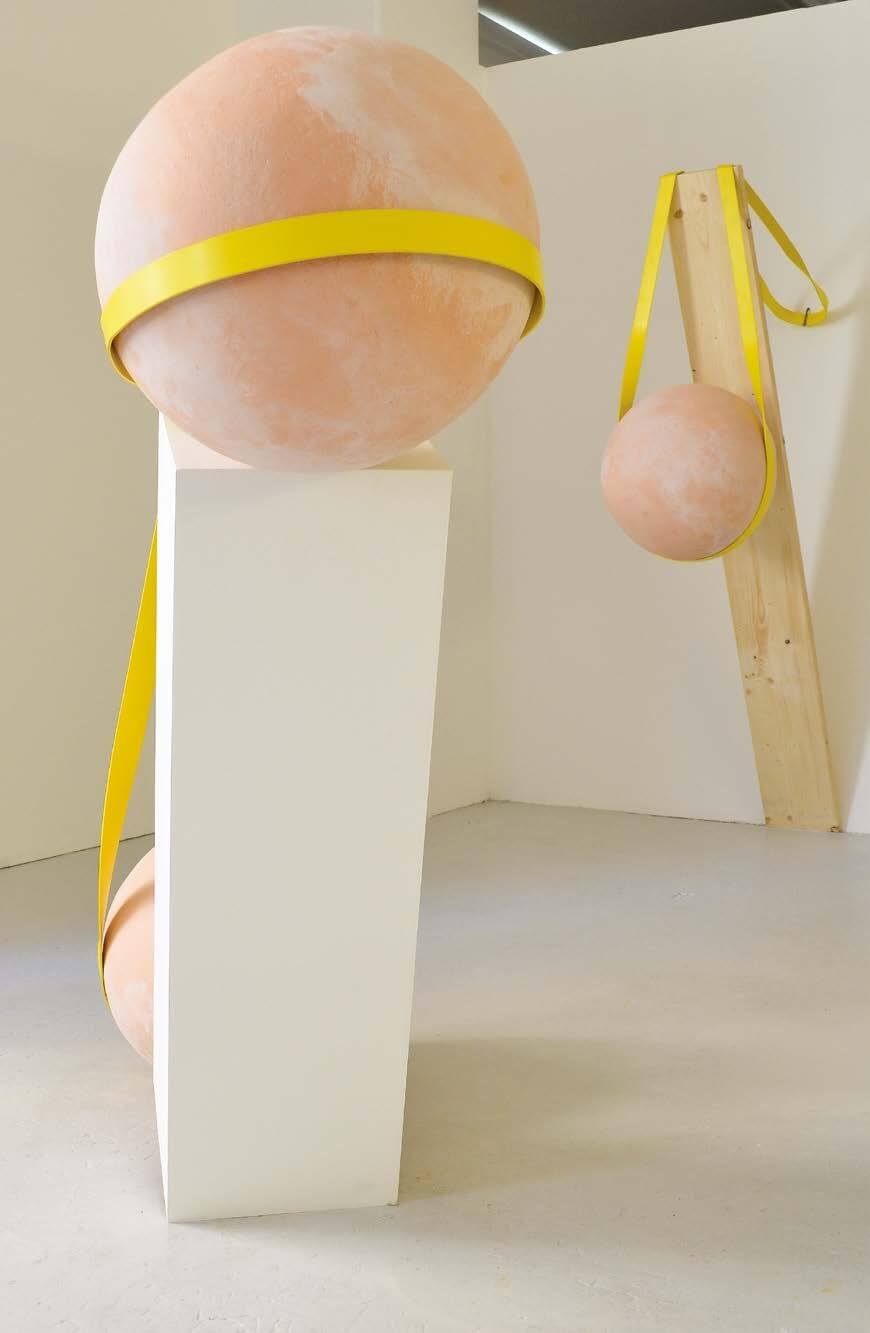 The artist’s interest in the image and sculptural vision is constituted from a certain standing point and is also manifested in another new work from 2014, commissioned by The Arab Fund for Art and Culture and installed in a public space in front of the Al Jalila Cultural Centre for Children. The visitor finds an abstract installation of colourful, parallel scaffolding poles. However, if seen from the right spot, the lines of tubes create the illusion of a cube, hence, not by chance the title of the work Stand here. Her choice of primary colours (red, yellow and blue) reiterates the avant-garde investigations of the essentiality of the artwork – just think of Mondrian’s late oeuvre for example – but Shaikha Al Mazrou’s question is more directed to the fine demarcation line between 2D and 3D, and, in fact, the illusion of both.

In the last body of work, titled Tension (2014 – 2015), created while still finishing her MA studies at the Chelsea College of Fine Art in London, the artist continues her ironic experiments, questioning some of the most elementary sculptural qualities, including volume and weight. Volume, as the quality that defines spatial amount and display of the material in relation to void and weight, at first seems to be a standard feature of the material; however, this is where Shaikha Al Mazrou is fooling the viewer. The seemingly heavy stone-looking balls, balanced with what appear to be elastic ribbons are, in fact, ceramic balls and the ribbons are made of rigid metal; creating a sense of mental and sometimes physical tension that the viewer feels when observing the works. The final result is not a cheap illusion for the sake of deceiving the public, much more the aesthetic demonstration of the power of balance and ultimately the essence of sculpture.

Dr. Zoltán Somhegyi is a Hungarian art historian, holding a Ph.D. in Aesthetics. Based in the United Arab Emirates and teaching at the University of Sharjah, he is the Middle East Editor-at-Large of ART AFRICA.