The photorealism of the show is intended to bring a cinematographic sense of tableau or theatre to the artists’ stated desire to depict a world in crisis, with populations fleeing from cities to the country to escape a raft of social, economic and gender-based problems.

In practice, however, these strangely alienating images have much more in common with the photorealism of advertising and graphic design than they do with a critical theoretical agenda, with not enough individuality of technique or conception to distinguish the work from more commercial realms. The numerous images of battle helicopters, for instance, lifted from any number of Hollywood films about Vietnam or the Gulf wars, fail to convey a sense of dramatic critical inflection. Instead, they appear simply as a photorealist painting of a familiar cinematic tableau. 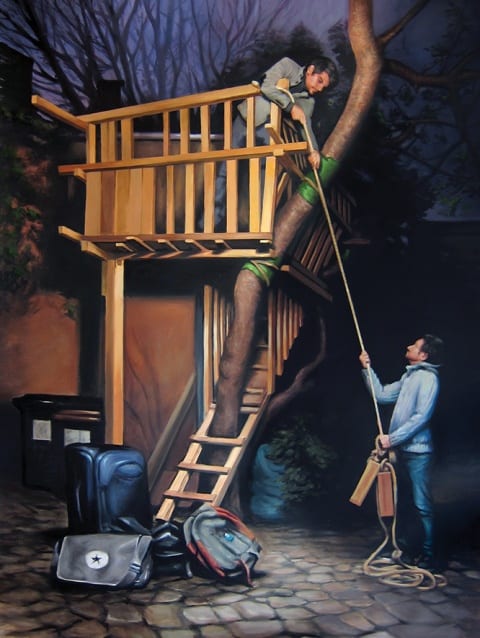 Similarly, a prominent image of a prostrate man being dragged by his tie down a busy city street in which only the legs of other pedestrians are visible, by a leggy woman in high heels, fails to convey a critique of modern gender relations, only a painted copy of what might be an advert for perfume or shoes. This curiously anomalous show certainly does not visually bear the weight of the social critique and ironic positioning claimed by its publicity, neither in the photorealism of its technique or in the depiction of its themes and ideas.  James Sey is a Research Associate in the Research Centre, Visual Identities in Art and Design, Faculty of Fine Art, Design and Architecture, University of Johannesburg.