‘Mastry,’ Kerry James Marshall’s survey exhibition at the Museum of Contemporary Art Chicago, feels like a full-circle moment for the city, putting into sharp focus the stakes of the representation of bodies of colour.

Chicago is experiencing a steady rise in gun violence that may be related to the institutional chaos in the wake of the October 2015 release of a video showing the police shooting Laquan Macdonald, an unarmed black teen. The video of Macdonald’s murder was looped countless times on news stations and web platforms, an endless falling of a young, black male’s body: the image drew protesters out onto the streets. 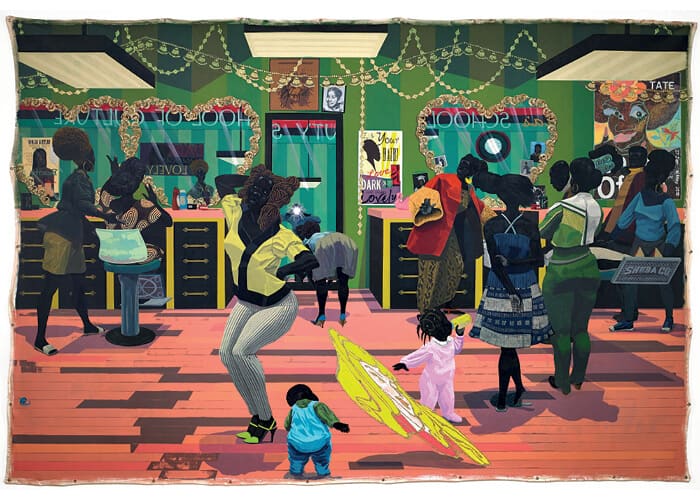 Kerry James Marshall, School of Beauty, School of Culture, 2012. Acrylic on canvas, 274 x 401 cm. Collection of the Birmingham Museum of Art. Photograph: Sean Pathasema. All images courtesy of the artist and the Museum of Contemporary Art Chicago.

Around the same time that the scandalous news of the city’s cover up of the video broke, the Art Institute of Chicago unveiled its new contemporary art galleries prominently featuring four white, male American artists; a single collection worth $500 million that will remain on view for twenty-five years, as stipulated by the donors. If the gift has turned our focus to the identity of the artists, it is because the metrics of visibility are evidence of inequality that we resort to using in socially volatile moments. For Kerry James Marshall, the ‘being seen’ that drives his gurative painting insists – through a proliferation of counter-images – on not just the surviving, but also the thriving black body.

Marshall is often characterised as generous in his speaking, writing and engagement and ‘Mastry’ treats its audience with that same generosity. Jointly curated by Dieter Roelstraete, Helen Molesworth and Ian Alteveer, the exhibition is smart and unpretentious. The opening room contains Marshall’s still unnerving 1980 work A Portrait of the Artist as a Shadow of his Former Self, where Marshall set out what would become the terms of his intervention: to meet the power and authority of the Western canon with a canon of his own making. By the 1990s, these paintings were heroic, large and populated with monumental black gures – a black made by paint that is never diluted or mixed. His canon includes folk, kitsch, glitter, text, comics and music notation. It includes (heterosexual) sex and romance. ‘Mastry’ clearly argues for the success of Marshall’s reprisal of historical painting – he retaliates with descriptions of everyday scenes in African American civic society: boy and girl scouts, BBQs, schools, beauty shops, and living rooms. In her curatorial essay, Helen Molesworth elaborates on this idea of reprisal, deftly describing the advantages and limits of anachronism-as-critique. 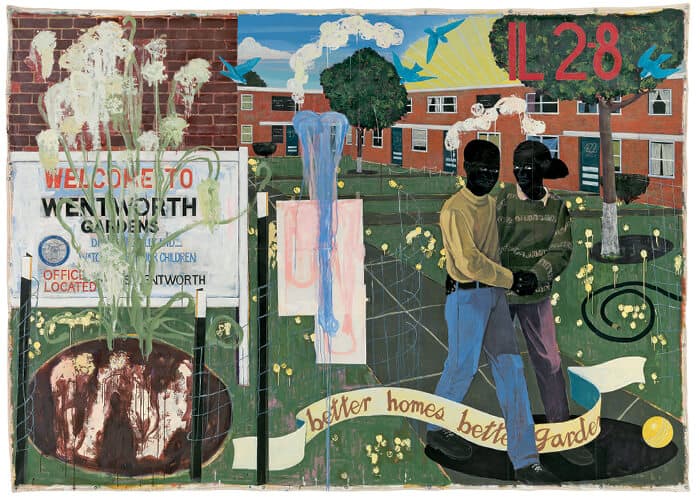 The essay and exhibition both demonstrate the tension between Marshall’s identity as a painter or an artist who uses paint. I would tend toward the latter designation based on Marshall’s insistence on a clear message, which includes macro anti-colonial statements such as in The Land that Time Forgot (1992): a darkened South African landscape with an arrow-struck Springbok, the Voortrekker Monument, gold ore and a superimposed outline of Jan van Riebeeck as an imposter gure. In a more recent work, Still Life with Wedding Portrait (2015), the black hands of gallery workers are shown installing a portrait of Harriet and John Tubman. While three of the four hands wear the gallery-grade white gloves, one hand wears a black leather glove (we read from the label) as homage to the salute of Tommie Smith and John Carlos during the 1968 Summer Olympics. ‘Mastry’ also includes his light box comic strip works, but the installation component, such as in his 1998 exhibition ‘Mementos,’ is nearly absent, save for a corner where we are invited to sit with piles of magazine cut outs and other media objects from Marshall’s own archive. A painting on an adjacent wall, SOB, SOB (2003), clarifies the message of the installation. In it, a young woman is seated next to her media source, a fictional book titled Africa Since 1413. The thought bubble above her describes a curse and/or cry. 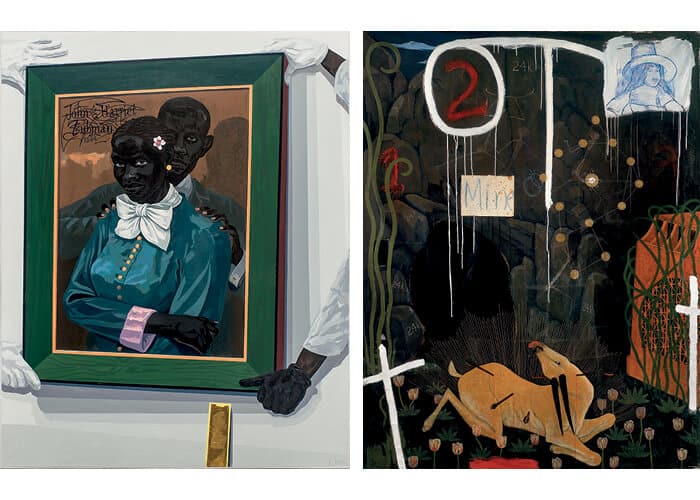 Last November, Marshall participated in a focused conversation with W.J.T. Mitchell and Irena Haiduk on the image canon of museums and art history at the University of Chicago. In his opening remarks, Marshall reiterated that “image is everything.” Haiduk responded that she works against this insurmountable regime of the image and instead embraces the iconoclasm found throughout art history.

Haiduk also pointed to the impossibility for most artists to achieve not only the visibility that Marshall now has, but also the luxury value of his work in its monumentality and painting medium. The conversation was both cross-cultural and multi-generational: Haiduk paying homage to an iconic artist who gave her something to work with and against. As I walked my students through ‘Mastry,’ discussing the historical import of his intervention, I was taken less by the abundance and scale of the images, but the integrity and devastating beauty of each one.

Delinda Collier is Associate Professor of Art History, Theory and Criticism at the School of the Art Institute of Chicago. She is the author of Repainting the Walls of Lunda: Information Colonialism and Angolan Art, (2016).

‘Mastry’ by Kerry James Marshall runs until 25 September 2016 at the Museum of Contemporary Art Chicago.