MELODIES AND PHRASES: In Conversation with Stompie Selibe

ART AFRICA had the opportunity to sit down with Daniel Stompie Selibe in the lead up to Cape Town Art Fair 2017 and discuss his work which will be featured at Candice Berman Fine Art Gallery, Booth D8. 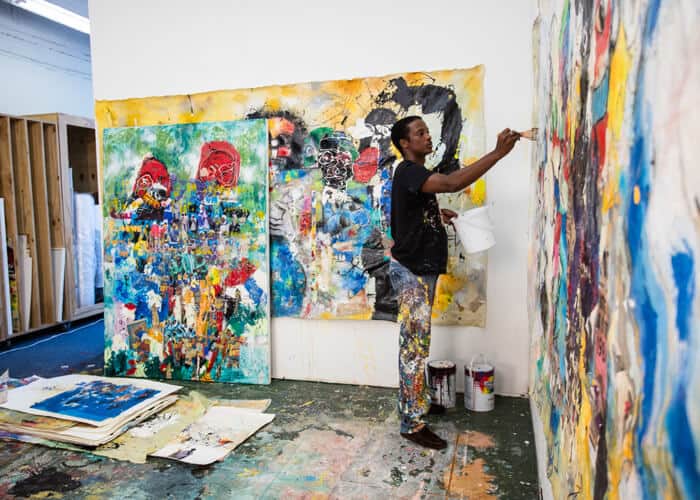 ART AFRICA: You were born in Soweto in 1974. As we all know, Soweto has a very rich musical history. In what ways has this environment channelled your practice?

Stompie Selibe: I grew up witnessing the devastation of my community in Soweto in the early 80s. At the same time, I also saw and heard the richness and strength of the community. Everyone was so connected to each other, there was a real sense of community and art in the midst of that. We supported each other to enrich our individual goals. If talent was discovered, it was supported, regardless of opportunities. There was integrity, dignity and the ability to develop a sense of self in the midst of a supportive communal identity.

The system at that time, with the anti-apartheid movement, was to change things and to support young people, women, and girls – it created a sense of pride. I learned and experienced how important it is to always give. I developed a strong sense of the world around me, and the importance of giving expression to life experiences. I also developed a sense of how important it is to live in, develop, contribute to and embrace a racial and multi-cultural world. It was in Soweto that I became and remain very interested in exploring who we are, both racially and culturally, and engaging who we are as a democratic country.

I have been influenced the most by the musicians in my community, Stompie Manana and Denis Nene. They have been and continue to be mentors to me. I learn a lot from them about how to explore music, art, and democracy.

From what I understand, you spent some time in 1998 making field recordings in Namibia, Angola, Cuba and Belgium. Could you tell us a bit more about these? What were you recording and why?

I was introduced to the curator Fernando Alvim by my good friend Bie Venter, and then to the musician Victor Gama. Fernando and Victor were working around the world, using music to address conflict and violence. They were especially interested in Cuba, Namibia, South Africa and Angola. We did a four-to-five month tour, researching and sharing music. We later did a recording in Belgium. This was the first time I travelled out of South Africa; it was 1998, four years after our first elections. One thing that touched me deeply was seeing how powerful music is as a language – it can heal, bring people together, and give us the tools for greater communication. 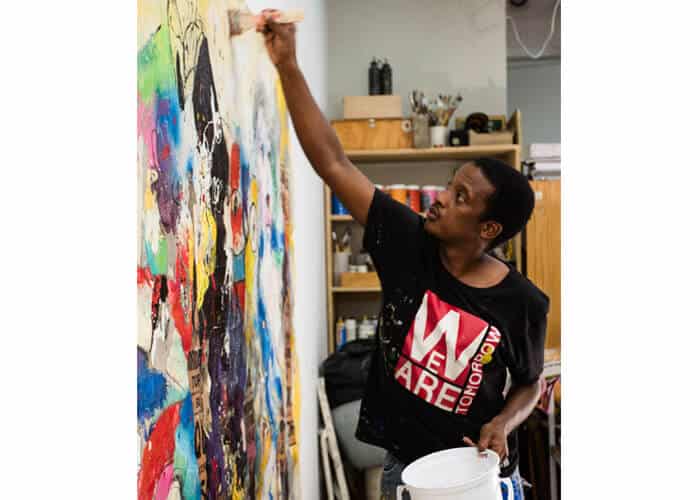 As modes of expression, is there any distinction for you, between music and visual art?

When you play music you play something that is structured; it has a beginning and an end, it can be written, it can be therapeutic, it can be experimental as well as expressive, it can bring deep attention to layers of emotions and experiences and give form to unknown thoughts.

Visual art has some similarities. When you learn to make art it also has a certain structure — it has form, shape, texture, perspective, you experiment and form images. It also expresses deep emotion and helps new ideas emerge. They work well together. Working with them both helps me develop all kinds of melodies and phrases, musically and visually. They are intertwined, and give you another way to look at and experience things, allowing you to make a mess, re-construct it, make another mess, and from that make images or sounds that have meaning.

You’ve described your process as impulsive, almost therapeutic. Aside from the act of painting, what is your relationship to the material? How do you go about choosing colours, for example?

My process in art and music is improvisational. I choose colours based on a feeling, on inspiration, playfulness and what is exciting to me to create and respond to. In this way it is therapeutic, because I create and erase, I travel an emotional map of my inner self and myself as a member of my community, South Africa and the world.

In 2001 you trained in Art Therapy at the Art Therapy Centre in Johannesburg. When speaking about art therapy, you mention the need to not impose oneself, to find a middle ground, “It’s important not to give advice, not interrupt or to try and fix.” Could you elaborate on this from your own experiences as an artist?

I have been shaped by different principles in Art therapy and by different methods. We all have life experiences, and live in particular places in particular times. In South Africa we are in the process of building a new nation, this has been and remains very important to me in my development. Being involved in building communities, helping people grow and develop, express themselves and discover their own creativity has been a part of my life since I was a teenager. I have worked with HIV+ families, young people, refugees, women in rural areas and people who are struggling to find themselves and their place in the world. I have worked at Constitution Hill, Nkosi’s Haven and with Big Fish, giving people tools to develop their own lives. Enabling people to express themselves as creatives and worldly people is important to me and to building our nation. Building is a creative act, so we all need the tools that can help us create and heal, at the same time. Creating art and building our country have a lot in common; they each demand that we listen, that we give, that we collaborate and explore together. 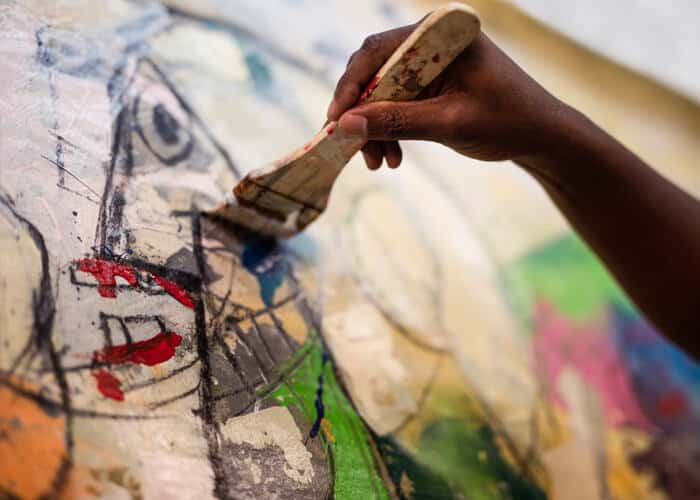 You’ve been quoted in saying that when “dealing with sounds and visions we are in the midst of the sacred self… We are engaged in a sacred transaction of which we know only a little, the shadow not the shape.” Is it important for you to try to understand the shape, or is the transaction itself more important, to be a part of it?

My creative journey, whether in music or art is filled with learning, experimentation, responding to current issues, and the desire to contribute and participate. Creating images for me brings development. It can bring us together as South Africans to explore who we are to each other as fellow builders of this country, with a shared past. My art draws on my emotional, spiritual, and political sensibilities, as well as my commitment to the growth of our communities. For me, being an artist is an opportunity to explore the many voices, perspectives, and histories that are both mine and a part of this country. As an artist I have had a chance to see how other
countries try to face the same challenges that we have, how people shape and are shaped by their worlds, and how we can look for better ways for us to all live together.

I like making work that invites people to question things, go new places, be uncomfortable and break out of their boundaries, to engage with and learn from people who are different from yourself. That is how we can create something new.

Working with Candice Berman at her gallery and going to Cape Town Art Fair has been a wonderful opportunity to do that with new communities, for us to get to know each other meaningfully in new and creative ways.

Stompie Selibe’s work has also recently been featured in the January/February 2017 edition of Habitat magazine.