Born in Bloemfontein, South Africa in 1986, Larita Engelbrecht has been involved in academia for most of her life. In 2009 she received a BA in Fine Arts from the University of Stellenbosch, followed by an MA in Visual Art three years later. In addition to her work as a visual artist, Engelbrecht is now a senior lecturer at Cape Town Creative Academy. This proximity to knowledge, or more accurately, the systems and processes that have come to define and transpose knowledge, forms the basis for her latest body of work ‘Met Ander Oë,’ which will be exhibited at EBONY Curated in Cape Town from the 1st September until the 29th October. 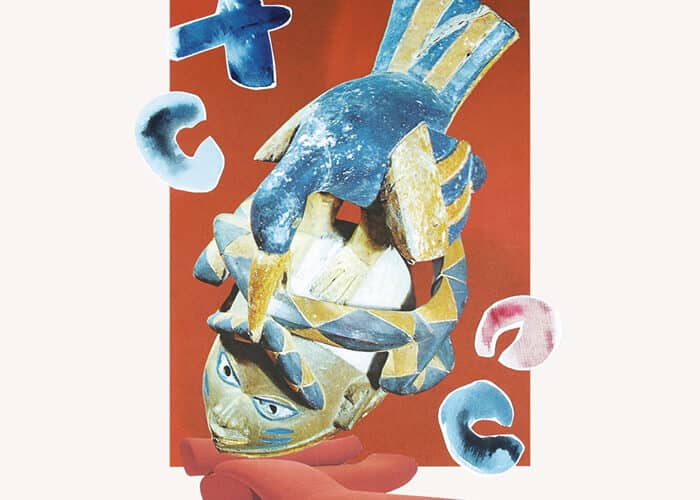 Engelbrecht began working in collage during her final undergraduate year at Stellenbosch University in 2009. Over the next three years she worked at the university’s main library, where she began to collect discarded library cards. “Once upon a time, these cards were used to remind one of a book’s return date, before systems were digitized,” she explains, “I collected these cards from various Afrikaans and English literature and history books while I was working at Stellenbosch University’s main library.” One of these discarded cards belonged to the book Met Ander Oë, a selection of writings by the noted Afrikaans author and poet, Uys Krige. Directly translated, the title of the book means ‘Through Different Eyes.’ Engelbrecht’s subsequent adaptation of the title speaks worlds about the processes inherent in her cut-and-paste aesthetic, which functions as a medium between a variety of source material. Like the discarded library card, these fragments have been removed from their original context. As a result, they begin to speak to one another – a process that allows for fresh and unexpected perspectives. 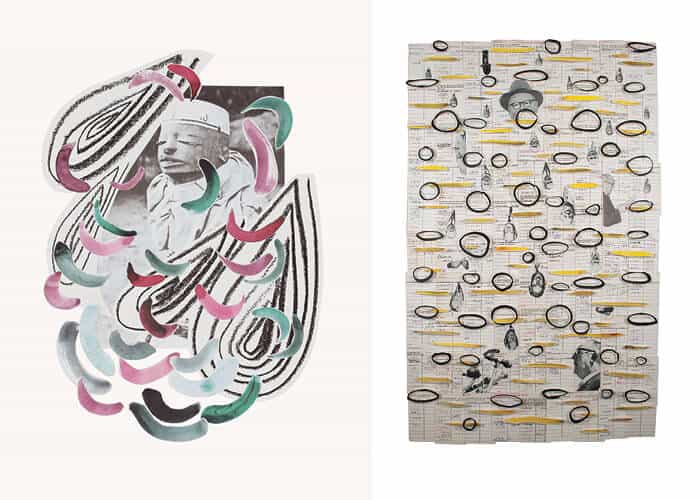 “I find collage an attractive medium because it is both intuitive and restrictive,” said Engelbrecht, “You select the images with your gut, but you are restricted by what you can get – what is available.” For ‘Met Ander Oë,’ the artist draws on the representation of African masks within printed books from the 1960s. These images were then juxtaposed with images found in contemporary high-gloss magazines, with the artist’s own mark functioning as needle and thread to bring the two elements together. As a result, her images are shaped by a certain premeditated understanding of the selected forms, drawing parallels between the representation of African masks in the books available and contemporary consumer culture. 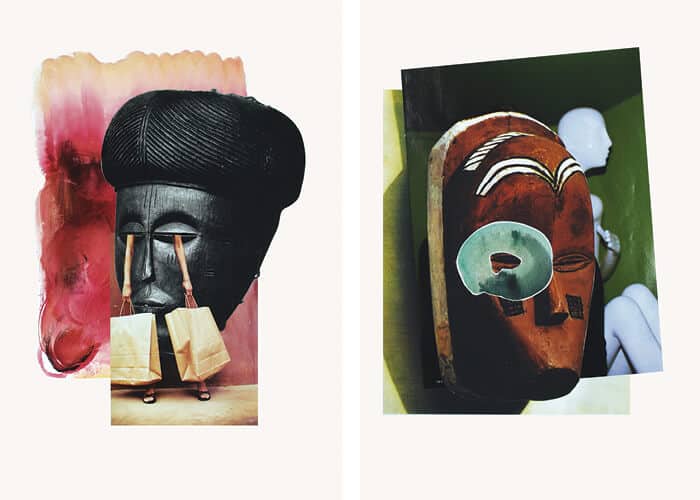 This concern is made explicit in the artist’s statement, where she references Associate Professor Harry Garuba’s (Centre for African Studies) paper, On Animism, Modernity/Colonialism, and the African Order of Knowledge: Provisional Reflections. Central to this paper is the opening excerpt from V.Y. Mudimbe’s The Invention of Africa, which speaks to the nature of colonial influence in laying the foundation that placed colonial practice at the pinnacle of ‘advanced’ society:

“Because of the colonizing structure, a dichotomizing system has emerged, and with it a great number of current paradigmatic oppositions have developed: traditional versus modern; oral versus written and printed; agrarian and customary communities versus urban and industrialized civilization… In Africa a great deal of attention is generally given to the evolution implied and promised by the passage from the former paradigms to the latter.” 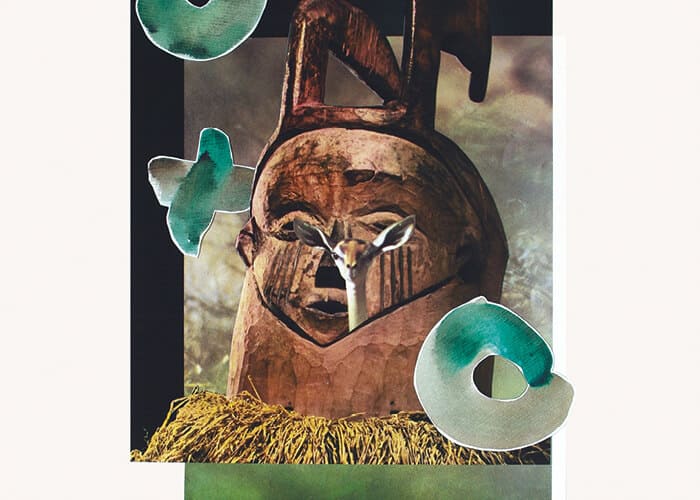 Larita Engelbrecht’s work serves to remind us that much of this printed media – the books from the 60s about masks – like the high-gloss magazines that promote a ‘modernised’ way of life, were constructed within a particular framework, one which places the colonial agenda at the forefront of society, whilst circumventing the significance of alternative modes of thought. Itself an item ready for consumption, Engelbrecht’s work is able to confront our preconceptions through her reference to multiplicity, yet beneath this is an acknowledgment of the pervasive effects of the structures of knowledge which seem to blanket even the argument itself. How we intend to navigate this conscription is an open book.

Larita Engelbrecht’s solo exhibition ‘Met Ander Oë’ will be on show at EBONY Curated, Cape Town, from the 1st September until 29 October 2016.