Modern or Contemporary: New Trends in Artistic Practices in Africa and its Diaspora

in News Articles 2013
Share on facebook
Share on twitter
Share on email
Share on whatsapp
SAVAH & ISANG present a talk by Prof Barbaro Martinez-Ruiz
‘Modern or Contemporary: New Trends in Artistic Practices in Africa and its Diaspora’
Tuesday 1 April 2014
The lecture will touch upon some of the issues discussed by George Marcus, as symptomatic of new approaches in anthropology. He suggested that the off-stage green room is an apt metaphor for the increased dialogue across disciplines, particularly between anthropology and African art history. The green room symbolizes a XXI century experience of globalization that focuses on site-specific performance art and ethnographic encounters. The lecture will cover a global debate over Western representations of African and African diaspora art, with special attention to issues such as the manner in which aesthetic concepts, museum politics, art display, colonialism, identity practices and nationalism intersect across a global diaspora. It will explore questions of representation of contemporary African art and its proliferation in art collections of major institutions around the world, and will query the dichotomy between viewing ‘African’ artistic practices in the diaspora as either influenced by cultures of the West (‘modern’) or as non-Western cultures equated with primitivism (‘traditional’).
Details:
Tuesday 1 April 2014 at 18:00
TH Barry Lecture Theatre, Iziko South Africa Museum, 25 Queen Victoria Street, Cape Town
RSVP: Shameem Adams at sadams@iziko.org.za / 021 481 397 by 28 March 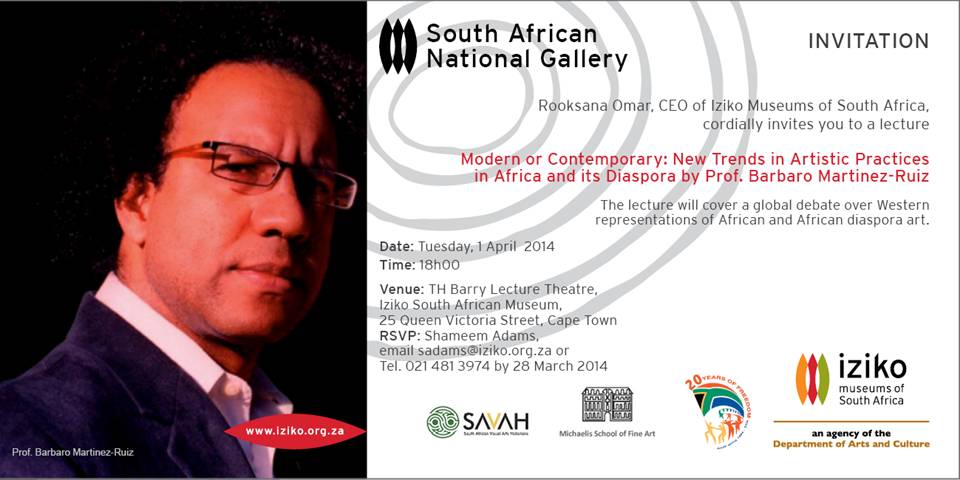 About Barbaro Martinez-Ruiz:
Barbaro Martinez-Ruiz is an Art Historian with expertise in African and Caribbean artistic, visual, and religious practices. Born and raised in Cuba, Martinez-Ruiz, after graduating from Havana University, taught Art History at Havana’s High Institute of Art for five years prior to going to the United States. Since arriving in the US, he has lectured frequently on African Art and Afro-Caribbean religions and taught a range of graduate and undergraduate courses on African and Afro-Caribbean writing systems. Additionally, he has both curated exhibitions on contemporary and African art, and presented his own multimedia work in solo and group exhibitions in New York and Alabama. Martínez-Ruiz completed his masters and doctoral studies in the History of Art department at Yale University in 2004. He served as an adjunct professor at Rhode Island School of Design from 2002-2004, and joined the Stanford Department of Art and Art History in 2004, and in 2013 the History and Theory of Art Department at the Michaelis School of Fine Art, University of Cape Town.
Martínez-Ruiz recently published a book on systems of graphic writing in central Africa and Cuba titled ‘Kongo Graphic Writing and Other Narratives of the Sign’, Temple University Press, 2013 (English) and ‘El Colegio de México’, 2012 (Spanish). Other books include a reframing of the work of Afro-British artist, Faisal Abdu’Allah (‘Faisal Abdu’Allah: On the Art of Dislocation’), Atlantic Center of Modern Art Press, 2012 and ‘Art and Emancipation in Jamaica: Isaac Mendes Belisario and his Worlds’, Yale University Press, 2007, for which he received the College Art Association Alfred H. Barr Award. Current curatorial projects include ‘Things that Cannot Be Seen Any Other Way: The Art of Manuel Mendive’, an exhibition and publication on themes of creolization, hybridity and syncretism in the work of Afro-Cuban artist Manuel Mendive at the California African American Museum, Los Angeles and traveling to the Frost Art Museum, Miami in the fall of 2013 and winter 2015, and ‘Digital Objects: A Retrospective of Chuck Close’, an exhibition and publication examining the work of American artist Chuck Close that will open at the Centro Atlántico de Arte Moderno (CAAM) in the Canary Islands in early 2015. Furthermore, appointed senior editor in 2013 of the ‘Cuban Studies Magazine’ at the Institute of Afro-Latin American Studies, Harvard University and from 2015 – 2017 selected as researcher for the ‘Pacific Standard Time Initiative’ at The Getty Research Institute, and guest curator at the Museum of Latin American Art, Los Angeles California
Biography from: