in CONTEMPORARY ART, FESTIVAL, INTERVIEW, MUSEUM, PHOTOGRAPHY, VISUAL CULTURE
Share on facebook
Share on twitter
Share on email
Share on whatsapp
ART AFRICA catches up with Standard Bank Young Artist of the Year 2016, Mohau Modisakeng to discuss his recent body of work at the Grahamstown National Arts Festival 2016, his inclusion in the public collection of the Zeitz MOCAA and some of the underlying themes in his work. 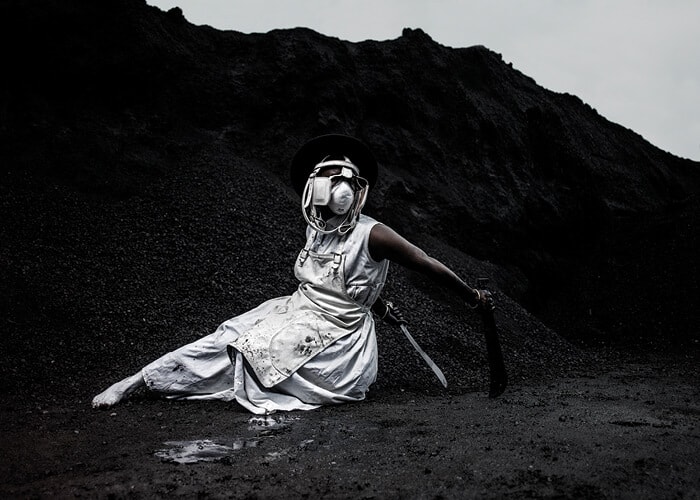 ART AFRICA: Your first solo exhibition, ‘iButho’ (Stevenson, 2010), was a continuation of the work you produced for your graduate exhibition at Michaelis in 2009. Your current work follows the same trajectory, with many of the underlying themes still intact. How would you say your work has grown since then?
Mohau Modisakeng: I think all my newer work somehow reflects and refers to previous work. The themes I was concerned with in my graduate exhibition and the subsequent exhibition with Stevenson in Cape Town are still very present. My current work draws from my personal experiences and my own reflections on my values of family and community; values that are still intact today…
What changes is the form the work takes, but the ideas and concerns are only changing in the sense that the work resembles another visual narrative. The logic and structure are still the same.
You’ve worked in a wide range of mediums, including sculpture, performance, photography, installation and video. What informs your choice of medium and how much of this process finds its way into the final product?
I believe that I am still evolving my student work. Each opportunity to make a new work relies on the same ideas that might have been expressed in Qhatha, or my frames series. But with each chance the same ideas tackled in one work evolve to take on another form in a new work.
I think I am able to work this way because different media allow for the freedom to investigate the same concepts and ideas and expand them into different forms. Photography allows for new possibilities to cast light on the same subjects and themes that I’ve been preoccupied with. 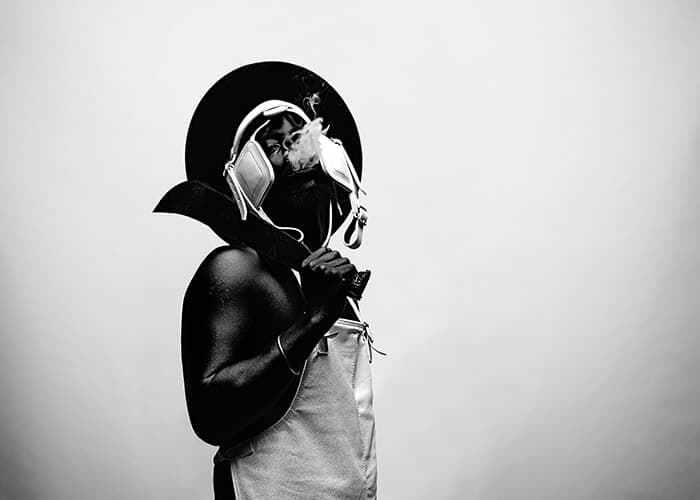 You use your own image in much of your lens-based work. At the same time, the symbols you use are cultural signifiers. Please tell us more about this relationship, between the personal and the collective?
The collective cultural narrative of South Africa has recently been defined by the political project of national transformation over the last two decades. The bulk of my life has been lived within these two decades, so in some sense my work reflects on my experiences and observations growing up in a South African township. Within that environment the legacy of apartheid is still ever-present, and still influences how people grapple with their view of the world, their surroundings and their selves. When you put yourself at the foreground of your work, when you portray yourself as an individual and a person, your self representation can resonate with others that share the same environment, world view, and social experience.
Our history has been defined by our experiences with society according to a racist system of classification and segregation. So all black South Africans, at least in our imagination, live on the same side of history. When the preoccupation is to represent an aspect of your own lived experiences as a black person in South Africa, you are also consequently preoccupied with the history of the lived experiences of all black South Africans.
Your work draws from a variety of historical and contextual references that have specific significance within South Africa. How do audiences relate to your work outside of the country? Have there been any interesting or unexpected responses to come out of your exhibitions abroad?
The most unexpected responses have come from a South African audience. White writers writing about the work of black artists, most of whom draw from their lived experiences – which are historically removed from the white public. The legacy of separate development means that there is an inherent distance between South Africans of different races.
This distance and the general history of difference and indifference often manifests in distortions and misreadings under the innate prejudice that informs white writers trying to access lacking narratives. There is a historical blind spot that becomes a breeding ground for the cultural distortions attributed to colonialism and apartheid that still find expression in the work of white South African writers.
I am yet to experience the same kind of prejudiced readings forced upon my work locally outside of South Africa. Old racist attitudes amongst South Africans still devide and confuse “us,” especially in an art world defined by white patronage. 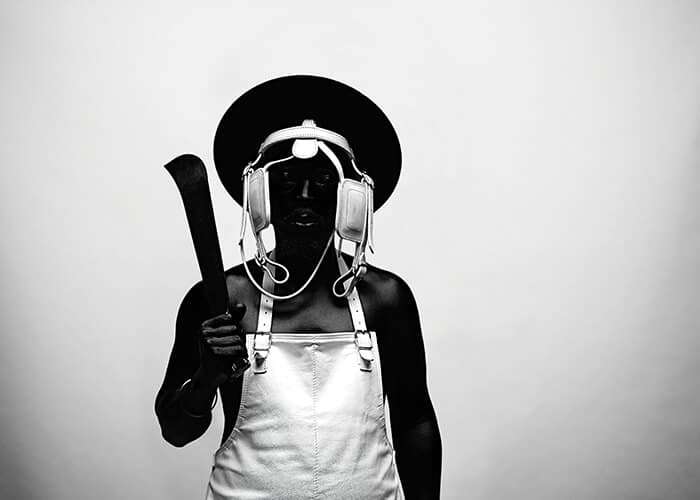 Your work already forms part of the public collection of the Zeitz MOCAA, a space that will no doubt play a major role in the reception of contemporary art from Africa globally. How has your work been affected by inclusion in this important collection and what effect do you think the Zeitz MOCAA will have on the local and African art scenes when it opens?
My work does form part of the collection but I think an interesting question is what informs the said collection. As a cultural and political practice how do the custodians of that collection deal with the very relevant questions affecting artists, such as the historic cultural exclusion of black artists from institutions such as universities and museums, and what about the exclusion of black cultural forms from global cultural discourses? With a history like ours how does the institution intend to address the historic imbalances in representation? How does the institution deal with its responsibility to its custodians? Not the rich and powerful in the art world, but the socially vulnerable that feed an economy which transforms artworks into commodities.
This interview was first published in the September 2016 edition of ART AFRICA magazine, entitled ‘BEYOND FAIR’.