The exhibition uses the artist’s self-avowed sense of ‘visual anthropology’ in mixed media, to document various aspects of his life in South Africa. Key to this is a remembrance of his late grandmother, who gives her name to the show.

Langa’s characteristic abstracted primitivism is fully evident in the spread of works, which extend back over the past ten years. What is also apparent – from the powerful brutalism of the figures in Night Life 1 and 2 (2002), to the idyllically childlike landscape of After Muafangejo (2011) – is that the artist has refined his technique while retaining the ritualised essence of the work.

The bold and simple lines and strongly humorous strain in the artist’s portraits are well represented here, as are sophisticated examples of the artist’s use of collage. Works such as Millie (2011–12) and Xolani (2008) demonstrate quite different palettes and approaches to mixed media in the collage form, and both are fine examples of an evocative ‘anthropological’ visual quality. 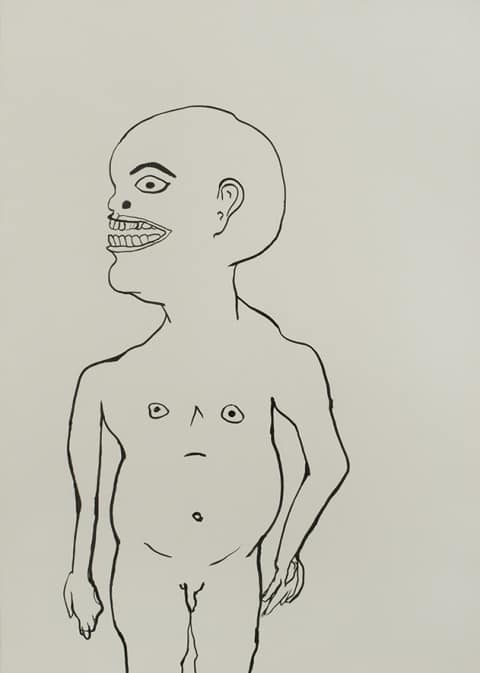 Another theme running through disparate works on the show, and again in keeping with a ritualistic, almost shamanic approach, is that of naming. Several works from the 2000s show lists of painted names, intricately listed on the paper, and carefully designed. The long lists of personal names and, in a work such as Xavier (2003), an extended set of word associations, bring together incantation and tabulation of the artist’s personal life, in compellingly thought-through and yet deceptively simple, colourful tableaux.

Finally, more recent works such as Lesiba (2010) and Blue Lagoon (2012) are more formally abstract, working with a deep palette, and incorporating multi-coloured threading. The dendritic quality of these works sums up quite profoundly the rhizomatic life of a nomadic artist. The show as a whole expresses the cycle of a return to the country of his birth to find things changed – not quite able to find the deep roots he once had, and yet finding roots after all, and doing so with idiosyncratic humour and a profound grasp of his techniques.

James Sey is a Research Associate in the Research Centre, Visual Identities in Art and Design, Faculty of Fine Art, Design and Architecture, University of Johannesburg.