in News Articles 2013
Share on facebook
Share on twitter
Share on email
Share on whatsapp
David Krut Projects in Parkwood, Johannesburg presents ‘My World’, a solo exhibition by Senzo Shabangu which officially opened on Saturday the 3rd of October 2015. This solo exhibition is the fourth under Shabangu’s belt, and his second within this main gallery space. The exhibition spans an assortment of mediums – from ink to charcoal drawings, and from linocuts to lithograph prints in limited edition. Khehla Chepape Makgato, an independent artist and arts writer, contributes his voice to the exhibition.
In order to punctuate the aura of the opening day, it is unavoidable and fitting to quote from guest speaker, Eric Miyeni – South African-born writer, actor, radio and television personality – as part of his address, read And I Still Rise from the book of renowned poet, Maya Angelou.
“You may write me down in history
With your bitter, twisted lies,
You may trod me in the very dirt
But still, like dust, I’ll rise…”
Miyeni’s opening remarks couldn’t have been more apt; especially about a young man born in Mpumalanga, whose dream was to become a pilot but who instead ended up being chosen to be an artist by a turn of fate. These words, resonant of Angelou’s poetry, are powerful in that they trace the struggles, the rises and the falls of Shabangu’s professional art career – which spans almost half a decade. Having graduated from Artist Proof Studio in 2008 with a fine art qualification in printmaking, Shabangu became the inaugural recipient of the David Koloane Award in 2010. The award is intended to promote the Bag Factory’s philosophy of learning through creative exchange, and includes a residency within the Bag Factory studios.The David Koloane Art Residency resulted in a group exhibition alongside international visiting artists. Suffice to say it was through this residency, and the exhibitions’ ironic title, ‘Losing Virginity’ that Shabangu was afforded a pinnacle to his art career. 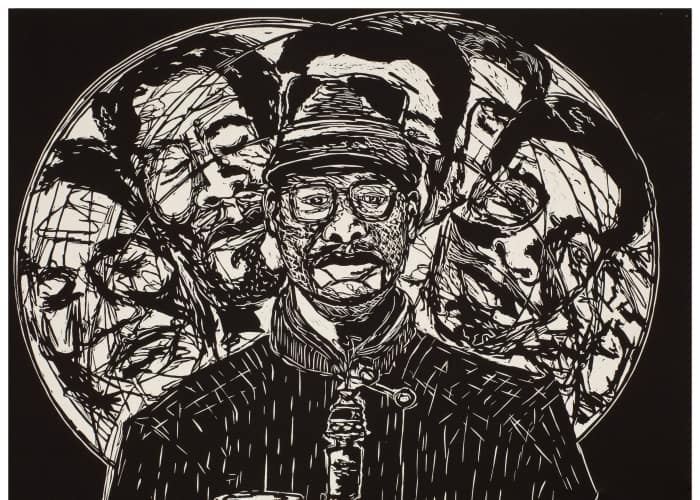 Senzo Shabangu, Stand for Yourself, 2014. Linocut (detail).
Observing Shabangu’s work, one realises that it has been and continues to be among other things, an approach to the problem of living. From his first solo exhibition- entitled ‘Naked Pressure’ – to the latest, ‘My World’ Shabangu has engaged himself using his art into confronting day-to-day struggles faced by young people. His work engages, in particular, those from remote areas who as a result of economic immaturity within their regions of birth, have migrated into the cities of greater magnitude such as Johannesburg in search of a better living. As viewed by New York-based arts writer Calvin Tomkins, “The pressure to succeed in the marketplace, to establish a unique artistic ‘brand’ or style, may clash with the need to accept failure in pursuit of a deeper vision. It takes a strong character to reconcile or ignore these tendencies, and this brings us to the question of self-invention.” (Tomkins, 2008, p. xiii). There is no doubt this young artist has been constantly embroiled in the journey to invent himself – this of course also with the much-needed support and gratification from the David Krut Print workshop and the gallery team.
His first solo exhibition dealt significantly with what one can term the ‘unusual behaviours’ of the city in relation to the rural peripheries – a conflict derived from the reality of coming into the city from the rural village of Driefontein, Mpumalanga. ‘Naked Pressure’ repeatedly employed the motif of the Joburg cityscape pictured upside-down – born from his subjection to pressure and frustrations with daily life in the city. Madala Thepa, local arts writer, describes Shabangu’s view of the city as a “morally reprehensible space that exerts pressure and forces people to focus on ephemeral needs.”. Navigating the infamous Polly Street, known in Johannesburg for its prostitution market, Shabangu has borne witness to the dreams of enthusiastic youth, who, as Thepa describes, have migrated seemingly “pre-conditioned to accept the city as it is with its socio-political credentials.” Despite this, Shabangu’s work alludes instead to a rejection of the city’s preconditions; focussing on the propulsion of the youth to make their dreams a reality despite the relentless pressure imposed on them. 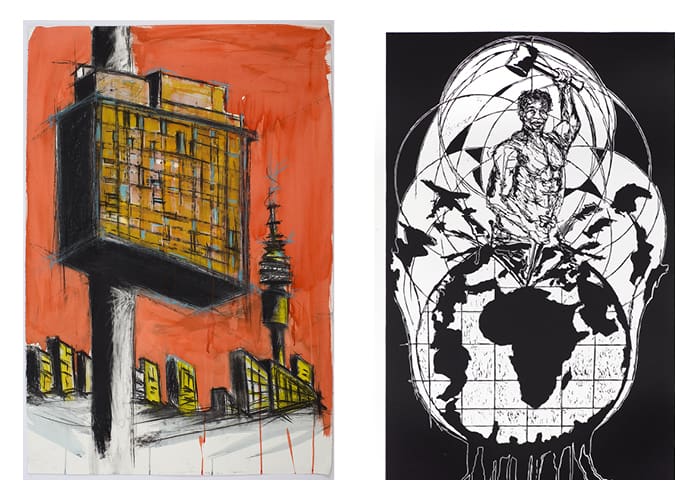 Above left: Senzo Shabangu, Load Shading II, 2015. Mixed Media, 118.7cm x 76.8cm. Above right: Senzo Shabangu, Lord Remind Me Who I Am, 2014. Linocut, 148 x 91 cm. Edition: 15.
Shabangu’s choice mediums of charcoal paintings and linocut – both of which have enjoyed long histories and have been well used over the previous centuries – have been deftly employed in his work. Shabangu pushes the boundries of the traditional understanding of these mediums, innovating the use of form and colour to the ultimate end of telling a story. He may not be specifically a protest artist like Thami Mnyele, or Wally Mongane Serote – who were both part of the generation of artists that made use of similar mediums in the fight against the oppressive laws and injustices of apartheid- but he is certainly an activist and social commentator. Speaking of the role of the writer in his book There Was A Country, the legendary Nigerian-born author Chinua Achebe once wrote “The role of the writer is not a rigid position and depends to some extent on the state of health of his or her society. In other words, if a society is ill the writer has the responsibility to point it out. If the society is healthier, the writer’s job is different.” Achebe further emphasized that “The triumph of a written word is often attained when the writer achieves union and trust with the reader, who then becomes ready to be drawn into unfamiliar territory, walking in borrowed literary shoes so to speak, toward a deeper understanding of self or society or foreign peoples, cultures and situations.” This view is also concomitant to the gesticulation of an artwork, and like the writer, Shabangu has a role to play in the politics and social upheavals of his day. There is within ‘My World’, a triptych entitled Self-Portraits which reflects his frustrations, human triumphs, feelings, gratification, and joys. Within them one notices a male figure standing on the top of the world with a hammer in his left hand and a nail in the other. It is mapped with an array of interpretations; possibly a man at work- hammering, chiseling and nailing his world into the shape of his dreams.  The title: Lord Remind Me Who I Am.
With his youthful energy, Shabangu brings to the audience’s attention the political, social, cultural and economic realities that he has witnessed. There is a myriad of represenations of dislocation and displacement within Shabangu’s work – which could be easily associated with the inequality  prevalent both within South Africa and the world at large.  South Africa itself is one of the most unequal societies in the world, and Shabangu through his work has delved extensively into the ‘control systems’ which maintain its existence. His portrayal of the contemporary forced removals, better known in the Hillbrow area by the appearance of the ‘Red Ants,’ is an engagement with this subject from an experience where he was once a victim. One would have thought that this social disproportion had disappeared with the sunset of apartheid, but it is alive and kicking; we see it walking daily through the streets of our country.
Within his work Ixhapozi (which translates from Zulu as ‘swamp’) beds, human figures and buildings appear to float aimlessly out of the bowl or vessel which contained them. Boxes or containers are used within Shabangu’s work as a metaphor for the power possessed by the elites. The poor are depicted seemingly inside these boxes, which would appear to imply their being ‘owned’ or restricted by economic inequality. A Pedi dictum appears to put it well: Dihlalefi di tla ja matsogo a mašhilo, which loosely translates to: ‘The wise will eat from the basket of the fools.’ 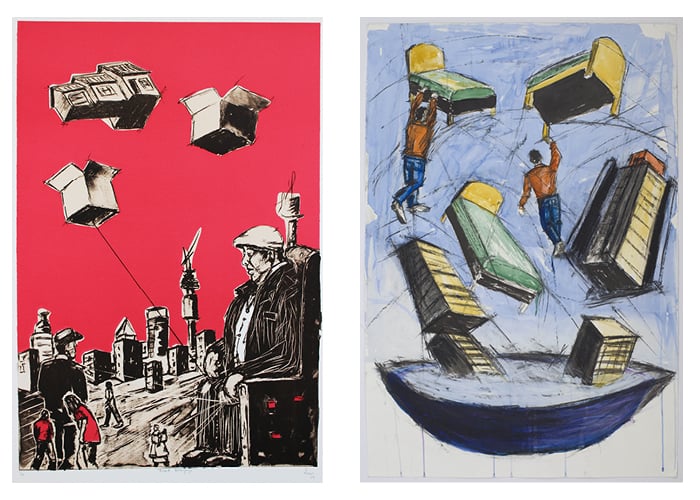 Above left: Senzo Shabangu, Boxed Belongings, 2015. Lithograph. Edition of 10. Above right: Senzo Shabangu, Ixhaphozi, 2015. Mixed Media, 111.8 x 77cm.
In his Nelson Mandela Annual Lecture of 2015 Professor Thomas Picketty, the French economist, spoke elaborately about the issue of inequality. He earnestly highlighted the importance of realising that issues of inequality, income, wealth, capital, and public debt are not technical issues but issues in which everybody must have an opinion on – because ultimately they determine political change. Professor Picketty expressed his optimism about the country when he said “I think there are domestic solutions to the inequality in South Africa, so as I already said, there are four areas of rights where we need to turn to a policy of effective rights – rights to labour, work for a decent wage, right to high-quality education, right of access to property, and right to economic and political democracy.” Shabangu’s work is a magic interpretation of the most profound thoughts on the most sensitive subject, he manages to bring humour into an attempt to persuade the public of a consumer society that what they really should aspire to is simplicity and humanist reverence.
‘My World’ runs until the 31st  October 2015. In addition, there will be an official Artist’s Walkabout on 24th October, which will be conducted by the artist at David Krut Projects, 142 Jan Smuts, Parkwood at 10h00am.
Khehla Chepape Makgato is a Joburg-based independent artist and arts writer contributing articles regularly to ART AFRICA and The Journalist online publications. He works at Assemblage Studios and The MediaShop. He is the founder of Samanthole Creative Projects & Workshop, a community-based art organisation focusing on arts and literacy youth programmes.