We Have Never Lived In a Post-Colonial World 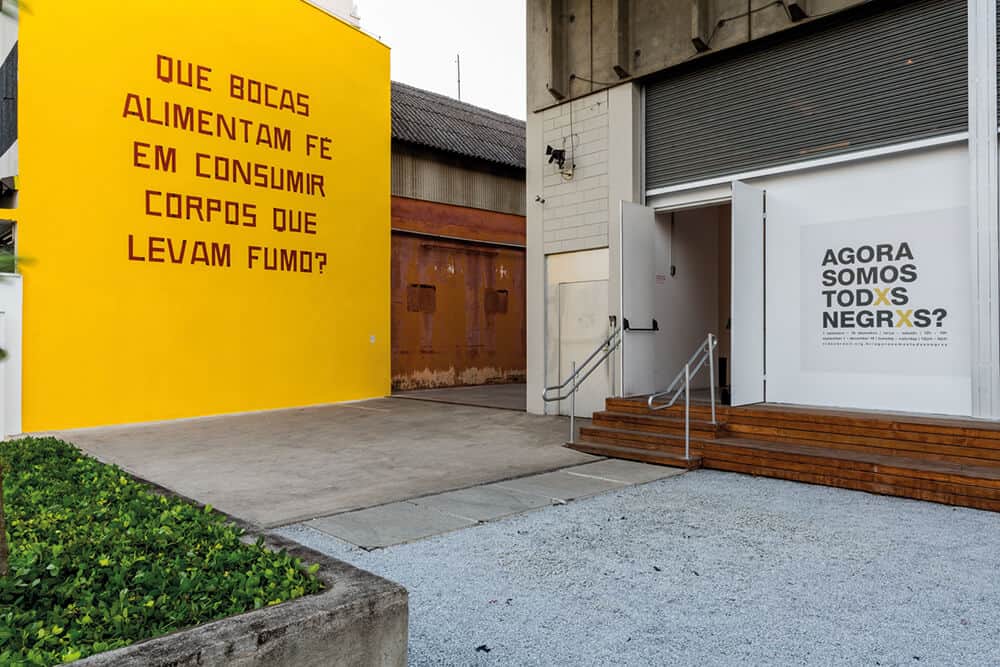 As an ode to self-representation, the exhibition ‘Agora Somos Todxs Negrxs?’ (‘Now Are We all Black?’) evidences the large gap of missing black voices, not only in institutions of contemporary art, but also in all other spaces of political representation, which have systematically excluded this kind of authorship. The important exhibition, now showing at the Galpão da Associação Vídeo Brasil until 16 December 2017, appreciates and recognises the place of contemporary black artists in Brazil’s cultural production. Intervening in such spaces, and unleashing a network of artists and works that refer to a range of subjects not limited to race, the exhibition brings historically racialised bodies to reclaim their institutional space. In engaging these individual perspectives, a web is created that can then determine the process of how this new world – one that respects aggregated individual, self-authored narratives – can come to be.

Being black in Brazil involves a selective visibility. One is almost invisible in the media of intellectual and artistic production, while the black population has a massive presence in the periphery of the cities and at the base of the social pyramid. It is a product of an excluding political project that continues to act pervasively on several spheres. In the face of this obtrusive violence, how does one vindicate a representational identity? If we speak of origins, it is impossible to speak of a single expression of Black Art in Brazil, as what entails ‘blackness’ itself already originates from several different regions and has undergone many other cultural influences in its trajectory from Africa to America.

In this exhibition, there is a recovery of Zozimo Bulbul, an important artist from Rio de Janeiro, notably from the cinema of the 1970s, in his video performance Alma no Olho (Soul in the Eye) of 1973. In this piece, he interprets the trajectory of black people all the way back from their tribes in Africa, passing through slavery in Brazil, and the parallel space that they occupy in the current Brazilian society. This space limits the black population to roles or occupations that continue to be reverberations of a past of slavery: in the past they may have been servants or charioteers, today this translates into menial house work. Although it is evident that these are noble functions, these roles still dominate the available labour market and thus constrain the black population today.

Although Bulbul’s piece is over 40 years old, it dialogues directly with Musa Michelle Mattiuzzi’s performance of Merci Beaucoup Bianco, which raises the banalisation of images of violence done to black bodies, as well as the painful burden carried by black female bodies, specifically, in ways that are unseen or unperceived. White paint covers her entire body, and the needles piercing through her facial skin are not that evident until they are removed and her bright red blood begins to drip over the contrasting white. The performance is visually strong, and places a non-normative body in a position that evidences the carrying of a pain that is not immediately noticed by the viewer.

The body becomes a striking component in many of the works in the exhibition. They denounce the continued traces of colonialism that traverse their experiences, the ghosts of a patriarchal violence that does not cease to inflict harm in order to sustain the myth of a single ‘universal’ narrative. These bodies become exoticised, and pain is perversely normalised in their depictions. 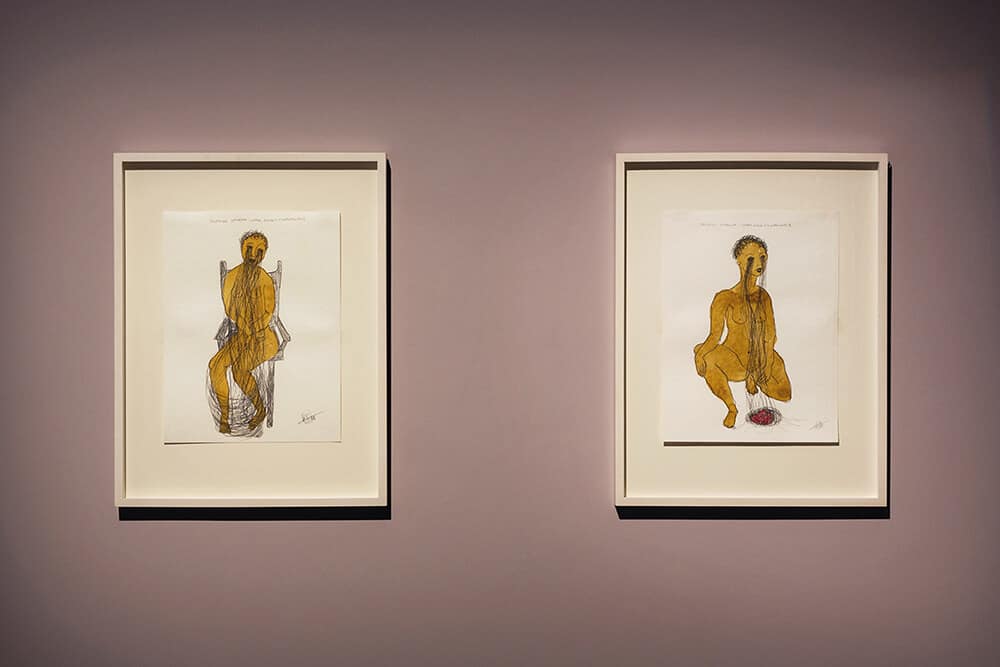 In this context, experiences that are dissident from the norm (feminine, black, from the periphery, LGBTS …) are extracted and sanitised for the consumption of an art form that, more often than not, speaks of black populations for them, instead of actually offering them their turn to speak. It is remarkable that although a significant part of Brazilian art speaks about the Afro-Brazilian population, it is mostly not done by Afro-Brazilians themselves. Galleries and art collections continue to be seriously unrepresentative of this demography. Recognising this, the curator Daniel Lima made an ethical point by commissioning new works from three artists: Ana Lira, Michelle Mattiuzi and Jota Mombaça; he also purposefully chose artists that are either women, trans or non-binary. Lima seeks to intervene directly at an institutional level, placing great importance on these kinds of relationships with the artists, thus breaking the continuity of the predatory tendencies of curators towards the works. By making explicit the need for self-entitled labels, Lima seeks to assure the representation of these perspectives among exhibits and collections, as well as to be more able to point to faults whenever there is an inadequate or disproportional distribution of representation within such institutions.

The exclusion of the black perspective becomes flagrant when we consider that Brazil had the largest and longest-lasting slavery in the entire world. It received over 45–50% of the world’s enslaved Africans, and, in the 19th century, the city of Rio de Janeiro had the largest black population of any city outside of Africa. How is it possible to have, in this expressively black nation, such an underrepresentation in art today? This contradiction is pointed to in the emergence of the recognition of the importance of identitary matters, as well as of understanding these matters as being transversal and intersectional. For example, Rosana Paulino’s Tecido Social (Social Fabric) depicts, on large pieces of fabric that are sewn together, each one with an image that points to a specific social, political and economic role in society, the deep reliance that each of these roles have on one another. She makes the point that the existence of a lower class is absolutely essential to supply the available time or goods that ultimately benefit the higher classes. Using textiles, Paulino takes us back to notions of domesticity, referencing the deep history of domestic labour that is entrenched in Brazil – with the great majority of persons in such roles being black women.

With the black artist’s body as a common denominator, we begin to see the expression of new ways of withholding a particular identity, as well as all of the existing obstacles in the way of self-determination. For instance, the insurgence of stereotypes that are imposed onto this body are depicted in Luiz de Abreu’s Samba do Crioulo Doido (Samba of the Crazy Crioulo); the denouncing of the genocide of the black population is presented in 111 Cale-se (111 Be Quiet) by Ana Lira; the oppressions lived by femininities are portrayed in the works of Rosana Paulino, such as Proteção Externa contra dor e Sofrimento (External Protection against Pain and Suffering); and even the urgent need for reparation in A Ferida Colonial ainda dói, Vol. 6: Vocês nos Devem (The Colonial Wound still Hurts, Vol. 6: You all Owe Us) by Jota Mombaça.

Institutional racism and the black underrepresentation in spaces of power have, as a result, led to a precariousness in the life conditions and in the exercise of full rights for afro-descendents.

Institutional racism and the black underrepresentation in spaces of power have, as a result, led to a precariousness in the life conditions and in the exercise of full rights for afro-descendents. This creates the imperative of a collective and communitarian answer, as we can see in Zumbi somos Nós! (Zumbi is Us!) by Frente 3 de Fevereiro, in which an enormous banner with this saying was extended over the bleachers of football fans during a football game at the Occupation Prestes Maia. It dialogues with the Haitian manifestation displayed in the video Nou pap Obey! (We Will not Obey!) by Daniel Lima and Felipe Teixeira. In this context, art assumes, simultaneously, an aesthetic role and a stance of political manifestation.

Moreover, the title of the exhibition, taken from Article 14 of the Haitian Revolution and inverted into a provocative question, also displays an update to the struggle: removing the letter that denominates gender in the Portuguese word for ‘black’, substituting it with the more malleable and gender-neutral ‘x’, appearing as ‘negrxs’. This important update sustains the provocation of how to rethink a larger population that requires explicit recognition, all the while preserving individual narratives of self-representation. It invokes the need to think of these different struggles together, to understand the necessity, in multiplicity, to counter the pole of power that has been centred on a single white, patriarchal, exploitative narrative.

Cadu Oliveira is an intersectional militant on the matters of LGBT, the Black movement, and PVHIC (Pessoas vivendo com HIV/People living with HIV), in the collective Revolta da Lâmpada.

Paula Van Erven is a visual artist, and member of the collective Lanchonete.org, which articulates themes related to the right to the city. 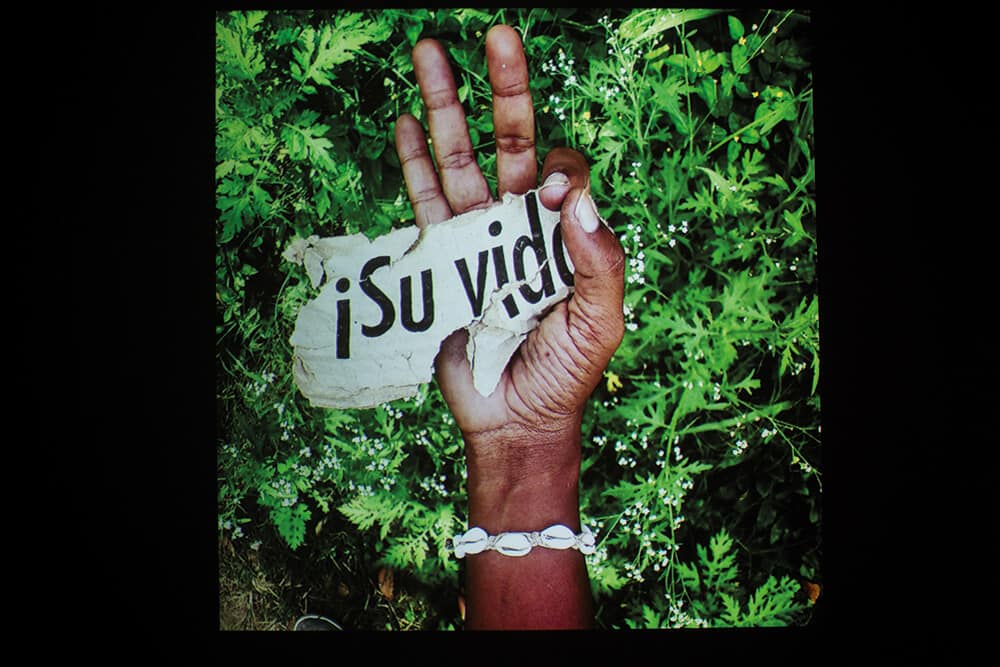 An earlier version of this article referred to the exhibition incorrectly as ‘Somos Todxs Negrxs?’, and failed to mention the artists name for Merci Beaucoup Bianco. These errors have since been corrected online.