The rise of collector activism

Over the past decade, the art market has been undergoing turbulent changes. Globalisation and emerging art markets, art as an asset class, the rise of social media, a boom in art fairs, the emergence of multi-national gallery models, and a rise in private museums. Examined closely, many of these changes are driven, at least in part, by collectors and in particular, new business conscious collectors are engaging with the market and artists. While criticisms of the monetisation and productisation of art abound, one development in particular has been emerging as a positive signifier – the emergence of activist collectors in a patron capacity.

Reporting for New York Times in 2017, Jennifer Miller reports on, “a shift in how some arts enthusiasts, from wealthy individuals to grant-making foundations, are relating to creators. They are moving away from merely collecting and consuming art and toward a model reminiscent of the Renaissance, when royal houses provided room, board, materials and important professional connections to talented artists of the day.”

“Patrons of the 21st century are far less politically motivated than the Medici family and their ilk, and they generally don’t house artists in their lavish estates or command them to paint frescoes. But just like the patrons of old, they are giving creators a pathway to success and economic stability, providing living expenses, supplies, pep talks and more.” 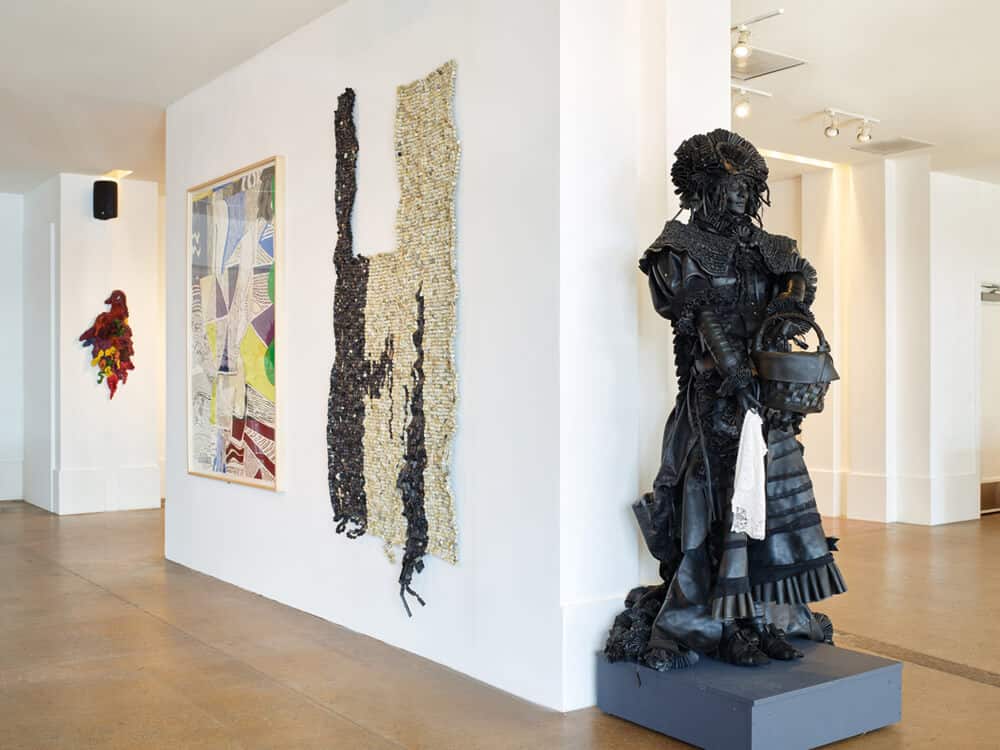 Installation shot of ‘Right at the Equator’.

Explanations can be many – from the drastic cuts in government cultural funding, to changes in the way art is produced, and the backgrounds of collectors. Roselee Goldberg, the South African born founder of Performa, believes today’s patrons are similar to the “angel investors” of tech. “You see that something has potential to grow and you want to support that incubation period.”

While many default to comparisons to the Medici Renaissons patronage, the idea of artist patronage is far from uniquely European.

Speaking about re-emergence of patronage in the context of Chinese and Hong Kong contempoary art, Chin Chin Teoh – co-director of the MILL6 Foundation, a non-profit arts and cultural organisation – qualifies the difference between a collector and a patron, “we like to classify a patron as the sort to have a direct relationship with the artist. There is a direct dialogue between the artist and patron, so the relationship is mutually negotiable.”

William Molesworth – the director of de Sarthe Gallery – also notes that patronage can be in some ways a democratising movement, “I think there is a huge disconnect between the actual cultural value of art and the economics behind the art world. I wish there was a way to motivate more funding for the artists, not just from the government but also from the public and the galleries, to support a whole wide range
of artists, not just the tip of the iceberg.”

Carolina García Jayaram – president and chief executive of the National Young Arts Foundation – claims that “For many years, patrons were supporting institutions or a product, underwriting this ballet or putting their name on a specific show at a museum.”

Recently, she also said that “donors understand how important it is to support artists – not just the art”.

This kind of understanding has driven the development of the newly thriving art scene of Saudi Arabia, where organisations such as Misk Art Institute, a new organisation with headquarters in Riyadh, were created to encourage art production in Saudi Arabia and enable cultural diplomacy and exchange.

If this understanding of the importance of support for production is prominent in some of the more developed and better-funded art scenes, it is absolutely crucial for artists in the African context. Ahead of the current expansion of interest in contemporary art on the continent, the art sectors and art production on the continent became dominated by international NGOs, many of which were and remain concerned with American/European head office agenda’s than the living needs of artists. Even as commercial markets on the continent and beyond evolve, it will be a long time before infrastructure – museums, galleries, art schools, art materials production, social security – bridges the gap in artist support. While we celebrate the emergence of art museums, the role of institutions is that of an archive, preserving and displaying cultural artefacts and artworks. It is complementary to and not a substitute for the deep need for independent production support.

Patronage can become a crucial factor in closing such a gap, overcoming the hurdles of fulfilling an artists’ creative potential and reaching the broadest possible audience. It appears that such understanding is starting to emerge in the context of African contemporary art also.

While his collecting and activism is well publicised, over the past several years, Sindika Dokolo’s work through the foundation has begun to incorporate this kind of practice, with notable projects such as the funding of production of works in the ‘The Divine Comedy: Heaven, Purgatory and Hell Revisited by Contemporary African Artists’ curated by Simon Njami. This exhibition travelled between the Museum für Moderne Kunst in Frankfurt, SCAD Museum of Art in Savannah, Georgia, and the National Museum of African Art at the Smithsonian Institution in Washington, D.C.

And then there are the more close to the grass roots support models, such as those of social entrepreneur turned art patron, David Altman. Born and raised in South Africa, Altman spent the 1980s and 90s living in New York and Los Angeles and Europe traversing industries as diverse as fashion, development and education, as well as art. Re-engaging with South Africa in recent years, it also became an opportunity to immerse himself in the burgeoning Cape Town art scene. However as someone engaged with development, Altman immediately understood that collecting alone is not enough. Making a commitment to personally get to know and understand the needs of each artist he chose to collect, Altman acknowledged that this can assume a different dimension to what would be usually understood as a patronage relationship.

“This can range from supporting an artist in building a house, to sourcing and shipping art materials across tricky borders, to helping solve medical issues. I would call it an environmentally responsive approach, which recognises that the artists I work with live in a context where, what one might call ‘ordinary rules’ do not have to, and often cannot, apply,” says Altman. 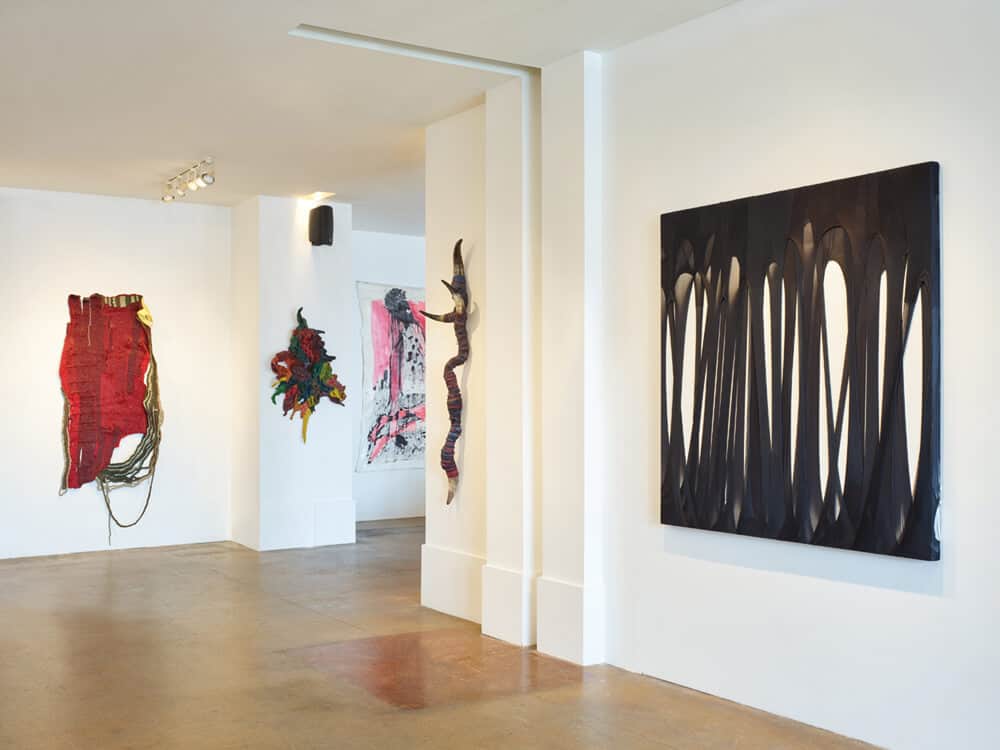 Installation shot of ‘Right at the Equator’.

Having begun with support and acquisition, Altman’s patronage has evolved with the realisation that artist’s support ought to also include career development. This has led to the development of exhibition projects to create international exposure for the artists in the collection. The first of these ‘Right at the Equator’ is currently on at the Depart Foundation in Los Angeles and features the works of 22 emerging artists including Gareth Nyandoro, Serge Attokwey Clottey, Igshaan Adams, Gresham Tapiwa Nyaude and Wycliffe Mundopa. The exhibition, is a first effort of its kind in California and is a strategic effort to bring entirely new audiences to the artists in his collection and contemporary African art.

While patronage is only starting to establish itself as a significant force in contemporary art on the continent, it is important to remember that in pre-colonial times, patronage of artists, musicians, poets and skilled craftspeople, was an established part of traditional, social and communal structures in many cultures and regions on the continent. The importance of patrons emerging on the continent, then, is not only important for the development of successful art ecologies. It is also, in many ways, an opportunity to decolonise cultural economics and regain the balance of power in the content and context of art made on the continent, and African art seen internationally.

Valerie Kabov is an art historian with a focus on cultural policy and culture economics. She is the co-founder and director of Education and International Projects at First Floor Gallery Harare. She is also a curator for ‘Right at the Equator’.