News from another world: a story about melting ice

Muted emergency of a warming planet

One of the most bewildering aspects of climate change is that, until your house has been burnt down by a runaway fire or until you’ve had to evacuate your city due to a flash flood, it remains an abstract projection, a hovering cultural phantasm in the slipstream of our collective consciousness. 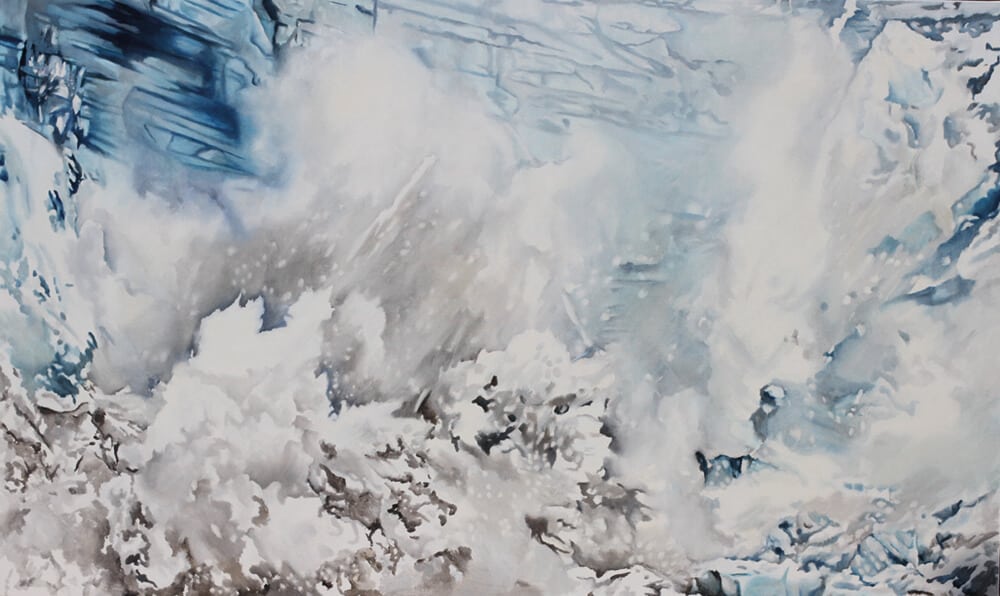 For ‘News from Another World’, her current solo exhibition, Robyn Penn delves into the ambient quality of hint, rumour, threat that bespeaks the muted emergency of a warming planet.

‘There is this sense of mystery – of things being not quite tenable, always just a hint of things to come,’ says Penn. Her current imagery is at once a departure from and continuation of her enduring fascination with the shifting, endlessly morphing shapes of clouds, which began as studies in the sublime and became increasingly redolent with the subtext of climate change denial.

This exhibition features several series of ice images in varying media, each exploring different aspects of the substance, properties and behaviour of ice. It is a story about melting ice told in a variety of different registers and modes, ranging from a barely audible whisper to thunderous Wagnerian crescendo. Yet, even in their most epic registers, the paintings retain a phantasmal quality – documentary blurs into a dream. Penn works from found images – some sourced online, some photographed by a friend James Kydd, a wildlife guide, on a recent trip to Patagonia – and in the process of painting brings a ghostly, ephemeral quality to the photorealism of the documented icescapes.

‘Ice is a disguise-artist, a chimaera-chameleon, a category-confounder,’ writes Robert Macfarlane (Mountains of the Mind, The Wild Places, Landmarks, Underland). ‘The stories we often tell of ice – mythic, folkloric, scientific – often speak openly of its physical slipperiness and tacitly of its metaphysical slipperiness; it’s astonishing abilities to occupy space and sculpt matter, but also to evanesce, dissipate and shift state and form.’

In the cataclysmic tenor, there are two large oil paintings that have emerged from the same photographic image of a glacier ‘calving’ – huge sheets of ice breaking off of a glacier or ice shelf. Each painting features the same image, reversed, so they are mirror images of one another – each capturing an incredible sense of light and depth. ‘It’s insane. There’s just this ice falling and these massive waves breaking. The scale of it is massive. Almost beyond comprehension.’

One painting features an abstracted image of a polar bear suspended in an empty plain of whiteness. It is based on the images of bears in threatened Arctic habitats posted online by Canadian photographer, filmmaker and marine biologist Paul Nicklen. ‘My desire with this painting was to create some kind of filter between the viewer and the photographic image of the bear – to disrupt it in some way,’ says Penn.

‘Sometimes I convert the original photograph into black and white to see it differently or sometimes I specifically choose bad, low-res images,’ she says. ‘It helps me to see the constituent elements that make up the image, which are like broken brush marks.’ While painting, she constantly has to walk away from the easel – put distance between herself and the evolving image to make visual sense of the point at which it coheres as an image. Close-up, her mark-making is abstract; further away it makes photographic sense. 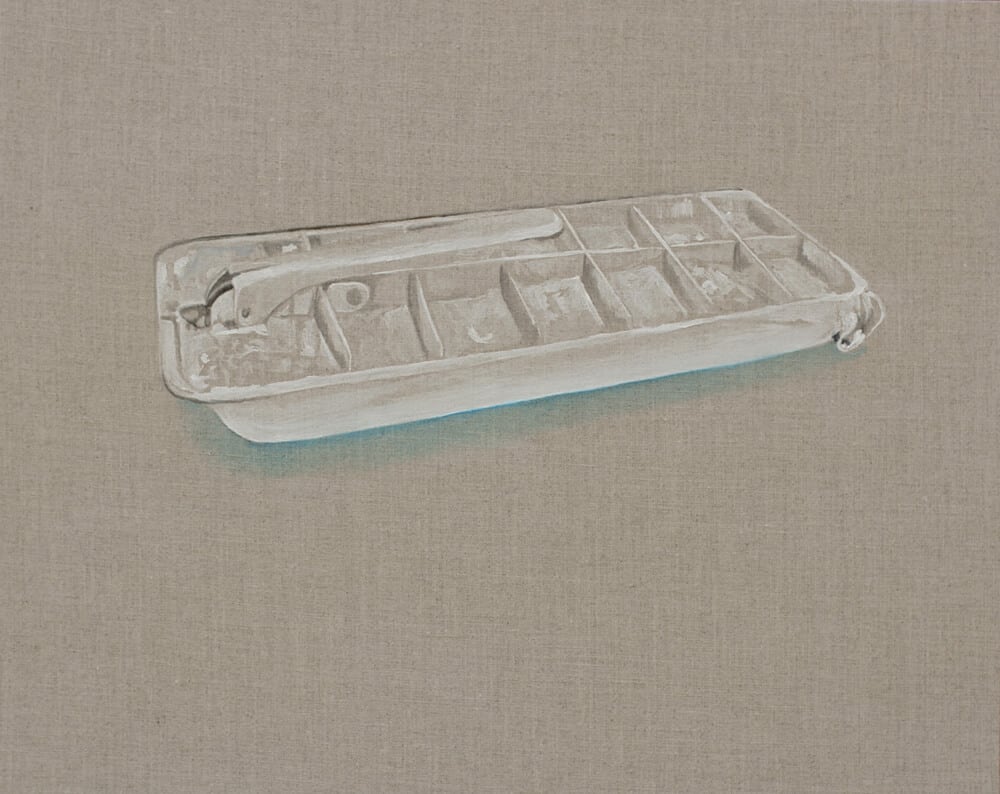 There is a series of small paintings of individual sheets of crumpled paper – painted in white and aquamarine oil paint on natural linen. Even as they are sheets of crumpled paper, the topographical qualities of a plane and fold give them the appearance of icebergs – isolated fragments cut loose from thinning ice shelves, floating adrift in the polar oceans. ‘They are not at all built up as I would usually build up a painting; there’s just that initial layer,’ says Penn.

Sharing this lightness of touch is another series of semi-abstract ice sketches within ovoid shapes suspended within the frame like drops of water on a flat surface. The format was inspired by Victorian art critic, social thinker, draughtsman and watercolourist John Ruskin. In his pioneering explorations of icy landscapes, Ruskin made sketches to accompany his field notes.

‘It was like he’d just grasped the image and that stuck with me,’ says Penn. ‘How do I represent just the vaguest idea of a thing? Think of a world where ice no longer exists. How do you represent something that is no longer there? I’ve had to really resist overworking the canvas. It’s like trying to write a haiku.’

This poetics of erasure and restraint is also present in a series of atmospheric ink and bleach works on paper and canvas. ‘Years ago, I inherited this incredible, heavy handmade paper… and it suddenly struck me that I could paint the whole surface black with ink. The process was amazing because you aren’t able to control the way the paper absorbs the ink. It was thirsty; it soaked up bottles and bottles. Then I bleached it, allowing for variations in tone that you just wouldn’t get with the more mass-produced papers.’ 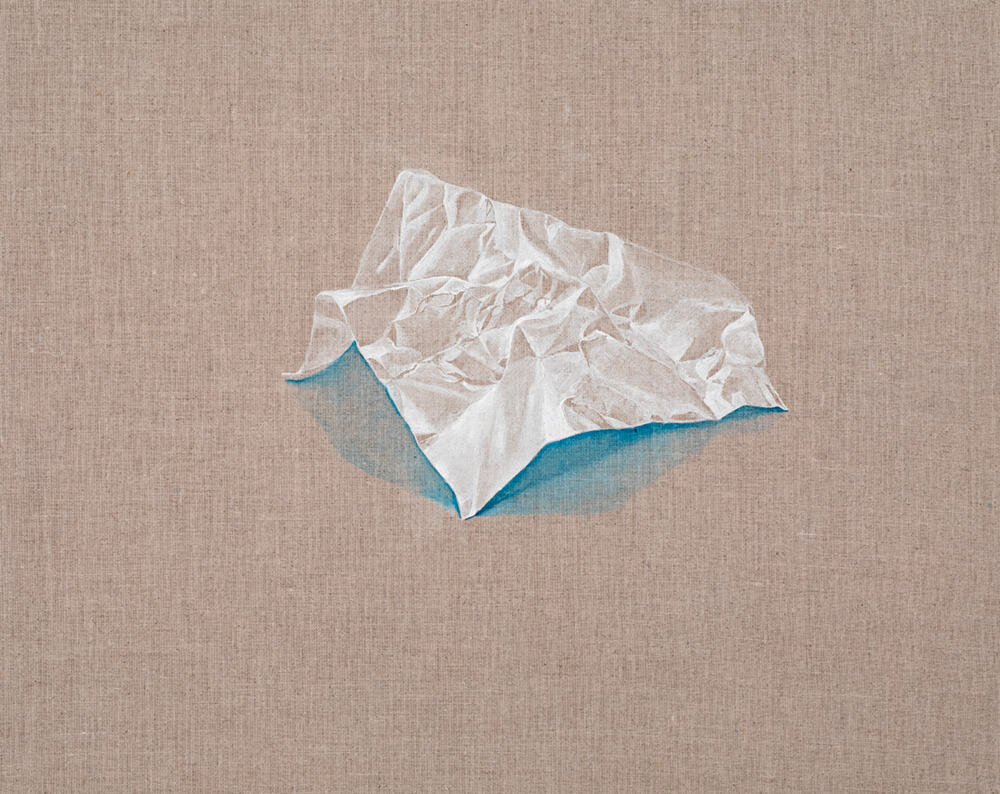 The show also features a few quirky conceptual provocations – a small painting of an old aluminium ice-cube tray, one of the electric fan that cools her studio and another of a small solar-powered figurine of Queen Elizabeth II waving. In the gallery’s video space, there will be four low-tech video pieces: two featuring the surface of the moving ocean filmed with a cellphone camera through a pair of old binoculars; a slow-motion recording of the movement of the same studio fan projected onto on a transparent frame; and close-up footage of the waving hand of the same solar-powered Queen figurine.

Through all these shifting modes and methods, the gallery is likely to be transformed into a conceptual cryosphere – a multivalent conjuring of ice and mirrors that reflects on our actual world in which vast territories of ice are fast turning to liquid.

Alexandra Dodd is an independent writer and editor, and a Postdoctoral Fellow in the National Research Foundation SARChI (South African Research Chair Initiative) in Social Change at the University of Fort Hare.