in News Articles 2013
Share on facebook
Share on twitter
Share on email
Share on whatsapp
Locust Projects in Miami: special exhibitions for Basel.
Nicholas Hlobo: Intethe (Sketch for an Opera)
Nicholas Hlobo in collaboration with local Haitian musicians on an opera entitled “Intethe” (“Locust” in Xhosa).
Project Room: Frances Trombly: Over And Under
Angel Otero: Art on the Move
November 9 – December 21, 2013
Reception for the artists with a performance by Nicholas Hlobo
Thursday, December 5, 7-10pm
Now celebrating 15 years of exhibiting experimental contemporary art, Locust Projects is pleased to present Intethe (Sketch for an Opera), South African sculptor Nicholas Hlobo’s first major project in Miami. Hlobo is known for creating theatrical environments and sprawling organic sculptures made of materials such as leather and rubber, intricately stitched with ribbon and lace. This installation will incorporate the large-scale sculptures into a multifaceted performance space and video installation. For the first time, he will collaborate with Miami-based Haitian band Papaloko and Loray Mistik on a sketch for an opera entitled Intethe (“Locust” in the Xhosa language), exploring notions of shared identity throughout the global African diaspora.
Nicholas Hlobo, ‘Izithunzi,’ 2009. Rubber inner tube, ribbon, organza, lace, found objects, steel, couch, dimensions variable. Installation view, South African National Gallery, Cape Town. Courtesy of the artist and Stevenson, Cape Town and Johannesburg
Through his work, Hlobo expresses an interest in the commingling of cultural dichotomies: traditional vs. colonial, rural vs. urban, child vs. adult, straight vs. queer, which are stitched together to form unexpected new tapestries. The performance will explore cultural and spiritual hybridity to which the Haitian musicians’ identities add a new layer. The experimental opera will be set amongst the installation, and part of the gallery will function as a dressing room for the performers, whose costumes will remain in the space when they are not present. The live performance will be presented twice during the exhibition and the original score, written collaboratively by the artist and musicians, will be incorporated into the installation. 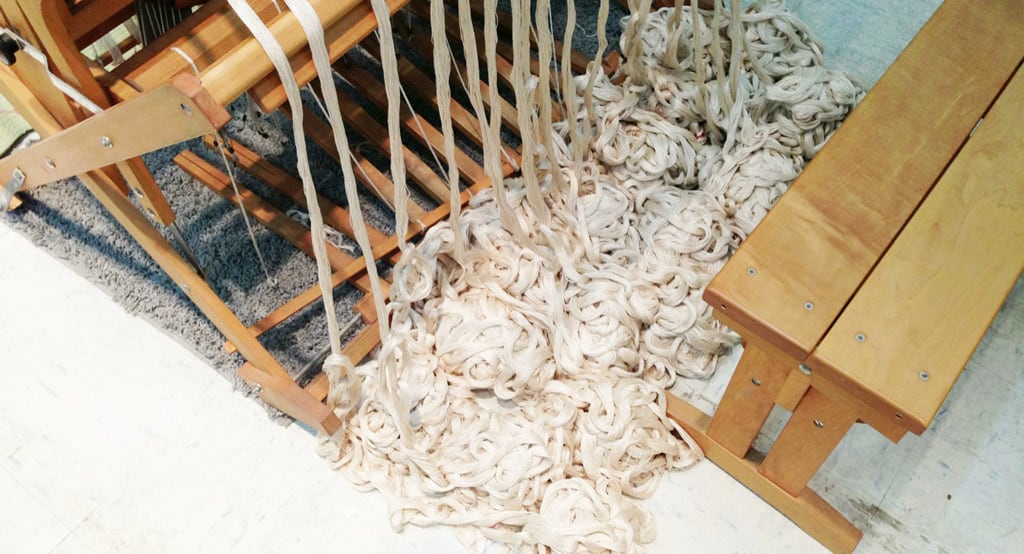 Frances Trombly, ‘Over and Under’
In the Project Room, Miami-based artist Frances Trombly will present Over and Under, a floor-to-ceiling scaffold. This structure is the framework for a handmade canvas, which is rhythmically woven in and out, up and down in a manner that visually echoes industrial fabric production. Trombly’s largest work to date, Over and Under poses a direct challenge to the artists’ studio practice, opening up a new relationship with the physicality of the loom by defying its confines. Expanding on Trombly’s interest in the contrast found in handmade objects that normally are mass-produced, Over and Under focuses on the cloth itself. The work contains a timeline of its own construction, a transcription of the gestures of working and constructing in space.
Angel Otero has been commissioned to create a work for Art on the Move, part of Locust Projects’ ongoing public commissions initiative. The New York-based Puerto Rican artist embeds personal history in his densely stratified abstract paintings. Otero’s investigational process begins with thickly layered compositions painted on large planes of glass. These “oil skins” are then scraped off in sheets and draped onto canvas, revealing layers of under painting and distorting the original image. Otero’s artwork will appear on the backs of Miami Beach buses and at Miami Metro Rail stops in December 2013.
Locust Projects:
2013 marks the 15th anniversary of Locust Projects, a not-for-profit exhibition space dedicated to providing contemporary visual artists the freedom to experiment with new ideas without the pressures of gallery sales or limitations of conventional exhibition spaces. Founded in 1998 by a trio of Miami-based artists, Locust Projects has become one of the most robust alternative art spaces in the nation, presenting adventurous exhibitions, lectures, education programs and public commissions, all free and open to the public.
Courtesy of Lisa Palley, Palley Promotes