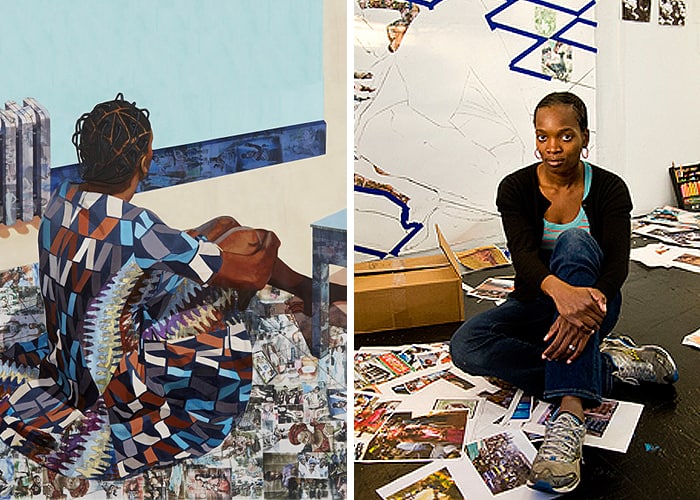 LEFT TO RIGHT: Ajideka Akunyili Crosby, “The Beautyful Ones are Not Yet Born” Might Not Hold True for Much Longer. 2013. Acrylic and transfers on paper. The artist in her studio, image source: chikaoduahblog.com
The museum’s prestigious contemporary artist award was established in 2001 to recognize an artist younger than 50 who has produced a significant body of work and consistently demonstrates exceptional creativity. Previous winners of this award include Pierre Huyghe; Mark Dion; Jessica Stockholder; Andrea Zittel; Kara Walker; Rirkrit Tiravanija and Jorge Pardo.
Akunyili Crosby was selected by an independent panel of jurors who wrote in their decision,
“Her bold yet intimate paintings are among the most visually, conceptually, and technically exciting work being made today.”

Akunyili Crosby has also been selected for the New Museum Triennial, Surround Audience, curated by Lauren Cornell and Ryan Trecartin opening in New York on 25 February and continuing through 24 May 2015. 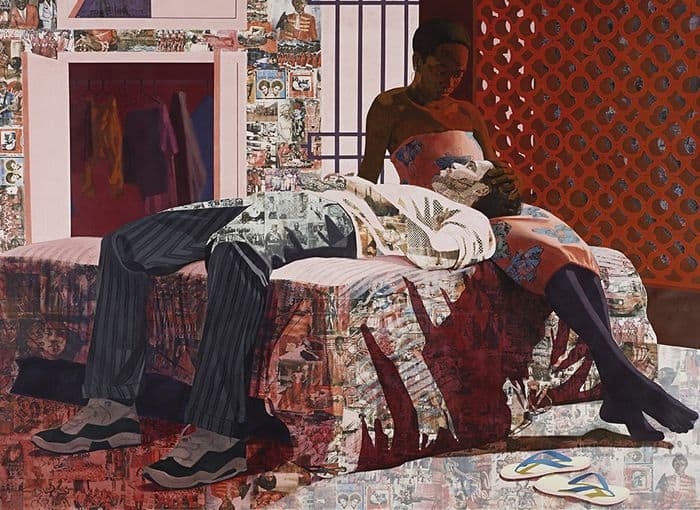 ABOVE: Njideka Akunyili Crosby, Nwantinti. 2012. Acrylic, charcoal, coloured pencil, collage and Xerox transfers on paper.
Akunyili Crosby was born in Enugu, Nigeria in 1983, where she lived until the age of sixteen. In 1999 she moved to the United States. Her cultural identity combines strong attachments to the country of her birth and to her adopted home. This hybrid sense of self is reflected in her work which is populated with images of family and friends in scenarios with details derived from everyday domestic experiences in Nigeria and America. These include recollections from the formative years of her upbringing, as well as more recent relationships and experiences. Her work often features an element of self-portrait, as in a series of intimate scenes of the artist with her husband made in the early years of their marriage.