Dressed in black with glasses set before her eyes, Lerato Shadi is sitting on a four legged chair – body tranquil, legs crossed – her fingers moving and weaving from what looks like a red woolen ball – transforming it into what appears to be a red carpet. Lerato means ‘Love’ and no doubt she is using the colour red as a metaphor that drives her exhibition theme. ‘Noka Ya Bokamoso’ is a Tswana saying for ‘River Of The Future.’ This exhibition, curated by Joan Legalamitlwa, is effervescence of the live performance – and includes other mediums such as video installations and drawings. 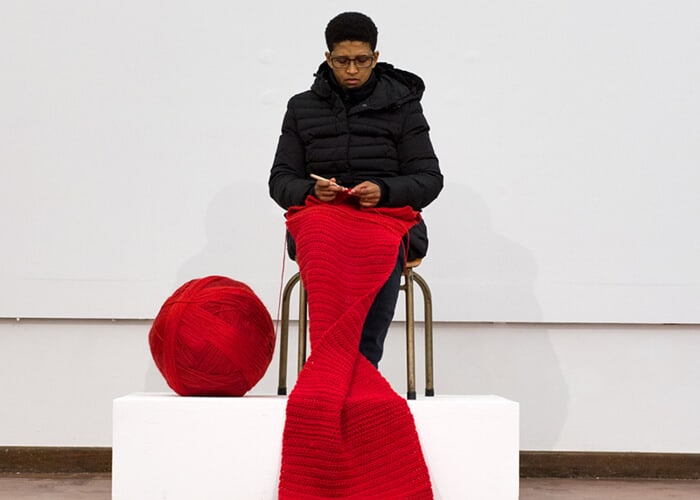 It seems art, for Shadi, is primarily a struggle with time. She sits on the chair daily from 10:00 until 16h00, without moving. This act poses many difficult questions on the state of the nation, when there is so much noise (countrywide) about the upcoming municipal elections. The silence, the sounds and the stillness of the space finds its way into Shadi’s work, using her body to interrogate accepted norms. A lot of it has to do with how the objects are put together, a juxtaposition of the past and the present which gives the meaning of the work renewed life and acquaints the future. Hers is a tried and tested patience, a lot to learn when trying to marry passion with career.

One can conclude that Shadi wishes her work not to be confined to the academic tower. Even when pursuing rather abstract arguments or topics, her style remains accessible to a wider audience – everyone can read it. Lonwabo (aged seven) attests to this, confidently walking around the exhibition and thoughtfully engaging with the work. She told me that she really liked the work, “it just speaks to me,” she said. 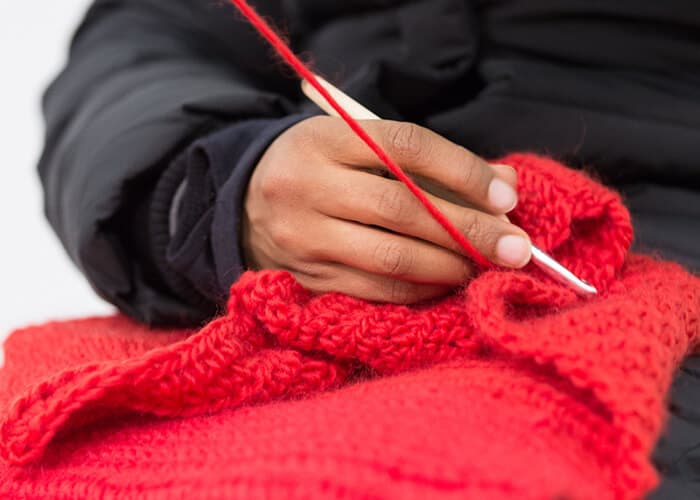 
Too often, contemporary art criticism has set out to impose philosophical and theoretical systems upon individual artists, rather than exercising artistic judgement. It is illuminating and refreshing to return to Shadi’s direct, forceful approach; to return to an artist who is prepared not only to have people judge her work, but also to respect the achievement of the creative act.

One of the most striking features of the visual culture or literacy in Shadi’s work is the growing tendency to visualise things that are not in themselves visual. Allied to this intellectual move is the growing natural capacity to make visible things that our eyes could not see unassisted. For Shadi to choose to sit silently on a chair for six hours a day is in itself a significant moment of cognition. It is a decision that can never be made without the awareness that it is being made. That moment when it finally comes, as it ultimately does with Shadi, we see a liberated soul shutting off all the external chaos from the outside world. 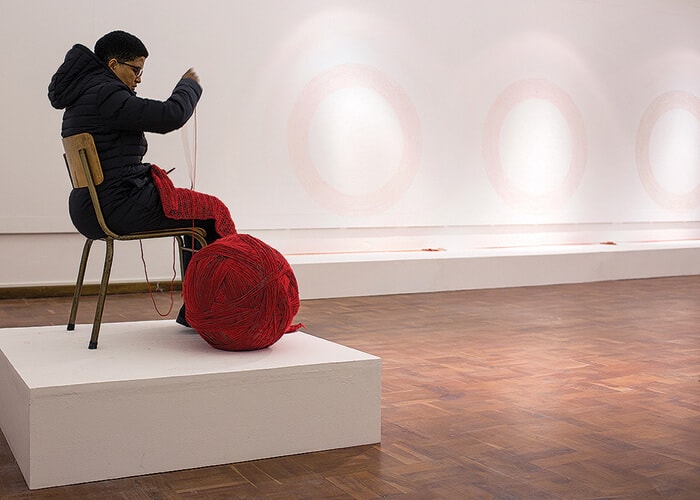 In interrogating Shadi’s work, there is a remarkable ability to absorb and interpret visual information on the basis of industrial society, something that is becoming even more important in the information age. Her work has a natural human attribute and relatively new learned skill. In other words, visual culture doesn’t depend on pictures but the modern tendency to picture or visualise existence. The three big circles drawn in red pencil are salient and focus on the visual as a place where meanings are created and contested. The circles are inscribed with texts that are finely written and hard to read. Lying at the base of each circle are two short pencils, one eraser, and pencil shavings. 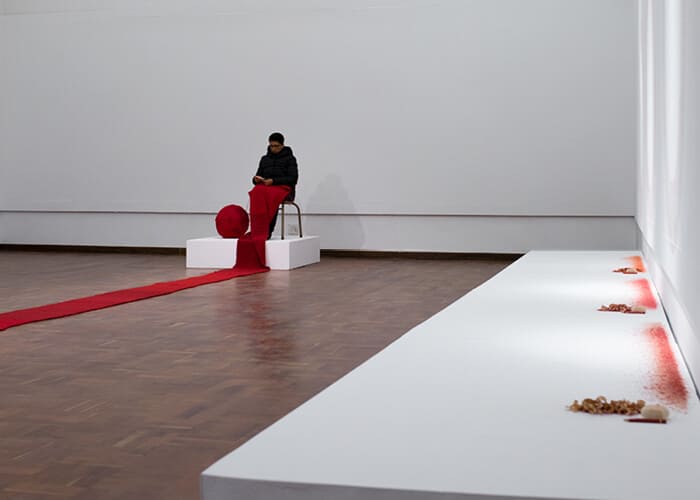 These texts speak of an intellectual discussion in the wake of linguistics, based on movements such as structuralism and poststructuralism. When one watches the video installations, however, there is a communication going on between the artist and her mother. Their lips are coated in sugar and salt and the subject appears proverbial. Salt is synonymous with struggle and pain. In some communities, such as where I grew up, salt was regarded as a king in the kitchen in that even if one has no relish for the cooked pap, so long as salt is available then all is fine. Scientists say that mixing salt and sugar reduces headaches, boosts immunity and raises the vital level of the body, adjusting one’s level of serotonin and electrolytes. 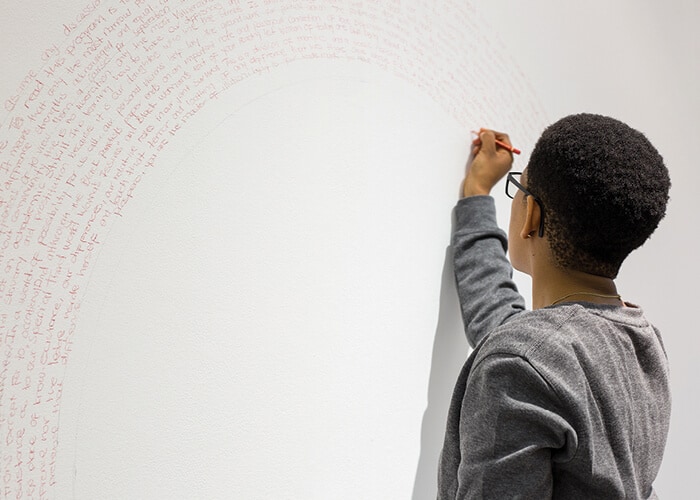 
Performance lies deep in Shadi’s work, not only in the exhibition ‘Noka Ya Bokamoso’, but also in most of her previous works. We see her as an actor on a canvas stage. By making herself and her practice the subject, focusing on an airtight creative world, Shadi isolates herself from what is happening in society. Here is a work of genius, a kind of austere dramaturgical work involving an empty gallery space, a protagonist (the artist sitting mutedly on a chair with hands knitting towards a masterful red carpet) and the antagonist (a weaving crotchet and red ball of wool).

The exhibition is not only abstract and at times easy to comprehend but it is also brimful of African adages and proverbs. In one of Shadi’s video installations titled Moremogolo Go Betlwa Wa Taola – which in full says “Moremogolo Go Betlwa Wa Taola, Wa Motho Oa Ipetla” a Sepedi/Setswana/Sesotho dictum losely translated to read ‘Great legends are made self made not medicine made from trees.’ It actually speaks to the ability of taking charge of one’s destiny and not waiting for someone to shape your world but being your own craftsman to do that. Shadi becomes a fine example among other contemporary artists who interrupt the accepted norm of doing art and telling stories. She brings into her art an ancient pattern of intensive labour relations with a renewed energy and enthusiasm.

‘Noka Ya Bokamoso’ explores the ambiguities of freedom and personal commitments to one’s passion and mighty calling. It was up for the entire duration of the Grahamstown Arts Festival.

Khehla Chepape Makgato is a Joburg-based independent artist and arts writer, regularly contributing articles to ART AFRICA and The Journalist online publications. He works at Assemblage Studios and is the founder of Samanthole Creative Projects & Workshop, a community-based art organisation focusing on arts and literacy youth programmes.