Notes Made While Listening 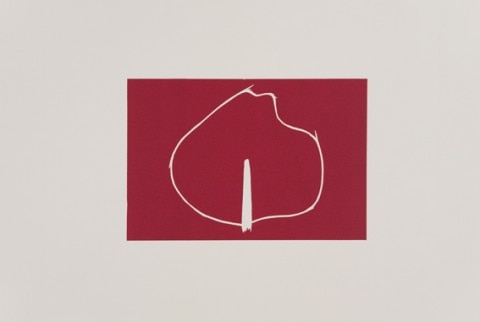 It is no small thing – and oft observed – that abstract painting, in its modernist manifestation, set itself up as a form hostile to language. Writing in 1985 about the modernist grid, Rosalind Krauss argued that it “announced, among other things, modern art’s will to silence, its hostility to literature, to narrative, to discourse.”1 Those who championed abstract art, most notably Clement Greenberg, claimed a pure materiality for such art, a resistance to the literary in favour of what WJT Mitchell calls the “pure, silent presence of the work.”

Since then, modernism’s resistance to language, writes Mitchell, has been overturned by postmodernism’s “breaking down of that barrier between vision and language that had been rigorously maintained by modernism.”2

Postmodernism’s appeal to language, however, is not to literature but rather to another discourse, that of theory. Postmodernism grew up, as it were, alongside the flowering of a theoretical response to painting (and other mediums). At the same time, it also took language – text – into its formal fabric so that text became any one of a number of possible vehicles of expression to be used in the construction of a work of art. Armed now with the language that theory has bequeathed us, we can contend – as Mitchell does – that, far from resisting language, “all abstract paintings [are] … visual machine[s] for the generation of language.”3

There is one fundamental difference between the way in which theoretical discourse arose around abstract painting and the relationship between literary and historical narratives in “traditional” painting. Theoretical discourse always arises after the fact, in response to, as an extension of the creative work, which is not the case in painting that relies on literary and historical narrative – in the latter, image and narrative are integral to, born out of, each other.

This is not to say, however, that abstract painting eschews “subject matter” or content. Rather, and here is Mitchell again, “although iconography and represented objects may disappear, content and subject matter do not.”4 By extension, this means that abstract painting may be as overtly “political” as a painting in which we recognise signs, figures, objects and so forth, but that its relationship to the political – or the historical – is premised upon openness to ambiguity.

I have, admittedly, offered a rather neat historical trajectory: classical painting to modernism to postmodernism on the one hand; literature to theory to an erasing of the difference between text and image on the other. But it provides us with a useful point to begin speaking about the work of the German artist Jürgen Partenheimer, who visited South Africa at the end of last year at the invitation of the Nirox Foundation and returned again this year to wrap up projects started on his first visit.5 Partenheimer is a distinguished artist who has exhibited widely in many major museums in Europe, including solo shows at the Stedelijk Museum, Amsterdam, S.M.A.K. Ghent, the Nationalgalerie Berlin and the Staatliche Kunsthalle Karlsruhe. He has participated in the Paris, Venice and Saõ Paulo biennales, and exhibited at MOMA, New York, the National Gallery in Washington DC and the Museum of Contemporary Art in Madrid. His was the first retrospective of a contemporary German artist at the China National Gallery of Art in Beijing and the Nanjing Museum.

“Abstraction”, for all that I have used the term to approach this artist’s work, falls away somewhat as we contemplate the sly relationship between representation and refusal to represent in Partenheimer’s images. He remarked to me that working in South Africa made him extremely conscious of the “language” in which he has always worked, both of its consistent engagement with its abstract forebears and its tracing of a relationship to silence and to the “space of breathing” such as he has encountered in certain forms of Japanese art.