in News Articles 2013
Share on facebook
Share on twitter
Share on email
Share on whatsapp
Craig Hubert (@craighubert) writes about Fela Anikulapo-Kuti, the musician and human rights activist, only tangentially. It uses a new documentary about his life — “Finding Fela,” directed by Alex Gibney and currently playing at the IFC Center in New York — to ask questions about how to address political subjects on stage and screen. It’s composed of fragments that can be read in any order. Like Fela’s life and music, there are multiple narrative strands floating through this text without a clear beginning or ending. 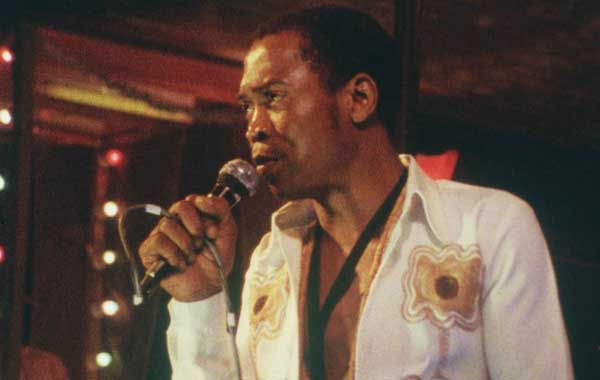 Courtesy of Jigsaw Production and Blouin ARTINFO.
Question: Who is Fela Anikulapo-Kuti? A man composed of contradictions: Child of privilege, voice of the people; son of a women’s rights activist, hedonistic vampire; husband to 27 of his back-up dancers, distant father to his children; denier of AIDS, victim of AIDS; inspiring figure of revolution, assimilated into the proscenium of the Great White Way; arbiter of agitation, poet of the groove.
The multiplicity of Fela’s life, its evasion of a clear narrative, is what made him interesting. There’s no single Fela Anikulapo-Kuti and there are many. Where these different lives coalesced into a unified form was within the music: Afrobeat, the distinctly Nigerian blend of Ghanian Highlife and American Funk, and propulsive political music for the dance floor. But Afrobeat was more than a sound, more than the combination of influences noted above. It provided the language of the moment, personal and political. To align oneself with Afrobeat was a form of protest,
“Finding Fela” uses the Broadway production of the musical “Fela!” as a framework to talk about his life and career. The show, after a brief one-month Off-Broadway run, opened at the Eugene O’Neill Theatre on October 19, 2009, with a book written by Bill T. Jones and Jim Lewis, and Fela’s music played by the Antibalas Afrobeat Orchestra. The production was nominated for 11 Tony Awards and won for Best Sound Design of a Musical, Best Costume Design of a Musical, and Best Choreography.
Gibney uses backstage footage during preparations for the show, along with interviews with the creative team behind the musical, drawing implicit parallels between their struggle to squeeze the many lives of Fela into a crowd-pleasing stage production and his own struggles as a political dissident. This serves as an introduction — a door in the present day that opens into the past — and a safe reminder that no matter how troubling the story we’re watching seems, it ends on a pleasing note.
It’s a simple device but a flawed one. To shape Fela’s lives into the laziest of narrative clichés, softening everything that was dangerous or taboo about his life and work, is to sacrifice all that was essential to his truth in the name of relatability. It implies that an audience can’t handle or won’t appreciate a complicated figure on screen, a man who transcends easily identifiable notions of good or bad. It suggests that the audience can’t think independently, outside of the traditional norms — one of the very ideas Fela countered through his music and message. 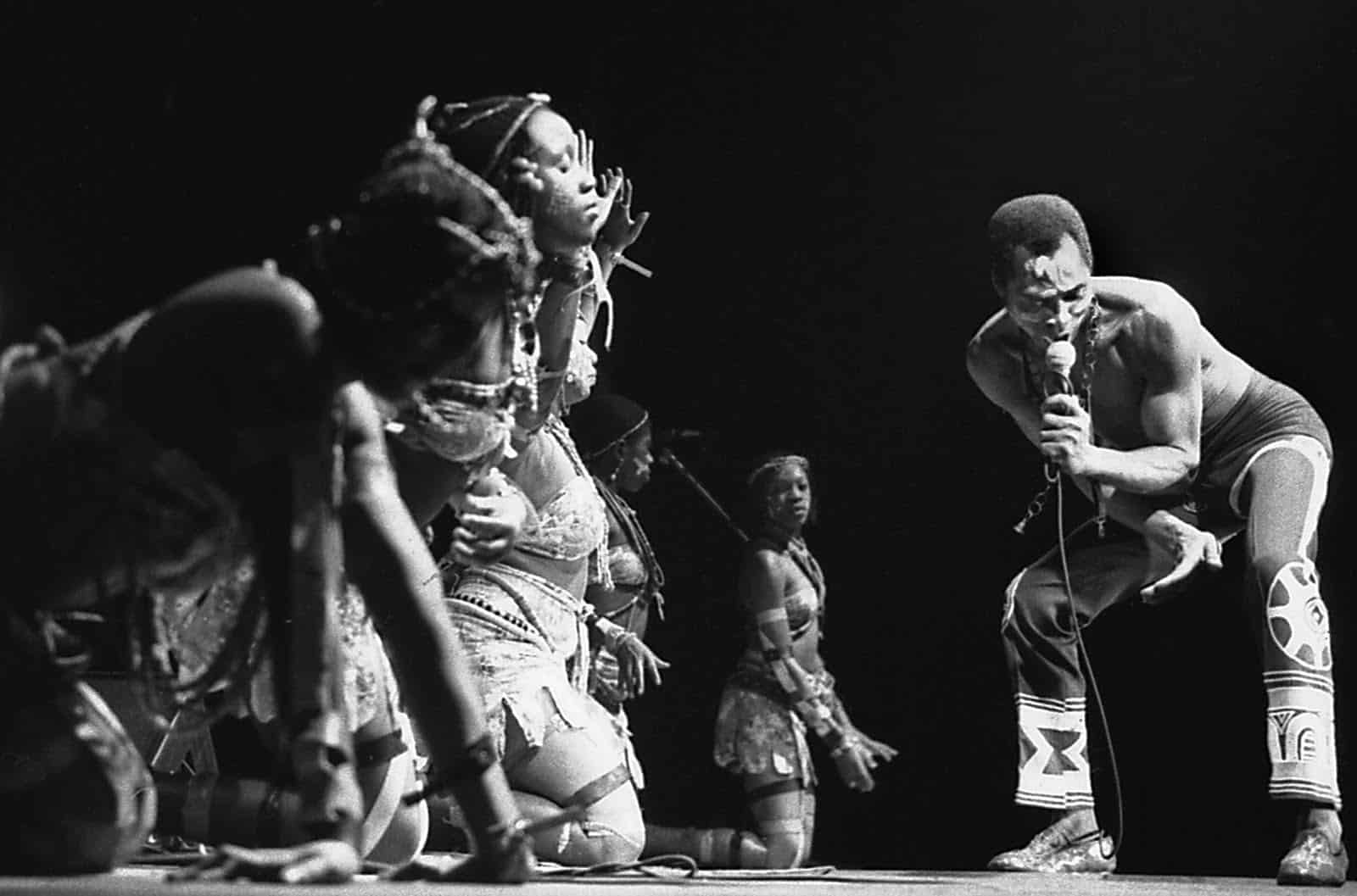 Courtesy of www.conceptoradio.net.
“Yes, the political part of it is a necessity,” Fela told journalist John Collins in an interview. “I don’t see how African music today can be about what doesn’t affect our lives now. Our music should not be about love; it should be about reality and what we are up to now…. So Afrobeat is an occasion for politics because that is the occasion we are in now — people suffering.”
Is there any way that a movie or stage production can be made about Fela without diminishing his politics? A statistic: as of 2013, white people purchased 78 percent of all Broadway tickets. Another statistic: the average annual household income of a regular Broadway theatergoer is $186,500. Does bringing Fela into the confines of the Broadway stage, populated and funded by an affluent and mostly white audience, change how he is perceived, no matter how the sensitivity of the portrayal?
Maybe none of these things matter? A story: at the press screening of “Finding Fela” that I attended, there were more people there from community activist groups then there were members of the press. Can a blunted version of Fela’s story, devoid of its subject’s complications, be used as a tool for activism?
“Afrobeat,” Miles Davis reportedly said, “will be one of the musics of the future.” Would we embracea movie or stage show about Miles Davis that painted him simply as a hero, eliminating all that was difficult and ultimately unique for the sake of pleasing an audience? Would such a work include the time when Davis, asked what he would do if he had one hour to live, answered that he would spend it choking a white man?
A more detailed analysis of Fela’s music might be needed, but I’m not the one to provide it — I’ll leave that to the musicologists. All I can say with confidence is that his dense rhythms had both implicit and explicit influences on western music. Their repetitive structures can be heard in most contemporary dance music, and their use of fragments and ellipses forms provides clarity on the structures of hip-hop. 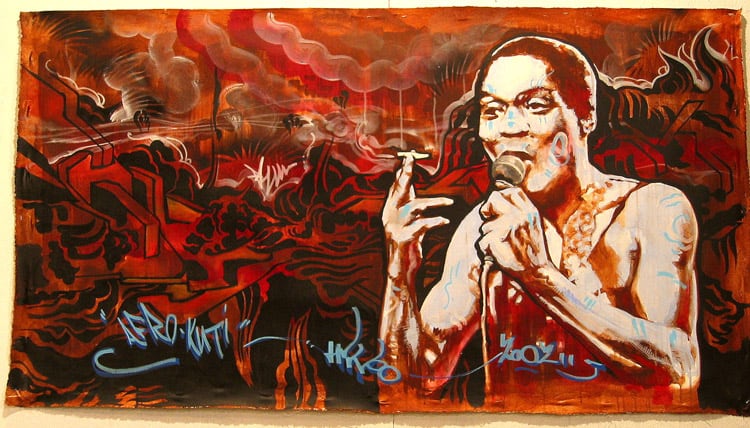 Courtesy of www.righteousvibes.com.
Let’s think of how “Finding Fela” could be improved under different circumstances. First, there would need to be a formal strategy that is somehow working in conjunction with Fela’s life and music — in other words, something that highlights his multiplicity, his contradictions, his complexity. A form that doesn’t smooth over the rough edges but incorporates them into its stream of sound and image. A form that meets Fela halfway — an attempt to understand him that acknowledges from the beginning there is no way to fully understand him.
“Follow the music now,” Knox Robinson writes about Fela, “the medium and the message and not the scarred and scattered souls he left in his fiery wake; to judge Fela as the sum of his parts would be a Manichean worldview most likely he would have rejected.”
Written by Craig Hubert (@craighubert) for Blouin ARTINFO.