‘Nothing Personal:’ A Group Exhibition at SMAC Gallery, Stellenbosch

in AFRICAN ART, CONTEMPORARY ART, EXHIBITION, IDENTITY, INSTALLATION, MIXED MEDIA, OPENING, PERFORMANCE, REVIEW
Share on facebook
Share on twitter
Share on email
Share on whatsapp
Lhola Amira is sitting at a table, a glass of wine in one hand, looking pensively at the laptop screen in front of her. She’s dressed in a smart, earth coloured onesie, high-heels and head gear. There’s a chopping board on the table; a big cutting knife; a packet of menthol cigarettes; two bottles of wine; a bag of red onions; a book; and underwear – lots of it. By this point, the onions are lying in a large, homogenous and finely-diced heap next to the knife. There’s a suitcase lying open on the floor, full of colourful underwear. She stands up and continues dicing the remaining onions, knocking the tears back with wine. At one point she grabs a cigarette off the table, moving toward the window of the gallery space where she lights up, observing the people around her. 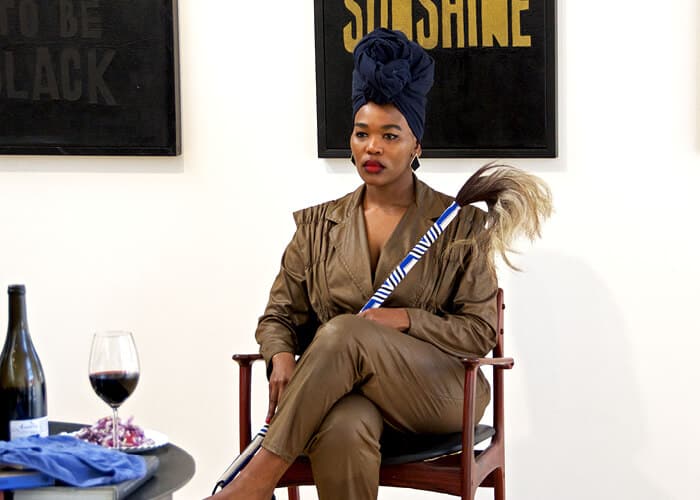 “Lhola Amira is all of us and none of us simultaneously,” reads the artist’s biography for ‘Nothing Personal,’ a recent group exhibition of fifteen artists at SMAC gallery, Stellenbosch. “Her appearing character represents a ubiquitous wonder, encompassing all conceivable gender, cultural and racial categorisations, while remaining resonant to the individual.” In ‘real-life,’ Lhola Amira doesn’t smoke or drink, and her name is Khanyisile Mbongwa. But that’s beside the point. Right now she is Lhola Amira, and she has just sat down at a chair to address those in attendance on the opening night of the exhibition. 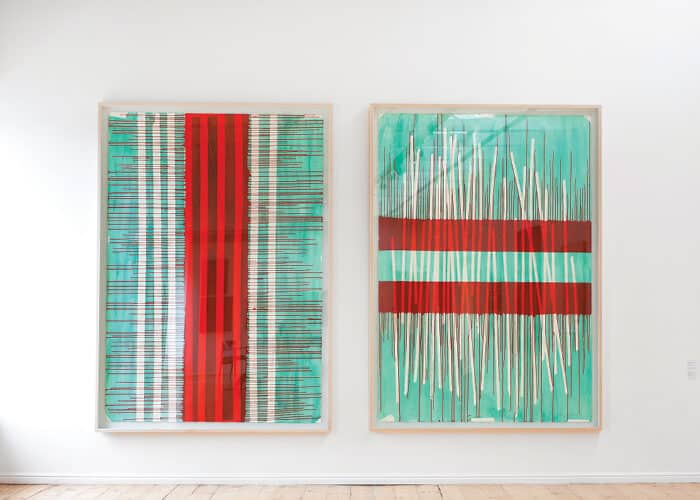 “Nothing personal,” she says, tilting her head to the side and shrugging her shoulders indifferently, a fake smile on her face, “Nothing personal.” She repeats this four times, pausing for a second or two in-between to allow her words to sink in. “Nothing personal, BUT, as long as the world is anti-black and anti-woman, this shit is personal,” she interjects, “Nothing Personal… Repent for being black… Repent for being woman… Nothing personal…” There is an emphasis carried by the silent moments, a weight, best read through the popularised paper by Carol Hanisch (1969), which claimed that it was impossible to separate the ‘personal’ from the ‘political’ – a founding premise for the exhibition. “This is mostly due to the use of the word ‘personal,’ the definition of which largely depends on comparison and differentiation,” explains the curatorial statement. “The ‘personal’ relies on interpretation. ‘Interpretation’ relies on understanding, and around we go…”
Caught in a seemingly endless, inescapable loop, Lhola Amira’s appearance resonates with the over-arching theme of the exhibition directly, yet it is the cyclical structure of her performance – this idea of inevitable return – and the simultaneous emphasis that is placed on what isn’t being said that captures me. 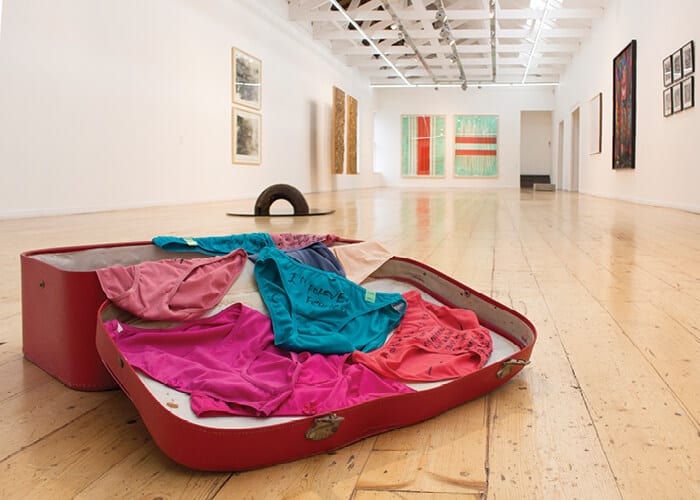 Installation view of ‘Nothing Personal’ at SMAC Gallery, Stellenbosch, 2016.

Like the character herself, Lhola Amira’s performance creates, or at least alludes to, an alternate space. Here the artist is freed from the idea of the ‘personal,’ the ‘ego,’ and everything that comes with being Khanyisile Mbongwa. By removing her person from the equation, the artist frees herself from the image or concept that she may have of herself and what people have come to define as her person. As Alan Watts points out: “What people meet and understand and what I understand as [myself], is a big act, which is not really me. Because in the image of Alan Watts, there are not all my unconscious processes, both psychological and physical. The construction of my brain is not contained in the concept of Alan Watts. And the concept of Alan Watts does not contain the inseparable relationships I have with all the rest of the universe.” 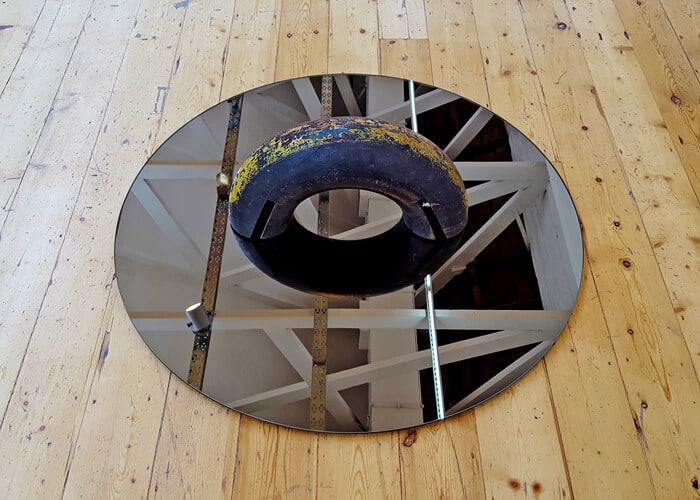 Whilst all the work on show is contextually specific to each artist, this idea – that there is more than meets the eye – forms a binding thread between the various contextual experiences reflected. Perhaps the most obvious example would be Ruann Coleman’s installation, Loop (2016). Here we see a pipe, cut in half and mounted upright as a semi-circle in the centre of a circular mirror. From a distance, the pipe’s reflection completes the circle, creating the impression of a whole. From another perspective, however, it becomes apparent that what we are seeing is a mirage. In the same vein, Mongezi Ncaphayi’s large scale abstractions draw our attention to the surface as a zone of influence, a repetitive layering of colour and form that creates the illusion of depth. In her installation, Measuring Blackness and a Guide to Other Industries (2015), Euridice Kala challenges the simplistic, exploitative, and reductionary nature of racial definitions of colour by contextualising a relationship between ‘Blackness’ and ‘Other Industries’ – as if ‘Blackness’ were some type of commodity which could be measured, weighed, packaged, and sold at will. The execution of this, however, is significant in the context of the exhibition. The video installation is placed in the centre, suspended between two word sets: ‘Ivory,’ ‘Salt,’ ‘Bone,’ (left) and ‘Cotton,’ ‘Coconut,’ and ‘Powder’ (right). It provides the clues that we use to deconstruct their otherwise arbitrary meaning. Once again, it is the artist’s acute awareness of an alternative outside of the literal (yet centre stage) that serves the reading of the work.
Like much of the work on exhibition, Lhola Amira’s appearance reminds us how irrational and reductionary our concepts of ‘self ’ are, de-arming the vacuous, subjective punch of statements like “Please don’t take this personally…” by pointing out that there really is ‘Nothing Personal’ about them.
‘Nothing Personal’ was on show at SMAC gallery, Stellenbosch from the 11th June until the 30th July 2016. This article was first published in the September 2016 edition of ART AFRICA magazine, entitled ‘BEYOND FAIR.’