Of gods, rainbows and omissions

As legend has it, Nongqawuse was a fierce, young Xhosa girl who notoriously became the medium of communication between the ancestors and the Xhosa people – resulting in the mass slaughter of cattle between 1856 and 1857, and the subsequent demise of the Xhosa Nation. 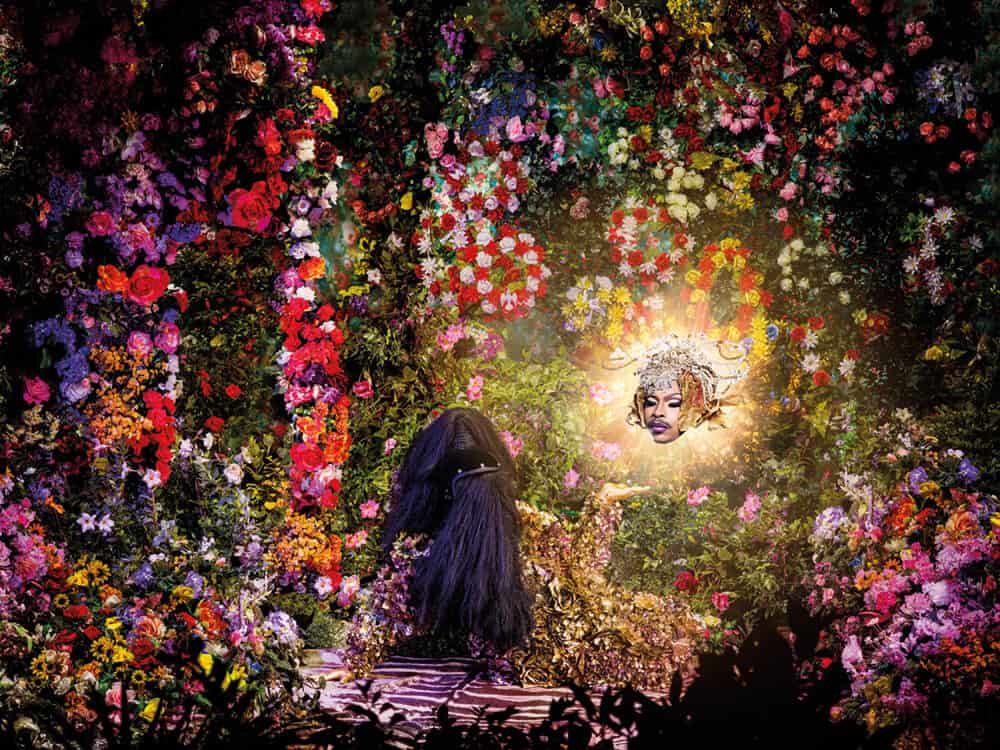 Orphaned when her parents were killed in the battles of the Waterkloof, Nongqawuse is said to have been quite conscious and deeply aware of the tensions between the British colonial forces and the Xhosa nation. However, given the intense ramifications of her prophecy, Nongqawuse has been disparaged as having betrayed her people.

It is believed that Nongqawuse was imprisoned on Robben Island by colonial forces – and as a result of her prophecy. Following this, there is no official mention of her in history.

For Athi-Patra Ruga – performance artist and allegorical utopian – it is historical personalities such as Nongqawuse who make up his mythical pantheon of gods and heroes.

Driven by the notion of exile, and the nonsensical nature of nationalism, Ruga’s work – varying between large-scale tapestries, installations and performance – addresses the traumas of the last 200 years of colonial history, strategically located from a place of detachment. Ruga’s mythical pantheon of self-appointed Olympian gods – or “Avatars” as he refers to them – is created from a distance, where wounds can be contemplated outside of personalised grief and subjective defensiveness.

In creating this alternate universe, Ruga has used the notion of exile to celebrate – and bring to the fore – unspoken, unheard of, or erased histories. And yet, in spite of his inspirational figures coming from a place of the past, for Ruga, his work must be read according to the times. 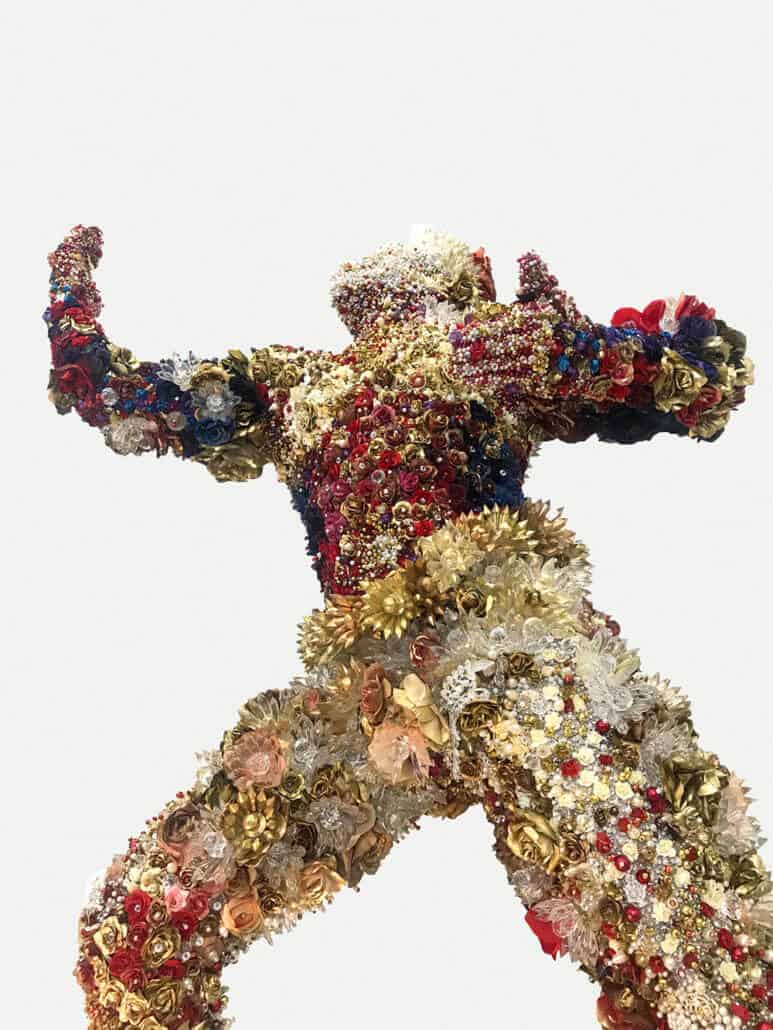 “A maniac like Rhodes should be removed”, says Ruga in reference to the 2015 expulsion of the Cecil John Rhodes monument from its perch overlooking the University of Cape Town. “Instead, we should create ‘cemeteries’ for human error – perhaps a garden or a site where these monuments can live, for contemplation and public scrutiny.”

In direct response to the crude nature of Rhodes and his fellow colonial and apartheid counterparts cast in stone, Ruga created ‘The Beatification of Feral Benga’ – where ‘beatification’ originates from the Latin beatus, ‘blessed’, and facere, ‘to make’. This series of works – which has been ongoing since 2017 – considers the Senegalese dancer, Feral Benga, and places him in a position of influence – commanding tribute as a queer icon.

The Proposed Model for Francois Feral Benga Monument, which forms a part of Ruga’s ‘The Beatification of Feral Benga’ series, finds itself as an exaggerated, almost drag-like, acknowledgement of the remarkable life of Feral Benga – a Senegalese dancer and largely sought-after model during the Harlem Renaissance. Although not much is known about Benga, Ruga is not the first to immortalise the exotic dancer in art. However, for Ruga, Feral Benga becomes a symbol of iconoclasm, inserting him into a monumental sculpture – ultimately, ‘to make blessed’. 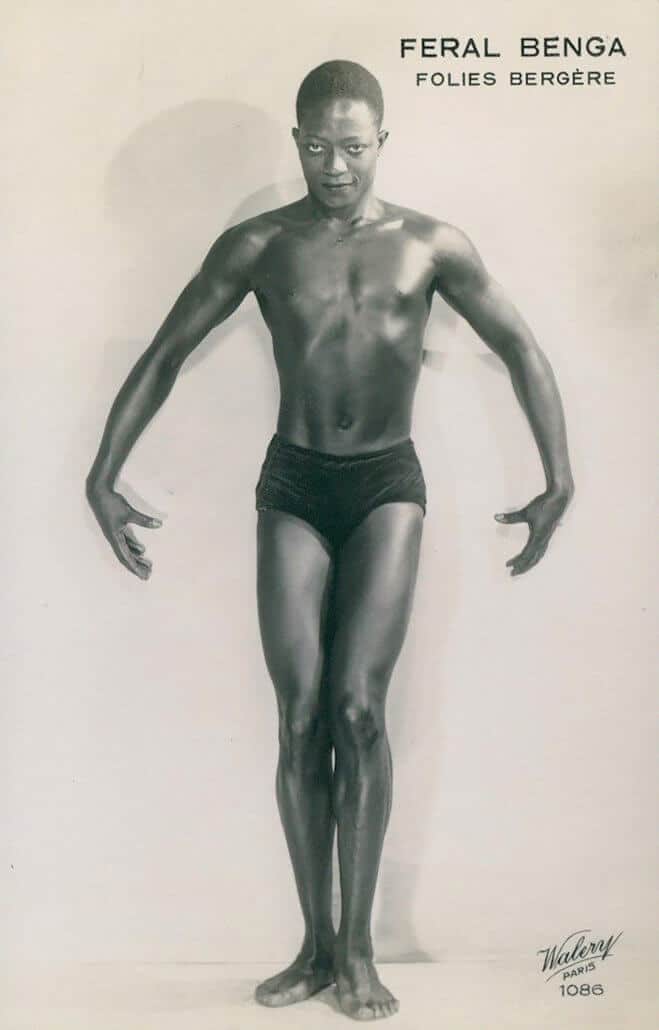 Portrait of Feral Benga by Walery of Paris (Circa 1930)

While ‘The Beatification of Feral Benga’ presents itself as a celebration of an exiled figure – both in how Benga was disowned by his father and largely written out of history – the series also makes a mockery of the idea of nationalism. Vulgarly dressing-up Benga in garish gold roses and crystals, Ruga has snarkily made a comparison between his work, and how we have, throughout history, memorialised and monumentalised figures like Rhodes.

Having grown up in South Africa’s Eastern Cape, with his mother based in the Ciskei and his dad working as a journalist in the Transkei, Ruga was always aware of the idea of resistance art. He was ten years old when Nelson Mandela became the country’s first democratically elected black president – and the ‘Rainbow Nation’ emerged to Ruga as “an Eldorado of sorts, a utopian tomorrow”.

It could be said that Ruga’s pantheon of gods and heroes began, too, when South Africa’s republic was born. Azania – an alternative name for South Africa, proposed during apartheid by supporters of a majority rule for the country; and interestingly, a Hebrew name which translates as ‘God is listening, God listens’ – somehow birthed this utopian ideal of the Rainbow Nation, “where Madiba was a god”.

And yet, growing up black, gay and non-Christian, Ruga would “look at the rainbow from the outside”. A bystander to the rape trial of Khwezi in 2006, and the xenophobic attacks in 2008, Ruga was witnessing the unravelling of this so-called ‘Rainbow Nation’ – as more and more disillusions with our heroes of the time began to emerge. Nationalism – at its core, perhaps, the desire for new utopias – was asinine, God was never listening.

Ruga created his own pantheon of gods and heroes. Inspired by the likes of Simon Nkoli – the founder of the Gay and Lesbian Association of the Witwatersrand (GLOW) – and Sarah Baartman, Tiyo Soga, Brenda Fassie, Nongqawuse, and his own maternal grandmother, to name a few, Ruga believes that there has been a lot of cultural production through exile. 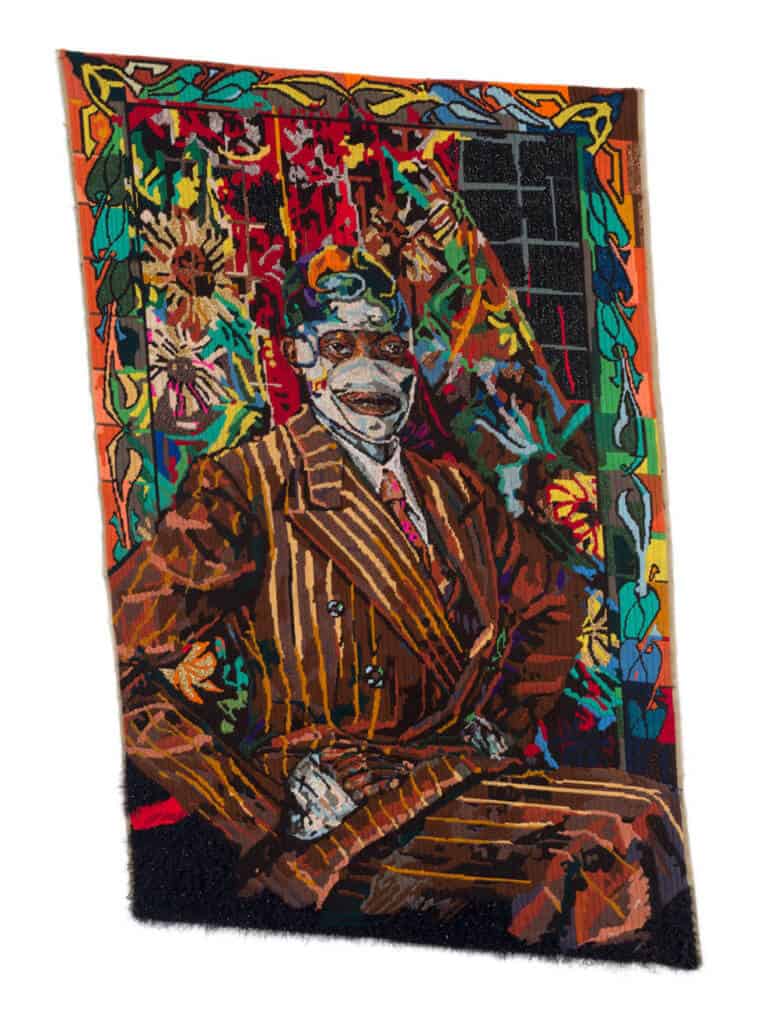 Omitted from western educational schoolbooks and university texts, these figures – both exiled during their lifetimes and in the carrying of history – have become the basis of Ruga’s ‘The Future White Women of Azania’, ‘Queens in Exile’ and ‘The Beatification of Feral Benga’. Their exclusion – that limbo between two ends – can be considered a Babylonian exile of sorts, allowing for ample reflection and thus creation. For Ruga, “images get lost, yet people keep stories – my work is a celebration of this”.

“Academia and the art world colluded in the omission and exile of these figures,” says Ruga. “The language of the art world is hyper masculine and violent. This violence begins in academia – the industry is complicit with so much bullshit.” In challenging these ills, Ruga overtly lives for his audience – claiming that the infrastructure and epistemic violence of the white cube can be broken down if we communicate with our audiences, and make it more accessible.

However, due to South Africa’s ‘smaller’ art market – Ruga hails the commercial aspect of the art world – commenting that individuals ‘receive’ his work, and exclaiming that because of this, “the market is fabulous!” He believes that the industry can do better, though, by entering into civil service, building standards within the secondary art market, and empowering the womxn involved in art.

Taking to ‘feminist’ characters throughout history, Ruga adds fantasy, parody, trickery and drag to his work – celebrating those exiled, and illustrating the many layers of the notion of utopia. He embraces both a personal and collective memory to provide a voice for the many silent and silenced narratives of South Africa’s past, and uses performance, digital art and photography to communicate past the epistemic violence of art history and academia. Certainly, Ruga’s ‘Of Gods, Rainbows and Omissions’ finds its strength in his belief that “freedom is not gained until everyone has it.”

Athi-Patra Ruga’s work will be up on exhibition at Somerset House in London, in conjunction with 1-54 Contemporary African Art Fair, from October 3rd 2018.