In an instance of synchronicity, the current Honours in Curatorship students have just returned from a whirlwind trip to Venice as Okwui Enwezor, the curator of the 56th International Art Exhibition La Biennale di Venezia, was awarded the degree of Doctorate of Literature, honoris causa, by the University of Cape Town. The honorary degree was conferred during the shared Humanities and Science mid-year graduation ceremony, on the 12 June 2015. 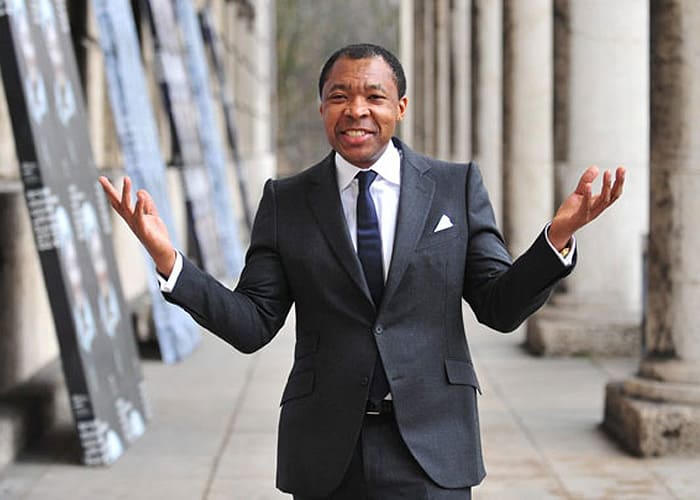 Enwezor (born 1963, Calabar, Nigeria) spoke to the graduands of his efforts throughout his wide-ranging career, from a Political Science student and Poet to a renowned critic, academic and curator, to redress the fact that African artists were under-represented in global exhibitions and the art market. As the first African curator of the Venice Biennale, Enwezor ensured African artists were given prominence and that of the 136 artists, from 53 countries in total, 89 have not shown at the Biennale previously.

Deciding on a title that incorporated plurality, namely All the World’s Futures, and a multifarious approach, Enwezor takes on the history and concepts of the one hundred and twenty years of the Biennale itself, as a filter. Since 1998, the Art Biennale includes not only the contribution of national pavilions, each with its own curator/s, but also The International Exhibition by the selected Biennale curator and many Collateral Events approved by the Biennale curator. For Enwezor, “The principal question the exhibition will pose is this: How can artists, thinkers, writers, composers, choreographers, singers, and musicians, through images, objects, words, movement, actions, lyrics, sound bring together publics in acts of looking, listening, responding, engaging, speaking in order to make sense of the current upheaval?”


These questions and concerns echoed in Enwezor’s address, this time focused on recent ‘Xenophobic’ attacks and attitudes as forms of afro-pessimism. In the face of this “disquiet”, Enwezor stated, “It is my firm belief that the best education gives an incentive and orientation for invention and self-examination. It provides us with the capacity to interrogate the state of the world into which we make our own contribution about the kind of society we wish to live in. It provides us with the tools and perspectives with which to transform our ideas into creative works that impact positively on the world around us.”


Enwezor has been the Director of the Haus der Kunst in Munich for the last 4 years, before which he was an adjunct curator at International Center of Photography, New York, and previously Dean of Academic Affairs, San Francisco Art Institute, San Francisco, as well visiting Professor in Art History University of Pittsburgh, Columbia University, and University of Illinois, Urbana-Champaign. Enwezor has been the Artistic Director of the greatly respected 2nd Johannesburg Biennale in South Africa (1996-1998), of documenta 11 in Kassel, Germany (1998-2002) as the first representative from a non-western country to hold this position, the Bienal Internacional de Arte Contemporáneo de Sevilla in Spain (2005-2007), the 7th Gwangju Biennale in South Korea (2008) and of the Triennal d’Art Contemporain of Paris at the Palais de Tokyo (2012). Enwezor has, of course, curated several notable exhibitions, including ECM: A Cultural Archaeology, Haus der Kunst, Munich; Rise and Fall of Apartheid: Photography and the Bureaucracy of Everyday Life, International Center of Photography, New York; The Short Century: Independence and Liberation Movements in Africa, 1945-1994, Museum Villa Stuck, Munich; Century City, Tate Modern, London. In 1994 he founded “NKA: Journal of Contemporary African Art” published by Duke University Press. He is the author of numerous essays and books, among others: Archive Fever: Uses of the Document in Contemporary Art (2008).

This article originally appeared on the Centre for Curating the Archive’s website, and can be accessed here.