‘On Migration and Materiality in Ireland’s ‘Post-Colonial’ Biennial’ by Allison K. Young

At the turn of the twentieth century, the Greek poet Constantine P. Cavafy was living in Alexandria, Egypt – then under British rule – when he penned a poem titled Waiting for the Barbarians (written in 1898, published in 1904). The poem’s subject is seemingly antiquarian – it invokes the edgling democracies of ancient Greece and Rome – but its political import was as relevant to Cavafy’s time as it is today. It tells of a despondent government that refuses to make progress, paralysed by anticipation of a fabled Barbarian invasion, which never happens. Cavafy muses on the causes and consequences of political inaction as well as the tendency for communities to self-define only in relation to a perceived ‘Other.’ “Now what’s going to happen to us without barbarians?” the narrator pleads, “Those people were a kind of solution.” 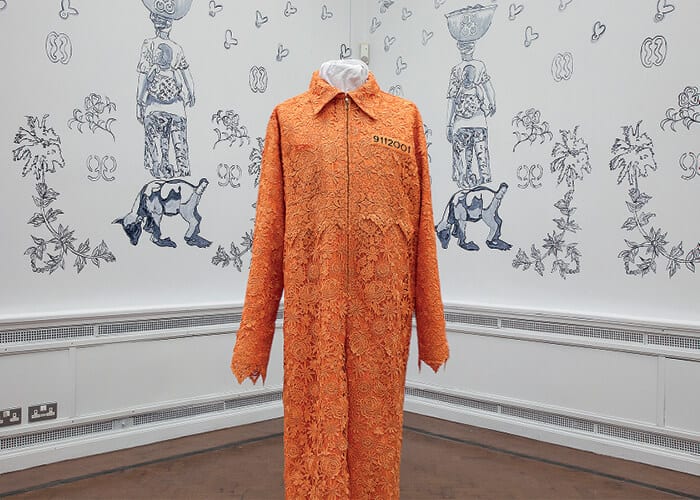 It is from this text that curator Koyo Kouoh has assembled the title of this year’s EVA International – Ireland’s Biennial of Contemporary Art. ‘Still (the) Barbarians’ begs consideration of some fraught questions for the 21st century: Who are the ‘barbarians’ today? Does the figure of the barbarian still exist in political and popular culture? While world leaders debate the erection of walls or the deportation of refugees, and as our political rhetoric grows increasingly divisive, the level of critical and ethical engagement that the exhibition performs – with questions of nation and migration, community and cosmopolitanism, and the aftermath of colonial violence – is more urgent now than ever. The fifty-seven participating artists treat these subjects with a high level of intelligence and visual sensitivity.

In Mary Evans’ cut-paper wall installation, Thousands Are Sailing (2016), a crowd of silhouetted figures stands idly, waiting in a long queue that eventually recedes into the distance. There are men, women and children, each barefoot and apparently naked. Pregnant women gently cradle their stomachs, while small infants crawl between the adults’ feet. On the opposite wall, a large boat carrying at least fourteen figures seems to voyage towards us, guided by a muscular rower at right. These motifs – waiting and sailing – are repeated across the four walls of images that surround the viewer, but they also echo tropes that exist in our present visual culture. Just a few days after the exhibition opened, a Pulitzer Prize in Photography was awarded to four New York Times photographers for their documentations of the ‘migrant crisis’ sweeping Europe at present. The most striking images depict flimsy boats carrying scores of refugees as they disembark on the shores of the Greek islands, only to wait to be ‘processed’ by reluctant host countries. 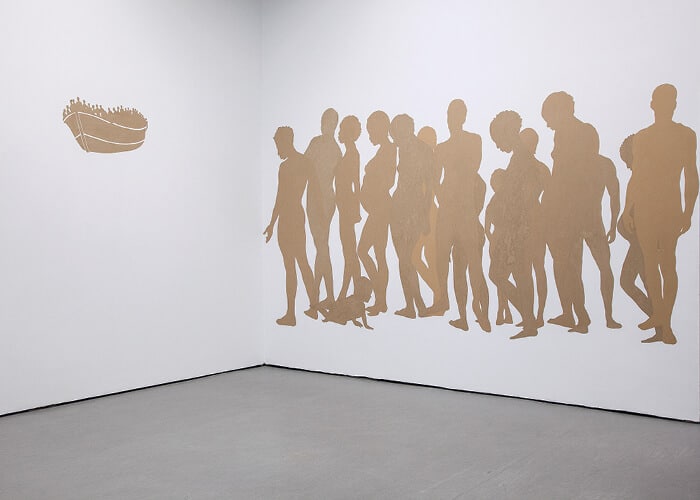 The imagery of boats invites reflection on the Middle Passage and on the journeys of refugees across the Mediterranean today. Thousands Are Sailing resonates with a host of recent international works on this topical theme outside of EVA – as in John Akomfrah’s recently acclaimed three-channel video installation Vertigo Sea (2015) that debuted at the 56th Venice Biennale, or Ai Weiwei’s controversial re-staging of a now-iconic photograph of the drowned infant Aylan Kurdi.

Yet, the title of Evans’ installation is borrowed from a 1988 song by the Celtic band The Pogues, which pays homage to Irish emigration to the United States. The artist, who was born in Nigeria but grew up in London, explains in her catalogue page that many of her closest childhood friends were Irish, Indian and Afro-Caribbean. This titular nod to Irish history and popular culture, then, invites an awareness of shared experiences across disparate historical and geographic sites, and testifies against the kind of ‘us and them’ worldview that Cavafy bemoans. As such, Evans’ installation is exemplary of Kouoh’s curatorial vision for ‘Still (the) Barbarians,’ which acknowledges the absence of post-colonial discourses in Ireland, the “first and foremost colonial laboratory of the British enterprise,” as the catalogue notes, but a nation that – by virtue of its location in Western Europe – has not conceived of itself as ‘post-colonial’ to the same degree as countries in Africa, Southeast Asia, the Middle East or South America. The Cameroonian-born curator brings a transnational dialogue to Ireland about subjugation, resistance and independence. This is a potentially subversive gesture but on the centenary of the 1916 Easter Rising, these themes seem particularly apposite to the local context of the biennial. 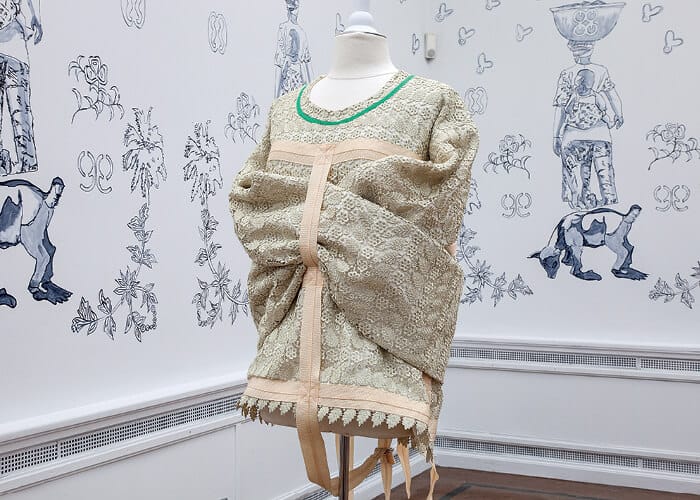 Godfried Donkor’s installation, Rebel Madonna Lace Collection (2016), also draws material connections between Ireland and Africa. Donkor extends his ongoing interest in the global production of textiles to the local context of Limerick, where embroidered-needle lace has been a regional specialisation since the nineteenth century. The artist designed a new lace piece depicting an African woman surrounded by adinkra symbols and botanical patterning, which was handmade by six local lace-makers, a process that requires hundreds of hours of labour. While aesthetically exquisite, the work also calls attention to the unsavoury history of child labour and exploitation that once characterised lace production in Ireland. Donkor also produced two new garments using commercial lace in Ghana, where the material is popular in men’s fashions; one resembles a straightjacket, while the other, a bright orange jumpsuit, recalls a Guantanamo Bay prisoner’s uniform. As Donkor explained to ART AFRICA, some Guantanamo prisoners have recently been cleared by the Pentagon and sent to West Africa. The installation, as such, charts the dispersal – whether forced or organic – of materials, images and even individuals across political, visual and economic networks. Nearby his installation, paintings from Bradley McCallum’s ‘Weights and Measures’ series scrutinise the faces of defendants in the International Criminal Court for expressions of corruption, power or culpability. Romanian artists Mona Vatamanu and Florin Tudor present colourful textile maps that visualise economic data such as levels of national debt or main regional exports. The hand-sewn aesthetic counter-balances the impersonal nature of the statistical content. The works in this display balance and complicate themes of guilt and innocence, exploitation and powerlessness and, perhaps, the hidden links between consumerism and complicity. 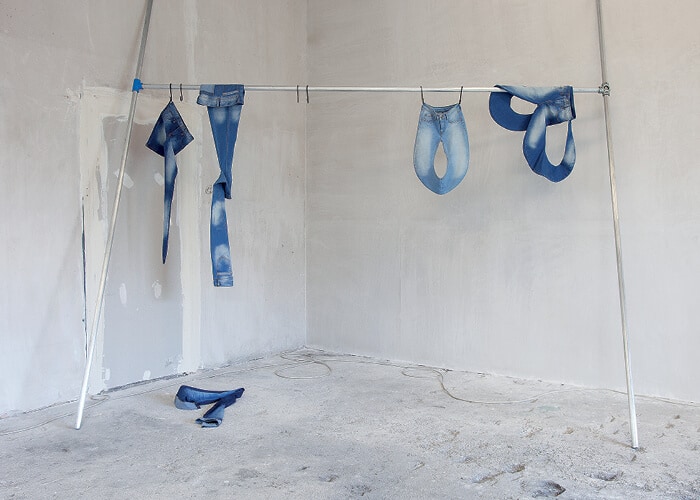 Sculptural and textile works are noticeably prominent throughout ‘Still (the) Barbarians,’ and lend themselves to materialist explorations of post-coloniality and global capitalism. Otobong Nkanga’s radiant tapestry The Weight of Scars (2015), rendered in terracotta and cerulean hues, incorporates photographic images of an abandoned industrial complex in Namibia; its composition recalls molecular diagrams or network visualisations. Willem de Rooij’s Blue to Black (2012) and Black to Blue (2016) are five hundred and fifty millimeter-long textiles laid flat beside one another. Blue to Black is a waxprint produced in Ghana, and Black to Blue is a traditional Indonesian batik, hand-printed in Yogyakarta. Together, they reference the colonial trade of textiles between Asia, Europe and Africa. Jeremy Hutchinson’s Fabrications (2013), features blue jeans with the legs sewn together or in other miscon gurations; these were manufactured in a denim factory in the West Bank and represent the psychological effects of living and working in Palestine under constant military surveillance. Uriel Orlow’s Grey, Green, Gold (2015-16) is inspired by ecological metaphors for colonialism and apartheid: the garden planted by Nelson Mandela in Robben Island, or the changes to the Western Cape’s ecosystem caused by contact with invasive species brought to South Africa by Cecil John Rhodes. Each of these projects highlights forms of material interdependence, whether historical or contemporary, and the impacts on both global politics and local economies. 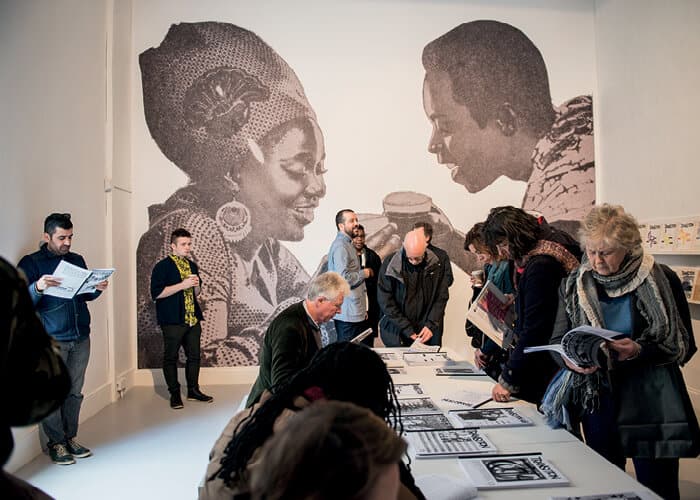 In ‘Murder Machine,’ an exhibition curated by Christine Eyene for EVA, archival displays demonstrate the circulation of images and printed matter. The Otolith Group’s collection of Transition magazines testifies to radical Afro-Diasporic intellectual networks. A stunning suite of photographs by Cape Town-born photographer George Hallett, which documents the African exile community in 1970s London, is also on view. Nearby, Eyene presents a collection of books from the African Writers Series whose covers feature Hallett’s photographs, demonstrating the ways in which images are transformed by the process of dissemination.

Some of the books in Eyene’s display feature iconic photographs of the 1976 Soweto Uprising, an anti-apartheid demonstration motivated by the enforcement of the Afrikaans language as a strategy of cultural dispossession. The significance of language is another key theme throughout ‘Still (the) Barbarians,’ so much so that Kouoh insisted on printing the catalogue texts in Irish translation for the rst time in the history of EVA. She hopes this gesture can aid in the reclamation of Ireland’s identity and culture. 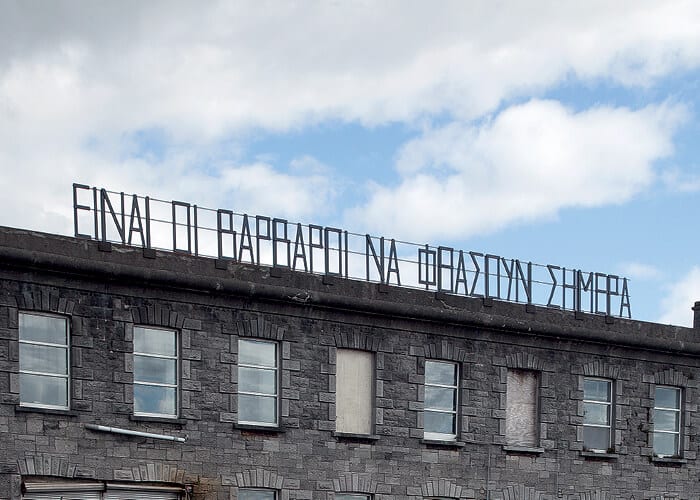 Kostas Bassanos, In Search of the Exotic, 2016. Installation, dimensions variable. Courtesy of the artist and EVA International.

In this spirit, Kostas Bassanos’ site-specific installation, In Search of the Exotic (2016), presents Cavafy’s text in Greek, the language in which the poem first appeared. Today, references to Greece are also fraught with associations with economic crisis in the EU or the zone of contact between Syrian refugees and the shores of Europe, contexts that make his intervention all the more pressing. On the concrete façades of Cleeve’s Condensed Milk Factory, which served as a main production site for the export of cheese throughout the British Empire, Bassanos has installed painted wood panels that spell out the phrase, “EINAI OI BAPBAPOI NA ΦΘAΣOYN ΣHMEPA” (‘The barbarians are due here today’). It is a call to honour cultural tradition but also to avoid divisive politics and, most of all, to resist apathy and inaction.