How an artist uses digital technology to shed light on a practice that affects more than 200 million women and girls alive today.

Convincing women and girls to speak about their experiences of Female Genital Mutilation (FGM) is hard. There is a culture of silence surrounding the issue and the fear of stigmatisation, victimisation, and rejection is deeply embedded in this culture.

FGM involves the partial or total removal of the external female genitalia or other injury to the female organs for non-medical reasons. It is most prevalent across Africa, the Middle East, parts of Asia, and is also practiced among some communities in Eastern Europe and Latin America. In recent years, the practice has emerged in Europe, Australia, New Zealand and North America due to immigration and refugee populations. 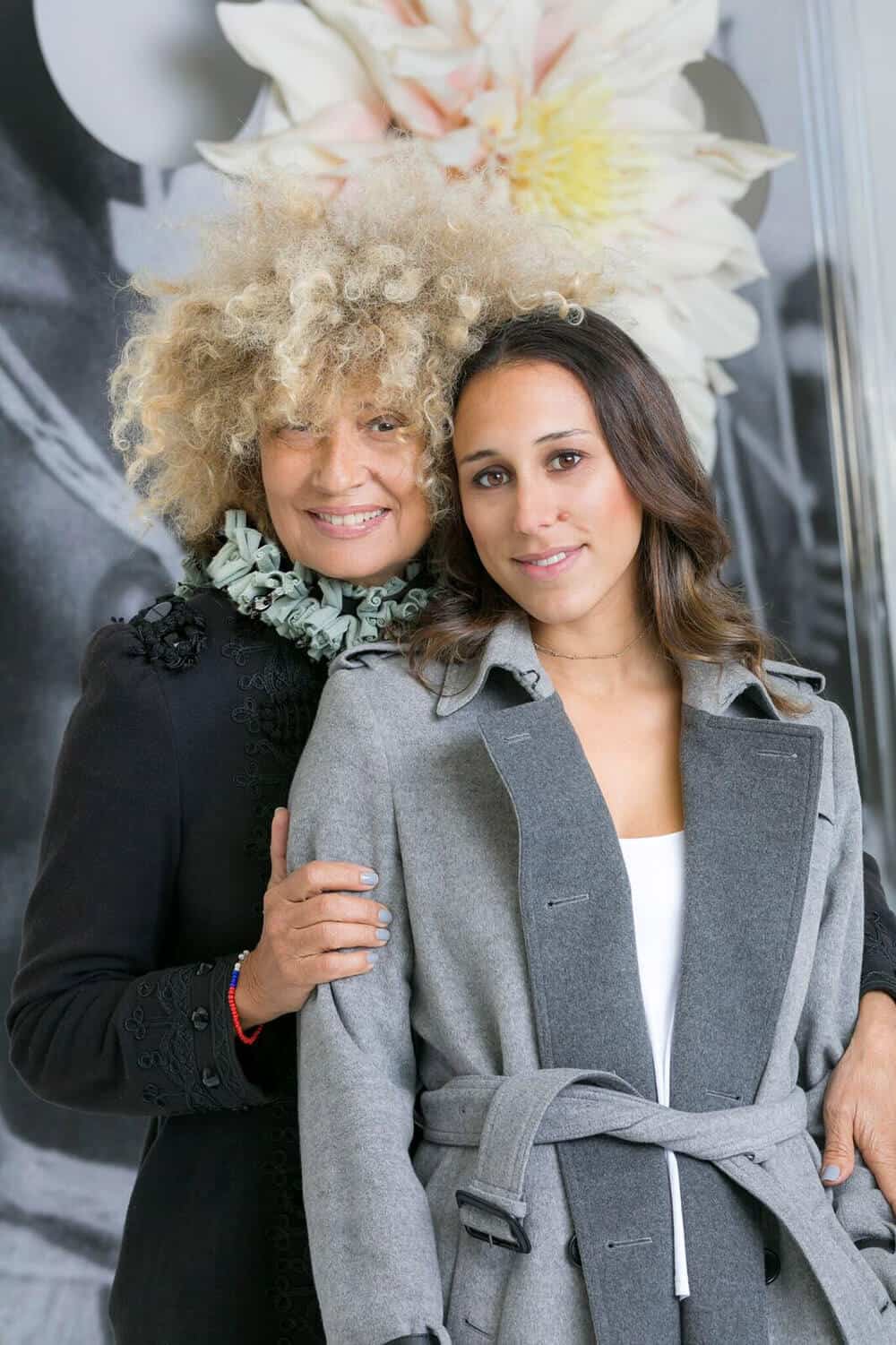 Owanto (left) and Katya Berger (right), 2018. The filiation between mother and daughter, artist and producer. Courtesy of the artist.

Countries are responding first-hand to the medical and obstetric complications of FGM in their hospitals — such as trauma, urinary tract infections, menstrual problems, complications giving birth and perinatal risks — and treatment sought by women is a major source of concern among health care providers. Laws criminalising the practice have been enforced in 42 countries, including 24 nations in Africa, according to the United Nations Population Fund. But the abuse and silence continues.

When Gabonese contemporary artist Owanto discovered old photographs of an FGM ceremony in a family album she inherited, she gently put them away in what she refers to as “the forgotten drawer”. She was disturbed by such a discovery. Days later, she returned to the forgotten drawer and began to question the existence of these photographs. She quickly learned that FGM is a global phenomenon that is still very present in today’s society and was compelled to act.

Globally, at least 200 million girls and women, alive today, have undergone FGM and an estimated 3 million girls are at risk of undergoing FGM every year, according to the World Health Organisation. The majority of girls are under the age of fifteen.

The practice affects over half a million women and girls on American soil each year, according to the Population Reference Bureau, and an estimated 180,000 women and girls are at risk in Europe, says the European Network to end FGM.

“I understood that these images taken by a Westerner during the colonial era, perceived as voyeurism, could be elevated to the rank of art and activism, and used as a force for good if taken in the right direction,” said Owanto, the first Sub-Saharan contemporary artist to hold a solo show at the Venice Biennale. Her art today is dedicated to social and gender issues.

In Flowers Series Owanto enlarges the photographs to 3×3 meters high and poetically covers the wound with a sculpted flower. These photographs depict a celebration and a ceremony, a before and an after, joy and pain. The ambiguity portrayed in these images represents the complexity of a practice that manifests in various ways and for various reasons. Hence why it is difficult to eradicate.

Today, FGM remains a subject of secrecy and taboo. For many survivors, speaking out is not an option as the consequences are far too serious. It is seen as offensive, shameful and a dishonour to families and communities. While some fear stigmatisation, others fear rejection. Thus, women and girls continue to suffer in silence and the practice lives on.

Owanto felt she had a duty to expose these photographs to the world. La Jeune Fille à La Fleur, an iconic image from Flowers Series, is currently on show at the Zeitz MOCAA in Cape Town, the largest institution of contemporary art on the Africa continent. In this space, art becomes a weapon against violence and a catalyst for change.

In many cultures, FGM is seen as a celebration, a ceremony, a rite of passage. It is viewed as a symbol of chastity and purity, a way to control sexual desire, and a means to elevate a woman to higher social status. It is also seen as a bridge for social acceptance and marriage. Despite popular belief, it has no basis in religion. FGM predates Christianity and Islam and is practiced among communities of different faiths.

One Thousand Voices is an audio art installation which stands in solidarity with those affected by FGM and breaks the taboo of silence surrounding the issue. The project is a collection of audio testimonies from FGM survivors from all over the world and captures the global magnitude of the practice. It includes countries such as Kenya, Tanzania, Somalia, Sierra Leone, Nigeria, Gambia, Mauritania, India, Singapore, Bahrain, Iran, Egypt, UK, Germany, USA and Canada.

“I believed it was vital to link the visual images from the 1940s in Flowers Series with the sound images, describing contemporary society, in One Thousand Voices. I thought it was vital to weave the past with the present, the analogue with the digital, the artistic with the journalistic” says Owanto.

Cultures of abuse are often met with cultures of silence, and abusers are often supported by systems of beliefs that protect them from their crimes. In order to fight the stigma, to sensitise entire communities on the effects of these crimes, and to empower women and girls, an army of voices must come together to tackle these very systems of beliefs.

The silencing of women and girls affected by FGM, can be compared to the silencing of other forms of gender-based violence and human rights violations such as sexual abuse.

Following the inauguration of President Trump, millions of people fled to the streets in January 2017 to march in protest of a system that left many feeling powerless. Hundreds of thousands marched again last month to mark the one-year anniversary of that day and to demand social and political change.

The onslaught of sexual harassment and assault claims following the Harvey Weinstein allegations in October 2017 — which had surfaced among political, tech and media circles in the months prior— and the ensuing #MeToo and #TimesUp movement are by no means dissociated. Only now are women realising that their voices matter, that they can break the silence, and that they will incite change.

This collective outcry demonstrates a global sense of solidarity in light of recent events and proves that there is strength in numbers. It proves that women can and will be heard for the injustices and violence they are subjected to, and demonstrates the speed and strength at which movements are formed across the internet.

“I think it will be very transforming if leaders step up and make it clear that FGM is not our culture, is not part of our religion, and is not part of the legacy we want to leave behind for the next generation,” testifies Filzah Sumartono, an anti-FGM activist and survivor from the Malay Community in Singapore.

While the flower plays a healing role and attempts to metaphorically change the narrative — from victim to heroine — in La Jeune Fille à La Fleur, the collective voice of women and girls united to say “no more” in One Thousand Voices breaks the silence and literally changes the narrative.

Owanto will honor La Jeune Fille à La Fleur and will introduce ‘One Thousand Voices’ at the Zeitz Museum of Contemporary Art Africa (MOCAA) in Cape Town for International Day of Zero Tolerance for FGM. The artist will give daily public tours of her work (4th-8th February ) and will hold a public discussion with Azu Nwagbogu, Director of the African Artists’ Foundation and LagosPhoto, on the role of art for change during Cape Town Art Fair the following week (16th-18th February).

“I believe culture is not static, but ever-changing. I am determined to bring the conversation into the sphere of art, culture and education in order to provoke change,” said Owanto.

Featured Image: Owanto (left) and Katya Berger (right), 2018. The filiation between mother and daughter, artist and producer. Courtesy of the artist.