‘Orda716:’ In Conversation with Kilmany-Jo Liversage

Kilmany Jo-Liversage has got quite a line-up of significant shows this year, from the Johannesburg Art Fair to the Moniker Art Fair in London. These events come off the back of two simultaneous solo exhibitions entitled ‘Orda716,’ to be held at Lizamore and Associates (Johannesburg) from 30th June and at Worldart (Cape Town) from the 7th July. ART AFRICA spoke to the artist about her new body of work. 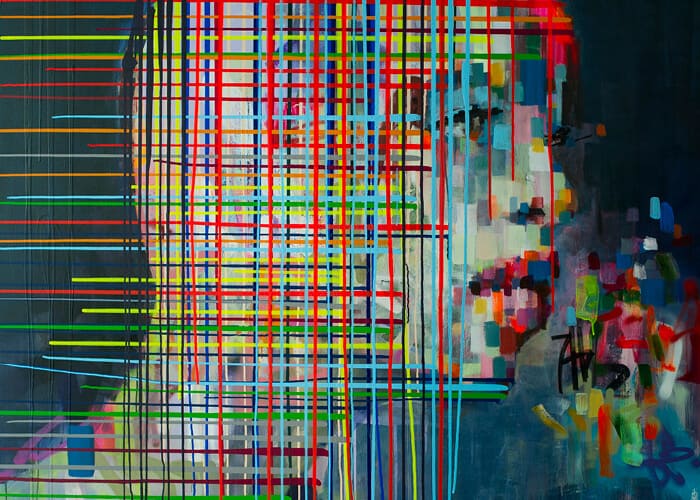 Please tell us about your latest body of work, which will be on show at Lizamore & Associates (Johannesburg) from 30th June and at Worldart (Cape Town) from 7th July?

Having carved out a unique style of art-making that sits at the increasingly blurry boundary between fine art and graffiti, my new solo exhibition, ‘Orda716,’ consists of portraits that continue in this vein, while further harnessing urban influences.

The title, ‘Orda716,’ refers to my street-name ‘Orda,’ and the month and year of the exhibition. Orda started in 2000 when I used to work with ribbons and chopstick pieces. There was a lot of ‘order’ in the making process. It also references digitised mass production and a futuristic post-human world, populated by perfect-looking female cyborgs, as depicted in my portraits. The result is a series of brightly coloured large-scale paintings, evoking the street, art history and the future. 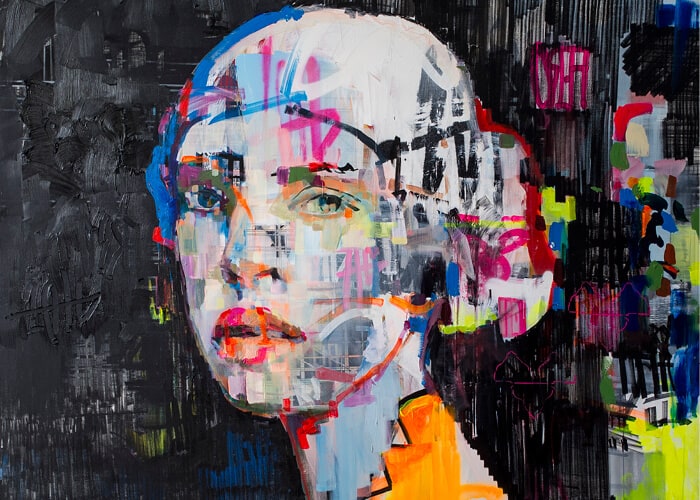 Often referred to as ‘iconic’ and ‘recognisable,’ your portraits manage to capture elements from the saturated, ‘universal’ realm of mass-media and merge these onto everyday subjects. What is it about this juxtaposition that interests you?

I find my images from social media or through portraiture, taking photos of friends or people who I find interesting. I use these images as reference points that I then rework. I have a bright, neon-like palette which is where I play with the futuristic element. These bright colours are a bit like social media – they’re in your face.

It also has a lot to do with the poses. The faces of the women have this translucent element. They’re staring at you but they’re not staring at you. They’re idolised, strong women that have this symbolism about them which is almost mother-like. I think with certain works it depends on the pose and the feeling of the face I’m portraying. In one of my new works I completely muted and skin-toned the background, which is something I never do. In other paintings it’s almost like the canvas is my palette and I use those colours in the face and then put them back into the background. Some are loud and noisey and others are more quiet. It’s just me reinventing myself as an artist.

Do you see yourself in these various faces? Are they, to some extent, self-portraits?

I think it’s my alter-ego. Being a woman it’s definitely something that I relate to. As an artist I’ve always had a form of activism. I’ve worked with AIDS ribbons, with abuse, I’ve done a few street related projects where I had things to say regarding women issues. I have a big interest in portraying strong women, women who have this femme-fatalistic element. That’s maybe part of me and yes, it’s definitely something I feel strongly about and something I portray in the women. 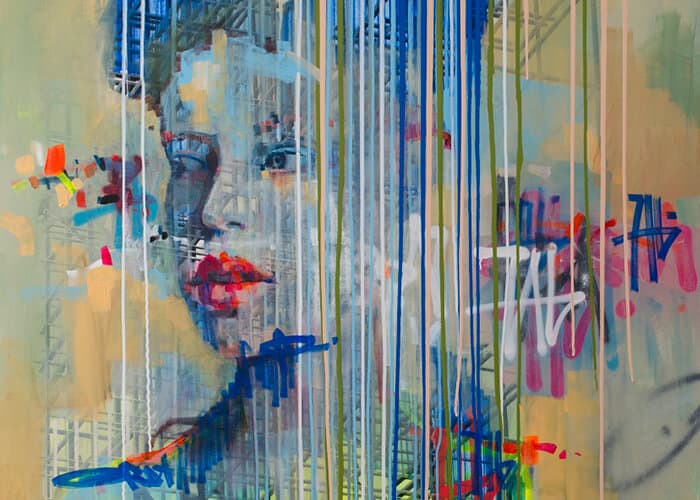 As a reflection of society, your work has always revolved around an attention to surface, often layered-yet-flat. Your new body of work appears to go one step further, exposing a kind of ‘scaffolding’ onto which your portraits are built. There were elements of this in your earlier work, but it seems to be much more prevalent now. What brought about this shift?

I’m an artist who is interested in the process making. Adopting the graffiti or urban art language allowed me to update, renew and challenge the conventions of painting.

In particular, this new series of twenty-four paintings are marked by the depiction of building scaffolding, which forms the backdrop and basis for my mostly female portraits, inspired by Renaissance era portraiture. This enhances my reference to the urban landscape, evoking billboards and construction sites. On metaphorical and literal levels, it addresses my interest in the (re)construction of images and the self.

I think the reason I’m interested in construction is that idea of invention, of constructing ourselves. It’s the way mass media is, like billboards which get built up and then broken down. Everything is disposal. 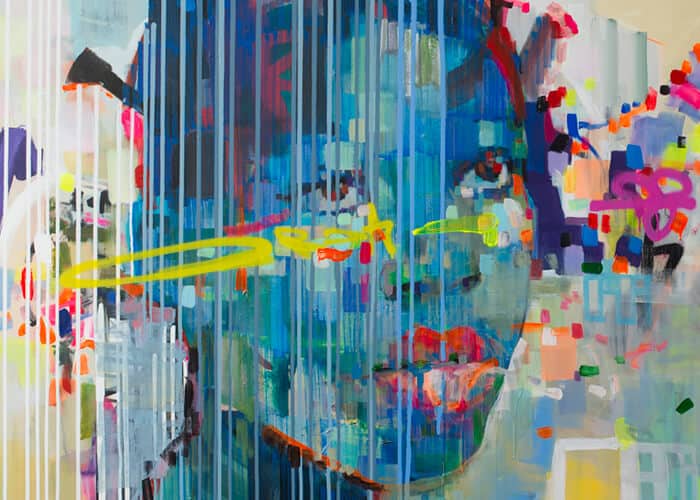 In an article titled ‘This Day and Age,’ Ashraf Jamal refers to your work as a “generic, synthetically sweetened additive.” To what extent is this interpretation of the work intended to mimic our consumption of mass-produced imagery – and as an artist who works in both public and private spaces ­– how is this message translated from one space to the next?

My portraiture is defined by the seemingly contradictory process of constructing and deconstructing images. This latter quality is enabled by the spontaneous, ‘loud’ neon lines and disruptive graffiti gestures that mimic the way in which street artists enact rebellions and state their identity and positions in the public. 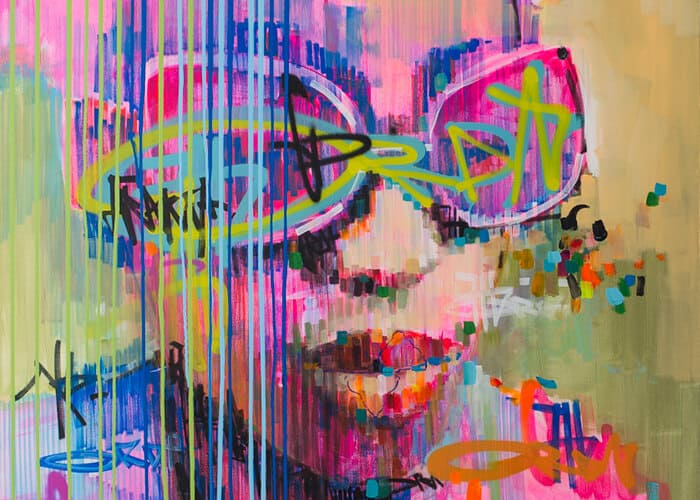 What is the difference between creating stuff on the street, versus for the gallery space? Do you have a different approach for both?

Street art is a much faster process. When I do mural work I reference from my paintings, but it’s on a larger scale. It changes my process making. I use a lot more spray and graffiti because that’s what people relate to. Yes I’m a fine artist, and I show that part of me, but I also have cross references of urban and street art. Putting the two together to create a mural of such a large format is different.

Finally, what can we expect to see from you in the near future?

After these shows I’m going to be showing at the Johannesburg Art Fair, as well as the Moniker Art Fair in London, which is a graffiti-based fair. I’m also going to be doing two sponsored jobs, making murals in Canada and Chicago for Nandos.

Orda716′ will be held at Lizamore & Associates, Johannesburg, from the 30th June 2016 and at Worldart, Cape Town for the 7th July 2016. Her work will also be on show at the Johannesburg Art Fair and at Moniker Art Fair, London.