Out of History: Artists, Landscapes and New ‘Practices of Self’ in Southern Africa

Review of Landscapes Between Then and Now: Recent Histories in Southern African Photography, Performance and Video Art (2020) by Nicola Brandt

In her bold exploration of Landscapes Between Then and Now, the Namibian cross-disciplinary artist and scholar Nicola Brandt explores the work of a range of photographers and artists engaging with themes of identity and landscape in the wider sense of geography, space, place, built and ‘natural’ environments. 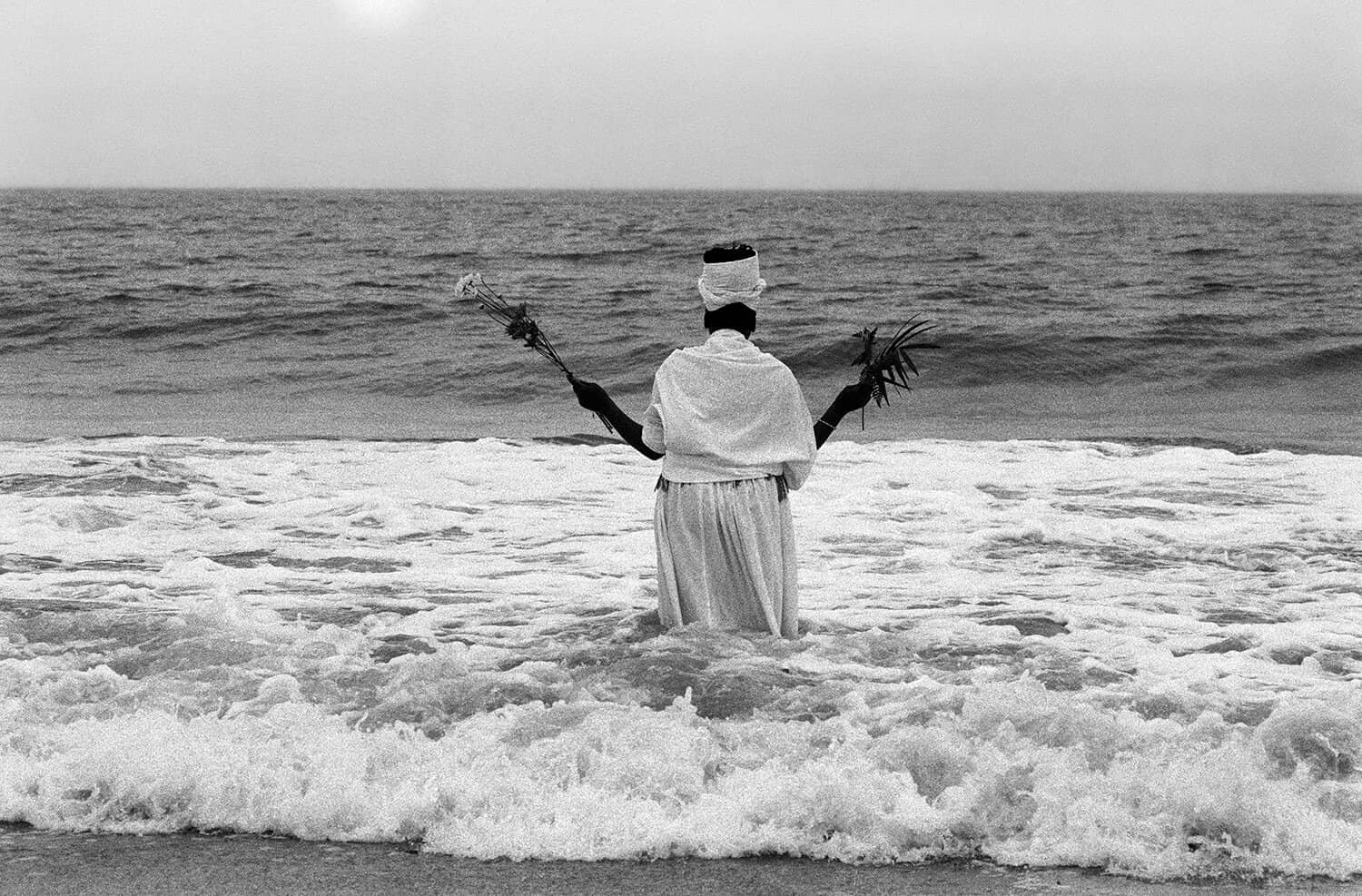 Andrew Tshabangu, Tribute to the Ancestors of the Middle Passage from Water Is Ours, 1999. Courtesy of Gallery MOMO.

The South African photographer Santu Mofokeng’s poignant evocation of the metaphorical powers of landscape in his black-and-white photography and writings provides the conceptual backdrop of this timely book. Brandt offers a detailed account of Mofokeng’s evolving relationship with imperial and apartheid legacies of land and landscape in order to ‘symbolically reclaim the land’ with his camera in the post-apartheid era.

Landscape is not geography, certainly not in the romantic sense. It is about your view, where you live, where you die, that is your landscape.

Brandt goes on to describe Mofokeng’s eventual rejection of what he regards as a western gaze upon the land – what he refers to as a ‘God complex’. This slow-motion rupture provides the perfect analogy for one of the central concerns in Brandt’s book. The well-known phenomenon of how white settler’s perception of land and the subsequent ‘production of space’ – also through artistic means – was used as a means to possess the land and enforce colonial values not only onto the land, but also onto those already living there. The author explores Mofokeng’s eventual rejection of this understanding, reflecting rather on his own embodied experience of coming of age in South Africa: ‘Landscape is not geography, certainly not in the romantic sense. It is about your view, where you live, where you die, that is your landscape.’ Through this decolonial lens, and a close awareness of the role that positionality plays in photography, Brandt examines the work of Mofokeng’s contemporaries including the influential legacy of David Goldblatt and how it is possible to chart the emergence of a critical landscape approach from Goldblatt’s social documentary work during the apartheid years to his work produced in the post-apartheid era. 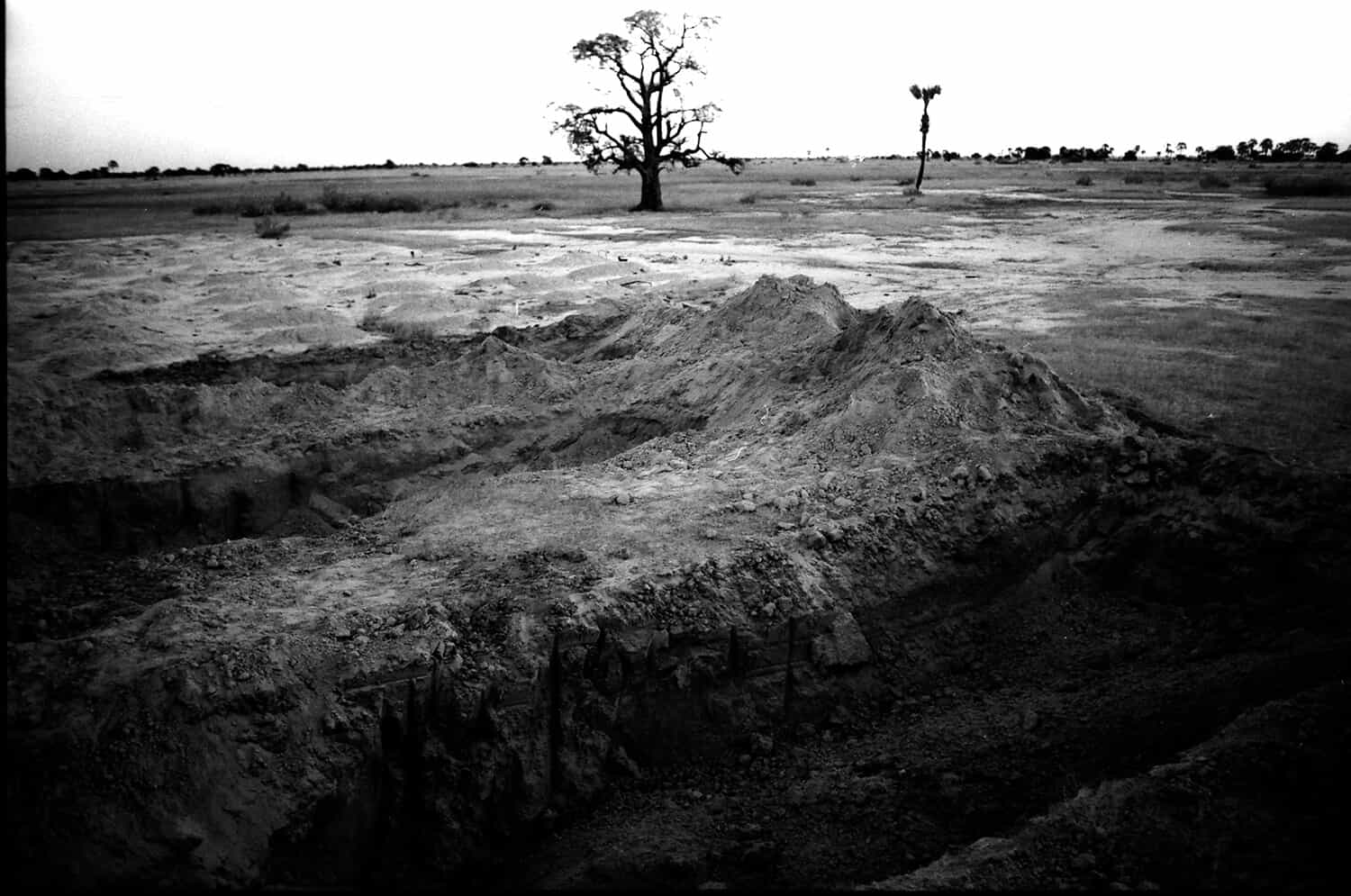 John Liebenberg, The grave site at Uupindi photographed a few weeks after the burial of SWAPO guerrillas, with shallow graves in the background and an omwandi tree, from the series The Crucifixion, 1989. © John Liebenberg.

Landscapes Between Then and Now also importantly reflects on the historical and present-day entanglements between Namibia, South Africa and Angola. Through the study of specific images from the 1980s, Brandt proposes that the photojournalist John Liebenberg’s haunted landscapes taken during Namibia’s War of Independence such as The Valley of Death (1987) and The grave site at Uupindi (1989) are some of the first examples of documentary aftermath landscapes produced in the region, but also point to the unresolved legacies of this painful time in the region’s history. Throughout the book, Brandt repeatedly demonstrates how the present is punctuated with the past and how in particular Mofokeng who, like Liebenberg, passed away only recently, left a particularly strong legacy.

While simultaneously grappling with legacies of trauma and oppression, these artists chose cross-disciplinary mediums – and often use their own bodies and the idea of the collective to (re)claim space and the narratives associated with physical sites. 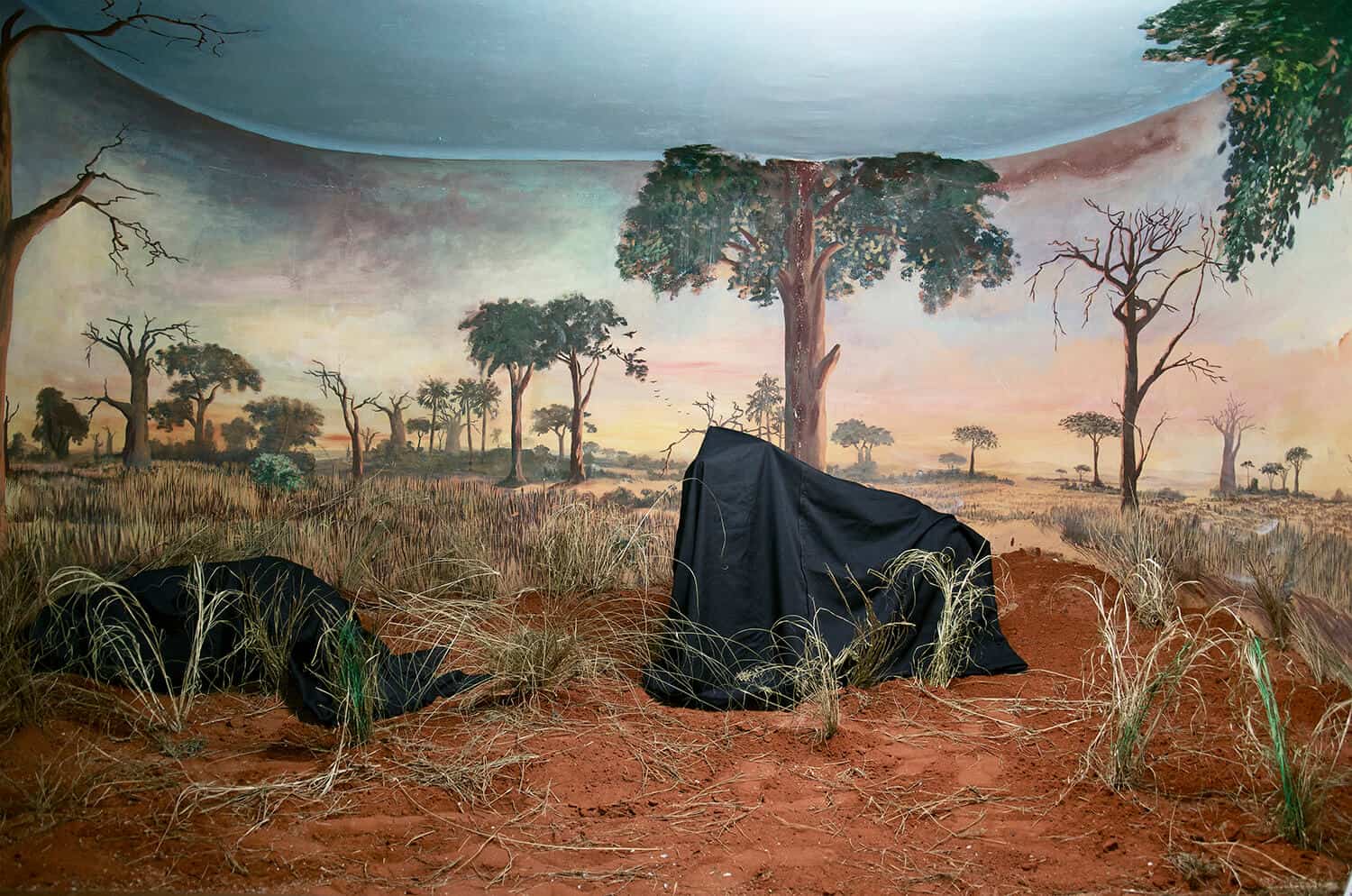 Kiluanji Kia Henda, In the Days of a Dark Safari #4, 2017. Courtesy of the artist and Goodman Gallery.

Mofokeng’s ideas of embodiment in the landscape provide the perfect segue into the second half of the book. Brandt describes new “practices of self” that have progressively emerged over the past two decades in the region, especially in the work of a number of Black artists and artists of Colour. For example, in the public (counter-)memorial works of Kiluanji Kai Henda (Angola) or the site-performance work Chapungu – The Day Rhodes Fell (2015) of Sethembile Msezane (South Africa). In the Namibian context, Brandt charts new genealogies and highlights the novelty of various contemporary artists from Nashilongweshipwe Mushaandja’s performative queering of historical and social spaces, or Isabel Katjavivi’s memory landscapes linked to the Namibian Genocide (1904-1908). While simultaneously grappling with legacies of trauma and oppression, these artists chose cross-disciplinary mediums – and often use their own bodies and the idea of the collective to (re)claim space and the narratives associated with physical sites. The site-specific work entitled The Mourning (2016) and The Mourning Citizen (2019) performed at the Old German Fort in Windhoek, the capital of Namibia, are key examples of this. 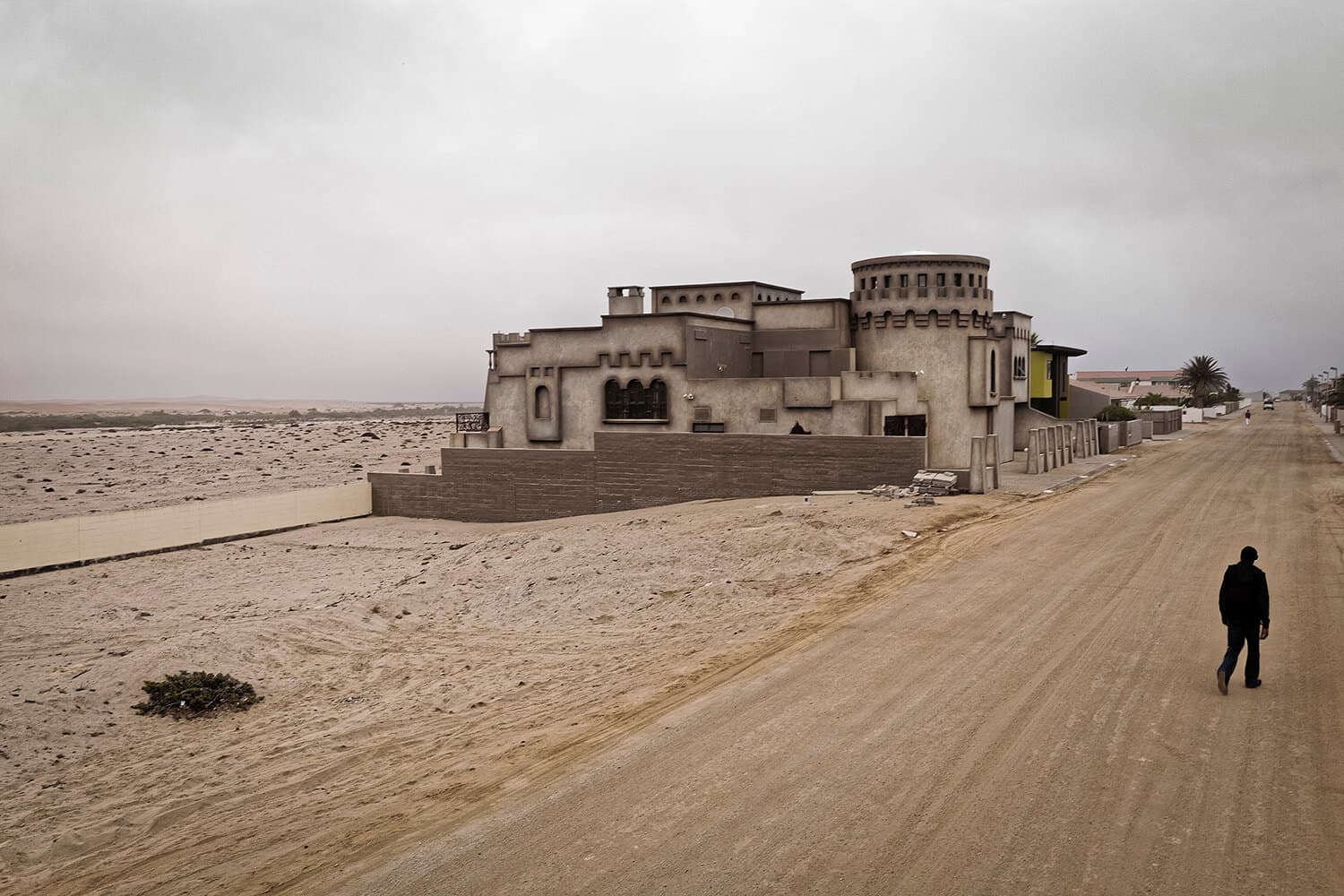 Nicola Brandt, Next to the Graves, Swakopmund, 2012. A private residence in Riverside Road, Swakopmund, built directly next to unidentified graves of Herero and Nama prisoners-of-war who died during the German-Namibian War and Genocide (1904-1908). © Nicola Brandt.

…the European tradition of the landscape was closely connected to acts of violent erasure.

Before publishing this book, Brandt’s artwork has enriched this discursive ‘landscape’ in her own way. In one of her earlier, large-scale photographs Next to the Graves (2012), the artist ‘documented’ the violent stillness of one of the villa fortresses which sprang up after Independence on the grounds of the former Old Location of Swakopmund along the Namibian coast and now overlooks the African cemetery originating from the German Genocide. In Brandt’s acclaimed multi-screen video installation Indifference (2014), critically revisited in her book, the lived experiences and memories of a Herero and a German woman – both residing in Swakopmund – shine dark as they reference the town’s or the Namib desert’s reverberations of the Genocide. Whilst ‘imperfect in praxis,’ as she explains, ‘much single authoritative voice-overs are avoided, positions are opened up to multiple screens or “disjunctive montage aesthetics” are drawn on in order to assist in breaking down dominant languages.’ Brandt, herself a descendent of white European settlers sensitively reflects on how the European tradition of the landscape was closely connected to acts of violent erasure. By critically engaging with what might appear invisible in these spaces, the artist’s hope is that we might reflect on the past and processes of memorialization differently, but also imagine and embrace diverse voices and performative interventions within it. 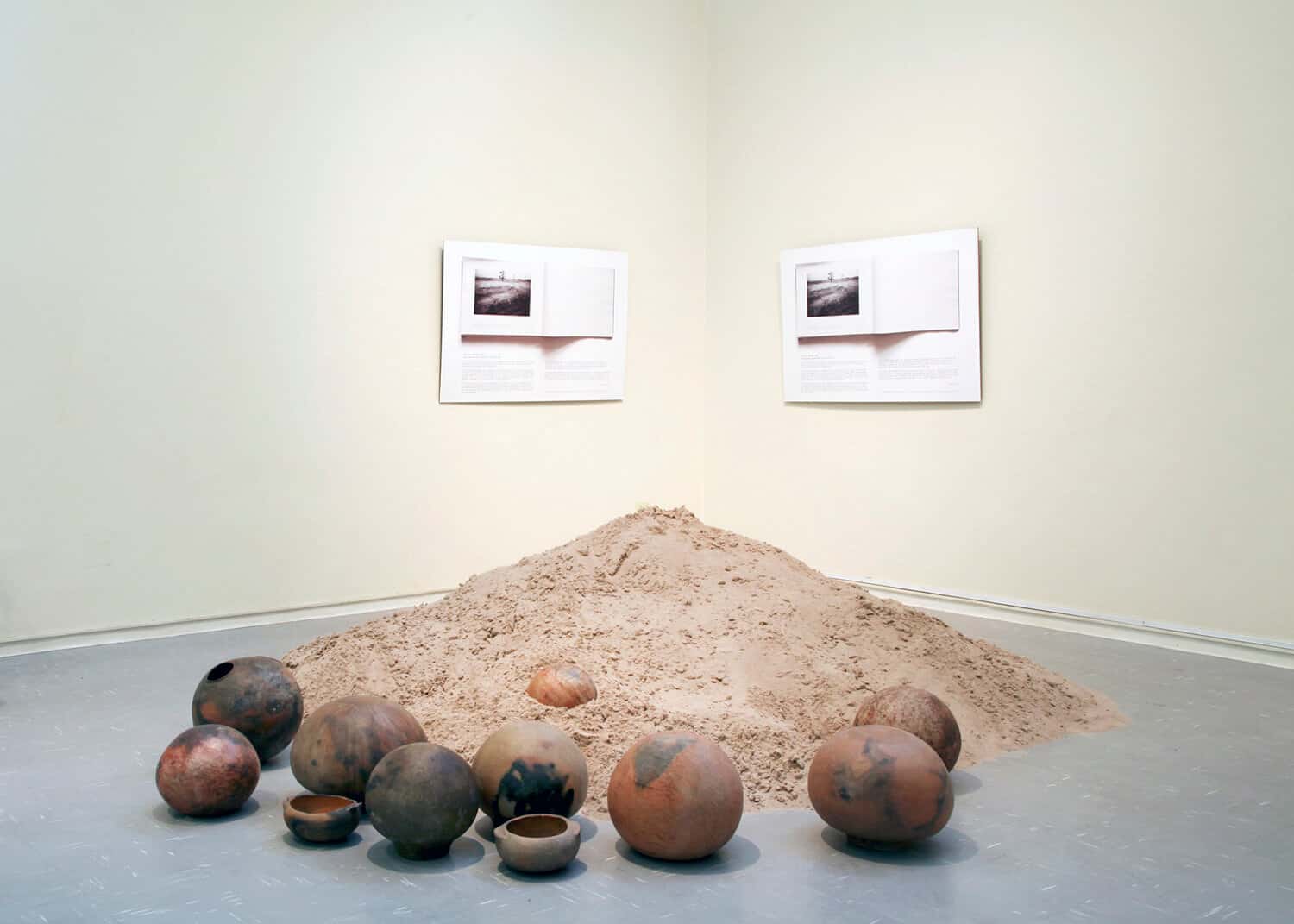 Nicola Brandt, Under an Omwandi Tree. After John Liebenberg’s The Crucifixion series taken at Uupindi in 1989, 2013. Installation: sand from close to the region of Uupindi, clay pots and photographs. The National Art Gallery of Namibia. © Nicola Brandt.

Landscapes Between Then and Now highlights a fascinating multiplicity of new ‘practices of self’, and how artists envision and, crucially, embody positions and landscapes. Their personal, sometimes collectively shared histories become powerful archives with which to imagine, map and represent new geographies, temporalities and identities.