Over The Rainbow: In Conversation with Athi-Patra Ruga

ART AFRICA had the opportunity to sit down with performance artist Athi-Patra Ruga just before his performance at the 2016 Performa Gala in New York. In this interview Ruga talks about his avatars, the performing body, and his artistic practice.

Athi-Patra Ruga, performance of Over the Rainbow as Versatile Queen Ivy for Performa Gala 2016, New York. All images by Max/Lakner/BFA.com. Courtesy of Performa.

ART AFRICA: Throughout the course of your career your work has resembled a slow and steady metamorphosis, tying in new themes and expanding on old ones. As the latest installment, please tell us more about Over the Rainbow?

Athi-Patra Ruga: A rose by any other name would be a cabbage. I will add to that and say my trajectory has resembled a perpetual peeling. On reflection, art has been a saving grace for it helps me make sense of the world and my position in it. With every layer is a big ball of issues that are then articulated by my avatars. As consequence, it is a result of expressing and bearing witness to the Rainbow Nation exercise, umzabalazo and the Fees Must Fall era which has had an influence in my life and work.

‘Beloved Country’ will feature a newly commissioned performance. It is an evening length gala intervention and celebration of “a latter day South Africa” led by our new avatar ‘The Versatile Queen Ivy,’ the latest figure in my on-going, ever-growing fictional utopia. The performance will enter from the streets of NYC as a procession and unfold through video, accompanied by a sound collaboration with artists Dope Saint Jude, Angel-Ho and Vuyo Sotashe.

The title alludes to ‘The Rainbow Nation,’ a name bestowed on post-Apartheid South Africa by Arch Bishop Desmond Tutu (used prior by Josephine Baker in reference to her multi-ethnic adopted kids). I feel like celebrating the hopefulness of the post- Aparthied era while also making references to The Wizard of Oz, Enoch Sontonga’s National Anthem, my many identities, and the existing racial tensions that might be ‘sugar-coated’ by ‘rainbowism’ in lieu of true societal transformation. This performance introduces NYC to the next generation of artists coming up in South Africa and will culminate in a show-stopping musical and video revue of influences and key South African cultural and musical movements including the emergence of Kwaito post-1994 Shangaan, Electro, Gqom and the participatory political chants and songs of Umzabalazo (Freedom Songs) from the Apartheid era.

Athi-Patra Ruga, performance of Over the Rainbow as Versatile Queen Ivy for Performa Gala 2016, New York.

You took part in Performa in 2011. How was the work received then, and has this in anyway influenced the conception of Over the Rainbow?

In 2011 our work, titled Ilulwane was included in the programme and took the form of a procession homage for Xhosa boys who never make it back from esuthwini (a rite of passage) or in some cases live to be called Ilulwane – neither Boy nor Man, Bird nor Mouse. The procession is a performance tool that I used for the first time at Performa 11 with a troupe of synchronised swimmers. It is a powerful, democratic performance that without many words, brings to attention what happens when there is a common attention! They subsequently came in other forms. After the synchronised piece we did then, The Future White Women of Azania Saga, expanded on the darker Nationalistic motive of parading a body-national. For Over the Rainbow, it is a procession consisting of a marching band and a choir heralding the ritual presentation of the avatar.

In your video Public Service Announcement (2014), The Versatile Queen Ivy is described as the creator of Azania, a land no longer ruled by Elders, and is the first matriarch in a “non- dynastic line of versatile queens.” It’s interesting, given the character’s history, that you have chosen this moment to bring The Versatile Queen Ivy into physical form for the first time, or were your other avatars variations of the same Queen?

The Versatile Queen Ivy is a nod to transhumanism and to the the influence the drag arts have had on my practice since 2003 when I started creating my avatars. It is a contradiction in terms intended to subvert the heteronormative notion that Queens are strictly passive (if you know what i mean). The avatar is alluded to in PSA, which is a shade-reading of a Nations constitution. In the past year The VQI has been executing the prophecy stated in the PSA in a series of “decimations” that resulted in the conclusion of The Future White Women of Azania at the Bass Museum and in Denmark. As a performer, I am using this avatar to investigate how an autonomous body comes to clash with a sovereign status quo, in Art and in Life.

In an interview with Jessica Hunkin you describe the avatar’s ability to give you strength, drawing comparison to Marvel superheroes, born from traumatic circumstances. Where do you think this strength in the avatar comes from?

It’s like a sketch for one of my large tapestries. My avatars are a result of hours of research, studio time and experiments in public spaces. Then you repeat. This results in the public audience layering their stories onto the performing body. Your body becomes a site for contemplation. The most important ingredients are intuition and personal experience, i.e. trauma. I view costume and the ever expanding pantheon of characters to be about my self-preservation and care; post-trauma . However, it is important that from that moment you cease to be defined, you start defining yourself as a way of manifesting power.

Let’s talk about the element of masquerade in your work. You’ll be performing at a gala, amongst people drinking, eating, and so forth. At what point does the Trojan Horse ‘reveal’ itself, and do you think people are familiar with or aware of the undertones being played out?

From my experience of performing in gala events I have come to the realisation – to my amusement – that the walking, conversing, and dressing up lays a ritualistic framework in which everyone performs. The audience is the beginning of the performance. The Trojan Horse effect then comes into play with the revelation of the avatars and chorus as a disruption of whatever is expected from the co-performers, the audience. 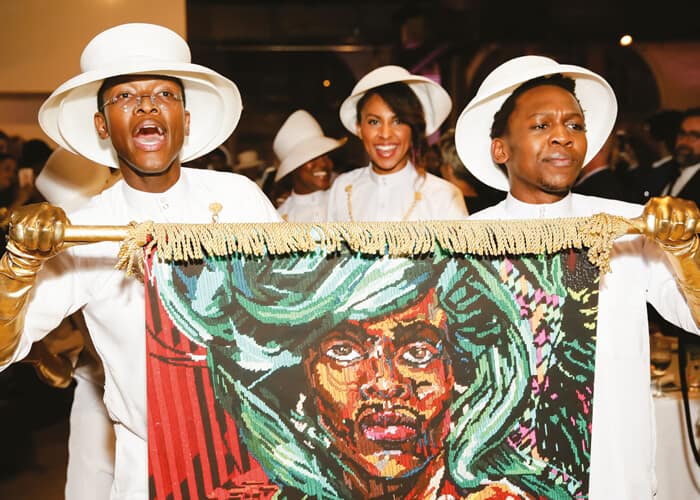 Athi-Patra Ruga, performance of Over the Rainbow as Versatile Queen Ivy for Performa Gala 2016, New York.

Running parallel to the Performa gala is ‘Queens in Exile,’ at the Michigan Theatre. This too is centred around The Versatile Queen Ivy, who will perform imaginary resurrections and conversations with three historical figures. Please tell us more about these figures in relation to your work?

The Versatile Queen Ivy is the narrator of ‘Queens in Exile.’ The title derives from an essay by queer rights pioneer Sylvia Rivera. The second conversation is with Delmas treason trialist Simon Nkoli, another ‘Queen in Exile.’ This is one I have been preparing for physically since 2015 to be the next avatar – to delve into movement and an understanding of the artist within his complicity in the modernist ‘drunk uncle’ primitivism. I am notating dance pieces by Senegalese-French dancer and modernist Feral Benga who made a cross-Atlantic journey heading to New York and was in turn exposed to the American modernist trends that came with the twenties, including that of Afro-philia. Benga was no stranger to the modernist movement. In moving to Paris at seventeen he would join the Folies Bergere , act in a Jean Cocteau film and join Josephine Baker on stage. At times he would present drag parodies of Miss Baker (“tout pour Josephine”). Performing the archive is important as it revises and compares what has changed and what still needs to.


Your work is not limited by any specific medium, rather it is colour, myth, and exhibitionism that appear consistent throughout. Is it important to you to maintain this, or do you see yourself leaning towards a specific mode of expression with time?

One can never tell. As stated this is not just a cathartic process of peeling but also of sometimes adding skills and experiences. I want to give the imagination a chance to delve into subject matter far and weird. This I use in disrupting/queering the archive and counter-proposing new narratives and disruptions. All that is furthered by the two media; performance and petit-point. They require me to constantly encourage myself to be disciplined. Does that suggest mastery? I’m ambivalent about mastery.

The U.S Pavilion presents Loophole of Retreat: Venice this October an extension of ‘Simone Leigh: Sovereignty’

An activist fashion show by The Sistaazhood at the Castle of Good Hope, Cape Town, South Africa