Thomas Sankara descended upon Upper Volta in 1983 as a prodigal son, armed with a bold vision to transform what was at the time the world’s second poorest country into Burkina Faso—“the Land of Upright Men”. It is from this founding prophecy that Pierre-Christophe Gam’s latest body of work draws its name. The series is an immersive reconstruction of Thomas Sankara’s life, death and legacy. Gam employs a luxurious, architectural fusion of digital and material techniques ranging from pixel art to photography that collaborate to teleport us into a multi-dimensional matrix of Sankara’s politic. Martyrs never die, they are only reborn. Gam’s series offers us a rebirth of the revolutionary and undeniably prophetic spirit of Thomas Sankara as an apocryphal narrative in three parts— the Miracles, the Betrayal, and the Resurrection. 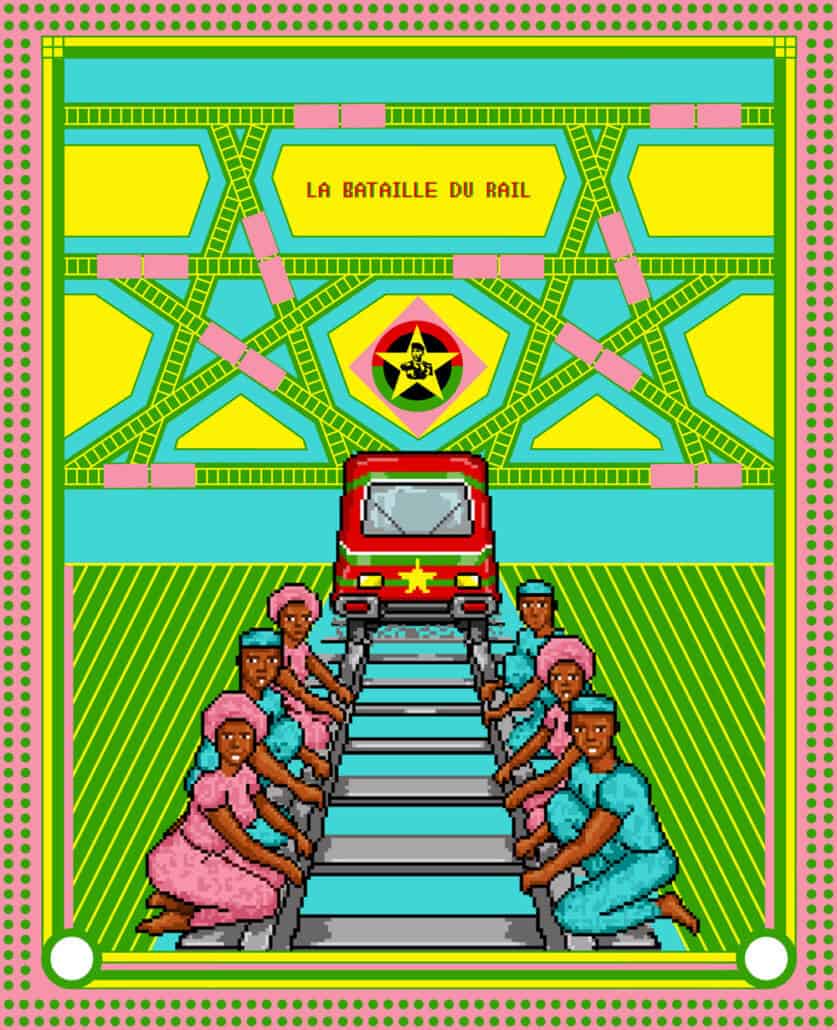 Pierre Christophe Gam, The Battle of the railway, 2017. Digital print on cloth.

The first section of the series, which documents the leader’s bold national agenda of reform, is at once aesthetically playful and complex. Gam, who was born in the same year as Sankara’s ascension to presidency, narrates the Burkinabe revolutionary struggle through the lens of his own youth. He draws on the aesthetics of the Japanese Manga and video games of the time through bright greens, bubblegum pinks, and crisp yellows that imbue the collages with a youthful vibrancy. This vibrancy functions to introduce the work in a manner accessible to all; Thomas Sankara was a man of the people, and this series is one for the same. Atop each collage sits a silhouetted profile of Sankara within a yellow star, encircled by the distinctly pan-Africanist black, red, and green—a detail which gives the otherwise didactic and playful constructions a propagandist overtone.

Gam further aestheticises Sankara’s Marxist pan-Africanism in his synthesis of multiple elements, employing mixed-media to assemble nuanced compositions in which all means of production are actively engaged in the frame. Influenced by both his background as an architect, and time spent in the world of luxury design, the series is pristinely constructed in layers. The pixel-plane forms the foundational layer of Gam’s compositions, with digitally-printed tableaus that depict Burkinabes as pixelated characters enacting pillars of Sankara’s agenda. In this aestheticisation of the commune at work, each pixel is a seed, and each seed is brought to harvest. What is conceptualised in the digitally-printed fabric, becomes materialised through its accompanying collage.

Having immersed us in the Miracles of Sankara’s vision, Gam goes on to introduce us to these other players in the matrix. Both Sankara’s Vice President and his closest comrade, Blaise Compaore was instrumental in orchestrating Sankara’s assassination. Sankara’s betrayal was facilitated by Compaore’s wife—a Creole woman by the name of Chantal Terrasson de Fougères. The granddaughter of a former French colonial governor, Chantal was a member of Burkina Faso’s ‘alienated elite’ whose sustained proximity to power was inherently antithetical to Sankara’s revolutionary praxis. 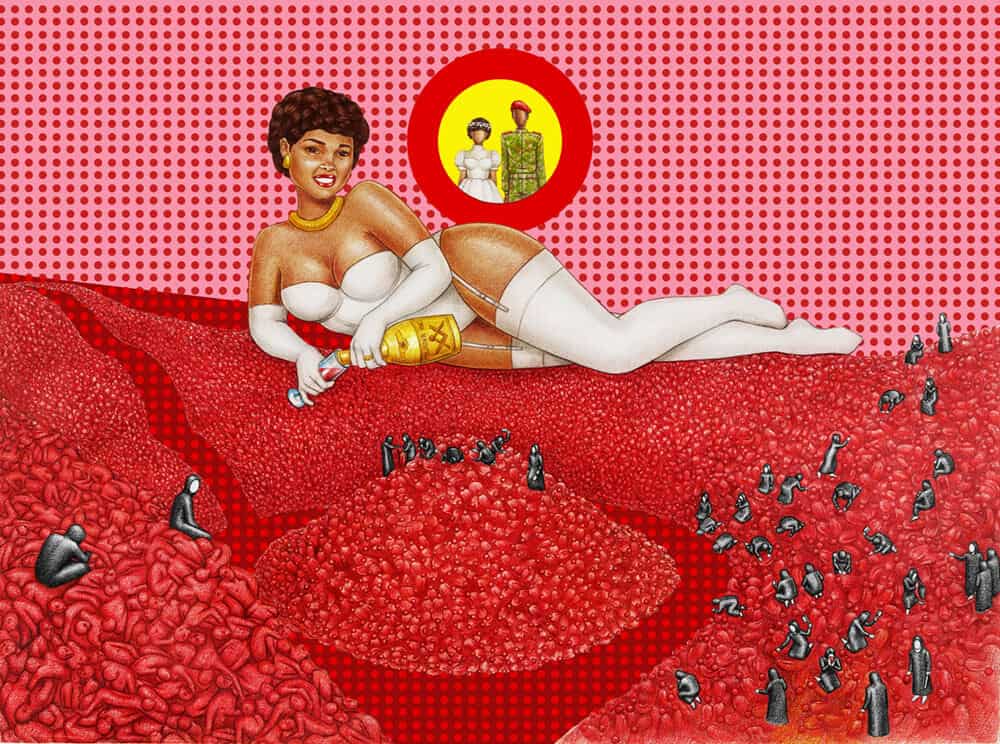 The Temptation sees Chantal laying atop of sketched bloody corpses in a seductive pose, representing the elicit, saccharine, and ultimately fatal temptation she embodied. She is virginal in her dress and sultry in her positioning, all atop ghoulish forms who scavenge through piles of bloodied corpses. Chantal pours champagne from a golden bottle, which emerges red from the spout. The playful tone communicated by bright pinks, greens and yellows that punctuated the first section is made more austere by the introduction of this symbolic red. The perniciousness of the scene is neutralised through Gam’s colour pencil technique, which gives a story-book quality to the otherwise increasingly evil arrangement. 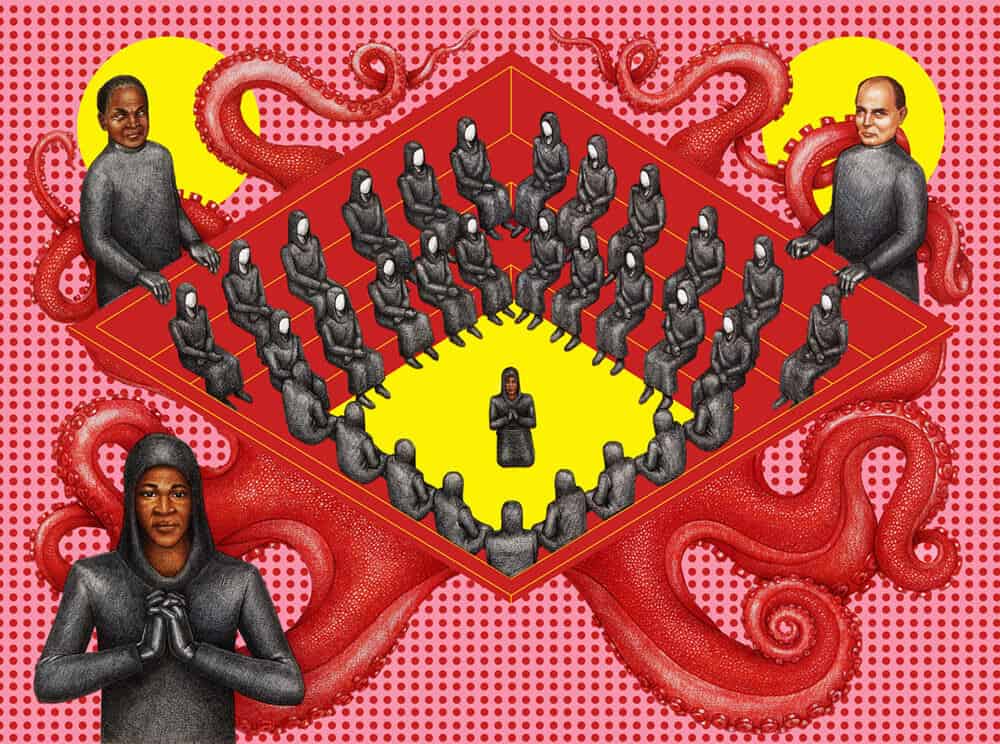 These ghouls gather menacingly in The Pact, beneath the ominous control of puppeteers—French President Francois Mitterand on the right, and Ivory Coast’s Félix Houphouët-Boigny on the left. Coiling tentacles emerge from the ghouls’ cube, wrapping around the Rose Croix puppeteers in a macabre embrace. Compaore is pictured kneeling in the center of the frame, hands interlinked as though if in prayer—be it for mercy, or repentance— as he makes the pact of ultimate Betrayal.  Judas’ pact with the ghouls prefaces the grim climax of Sankara’s martyrdom, depicted in The Murder. Sankara stands, brave and austere, with a glow of youthfulness, at the forefront of a red table lined by his twelve disciples. At either side, he is flanked by six guns, again made playful by their rendering in pink against yellow. The assassins are modeled by real men, shooting at a sketched Sankara—an aesthetic juxtaposition which iterates the abstraction behind the prophet’s murder. In fact, it was not the man they sought to slay, but his spirit. Sankara’s assassination came just four months after his landmark “Speech on the Hill” at the July 1987 African Union forum, in which he called for all African nations to abandon the repayment of their ‘debt’ to colonial powers. It is for this radical expression that Sankara, the prophet, came to his crucifixion. 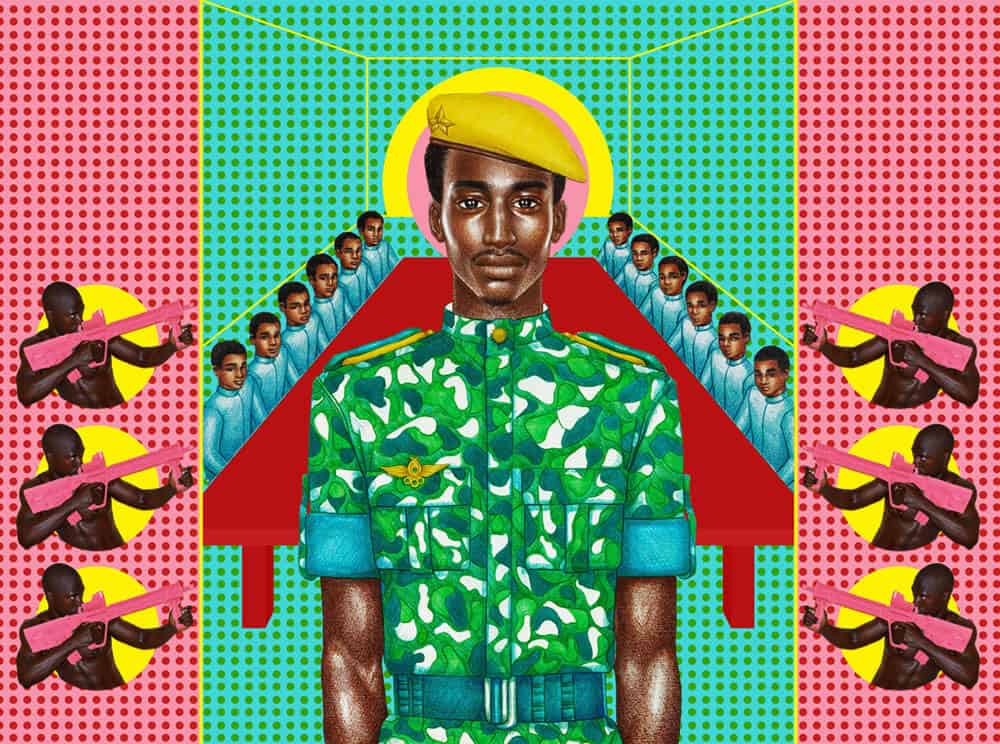 Whereas six gunmen flank Sankara’s figure in The Murder; six feminine angels encircle him in the central frame of triptych “La Patrie”, a divine essence of beauty and resurrection outflowing from their palms. It is the first we see of the martyr post-mortem—limp and vulnerable, draped in the lap of a model representing Mariam Sankara. Their two nude, Black bodies re-cast the Renaissance beauty of Michelangelo’s Pieta; and if Sankara is the prophet who endeavoured to lead Burkina Faso into the Holy Land, then Mariam is the Black Madonna who clutches the fallen prophet in sculptural surrender after his crucifixion. She does not look down at his body in mournful resign; but rather glances straight ahead in powerful address, so as to pulse life back into his body through her strength. She is the embodiment of the divine feminine power and motif of Isis that traces throughout the series. Alas, Sankara comes back to life in “The Resurrection”. He is draped in the fabric of a thousand pixelated women, baskets full on their head—a testament to the abundance that Sankara committed himself to harvesting amongst his people in life. Though Sankara’s flesh body is dead, the manifestation of his vision replicates towards infinity through these countrymen. He is brought to his death by Judas; he is brought back to life by the angels, by his Mary; but he is ultimately kept alive by his people. A seed buried will only go on to bear more fruit.

Yes, “Africa is Now” is a trendy statement. But what does it look like in practice?

“Sankara, The Upright Man” is a traveling presentation that plants seeds of its namesake’s memory with each installation: first in Cape Town, at the Art Africa Fair in March 2017; then at Dak’Art, in Senegal, in May; and now, at the Africa Center in London. Accompanied by a dynamic talks program, film screenings, and panel discussions; this presentation activates Sankara’s legacy as a catalyst for cultural inquiry into Africa’s present reality, with eyes on the past and action towards the future.

The present is the future in motion.

Afropresentism liberates African history and miracle and technological advancement from the realm of the speculative, the alien, the surreal.  It instead locates the presence of these mystical histories in the now. Not as distant potentialities, but as codes interwoven into our present reality.  Afropresentism is as much a praxis as it is an aesthetic.

Gam’s work stretches Sankara’s legacy through time and across media, planting it into the current pulsing moment. Gam does not mythologize a world beyond this one. He creates a world within our own. One built from our own histories, inevitably already situated in the future–our Present.

Afropresentism begs for the future to be shaped by meditations on the past. It begs for the fabric of these histories to be worn proudly, to be built upon critically, to emerge as blueprints for the salvation yet-to-come. The Upright Man is at once an ode and an offering to the martyrs in this project of Enlightenment.