Presented by Salon Ninety One

ART AFRICA conducted various interviews with some of the artist that will be exhibiting at Investec Cape Town Art Fair 2018!

Paul Senyol is a self-taught, South African artist whose time spent working in public spaces led him into the artistic sphere. Senyol’s abstract images marry line, form and colour, and may be attributed as first finding inspiration in his ‘free art’ works, situated on corners around Cape Town. 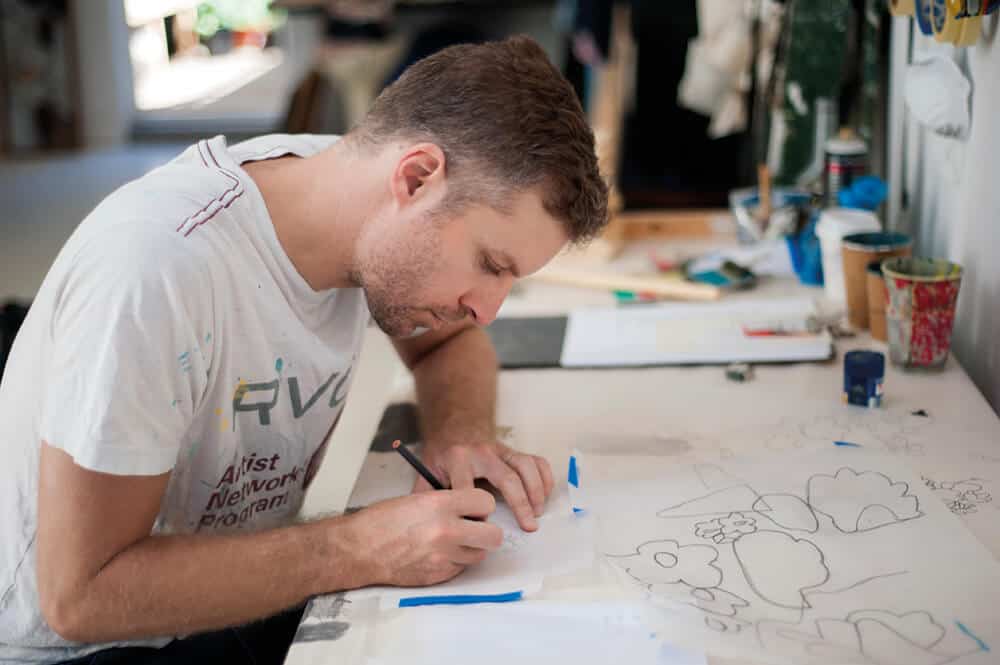 Paul Senyol in studio, 2017. Courtesy of Salon Ninety One.

ART AFRICA: In the early 2000’s you exhibited free art around Cape Town, nowadays you’re involved in the gallery space. How do exhibitions at Art Fairs differ from your experiences of ‘Free art’ and the gallery space?

Paul Senyol: During the early 2000’s, I spent a lot of time working in the public space, as it was something that excited me and was also a great way to show work and engage with a broader audience other than the gallery-goer. I still enjoy painting outdoors, doing murals, and having interactions on the streets, which over the years, as I have matured as an artist, become more conceptual – particularly in terms of their placement and surroundings.

In my mind, there is definitely room for works on the street, works in galleries, and art fairs. I am not so much interested in the title of each, but more interested in the interaction within a space, and so my approach to working within either of those spaces differs only in what is presented as the ‘exhibition’ space. Each one has its place and purpose within the art community.

You have said that skateboarding magazines had a prominent influence in your artistic style and your passion for the arts – as an artist with no formal training, and coming such a long way since your inception, what caused the fundamental shift in your desire to pursue art?

During my mid-teens, I started skateboarding with a bunch of friends in our neighbourhood, and skateboarding changed the way in which we all looked at the spaces and the possibilities within the suburbs for uses other than what they had necessarily been intended for. We would always be on the lookout for new and interesting places to go skate. During these adventures, we were always looking for surfaces and angular objects of all different kinds. I suppose this got me interested in textures, shapes and forms, and then interpreting them in different ways and means.

Within the pages of early skate magazines, I saw many skateboarders who were crossing over and becoming involved in photography, painting, drawing and music. It seemed like they all went hand-in-hand and were an additional expression of skateboarding, which was kind of the root. Everything from the logos, board graphics, to the layouts of the magazines caught my eye, and I would pore over the pages just as much for the skateboarding content, as the design and artistic elements within them.

Popular skateboarders at that time who were showing work in galleries were guys like Ed Templeton and Marc Gonzales – these were my first art teachers in a way. They showed that you didn’t need to have studied art to be creative, but rather that passion was a key ingredient. This led me to begin experimenting with different creative

outlets – the easiest at the time were old cardboard boxes I picked up while skating, I would take them home, cut them up and paint on them. It felt right to me, as we were often skating in derelict areas where there would be a lot of trash, and so I was using things that I found within my environment, and making them beautiful.

At first I didn’t even use brushes – just cheap household paint, wood-glue and my fingers and sticks for scraping and applying paint. Today these surroundings and found objects still play such a big role in my work, and are always finding their way into the process.

Lines, shapes and various hues make up the structuring of your style, could you elaborate on the creative process and how you fit these elements into your artwork? In addition, which artists have influenced you and your work?

I spend a lot of time commuting on my bicycle, and going out with friends on pre-dawn rides around the mountain. There is a tension for me between the built and the natural environment, and this intrigues me. I take mental notes and snapshots when I move through these spaces. When I get back into the studio, I spend a bit of time drawing and sketching out various shapes and forms, and working on basic composition sketches for my works. Once I have a few of these on hand, I translate them onto canvas, and then the painting begins. I usually also work with a couple of painter’s swatches, and mix them as I paint.

Artists that have had an influence on my work would be Barry Mcgee, Cy Twombly, Jean Michel Basquiat, Hurvin Anderson, Peter Doig, Matisse, van Gogh – those are the big names. There are also a bunch of local artists who I keep an eye on such as Matthew Hindley, Michael Taylor, Andrzej Urbanski, Kai Losgott, Andrew Sutherland, Marelise Keith, Dion Cupido, Wesley van Eeden, Ricky-lee Gordon, and John Murray. 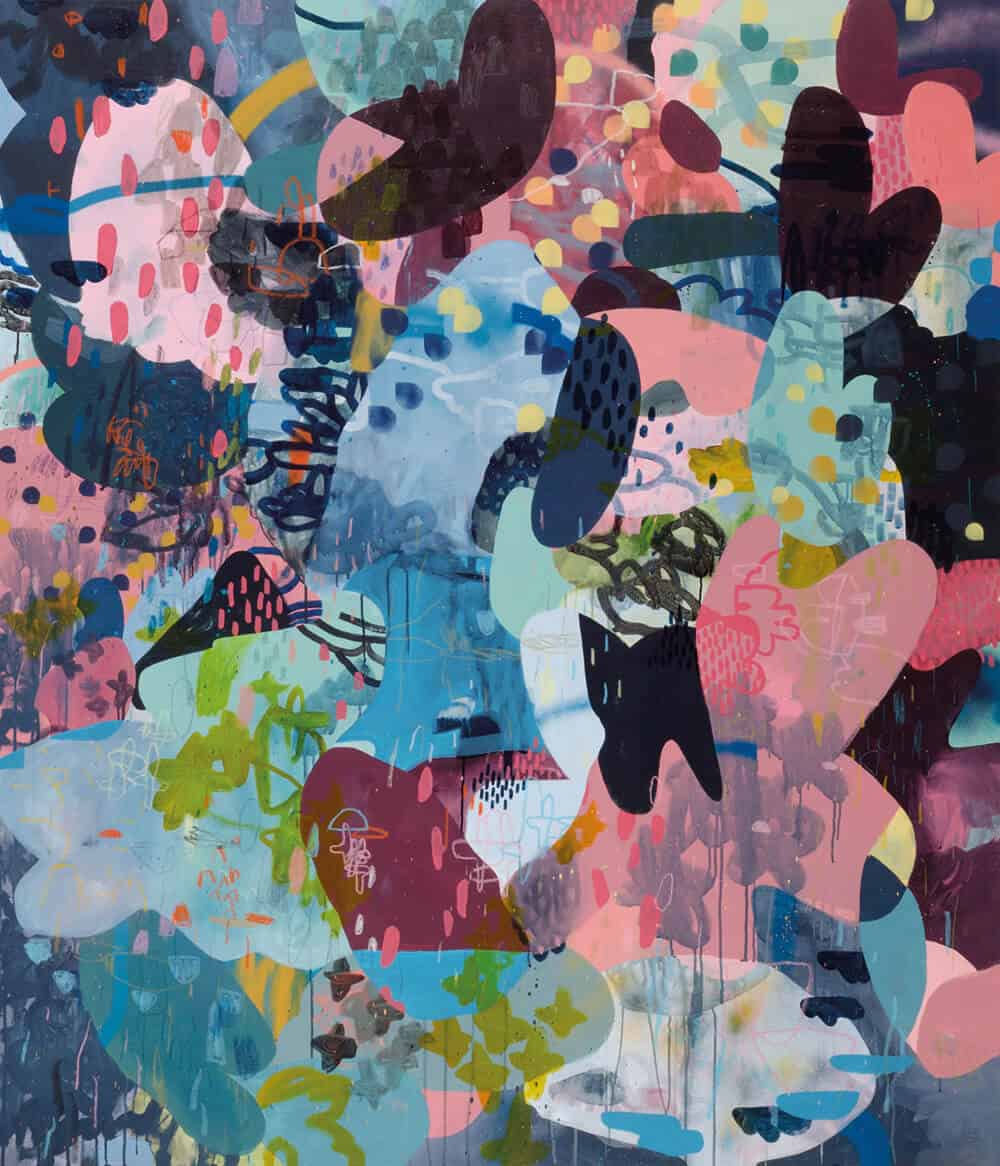 It is known that you are fond of collaboration and connection with your neighbourhood and the youth – how do you interact with this space and what are some of your favourite collaborations you have taken part in, both previously and upcoming?

A couple of years ago, Adidas did a great project here in Woodstock called ‘I Art Woodstock’, and I believe this was the genesis of some really great pieces in the area – including it becoming a bit of a hotspot for works on the street. In 2017, the International Public Art Festival (IPAF) was a great project to be a part of, and I was pleasantly surprised by the warm welcome we received as artists from the Salt River community.

Needless to say, I am looking forward to this year’s festival again, and I hope to have a nice wall to paint. I find that these projects and collaborations bring a refreshing energy to my studio work, as well as getting to know new faces, and making beautiful spaces.

This year marks an important year for both you and Salon91 as it marks a decade of working together. Another big highlight is your work being on show at the Investec Cape Town Art Fair (ICTAF) February 2018 – what can we expect to see from you at this year’s edition?

Indeed, these ten years have flown by, and it has been such a pleasure to work with Monique and the Salon91 team. They have supported and believed in my work and vision over the years, as well as challenged and allowed me the opportunities to experiment and grow as an artist.

Regarding the ICTAF – we have been involved and showed there since its inception. It gets better year-by-year, and is becoming a world-class art fair, which makes it an incredible privilege to be showing at again. The ICTAF always sees me engaging with some fresh new work, usually after a nice holiday time which gives me a bit of time to reflect on new work and techniques.

For 2018, there are a few twists in terms of palette, and the execution thereof, as well as a full wall-to-wall installation piece within the booth which I am quite excited about.