Performances and other activities part of SESC_Videobrasil

Check the program of the opening week of the 20th Contemporary Art Festival Sesc_Videobrasil, from October 3 to October 8.. The official site of the Festival will be launched soon, with the complete program through its closing, on January 14, 2018. 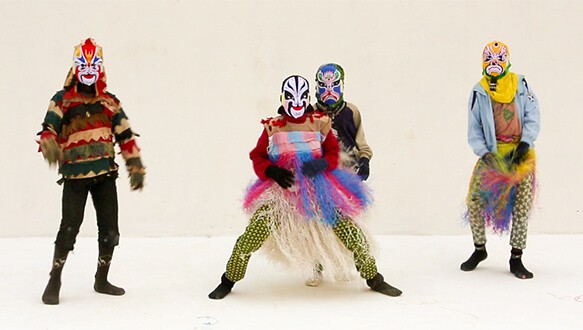 8pm, Sesc Pompeia >> Roy Dib (Lebanon) | Here and There – São Paulo Edition | Performance
In Aleppo, one of the most war-torn cities in Syria, those who have no shelter protect themselves behind curtains and carpets stitched together—if not from the bullets, at least from the sight of snipers. The colorful corridors of cloth walls are a powerful image of the atrocities of war. In the performance, a similar curtain-wall is set up in the Festival space by an actress who sews a patchwork of Eastern fabrics with a tapestry needle while reciting a text.

9:30pm, Sesc Pompeia >> Natasha Mendonca and Suman Sridhar (India) | The Black Mamba | Performance
Pairing up with the Indian singer, songwriter, actress, and performer Suman Sridhar, Mendonca proposes a live act involving video and live music. Sridhar is at home in di erent areas and genres: she has created radio pop hits, performed in art galleries, and staged performances on television. She produced and acted in Mendonca’s Ajeeb Aashiq, a work selected for the Southern Panoramas exhibition. From its very title, The Black Mamba draws on the atmosphere of Bollywood, the Indian popular film industry nicknamed after Hollywood.

3pm, Galpão VB >> Guided tour to the exhibition Agora somos todxs negrxs?
Curated by the artist and activist Daniel Lima, the exhibition addresses the contemporary production of black Brazilian artists. Works by artists such as Ana Lira, Ayrson Heráclito, Jaime Lauriano, Rosana Paulino, and Frente Três de Fevereiro reflect current debates on racism, gender, and feminism, generating a timely convergence of themes running through the Festival’s history. The curator conducts a tour of the exhibition, on display at Galpão VB until December 16.

8:30pm, Sesc Pompeia >> Filipa César (Portugal) and Sana N’Hada (Guinea-Bissau) | LUTA CA CABA INDA | Performance
Titled with a Creole expression that means “the struggle is not over yet,” the action is based on the restoration, research, and dissemination, by Filipa César and Guinea-Bissau filmmakers, of the collection of the country’s National Cinema and Audiovisual Institute, with films produced by the liberation movements of the 1960s and ’70s. In the performance, artist and researcher talk about the contents of the archive, which they consider a “time capsule,” and screen the film The Return of Amilcar Cabral, showing the solemn ceremony of the return to Bissau of the remains of the Marxist politician assassinated by members of his party in 1976. The action ends with a dinner created together with Iada África, a collective formed by African immigrants.

8:30pm, Sesc Pompeia >> Von Calhau! (Portugal) | Tau Tau | Performance
In an environment featuring musical instruments—bass drum, cymbal, bagpipes—and in atable, hanging objects, the artists and a musician put on a scenic-sonorous concert. The “toncert” is based on two motifs, the first Tau and the second Tau. “The first Tau addresses the tautauistic speculative principle which states that the original tone of the universe (the first Tau?) stems from the copy and replication of itself ((the second Tau?)). Thus, it is the tautauistic copy and replication of the Tau that originates the Tau. The second Tau is the attempt to discuss this phenomenon through words, in a concert made up of short songs. The ultimate aim is, therefore, to finish at the end. After the second Tau follows (((at last)) the first Tau.”

3pm, Sesc Pompeia >> Emo de Medeiros (France) | Kaleta/Kaleta | Performance
At the end of the year, Benin’s youth celebrate Kaleta, a festivity with local masks that resembles a mixture of Brazilian Carnival and American Halloween. The tradition is attributed to former slaves who were brought to Brazil and returned to Benin after taking part in the Bahia Muslim slave revolt in Salvador in 1835. Drawing on the festivity elements, the artist creates an immersive environment that invites the audience to con- front their own personas.

5pm, Sesc Pompeia >> Launch of COINCIDÊNCIA – Pro Helvetia Program for South America
The Swiss cultural foundation Pro Helvetia announces the beginning of COINCIDÊNCIA, a triennial cultural exchange program between Switzerland and South American countries. The program’s main work themes, possible formats, and objectives will be introduced at the launch. The new Pro Helvetia | South America Program residency award, offered in partnership with the 20th Contemporary Art Festival Sesc_Videobrasil to an artist based in South America, is already part of this program.

8:30pm, Sesc Pompeia >> Pedro Barateiro (Portugal) | Tristes selvagens | Performance
A text that deconstructs the performance’s title and involves news related to the current historical moment is the basis of the action. While reading the text, the artist screens images, creating a narrative from the news of a pest that a ects palm trees in Portugal and is spreading throughout southern Europe. “Ultimately, do we desire to make the world larger or smaller? Why are palm trees a symbol of desire? Is that why their leaves are being burned? Should we be even more savage or less savage, more or less animal? Who are the barbarians of today? Perhaps the Wall Street stockbrokers, whom Paul Krugman blames for the current economic crisis?” asks the artist in a passage from the text.