The Second Life Of Zombie Monuments 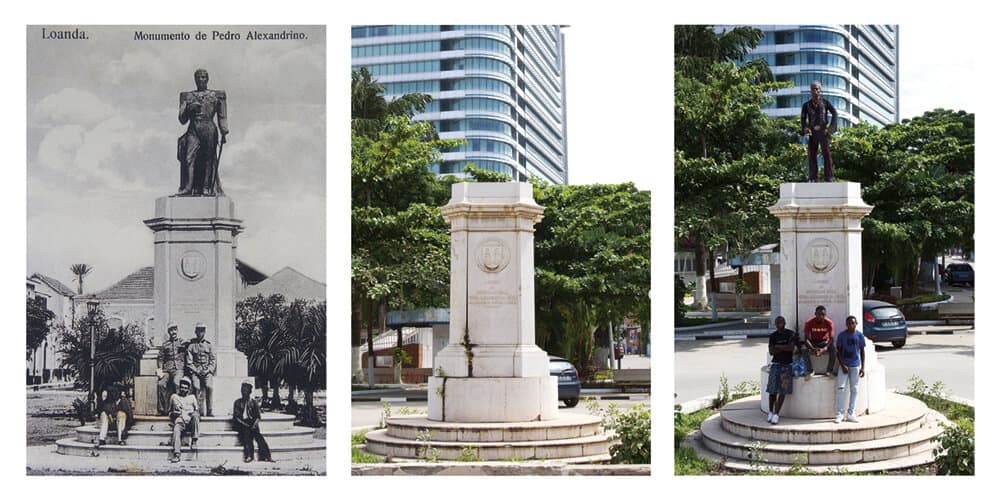 Three men appear on a dim October stage at Cape Town’s Victoria & Alfred Waterfront. Two are seated wearing white boxer shorts and one is lying vacuum-packed in plastic, breathing precariously through an umbilical cord of piped air. The right-hand figure is hooded, his chin cupped in one hand. This pose clearly mimics the ill-fated statue of colonial statesman, Cecil John Rhodes, at the University of Cape Town (UCT) campus, which was wrapped in garbage bags earlier this year by protesting students. It was subsequently spirited away by authorities while its future was debated.

The hooded statue rises, zombie-like, off his chair. He gradually punctures his way through a framed Rhodes University degree certificate, literally reframing himself with its broken form, and disassembles his own seat before exiting stage right. A central figure awards himself a Springbok logo, the well-known emblem for South Africa’s national rugby team. He is stuck, undignified, to a plastic chair that constrains his movements until he too exits stage left in a long and sweaty struggle. Flanked by these two collapsing ideologies, the vacuum-packed figure on the verge of life or death then writhes to centre stage. Following this denouement of Gavin Krastin’s performance, Trophy, audience members take their cue to depart – unsure about the fate of the plastic cocoon or their own responsibility towards it.

That audience is small: in real time, the Springboks are playing Scotland in the World Cup as nations compete for sporting glory. Simultaneously, Europe and Africa are embroiled in a deep migrancy crisis, reminding Global North and South alike that they belong to one world. “Many need to come here precisely because we insisted on going there,” is how UK columnist Gary Younge puts it. Younge also points out that countries bearing the heaviest challenges with refugees are poor, developing world nations, relative to their wealthier western counterparts.

Statistics from the United Nations (UN) bear this out: Sub-Saharan Africa hosted 3.7 million refugees (26% of refugees globally) at the end of 2014 – originating mostly from Somalia, Sudan, South Sudan, DRC, CAR and Eritrea. This compared to 3.1 million in Europe (22% globally) – mostly from Syria, Ukraine and Iraq. The world is facing unprecedented global displacement, according to the same report.

In addition, it is rapidly urbanising. By 2050, the UN expects two-thirds will live in cities, and in many developing countries over half in city slums. In 2016, the UN will host Habitat III, a global conversation on cities that occurs every twenty years. The issue of equity is on the agenda – including ways to extend opportunities and access within the public sphere, and to increase the commons. This conversation is already burning across South Africa; its tinder comprises the unlikely triad of a man in a pink helmet, a portable toilet and public art.

An assembled archipelago of time-travel follows in order to thread together how this happened, and suggest its deeper significance in performing the present.

April 2015: A student wearing a bright pink construction worker’s helmet threw the contents of a portable toilet canister over the statue of Cecil John Rhodes at UCT, to protest “white arrogance” with human faeces. Chumani Maxwele set off a series of further interventions on the statue itself and student meetings at its feet, which in turn spurred action against other so-called ‘dead’ monuments at campuses and public sites across the country. Within this ripple effect, a Twitter hashtag that became a social movement, #RhodesMustFall, created a digital second life. Maxwele’s performative act erupted into a national call for structural transformation, not only regarding universities but also society at large to recalibrate the public sphere twenty-one years into democracy.

Maxwele’s actions have a political context. According to social justice movements in the Western Cape, inadequate sanitation constitutes infrastructural violence, and similar tactics have been used as a way to literally raise a stink by linking public space to public health. The statue was subsequently crated and temporarily banished, but its second life has continued apace in ways beyond the physicality of the artwork itself, allowing meaning to be renegotiated in the performative present.

Seen through a more ephemeral lens, ‘zombie’ monuments demonstrate a mobile dimension of spectral meaning that supercedes their materiality. As such, they can become a site both of resistance and a vector of radical re-imagination. Curator Gabi Ngcobo told ‘Remaking Place,’ a recent public art conference, that strategies of re-enactments are strategies of confronting ghosts or phantoms, “a paradoxical hurt one chases after in order to chase away.”

September 2015: A different statue of Rhodes at a memorial site in Cape Town had its nose angle-grinded off overnight. “The Master’s nose betrays him” and “Your dreams of empire will die” read accompanying graffiti. This act of rage recalls the words of William Mitchell, who writes that public art has also served as a kind of monumentalising of violence.

October 2015: Protestors picketed the UCT public lecture by Thomas Piketty, the French economist, due to speak about inequality. They bore white crosses, a reminder of the Marikana tragedy when thirty-four protesting miners were killed, and an event that Piketty references in his most recent work. His well-known formulation, crudely summarised, holds that return on capital is greater than economic growth – put simply, how the rich get richer.

The audience did not hear Piketty speak, however. His passport was short on required free pages and technology failed to provide a substitute. The protestors nonetheless disrupted proceedings, saying the people who should be in the hall were outside sweeping trash. “We demand that insourcing become a principled commitment of a decolonised African public university,” read their flier. Piketty made it to Johannesburg a few days later. He said that real equality needs a decent wage, high-quality education, access to property, as well as economic and political democracy. “If these challenges are addressed differently, South Africa and Africa are the future of the world,” he added.

October 2015: A series of geometric markings are daubed on the facade of the vacant UCT Rhodes plinth, still crated up and painted blue-grey. They are the bland replacements for a far more compelling series of earlier interventions – ranging from colourful hashtags to a poem by David Diop, The Time of the Martyr, and a pasted cartoon about white privilege. The only visual commentary that remains is a graffiti shadow, pensively seated chin in hand. The empty plinth signals the politics and poetics of the void. It makes evident what is missing in the public sphere, and visually marks an open challenge: what do we do with the unfinished business of the past? 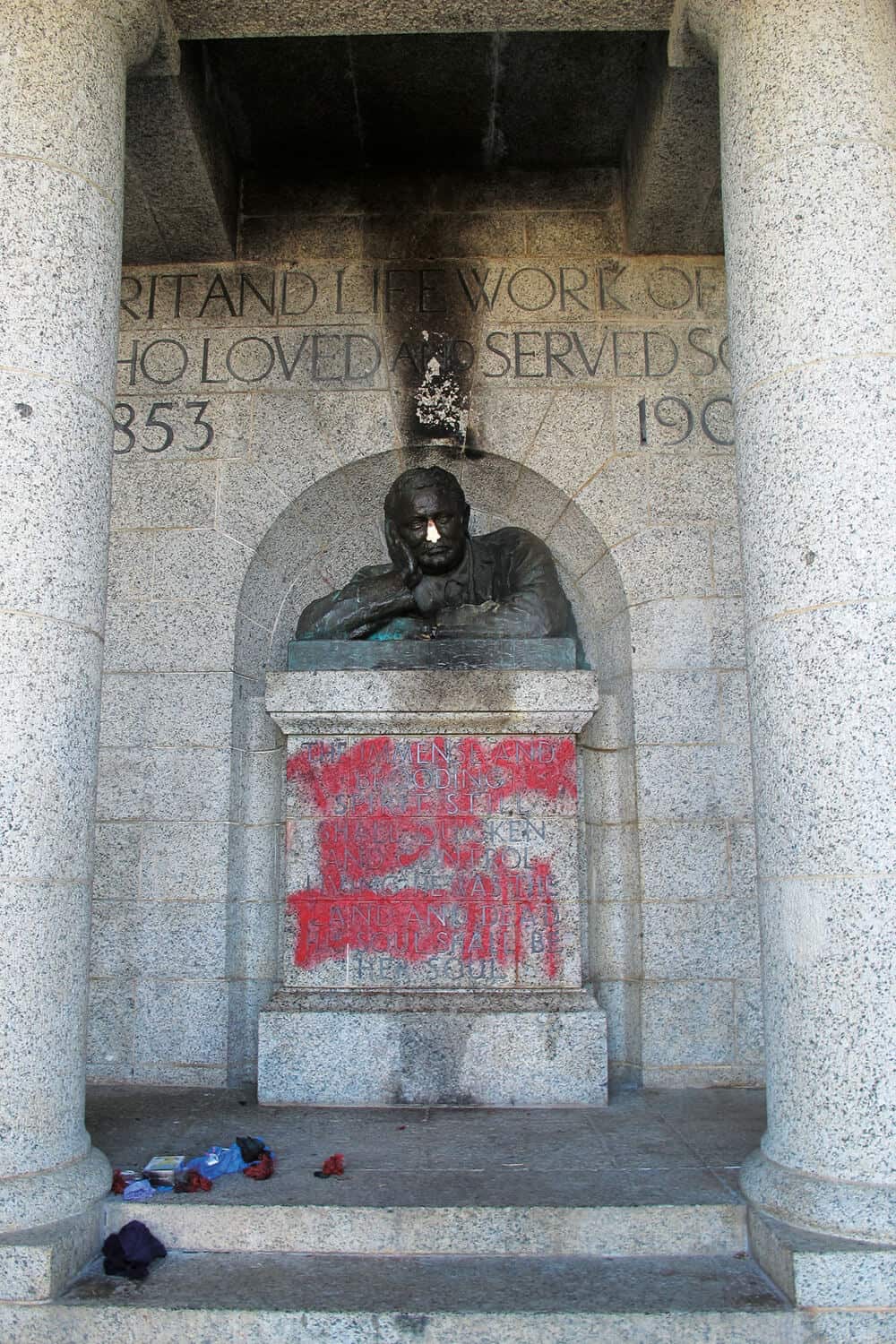 This question confronts all postcolonial societies and public art offers a barometer. The United States is, for example, debating the symbolic legacy of Confederate leaders and post-war segregationists in public space. According to The Economist’s take on this issue, the guiding principle in these stand-offs should be that, when public land and resources are used in a way that causes widespread offence, the authorities should have a good reason for doing so, or else refrain.

Some approaches to this general conundrum are reconciliatory and make, for instance, gardens of remembrance to recall the past, not venerate it. Others reanimate the void instead; artist Kiluanji Kia Henda stands, in Redefining the Power III, upon a now empty plinth in Luanda to re-imagine it in a new vernacular. South Africa has tried a kind of ‘third space,’ as evoked by post-colonial theorist Homi Bhabha, that transcends duality by letting the old sit alongside the new. This idea of third space underlies a broader notion, more common in the Global South, of public space as common space that belongs to nobody and to everybody, where competing claims must be constantly renegotiated and these daily recalibration performed anew. It is a more fluid and hybrid notion, an elasticity of definition that acknowledges precarity and concrete legacies. Guy Tillim’s 2008 photographic series, Avenue Patrice Lumumba for instance, depicts colonial and postcolonial architecture in several African countries in a dynamic relationship within transitional and hybrid scenes that he calls “floating worlds.”

In late October, a pink helmet reappeared during a week of nationwide student protests. This time it was worn by a woman outside a Cape Town police station, calling for fellow detained protestors to be released. The detainees included Maxwele, the Rhodes provocateur with the portable toilet canister. Students joined forces with workers to collectively object to fee increases and call for an end to outsourcing. As with the earlier statue intervention, they mobilised under a collective banner: #FeesMustFall. But, more deeply, it was about the systemic work required to recalibrate the public sphere, the reappearance of the white Marikana cross its visual symbol. The ensuing political conflagration put more equitable living conditions firmly in the spotlight, epitomised by a parallel protest in a Khayelitsha township supermarket: #BreadPricesMustFall. 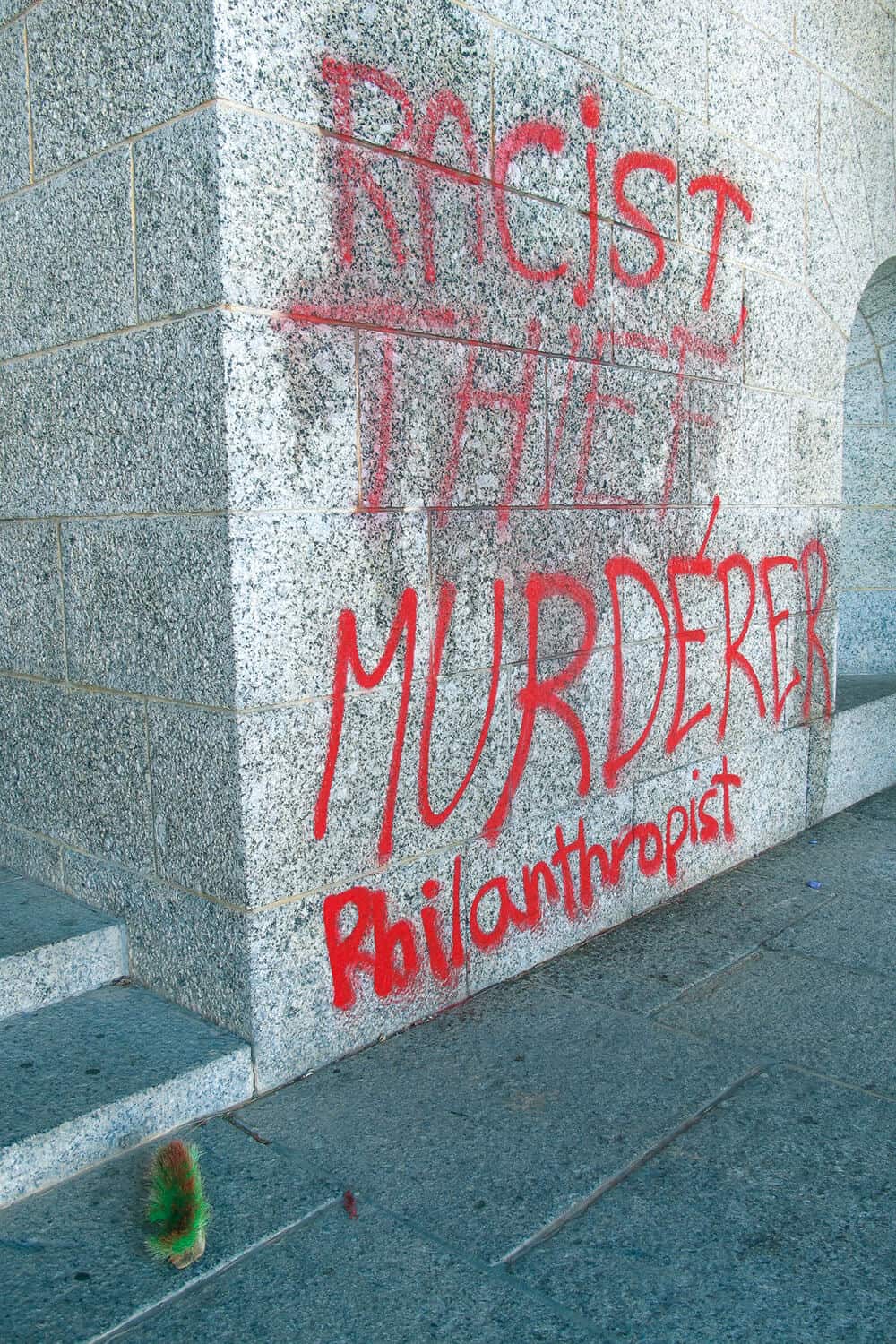 A participant in the back row of ‘Remaking Place’ (the symposium on public art held in March 2015) offered a closing anecdote about everyday racial prejudice and asked attendees: “How can art make this sort of thing visible?” The meaning of the zombie monument does not lie definitively in its concrete form and the magical thinking behind its physical disappearance but rather in the floating worlds of a second performative life – bagged, tagged, silhouetted and transfigured into a vacuum-packed amoeba drawing uncertain breath.

Kim Gurney is a visual artist, freelance journalist and researcher based in Cape Town. She is the author of The Art of Public Space: Curating and Re-imagining the Ephemeral City (2015).