Bradley McCallum is a Brooklyn-based artist whose practice has long been politically and socially-engaged. The international tour of his ‘Weights and Measures’ series, which addresses questions of social justice through the lens of the International Criminal Court, will launch at Constitutional Hill in Johannesburg in February 2017. A selection of his ‘reversal’ paintings from this series – large-scale portraits of criminal defendants rendered in a grisaille, almost solarised palette – was also on view at ‘Still (the) Barbarians,’ at the 2016 EVA Biennial in Limerick, Ireland, curated by Koyo Kouoh. Depicting gures as diverse as Congolese militia leader German Katanga and South African jurist Navi Pillay, the series navigates the humanity of the justice system from the perspective of defendants, justice advocates and victims. Allison K. Young spoke with McCallum about the ‘Weights and Measures’ series and its forthcoming debut in South Africa. 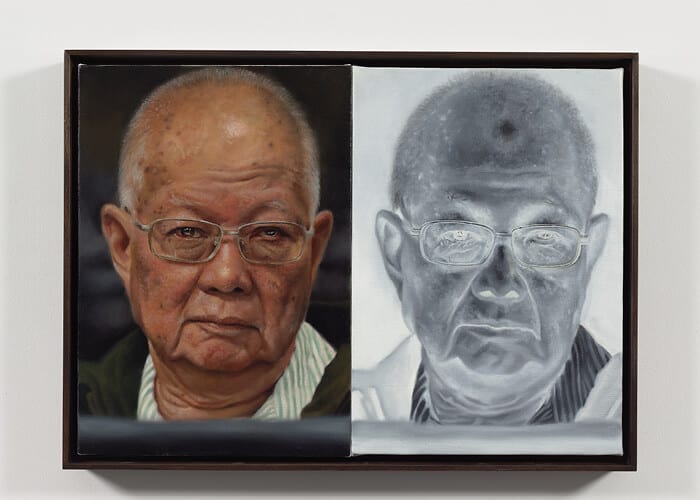 Allison K. Young: How have you cultivated your artistic practice alongside your interests in social justice and activism?

Bradley McCallum: For me, they are one and the same. I am interested in creating artwork that makes a difference; that draws viewers into an experience and allows them to reflect deeply on social issues. I have been making social and politically-engaged work for over twenty years and much of this work has addressed social justice in America. ‘Weights and Measures’ is my first project to go beyond the U.S. to examine international justice. For this project, I have created large-scale oil paintings of defendants, photographs of justice practitioners and audio installations of witnesses and victims, to challenge us to think critically about the legacy of international tribunals, the issues facing the International Criminal Court (ICC) and the voices of victims in seeking justice.

The ‘Weights and Measures’ series was initiated during your residency with the Coalition for the International Criminal Court (CICC). How did this juridical setting inform your artistic process?

In 2012, I attended the Assembly of State Parties’ 10th annual meeting as a special guest and was inspired by the international scale of the court. Thomas Lubanga was, at that point, the only person to receive a guilty verdict and I was moved to make his portrait after returning home. This painting haunted my studio for nine months and in early 2014, I reached out to the Coalition.

My residency with the CICC (2014-2015) developed as part of my creative process. The Coalition’s convener, Bill Pace, allowed me to join their team as an embedded artist-in-residence wherein I had access to their legal staff, their meetings at the ICC in The Hague and their network of civil society organisations working on social justice issues. This foundational research enriched my project and provided me with a more informed and critical perspective. 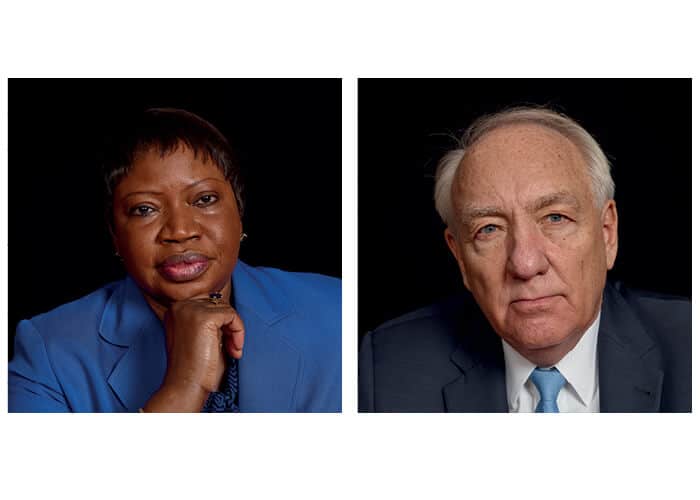 The courtroom photographs that you work from carry strong associations with evidence and the ‘truth value’ of photography. Do these connotations factor in your own translation of the images?

Yes, it is incredibly important that the source photographs are taken within the courtroom and that the paintings memorialise the defendants’ accountability and the end of their impunity. The series of paintings is not about guilt or innocence, but about the frameworks of justice and the isolation of the defendant in this process. Because they are no longer photographs, the paintings also subvert the conventions and traditional values attached to courtroom photography.

The more time I’ve spent looking at your paintings, the more emotionally complex each subject seems to become. I can discern traces of fear, stubbornness, vulnerability and even anxiety in the eyes of each defendant. The portraits may even generate a sense of empathy for them. What are the implications of such humanising portrayals?

Your question gets to the heart of this project and the complexity of these paintings. What struck me in researching each defendant is that many are college-educated men, often from the very best international universities, who became corrupted by their own power.

Part of what you feel is directly related to how I painted the portraits; a subtle manipulation of the image intentionally draws the viewer to the eyes of the defendants. It is especially true with the hyper real colour portraits and underscores the importance of the ‘reversals’ because they balance this humanising experience with an emotional coolness and criticality. The diptychs give the viewer an opportunity to be close to the defendants and to bring the full arch of associations and questions forward in a way that is unique to painting. 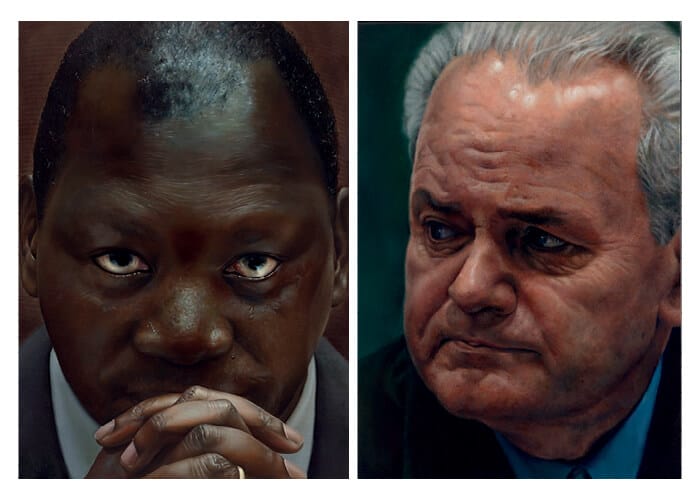 How does the spectrum of outcomes – from impunity to culpability – factor in the forging of meaning for the series as a whole?

Why did you choose to launch ‘Weights and Measures’ at the Constitutional Hill? Can you describe the arc of the tour?

The exhibition asks whether portraiture can effectively open a space to discuss the underlying issues central to genocide, atrocity crimes and human rights abuses. Constitutional Hill is a multi-faceted site: a former prison, a cultural museum and home to South Africa’s highest court. Showing the work in this context acknowledges the important precedent that South Africa’s post-apartheid Constitutional Court sets while bringing attention to the current debate the nation is having about their evolving role in the International Criminal Court.

The exhibition will evolve as the work moves from one site to the next. The full arc of the tour will include installations in Uganda, the Democratic Republic of Congo and Kenya, before culminating in an exhibition in The Hague in late 2017. At each venue there will be opportunities to record the oral histories of witnesses and victims and to photograph justice practitioners. 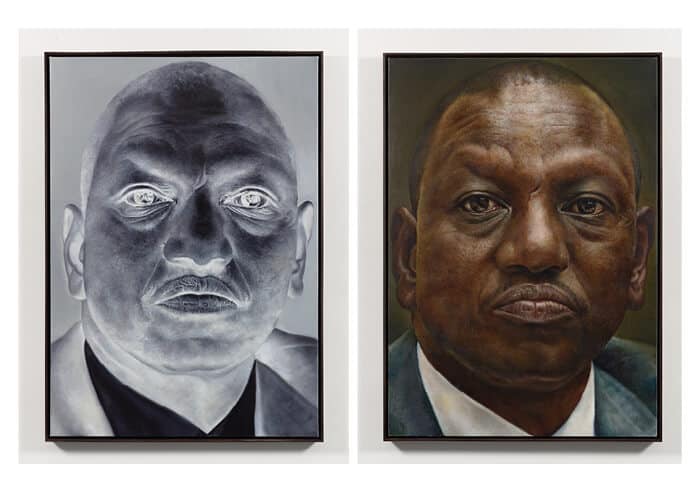 Do you think that ‘Weights and Measures’ might enter into dialogue with the local history of the Truth and Reconciliation Commission (TRC) in South Africa?

Yes, I hope so. The audio testimonial portraits, when paired with the photographs of the justice practitioners, will speak back to the defendants in the paintings and suspend the viewer within the space of the dialogue. I am also currently developing the audio portraits of witnesses and victims and I am interested in the ways that the power of their voices can bring justice. In this regard, the association with the TRC will be clear, even in testimony from other parts of the world. I look forward to seeing how each set of portraits – those of defendants, justice practitioners, and victims – are experienced in relation to each other.

How do you hope to engage with local audiences who may have been affected by the actions of the portrayed defendants? How do you navigate your role as an outsider to these sites?

At each site, the witnesses and survivors of atrocities will be able to contribute their voices to the project. In my practice, having the distance of being ‘other’ can be an important asset, especially when looking at the legacy of traumatic situations. This position also shapes my role, responsibility and ethics because it underscores the importance of leading with questions, of listening and honoring the contributions of the people I collaborate with. It is my hope that ‘Weights and Measures’ will bring people together to wrestle with questions about pain, atrocity, loss and the ability of art to create a forum to explore human rights stories and social justice issues.

‘Weights and Measures’ will be on view at Constitutional Hill in Johannesburg from 2 February – 31 March 2017, before touring to the Democratic Republic of the Congo, Uganda and Kenya (venues currently in development). The exhibition will culminate in The Hague from 23 October – 13 November 2017.