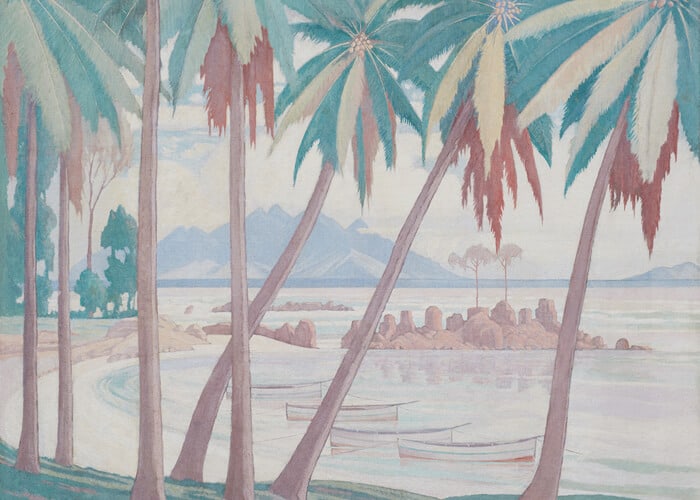 Accompanying this rare painting are two black and white photographs, one of the original owner with the artist celebrating a succesful fishing trip on the shores of Fisherman’s Cove and another of the view across the bay depicted in the painting.

According to Eunice Basson, a former senior lecturer in Art History, “In this painting, compositional elements such as Pierneef’s well-known monumentally stacked cloud formations and the so-called ‘Pierneef trees’, made way for the striking presence of cocoa nut palms along the beachfront in the foreground. Here, Pierneef applied his superb creative skills by utilising the dramatic diagonals of the palms to divide the composition into a distinct fore- and background, creating exquisite smaller cameos and drawing the eye directly into the exotic scenery of the background, beyond the boats on the shore to a smaller distant island and, beyond that, retreating into the haze on the horizon. The subtle trees, clouds and mountainous horizon in the background form a backdrop for this visually striking island scene.”

During the 1950s, at the very pinnacle of his career, Pierneef was acknowledged, amongst others, with two honorary doctorate degrees from the universities of Natal and Pretoria; two major retrospective exhibitions in Johannesburg and Potchefstroom; as well as further exhibitions which were to follow in Pietermaritzburg, Cape Town and Pretoria.

Exhausted, Pierneef and his wife left in August 1954 for a four-month stay in the Seychelles where they spent quality time with close friends, relaxing and fishing, and where he could paint at will. Unlike the subdued palette of his more familiar wintery South African bushveld scenes, he was introduced here to a variety of new compositional features plus the intensity of the ‘tropical greens’ of the vegetation. Pierneef experienced the vastly diverse verdant scenery of the island as intellectually and creatively challenging. He routinely went for long walks, discovering paintable scenes along the way.

At the request of one of the friends who spent time on the island with Pierneef, the artist painted this exact scene as depicted in the black and white photograph. Back home, Pierneef completed the painting in 1955.”