The 77-year-old artist spoke to ART AFRICA in an all-encompassing conversation that touched on his origins as an artist, his favourite materials and the state of contemporary art in South Africa today 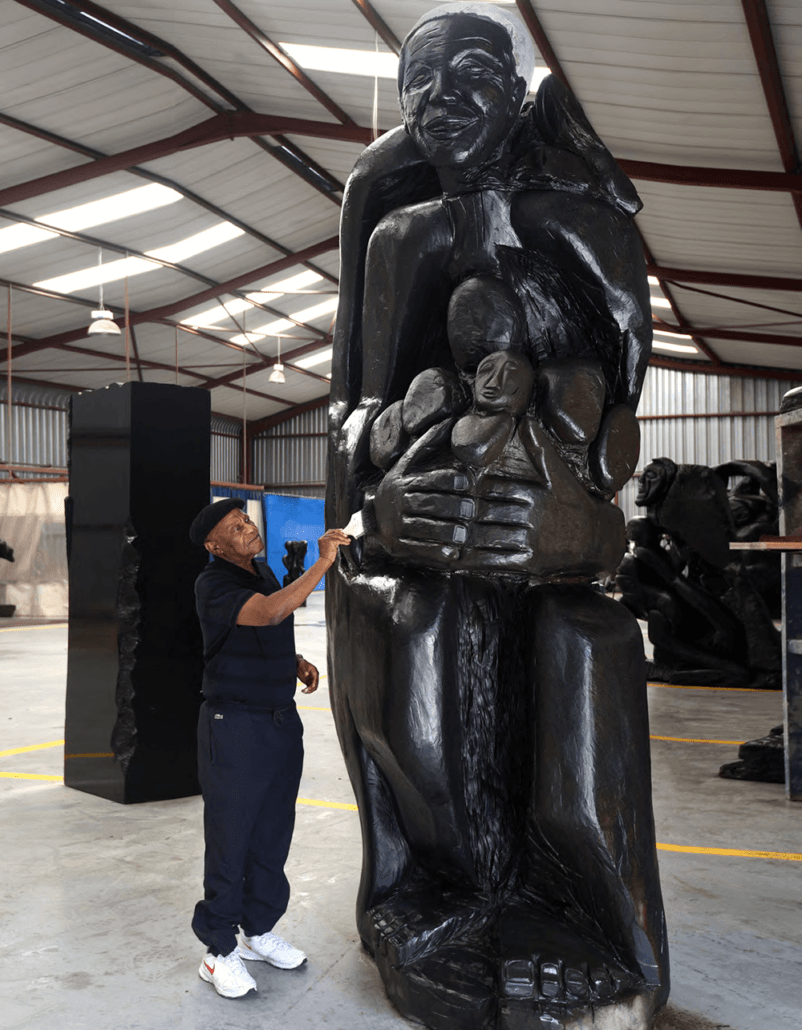 Pitika Ntuli with one of his monumental sculptures, Madiba and the Rainbow Children, 2016. Carved out of wood. Photographer: Refilwe Modise

“I started as a traditional healer, and that led me to art,” says the sculptor, poet and academic, Pitika Ntuli. He remembers being initiated by his uncle, who asked him to sit before a dead tree until it spoke to him. The tree remained silent until the young Ntuli started to imagine how it would look if it were a human being, “I saw the branches and shouted ‘Viva,’ then my uncle said, ‘it looks like the tree has spoken to you.’” In his meditative state, Ntuli saw figures in the wood – a long time before he became a sculptor. Later, when he was already in exile, he took a hammer and chisel and started to carve a dead piece of wood and brought forth the person his uncle wanted him to see. According to the artist, his healing, spirituality and sculpture all emanate from this moment.

Sculpture is a fusion of the artist’s poetry, spirituality and individual expression. David Koloane once wrote, “Although there have been great African sculptors before Pitika, he differs significantly from them all, both because of the broad range of materials he uses and because of his extraordinary ability to be true to each material he chooses to work in.” Beyond the wood, Pitika Ntuli works across a range of materials such as bone, granite, metal and found objects, “ I choose my material depending on what I’m feeling at a particular time and what I want to do,” says Ntuli. He turns to the bone when he wants to evoke a particular spiritual feeling, and he finds that found objects are laden with symbols and takes great pleasure in helping these everyday objects to attain their ideal by freeing them from menial use, “By subjecting an object and using it for what it is not meant to be used stretches people’s imagination,” he says. 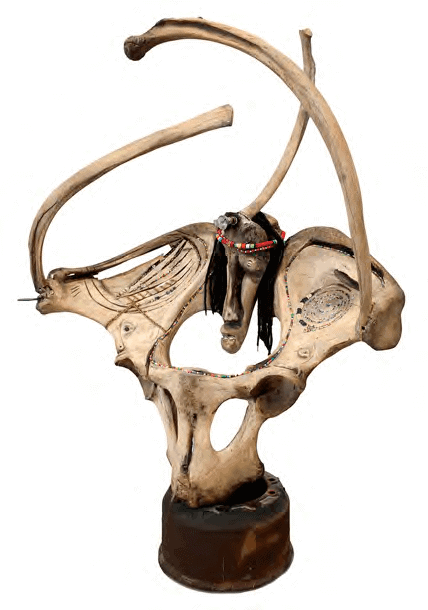 Sculpture made out of bone with beadwork. Courtesy of the artist & Melrose Gallery.

His sculpture, Quantum People, a monumental work that weighs 19 tonnes and took more than four years to complete is fashioned out of granite, a choice that is inspired by the ongoing debate around the land in the country, “these stones are a part of the soil of our land, as we are a part of the land. Using them to bring about social cohesion in South Africa and create an inclusive sculptural monument is important to me.” Quantum People was unveiled at Melrose Arch along with a series of five sculptures entitled History Written in Stone, which records moments in the history of apartheid and our resistance against the system. Ntuli who spent 32 years in political exile started his work in response to the dictatorial regime of the time, beginning with poetry, as a way of covertly communicating with the world via subtle imagery, before moving onto the sculpture. “Both of these use deeper images that carry symbolism,” says Ntuli. “My poetry is layered and can be interpreted in many ways, which is what I did in my old sculptures, too. The poetic elements in sculpture are particularly important to me.”

Ntuli also draws inspiration from the impressive collection of art he’s procured, with his wife Antoinette, over the years, saying, “when you look at somebody else’s work you enter into the personality and soul of that person. When I get my new material, I think of the art that I’ve collected and try to find something that I want to do.” However, the artist holds a dim view of the state of contemporary art in South Africa today, saying “You go into an art gallery and see a lot of laziness – work that doesn’t seem to express anything spiritual, political or social,” he furthered this by adding, “when you see art as it happens in South Africa, it is kind of shallow and just an idea to shock rather than to leave traces of meaning that people can take with them.” 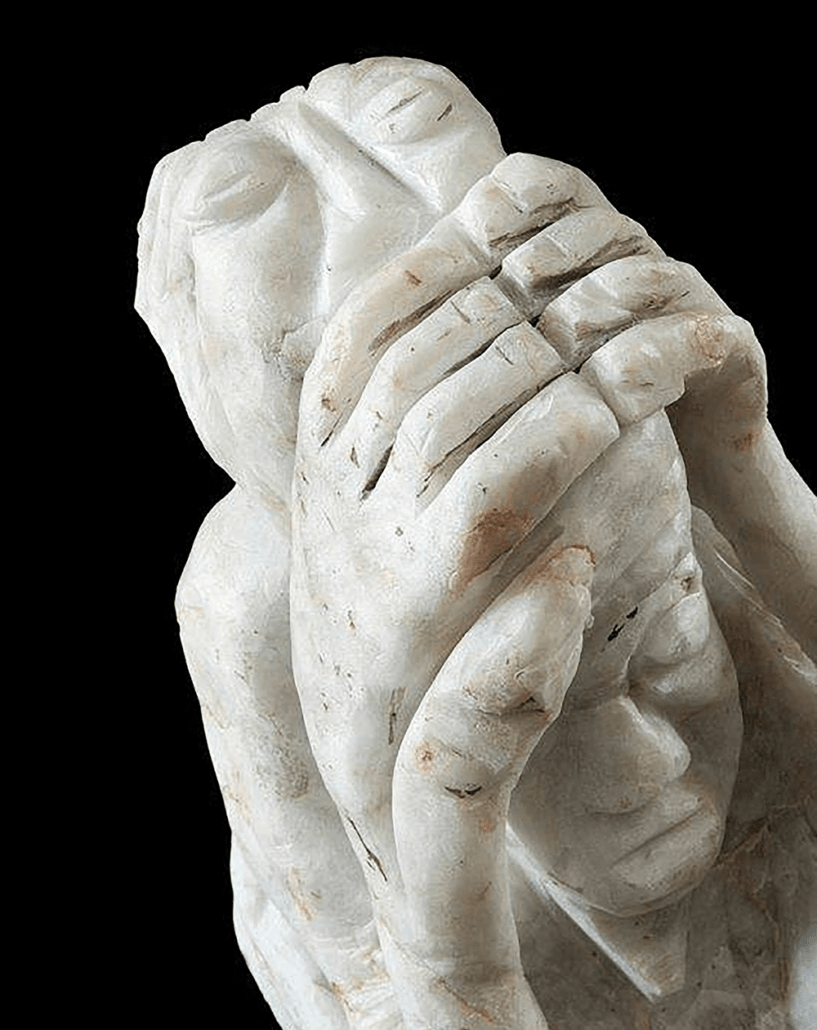 After a storied academic career in the UK, where he lectured at institutions such as the Camberwell College of Art and Central Saint Martins, and was instrumental in establishing art movements such as Apples & Snakes – one of Europe’s leading poetry circuits – and Jenako Arts – a multidisciplinary arts centre, which has since been dissolved – Pitika Ntuli returned to South Africa after the end of apartheid. His first solo exhibition in the country, ‘Scent of Invisible Footprints’, took place in 2010, more than a decade after his return, at MuseuMAfricA in Johannesburg, “I needed to make an impact, not only in South Africa but also to myself, to take stock of who I am, where I’ve been, what I’ve achieved and what I still dreamed I could,” says the artist, in explaining why it took such a long time for the first exhibition comprised of around 100 sculptures to come to fruition.

Pitika Ntuli believes in the omnipotence of art, as evidenced by his work, for him sculpture does not exist without poetry, without music, without painting; it is a celebration of movement, colour, shape and form, saying, “I believe that art is about the interconnectedness, the interrelationship and the interdependency of each and everything.” The impact has been made, and the polymathic artist has carved out a place for himself as one of the greatest South African sculptors of all time.

Storm Simpson is a writer based in Cape Town, South Africa.