With a solo show forthcoming at EBONY in Cape Town, ART AFRICA sat down with the UK-born, South Africa- based artist, Oliver Barnett. In this interview, the artist re-evaluates the line between science and mysticism, discusses his ‘psycho-technical’ experiments, the perks of self-training and developing a sensibility for magic. 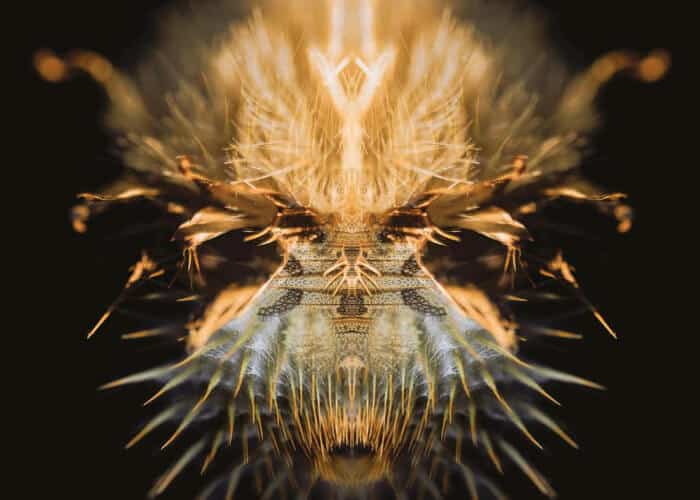 ART AFRICA: In your artist’s statement you say, “Plants know how to make food and medicine from light and water, and then they give it away. They teach us by example. Whether or not we choose to pay attention to the lesson is entirely up to us.” Would you say your role as an artist is helping people pay attention and how do you think your thematic approach extends beyond the environment?

Oliver Barnett: Among all the benefits and pleasure it offers us, I believe the primary role of art, music and creativity is to launch the viewer or listener into realms beyond the reach of the analytical mind that dominates much of our daily existence. Whether people pay attention is really dependent on whether they are looking for this type of experience. It seems very clear that more than ever before, people are looking to reconnect with the sacred and magical aspects of being alive. The intention behind putting creative work out into the world is for it to reach the eyes and ears of those for whom it may hold value.

I consider myself part of a rapidly expanding human collective engaging their skills and gifts to sow seeds of ecological regeneration. Our interaction as part of the ecosystem and the environment is a social theme. We are realising that the world is not just a backdrop for our human projects and ideas to unfold. Generally speaking, when I look at modern society I see an attitude towards the earth that seems to ignore basic ecological rules or environmental principles. It comes from a kind of alienation from the self, and from nature; alienation from the basic elements that house our being in this dimension. From many angles it may be too late to salvage much of the ecological situation but I see incredibly positive stories that point towards a more environmentally integrated life. The sentiments in my artist’s statement reflect a very real need to become more humble, to acknowledge that we are part of a great mystery and despite all our great intellect and technology, we don’t actually know how this story will develop; after all we are relative newcomers to this planet’s narrative.

The works in the ‘Polymorphic’ series have a very specific aesthetic. What is the symbolism inherent in the work and how would you describe your technique?

Symbols are a universal by-product of the evolution of human culture. I believe these are compounds of the brain’s response to symmetry and geometric forms, coupled with a strong connection to nature and its elements. This becomes especially evident during activities such as meditation, dream and trance states and being under the influence of psychedelics. We know the right and left sphere of the brain serve distinct functions in creating a unified image of our sensory environment. This can become unbalanced. One of the main intentions of the reflective technique I use is to offer tools for re- synchronisation as well as to open fields of enquiry to the viewer for which language-based theory is insufficient.

For this series, the emergence of a figurative element prompted me to look at the source material with new eyes, from a variety of perspectives. What developed could be described as ‘psycho-technical’ experiments, examining the subjects and resulting imagery from a bilateral perspective, looking for elements that jump out. The title ‘Polymorphic’ is a biological term that refers to processes within natural selection, where creatures of the same species develop and adapt distinct features to suit their environment. Our brains are fine-tuned to bilateral symmetry. Our early ancestors spent thousands of years surveying the landscape for food and predators. It was fascinating to see how many animal, bird and insect forms emerged from plant matter. This seems analogous to the widespread appearance of deities, entities and animal spirits represented in the art and architecture of countless ancient cultures and belief systems. This, in some ways, intends to symbolise the processes within natural selection where a plant evolves and develops features to suit the needs of the birds and insects who consume or distribute its nectar.

For these pieces I often played with a random selection process, diminishing my authority in order to see what might transpire out of its own accord. There were many surprise revelations during the composition that I have no way of recreating. In addition, my technique also aligns with the Rorschach method of psycho-evaluation, where the patient is diagnosed and treated based on their interpretation of simple inkblot patterns that are mirrored onto two sides of paper. Within the context of my imagery, it would serve the same purpose, presenting the viewer with an opportunity to self- evaluate based on the imaginary dialogue that is generated between the image and the self. 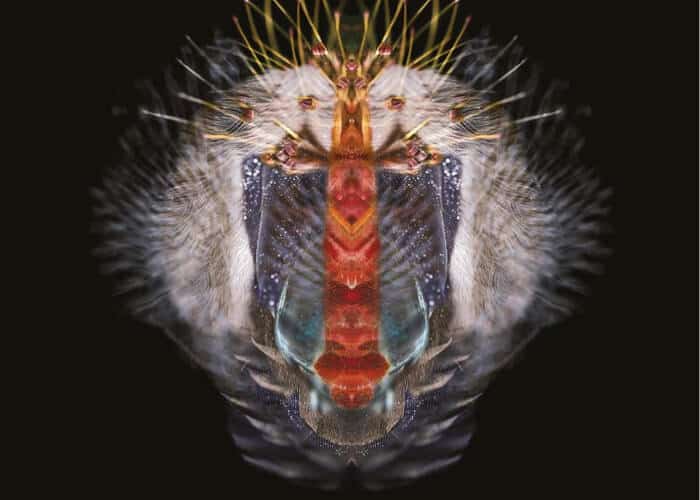 Your work combines geometric form with organic shapes. How do you believe this approach mirrors your combination of mysticism and science?

Nikola Tesla said that, “where there is matter, there is geometry.” It is the expansion mechanism for life force throughout theuniverse, and for me acts as something of a guide. Leonardo da Vinci exuded effortless mastery in both the science of art and the art of science, which verifies that the successful marriage of the observable and the ineffable holds universal, timeless appeal. Of course, one could live several lifetimes in the hope of reaching this depth of expression. ‘Magic’ is the sense of wonderment that cannot be fathomed by our thoughts and understanding, the layers beyond the physical appearance of things as perceived by our five senses. Take music for example: we can reduce it scientifically to waves and particles but what about the different feelings and emotions that it illicits, which seem to occur in the spaces between the notes and our bodies. Ultimately, consciousness is the boundless vessel that allows for both mysticism (the belief in magic) and science (the belief in quantifiable theory). Science polishes the gift of seeing and observing and has undoubtedly brought us considerable achievements, but underneath the richness of its language, something is missing. In truth there are certain things that we’re really not going to be able to get our heads around, because we have kept the gates of our hearts relatively shut, thereby limiting our cognitive capacities. It’s a bit like sending a message to the world beyond our senses that we don’t want to see, we don’t want to experience, we don’t want to feel, in that particular way. My images intend to honour the broadest possible notion of the nature of these realities.

Do you think being a self-trained artist has been helpful to your work?

I believe it’s been very helpful. The function of formal initiation in indigenous cultures is to bring clarity to the purpose and gifts of the individual and set them on their path. We’ve lost this in Western culture and as a result many young people of a certain age seek their own forms of (often destructive) self-initiation. I spent several years ‘initiating’ myself by visiting forests and wild areas until I felt compelled to honour these beautiful experiences in art. In this time, I gained the knowledge I needed to express this and explore the idiom further. When I feel I need some technical improvements, the Internet allows for an extraordinaryarray of specific tutorial guidance. Humans are creative beings. I don’t believe art school or other external learning methods to be the only way to discover this ‘inner voice.’ These environments can heighten comparison to others and self-criticism, which can create a rift between the self, the work and the pure pleasure of making it. I find these negative traits unhelpful and have seen them burden others seeking a creative path.

How do you maintain a degree of criticality when working with a subject such as the environment; or is your work beyond those kinds of questions?

When one starts to venture into the macro and micro-environments of the organic world, there is an overwhelming amount of information and beauty to be discovered. The act of capturing a tiny fraction of what presents itself, when we really take the care to look, carries a resonance I find valuable. Throughout the composition process, layers are constantly changing and fragmenting. Capturing everything that presents itself is both difficult and often visually overbearing. Selecting the elements that speak to each other requires a critical viewpoint as well as a willingness to detach and let some ideas go. I may have a section that I believe to be very strong or beautiful that does not seem to tie into the contextual framework of the piece. I imagine it to be similar for a musician who creates an amazing melody but can’t form the song around it. So yes, I do carry a self-critic as well as some trusted people with good eyes around me. I’ve always felt inclined to convey nature in the abstract with enough ‘familiarity’ to pose questions. This is where the geometry is so useful, it acts as the lure to something tangible that our brains recognise. Modern humans do have an abstract relationship to the environment, so it has always felt like an interesting language to develop. 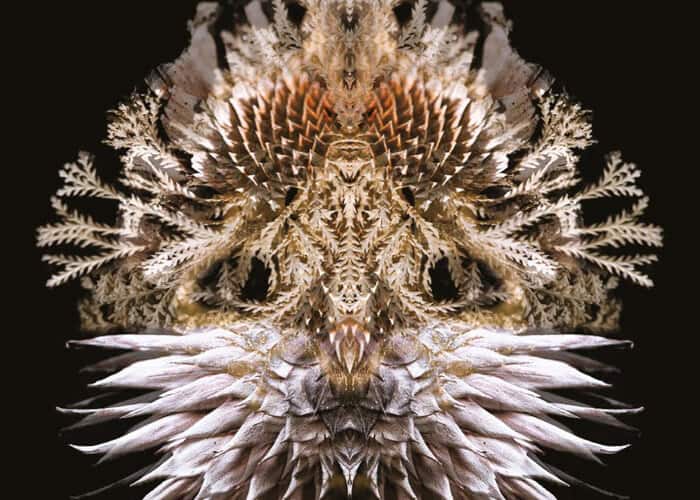 The titles of your work reference African tribes and African religions. Do your images mean to be representations and how do you, as an English-born artist, relate to these ideologies?

Some titles are reference to the time I spent and places I visited in West and Central Africa around a decade ago, a trip that prompted interest in the rituals, herbalism and use of magic in traditional African cultures. I spent five weeks travelling through the Sahara on foot and by camel. The combination of heat, silence and severe illness allowed for my first taste of profound inner reflection. Despite now living a Western lifestyle in Cape Town, these experiences still resonate and offer a much broader picture of the notion of reality as held in my Western mind. I was especially intrigued by the ceremonial aspect of the tribal groups I encountered, the masked dances that convey reverence to the spirit and ancestral worlds. Masks are used in African culture to bring life to or communicate with spirits, which seemed the opposite to how masks are used in the West, a mechanism for disguise or concealment.

When I started the series, I thought masks were being conveyed by the imagery, but I moved away from this once I realised that this placed visual limitations on what was being communicated. I was also drawn to the notion that in some tribal groups, the soul of a newborn comes into the psychical body at some juncture shortly after birth. This is, in some ways, mirrored in some of my compositions that started as amorphous shapes that gradually adopted the sense of a living being. In truth, my travels in Africa were based on an intuitive step out of the comfort of a Western existence; the people, traditions, raw beauty and vastness of its wild areas resulted in the gates of my heart being blown open, which allowed for a new form of cognition that feeds my creative process. So overall it becomes an exciting new path, a new journey, which has nothing to do with whether you are developed or under- developed, nothing to do with ethnicity or religion. It is about being a human being in a world that is all magical and always has been and is best left that way so that we can read the information that it offers us.

This interview was first publiched in the March 2016 issue of ART AFRICA, ‘Looking Further North.’