in AFRICAN ART, CONTEMPORARY ART, CROSS-CULTURAL, EXHIBITION, IDENTITY, MIXED MEDIA, PAINTING, PHOTOGRAPHY, REVIEW
Share on facebook
Share on twitter
Share on email
Share on whatsapp
Nijdeka Akunyili Crosby encourages you to keep looking; the more you gaze at her works, the more layers of materiality and meaning are revealed. Initially they seem fairly self-explanatory, intimate domestic scenes in seemingly generic middle-class rooms, some empty, others occupied. The colours are flat and the people stylised, somewhat reminiscent of Congolese artist Cheri Samba’s comic-style portraits (albeit a softer, more painterly version). The works draw you in with the layers of photomontage and collage. Woven into the figures and surrounding rooms, these layers disrupt the perspective between the three-dimensional rooms depicted and the two-dimensional picture plane they are depicted on. 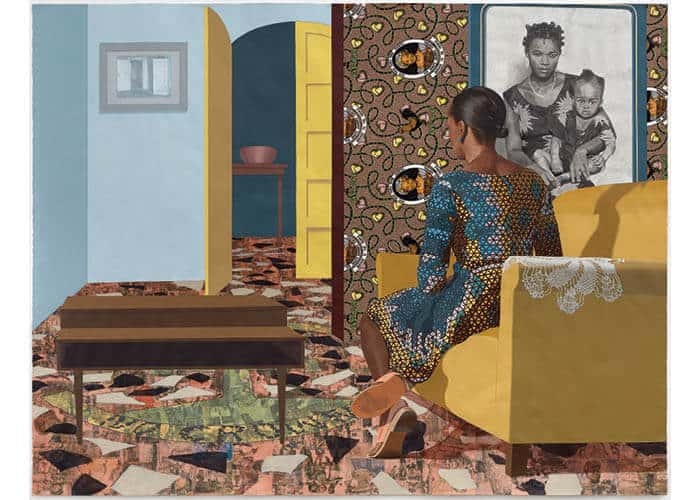 The works on display in ‘Portals,’ Akunyili Crosby’s first solo exhibition in Europe, are all similar in size, creating a sense of related domestic spaces. They are evenly spaced around the Victoria Miro gallery, displayed using bulldog clips. The lack of framing adds to the materiality of the works – you can see the rough paper edges and layers of imagery up close. It is this materiality that makes her works come alive, the flat colour, painterly figures, traditional fabric and photographs incorporated together to create a recognisable yet undefinable space. Each of Akunyili Crosby’s works is an individual portal into a domestic scene – echoed by the title of the exhibition – where the windows and doors within become further portals to a “liminal place.”
Akunyili Crosby uses highly personal subject matter in her work, combined with pop culture imagery from Nigeria and America. The figures depicted are often the artist and her family, portrayed inside rooms based on her home in Los Angeles and Nigerian architecture. The painterly figures and flat, coloured walls create a subtly jarring composition of three dimensional and flat surfaces. The flatness adds a graphic element to the work, enhanced by the intricately layered photo-transfers. The images used for the layered phototransfer patterns have a strong cultural significance that is foregrounded through their repetition. These photos show Nigerian women winning Olympic races, actresses in Nigerian television shows, Akunyili Crosby’s mother (a well-known public figure in Nigeria) and other culturally and personally significant figures. 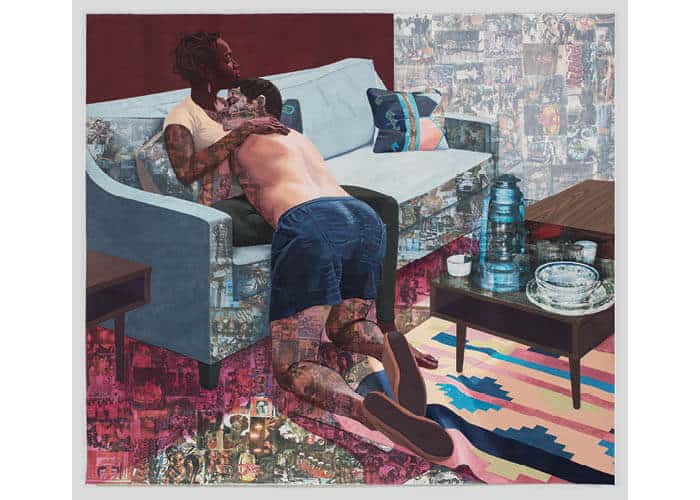 In contrast to the oft-depicted, perceived hardships of living in Nigeria, Akunyili Crosby portrays powerful women, joyful moments and cultural cross-pollination as a part of everyday life. In See Through (2016), black feminist icon Grace Jones make an appearance on an old TV set, placed in front of a strange barred frame that holds a collage of images of Nigerian men and women. Behind this scene is wallpaper made up of a commemorative Nigerian fabric featuring Dora Akunyili, the artist’s mother. In equally personal works, the artist uses the reoccurring motif of multi-racial couples, seen in the main figures of Ike Ya (2016) and as the fabric wallpaper featured in Wedding Souvenirs (2016). She tackles the cultural mix of her African heritage with her contemporary experience through these works, particularly relevant to her as a black Nigerian-American women married to a white American man. 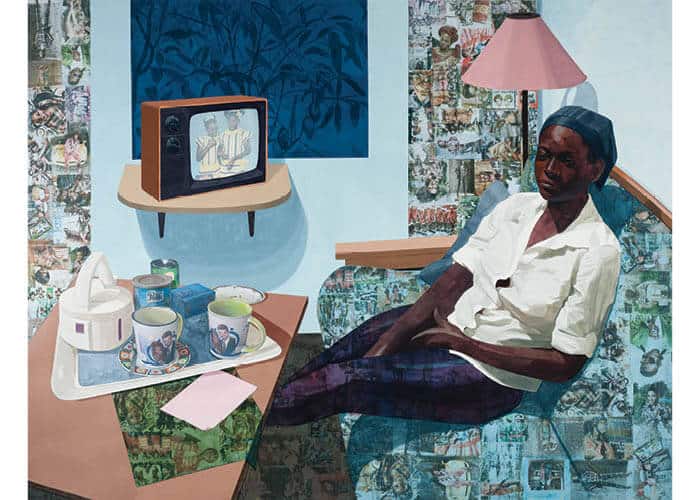 Her works effectively combine multiple cultural references; Los Angeles palms and Nigerian kerosene lamps in Grandmother’s Parlour (2015), her grandmothers table in The Twain Shall Meet (2015). As Akunyili Crosby explained in an interview with The Independent, she’s attempting to occupy an inbetween space, one where the two cultures of America and Nigeria converge in strange scenes with strong references to both. The multi-layered approach (both of technique and imagery) enhances this idea. Akunyili Crosby avoids the well-worn narrative of the West as the colonial oppressor and Africa as the victim, instead drawing on her own experience to create a far more complex space of cross-cultural influences. In her impactful works, Nigeria co-opts American influences into its own powerful identity, just as American culture has been influenced by Nigeria.
Siobhan Keam is a freelance art writer and editor based in London.
Njideka Akunyili Crosby’s exhibition ‘Portals’ was on show at Victoria Miro, London, from the 4 October – 5 November 2016.