“It is very tempting to get lost in the surface of MJ Lourens’ paintings, to dwell there, to remain floating among the glistening city lights and sweeping sunset hues. And why not?” asked curator Charis de Kock at the opening of MJ Lourens’ exhibition ‘Proximity by Proxy’ at the Barnard Gallery in Cape Town. 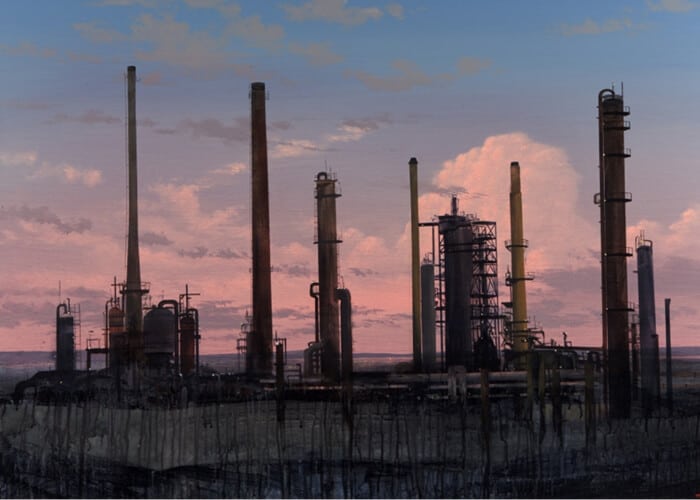 MJ Lourens, detail of Industria – After the Rain, 2016. Acrylic on board. Image courtesy of Barnard Gallery.

These surfaces are marvelous things, stunning in their realism, their gleaming varnishes creating a luscious sheen washing over expertly rendered landscapes. But to engage only with the surfaces of these paintings is to forego so much of what is going on beneath, and beyond.

In fact, to fully grapple with these works, one must actively rupture the surface, question it, and travel beyond it. In doing so, we parallel what MJ does every time he picks up his paintbrush – through the mapping of distances, the exploration of unknown cities, the travelling to empty and irrational spaces, we seek and contend with the ‘in-between’ place. In between surface and depth, here and there, presence and absence, real and surreal. The tension between these polarities activates MJ’s scenes, creating a palpable unease, a sense of foreboding, a pregnant stillness that saturates the images with weighty expectation. 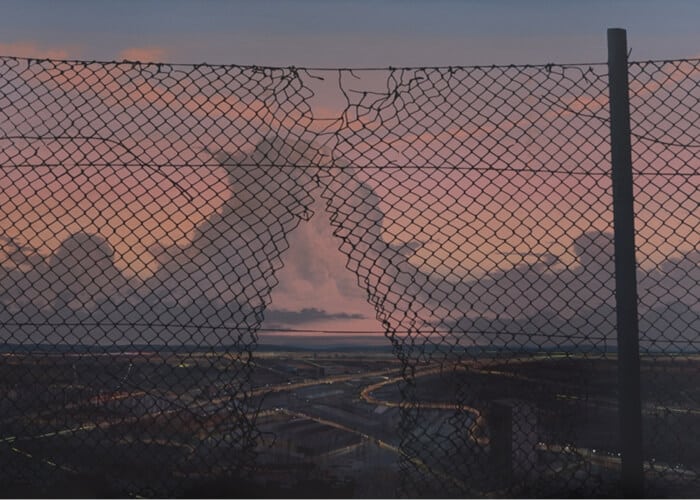 This pregnant stillness aligns MJ’s work with that of Italian metaphysical painter Giorgio de Chirico. de Chirico, active in the first decades of the twentieth century, is known for his enigmatic scenes of abandoned Italian squares, populated only by classical statues and framed by familiar Italian architecture. There are no people, only shadows that extend in the starkly in the harsh afternoon sun. Any activity is happening in the distance – a far off settlement, a train passing, a private conversation wholly beyond our reach. We are held fast in this space of quietude, having somehow found ourselves at the centre of this irrational dream city. While MJ’s imagery of industrial towers, urban cityscapes, mining dumps and graffiti-ed walls might seem miles away from de Chirico’s heady Mediterranean mileaus, they achieve a strikingly similar effect on the viewer. The irrationality of MJ’s city scenes – billboards placed miles away from any city or road, suburban walls and telephone lines in what appears to be the middle of nowhere, create a is a sense of displacement, discomfort even, a creeping sense of foreboding. Something is about to happen, or has already happened or is already happening, just beyond the frame – we cannot know.  We are stuck in that extending, vibrating moment between calm and chaos. It is the same feeling of being in the midst of a dream which is approaching the edge of a nightmare but is not quite there yet. 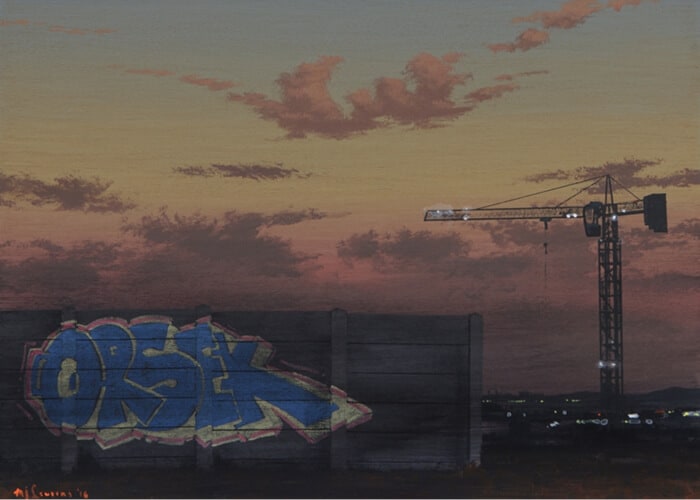 It is no surprise then, that MJ has been profoundly influenced by Surrealism, to which de Chirico was a precursor. The landscapes of such artists as Salvador Dali and Yves Tanguy use landscape as a way to map the mind, and specifically, the unconscious. They too possess that extraordinary stillness and melancholy, that uncanny quiet and eerie emptiness. In a conversation with MJ, he made an interesting comment about the vast cumulus clouds that reoccur time and time again in his paintings. “Those clouds are my other mind”, he said. This was a very revealing comment, I thought – it demonstrates that with MJ, as with the Surrealists, self and place are not two independent things that can be easily separated from each other, but are endlessly entangled and interdependent. Landscape and natural forms, horizons and distances, earth and sky – all become manifestations of an intensely personal exploration of the self. MJ’s paintings are thus palimpsests of subjectivity and space, observation and introspection, surface and depth. 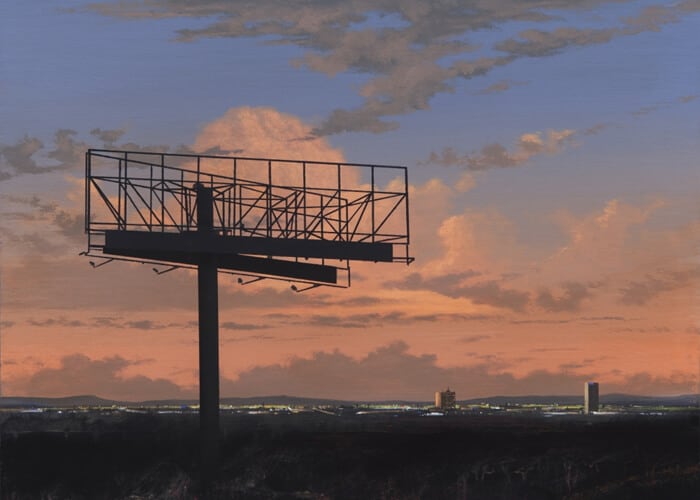 The intersection of subjectivity and space that occurs in MJ’s and surrealist landscape painting and is an idea which reoccurs in Walter Benjamin’s writings on the city and urban life. For Benjamin, the city shapes the subject’s experience just as the subject inscribes the city with memories and emotions. The two are involved in an ongoing mutual evaluation and alteration. Thus the city, or the occupied space, acts as a form of memory, or a physical, tangible autobiography of the subject that traverses it. In our conversations MJ related another telling story, about how as a young boy in Pretoria he would often take himself on lone walks through the suburban streets empty in the settling dusk, climbing the Highveld koppies and looking out towards the distant city lights. Clearly that experience imprinted itself on MJ very powerfully, as is evident in how often that same composition reoccurs in his paintings, and the persistent undercurrent of vulnerability, isolation and alienation that pervades the scenes. Thus MJ’s scenes are not simply astute observations, but explorations, occupations and reoccupations of feelings of nostalgia and yearning as they manifest themselves in the city scapes and sunset skies. 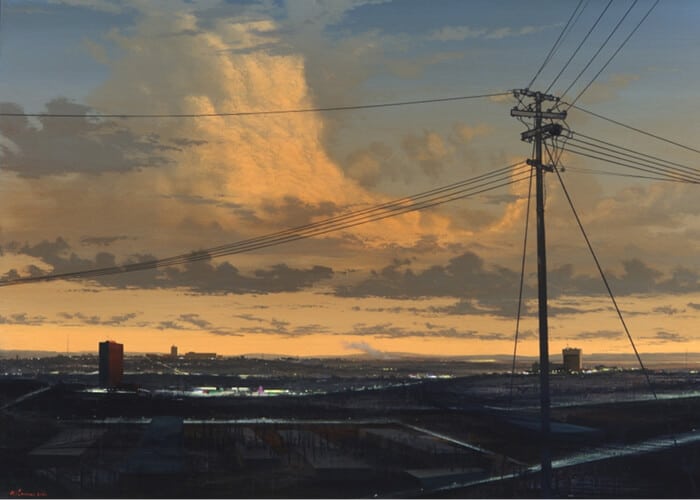 Within this body of work, the industrial has become a more prominent presence in MJ’s landscapes. This is, again, another manifestation of MJ’s own personal nostalgia for the industrial parks that he would see when traveling beyond the city outskirts as a child, and the strange allure they always held for him. They are liminal places, and here the notion of the in between comes into play again. They are suspended spaces, powering on despite our obliviousness to their presence, stranded in a no mans land between cities. They also make for poignant symbols of the mind, with the industrious mining deep into the earth perhaps symbolizing an attempt to grapple with the subconscious, to reach some nugget of illumination or truth from deep below. But the reoccurrence of industry also signifies an unease about the human presence within the natural landscape. The seemingly unyielding steel towers set against vast clouds – which are ephemeral and ever shifting – remind us of the inescapable transience of all things, the unavoidable entropy of the universe and life within it. MJ’s broken down fences, empty billboards, graffit-ed walls and scaffolded monuments speak to this same unease about the impermanence of human endeavor, and the desire to have some lasting effect despite or in spite of this.

And so I urge you tonight to look beyond the surface, look closer, look through. Just as MJ has ruptured his wire fences, torn down the billboard advertisements to reveal the steel structures behind, these paintings require you to break through the surface and consider what is moving just beneath, and beyond. Look not for recognisability, you will not find Cape Town or Johannesburg or Pretoria here. While these landscapes have an undeniable South African character, they are in essence a series of reiterations of the same profoundly personal meditation on space and the self and the powerful interactions between the two. And yet in being so personal they are also universal, for they capture the many ways we relate to the spaces around us, and speak to both the comfort and unease, the terror and awe, of those relationships. So embrace the enigma here, amongst the towering power plants, the sublime skies, the sprawling cities; and the quiet wonder of the human at the center of it all.

Charis de Kock is the curator at Barnard Gallery, Cape Town. This text is drawn from the recent opening address at MJ Lourens’ exhibition, ‘Proximity by Proxy’ which runs until 31 May 2016.