On June 24 2015, a panel discussion took place at the Association of the Visual Arts (AVA), Cape Town’s oldest non-profit public benefit organisation and art gallery. The objective was to discuss ‘Public Architecture, Heritage and the City,’ the exhibition which served as the backdrop for the debate chaired by Marilyn Martin. The panel, comprised of prominent figures of the artistic and intellectual landscape, included Andrew Lamprecht, Hayden Proud, Jo Noero and Matthew Blackman. Javiera Cadiz Bedini covered the discussion for ARTsouthAFRICA. 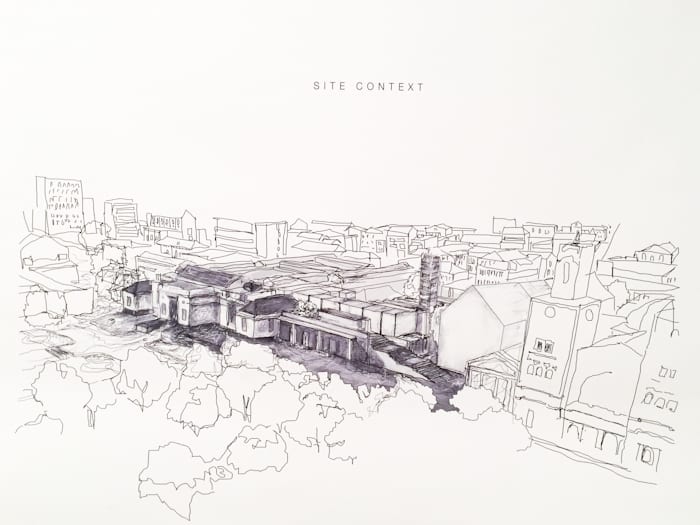 In 1993 Martin voiced her “dream” of transforming the parking lot that stands next to the gallery. The discussions that followed led to the present exhibition, which features work produced by 12 UCT Honours students from the School of Architecture, Planning + Geomatics. As former director of the school, Jo Noero guided the students in researching and conceptualising the extension of the Iziko South African National Gallery to include a Centre for Contemporary Art. These imaginative projects offer visual alternatives to what this space could become. In the lead up to the panel discussion, ARTsouthAFRICA interviewed Jo Noero in his studio in Cape Town. Watch the video here.

The proposals, plans and models envisioned by these future architects interweaved architectural concepts to formulate an amicable understanding between the past (represented by the exiting building) and the future envisioned by the models. The creative processes were guided by ideas around museological and architectural theories. But more than the aesthetic functions of a building that would serve to house contemporary art in Africa, the students were challenged to structure their thinking around the needs and the role of the institution as a public space. The young architects also had to consider facilities such as storage space, restaurants and cafés. Something as simple as a shop for instance – which has been closed down at the present gallery – is a fundamental asset that has the potential not only to generate income, but also to inspire interest, invoke remembrance (a souvenir) and nurture intellectual growth through literature (books for sale). In international art establishments these are taken for granted as a necessity in an art space of social significance. Yet these basic requirements appear to be too excessive for the place that showcases some of South Africa’s most important treasures.

While the historic building displays a wealth of national heritage, there is a need to have an additional structure that represents our future, our people and our contemporary moment. As Hayden Proud, curator and acting director of the Iziko South African National Gallery (ISANG), notes: definitions of art have changed and so too has the function of the building which was designed in a particular time. It is almost archaic to place contemporary art in the “old-fashioned frame” that is the historic building. This is where the fresh ideas of the students enliven the debate. Proud provided a historical glance by looking at the origins of the gallery. The National collection was founded in the 1870s with a bequest of paintings from the estate of Thomas Butterworth Bayley. The assistance and guidance of various ‘visionaries’ including Dr Alfred de Pass helped to develop the collection over the years. The existing building officially opened to the public in 1930 and has remained largely unchanged since. However, eighty-five years is enough time for the idea of expansion to knock at the door and demand an entrance.

As a non-commercial and nationally-funded institution, the ISANG has a crucial role to play in the advancement of our society. That is, if we take seriously that art is a reflection of our humanity. And times are changing. What does public architecture mean to the person on the street? How does a public building speak to the public for which it was designed, and how does it include them? These are questions that came to the fore at the discussion.

While funding is one of the greatest challenges to institutional change, passion and enthusiasm are present and tangible in both the students’ projects as well as the audience’s engagement. The struggle to raise funds cannot be blamed solely on the present government, as it is a dilemma that has existed since the very conception of the art establishment itself. We need more imagination. Successful initiatives like First Thursdays and Museum Night show some of the ways that creative thinking can lead art establishments to thrive in a difficult economic market. These programmes show that the society outside of the art industry is hungry for something new. This also implores established institutions and art communities to adapt to the times by making necessary changes. For instance, the alteration of opening hours to suit those of the working public is one way to meet these needs. A new vocabulary that echoes the contemporary cultural and intellectual life is required.

The importance of this discussion hinges on the need to find a careful balance between preserving the history and heritage of the museum, while situating it firmly in the present. As can be expected, this led to a multi-layered discussion that engrossed the audience and which cut close to the bone of various issues that have come up in the past few months in national events. The establishment of the Zeitz MOCAA and the #RhodesMustFall Movement are happenings that insist we confront our past in order to propel us towards the future. This urges us to look at the historic structure that is the National Gallery and question its role now.

It is not impossible to extend the National Gallery, despite the fact that it appears to be an unattainable reality. The proposal to extend it is an ideal that houses hope. Perhaps the idea of a Centre for Contemporary Art is only that: an ideal for which to strive. And while Andrew Lamprecht urges us to “stop complaining and do something,” Blackman adds that moaning “cannot be instructed.” And why should it?

Chilean-born Javiera Cadiz Bedini obtained a multidisciplinary MA (Art history, Performance and Literature) from the University of Siena in Italy thanks to an international Erasmus Mundus Scholarship. She holds a PGCE (Senior Phase and Further Education) and BA (Art History and Drama) from the University of Cape Town. She has worked on various continents including Africa, South America, South East Asia and Europe, experiences which have  enriched her culturally, intellectually and linguistically. 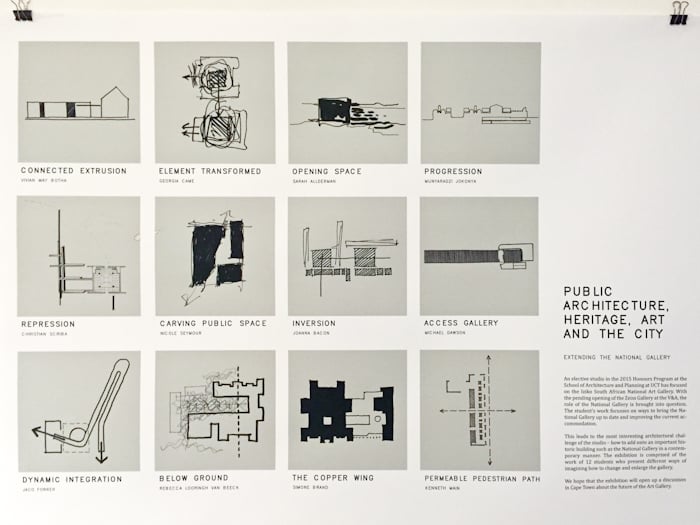 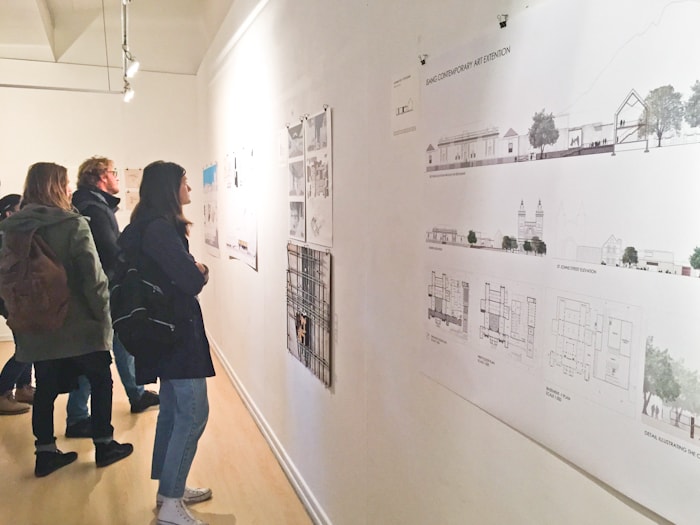 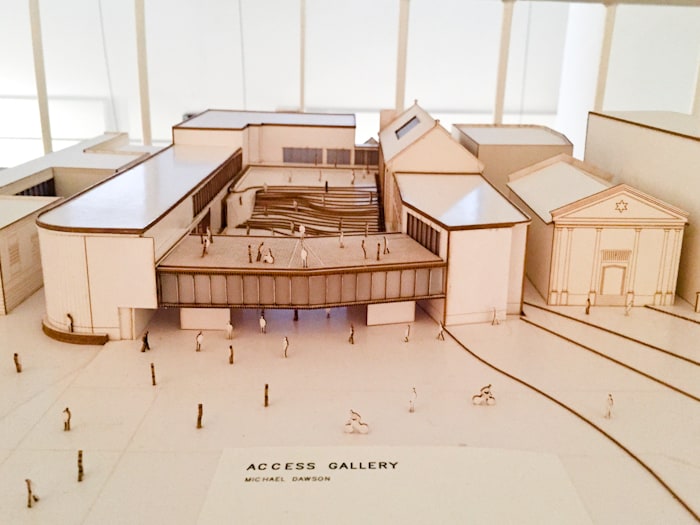 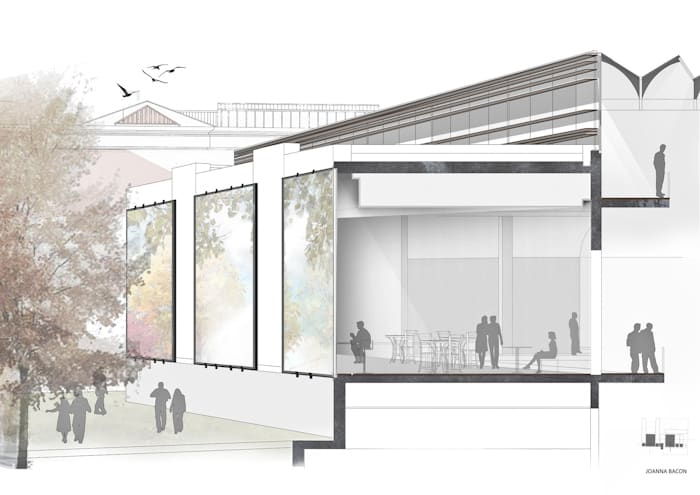 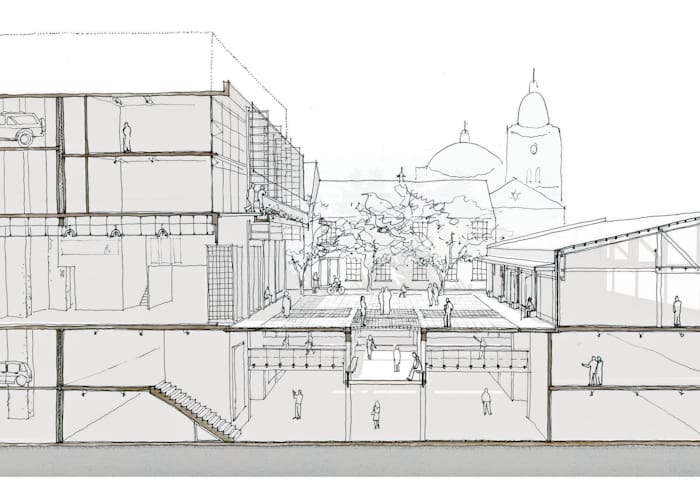 ABOVE: Student work at ‘Public Architecture, Heritage and the City.’ All images courtesy of AVA Gallery, Cape Town.