ART AFRICA spoke to South African artist Paul Blomkamp about his latest body of work, ‘Quanta,’ which will be on show at Objekt | Design | Art (ODA), Franschhoek from the 21 October – 19 November 2016. Here Blomkamp takes us through his history and working process, placing light and the ‘electrical essence’ of quantum science at the forefront of his practice. 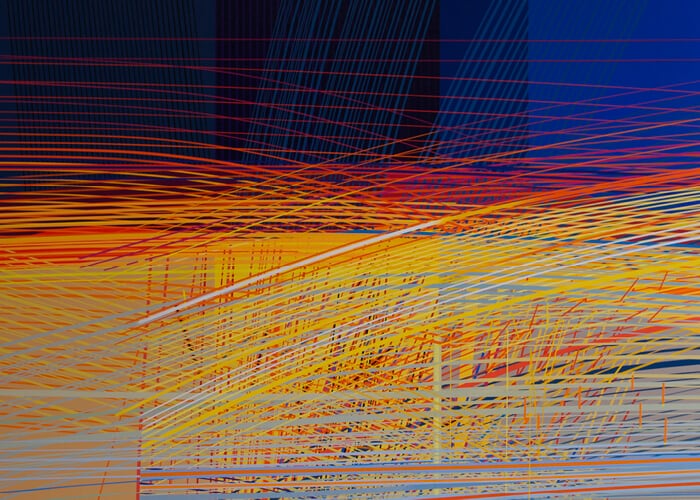 Paul Blomkamp, detail of Electrical Edge of the Earth (2). Acrylic on canvas, 140 x 140 cm. All images courtesy of the artist and Objekt | Design | Art Gallery, Franschhoek.

ART AFRICA: What attracted you to painting and where does your interest in Quantum Physics originate?

Paul Blomkamp: In 1979 (when I was thirty years old) I contracted Legionniares disease from drinking water on a golf course. Within a week I was ‘dead.’ The resultant near death experience transported me to a place where energy and its workings were revealed in such utter detail and clarity that it drastically changed the way I look at everything; life, death, and painting. What I witnessed and experienced was the very details of immensity. I had fallen into a sea of seething electrical activity where the light was brighter than bright. From being very ill I taught myself to meditate, in an attempt to try understand what was happening to me and then to translate this experience onto canvas.

I had been connected to the ‘Electrical Essence.’ It is this essence that informs everything that I paint. My fascination with Quantum Physics was born out of a dire need to understand and become more connected to this. 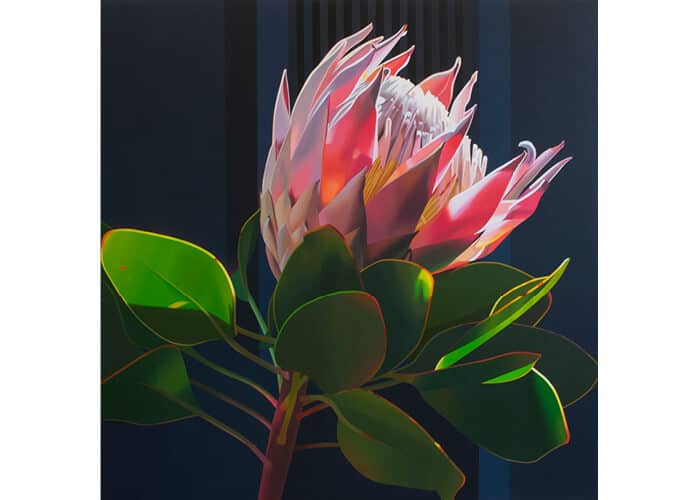 You’ve been practicing as an artist for over forty years, painting predominantly on canvas, paper and stained glass. How does your approach to these surfaces vary, and to what end?

Each surface I work on helps me, in its own way, make the millions of marks I make. Each line is nothing more than a track of shooting energy. When working on paper these marks are quick and fierce. The quantum work is a world of great speed and activity. My paper works allow me to ‘scratch’ these lines of energy quickly. The process is fast, physical, and frenetic. I use canvas for the detail and sharp clarity It allows me, working on a very smooth surface. It offers me precision and a clarity of edge and shape, and of course, size. My canvas work is more calculated and constructed. No place for a brush stroke, although I use only brushes to paint with. This is because light itself has no texture. If I paint a Protea say, I am not painting the texture of a Protea, but rather an arrangement of its intrinsic light. In this case texture stands in the way of the purity of this light. 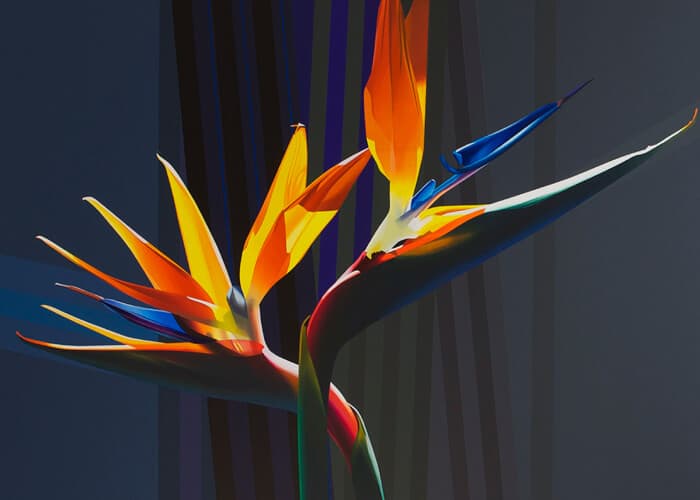 The title for your upcoming exhibition ‘Quanta’ (plural for Quantum) is drawn from physics and refers to the minimum amount of any physical entity involved in an interaction. What constitutes this ‘interaction’ in relation to your paintings?

Quantum Physics describe how everything is held together by an ‘Electric Essence.’ Billions of electrical transactions are taking place at breakneck speed every second. Not only within us, but through every thing that exists, everywhere. I was given a glimpse of this activity, choreographed by some all encompassing intelligence. My compulsion to paint it and share it is overwhelming. The mystery and fascination for me as an artist is to explore this interaction on canvas. How does one paint a single Protea petal, knowing that within it lies a treasure chest of electrical information and intelligence? This is where I need to make the invisible visible. I know it is there, so I must access it and make it seen. 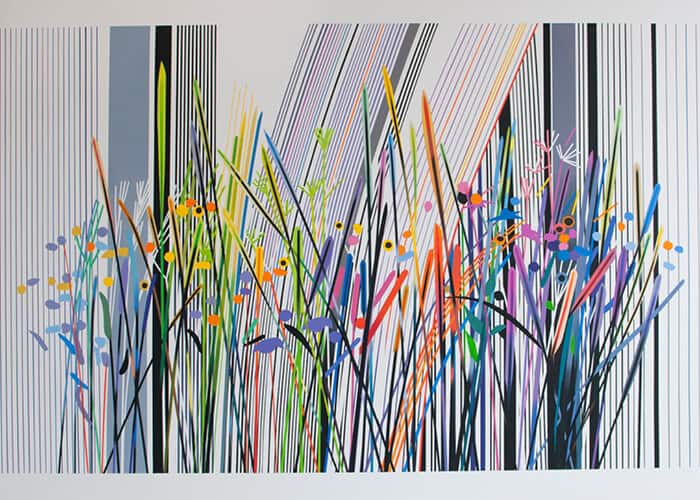 Given your earlier experiences painting stained glass on churches, I’m interested to know whether your interest in quantum physics is also connected to a deep sense of spirituality, one’s relation to the universe at large?

Everything is connected, to call it spirituality or Quantum Physics is not important to me. My connection to this electrical essence is what is important. That this essence is imbued with qualities of love and compassion was a shock to me. The universe has an immeasurable intelligence, finding love and compassion that exists in this intricate matrix of vibrant bits of electricity is the most liberating discovery I have made.

In your artist statement you quote Paul Klee in saying “I am here to make the invisible visible.” Could you elaborate on this in relation to your work?

When I was ten years old my dear father gave me a book on Paul Klee’s art. He was painting things I could not understand, but felt was right. He was explaining unseen secrets in his painting. Twenty years before being thrust into this quantum world, I knew that’s what I wanted to do with my life. To show the beauty of the mysterious. 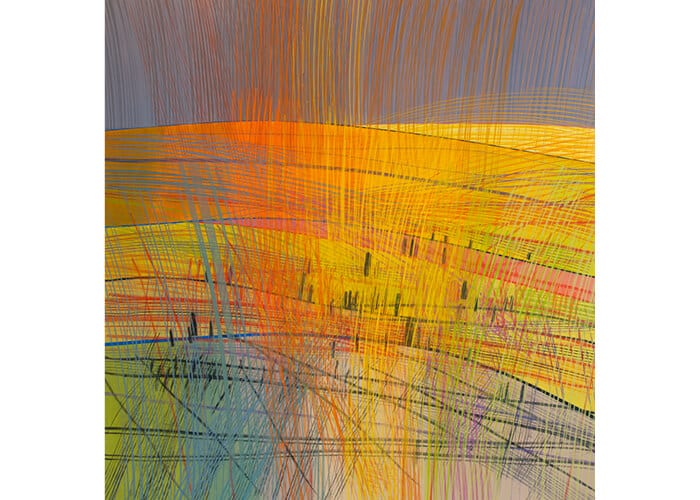 By painting in singular, large strokes, much information is left out of your paintings. Instead what you find are pieces of sensory information – clues. How important is the viewer to you in ‘completing’ this process?

There are no large singular brushstrokes in my work. There is no commitment to texture, only to the portrayal of light. Light is everything, it comes before texture. If I want to paint light then texture is left behind. The seduction of using juicy thick paint is not strong enough for me. Light comes first, way beyond technique. The clues that connect with the viewer are in my use of an uncompromising crisp colours, sharpness of edge, and the interaction of repetitive lines. I sometimes think of my paintings as mathematical equations, in the process of being solved. I am a passionate painter, for sure, but so much of me is also a scientist. If I could place my easel smack in the middle of the large Hadron Particle Collider in Czern, I would be a happy man.

Your series of oils on paper ‘Windveld Highveld’ also draws inspiration from the Magaliesberg Mountain range in Gauteng. What was it about the Magaliesberg that you sought to capture, or rather your experience of this region?

My love and connection with the Magaliesberg is an immense affair. In the Magaliesberg I found a place where energy shared itself with me. During my many years of recovering from my illness I found the energy field that clocked these mountains and fields completely enervating. When I started painting after returning from my excursions into the mountains I found it was not a visual scene I was trying to reproduce, but rather a ‘feeling’ of energy that the place had imparted to me – without energy we are nothing. Painting energy is the secret to energising myself. The quest of this artist/amateur scientist is to search for this ‘electric essence’ and to paint it as purely and authentically as I can. During my recovery I read many books on Quantum Physics, philosophy and meditation. One book, Stalking the wild Pendulum, by Izak Bentov inspired me, not only with its wonderful title, to accept the invitation to explore and discover the mysterious and miraculous workings of our existence. Also a book by an anonymous 14th century monk, inviting me to step into the ‘cloud of unknowing’ where everything is illuminated, and his invocation not to be seduced by the obvious.

Paul Blomkamp’s solo exhibition ‘Quanta’ will be on show at Objekt | Design | Art Gallery (ODA), Franschhoek from the 21 October – 19 November 2016.