Redirecting The Lens: ART AFRICA In Conversation with Gabriel Bauret

in News Articles 2013
Share on facebook
Share on twitter
Share on email
Share on whatsapp
The Biennale of Photography in the Contemporary Arab World had its inaugural run from November 2015 to January 2016, featuring over fifty artists from areas surrounding the Mediterranean. Joining ART AFRICA in conversation is Gabriel Bauret, the Chief Curator. In the following interview he addresses notions of Arab identity, the biennale’s vision and negotiating artistic practice in a time of fundamentalist-led terror attacks. 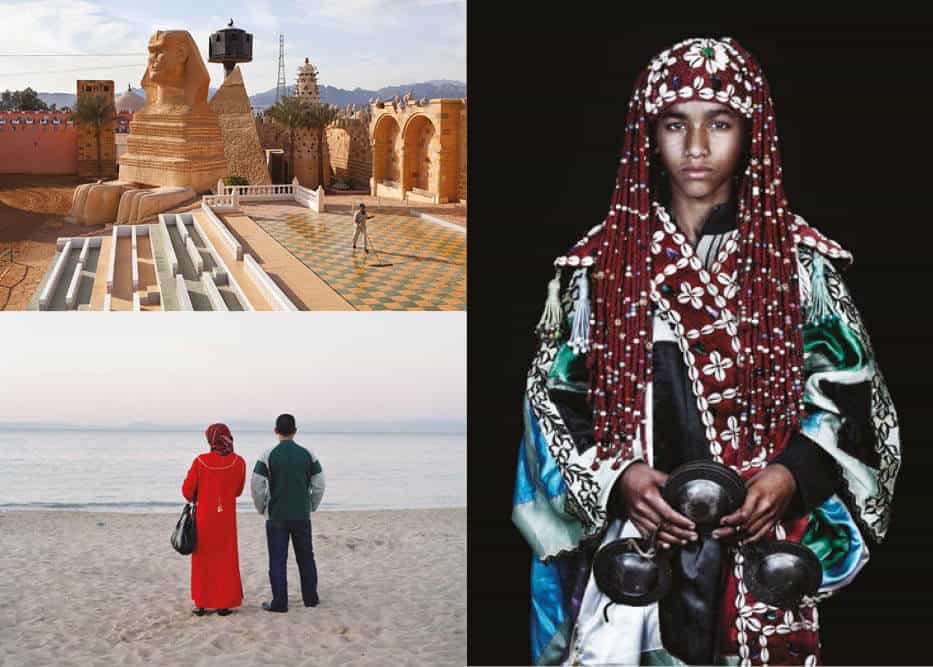 Top Left: Andrea & Magda, Sinai Park, Décor mille et une nuit, 2014 © Andrea & Magda. Exhibited at the Maison Européenne de la Photographie.
Bottom Left: Hicham Gardaf, Un couple regardant la mer au crépuscule, Tanger, 2014 © Hicham Gardaf. Courtesy Galerie 127. Exhibited at The Arab World Institute.
Right: Leila Alaoui, Tamesloh, Moyen-Atlas, 2011. © Leila Alaoui. Exhibited at the Maison Européenne de la Photographie.
ART AFRICA: As the first biennale of its kind to be hosted in Paris, could you tell us a bit more about how it came about? What drove you to bring this body of work together and present it in this particular art capital?
Gabriel Bauret: The inaugural Biennale of Photography in the Contemporary Arab World came about as a joint initiative of the Institut du Monde Arabe and the Maison Européenne de la Photographie. Our intention for bringing these two institutions together was to harness their respective and complimentary skill sets, namely IMA’s focus on the different cultures within the Arab world and MEP’s special knowledge around modern and contemporary photography. Logically, the biennale followed as a continuation of these interests. The biennale has responded primarily to a desire to know more and to satisfy an already widespread curiosity about this region. A few galleries had presented works at Paris Photo 2015 and we are now more aware of the emerging art market in some parts of the Arab world. The idea was to transform these diverse initiatives with an event that could take this further. Paris occupies a very important niche in the field of photography, so the biennale conforms to the city’s existing artistic ambitions. 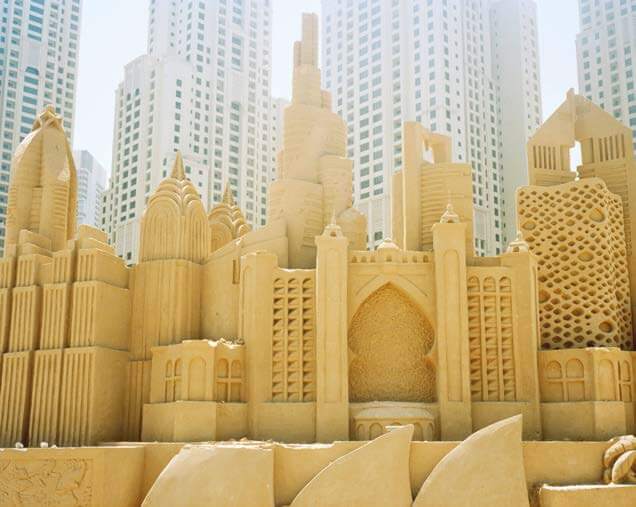 Farah Al Qasimi, Sandcastles, Dubai, 2014 © Farah Al Qasimi. Courtesy Third Line Gallery. Exhibited at The Arab World Institute.
To some, the ‘Arab’ world may be defined by shared territory, language, religion, culture or history (or all of the above). The notion of a uniform ‘Arab’ identity seems to be as unrealistic as that of a uniform ‘African’ identity in view of the pluralistic forms this identity may take. How has the notion of the ‘Arab world’ been addressed by some of the participating artists?
The biennale was constructed to allow visitors to discover the multiplicity of Arab photography. Photographers present a plurality of preoccupations: society, landscape, history, memory. We can’t really talk about ‘schools’ of photography in this broad scope of imagery.
Arab photographers are mobile across multiple regions, and some leave the Arab
world territories for cities (such as Paris, Berlin, London and New York) where their professional status as artists is possible. While many photographers emigrate, they tend to maintain a strong bond with their country of origin and this bond often constitutes the central theme of their work.
We have chosen to contrast the work of photographers who are originally from the Arab World with the work of Occidental photographers. There is a tradition of documenting travel too and within the Middle East or the Maghreb countries that certain European photographers perpetuate, while adapting to current photographic forms. Others, however, are more interested in social or political problems that may arise. The biennale is an occasion to confront all of these distinct approaches.
We are curious to know how an exhibition of this kind has been received in Paris and if it has suffered from the common (incorrect) conflagration of the ‘Arab world’ in the context of Islamic fundamentalism and recent Islamic terror attacks. How have the works been received by Parisian visitors and the media?
The biennale opened a few days before the attacks in Paris on the 13th of November 2015. The attacks mobilised the public attention to look at the Arab World and its components, including the religious aspects. Part of the press coverage for the biennale emphasised the importance of such a project to bring nuances to views of the Arab World and highlight its great diversity. As underlined by the IMA president, Jack Lang, it is in the photographers’ frozen images that we are able to fight stereotypes and clichés that all too often fall on the Arab World. The biennale was seen by a large number of people, with IMA alone receiving more than eleven thousand visitors, which is a very respectable score for a fairly specialised exhibition in this particular context. 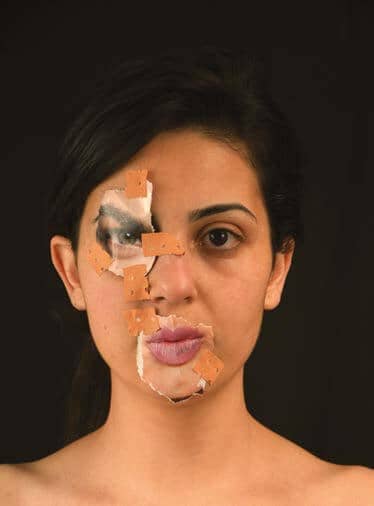 Ihsane Chetuan, Autoportrait, 2014. © Ihsane Chetuan. Exhibited at The Cité Internationale des Arts.
What common themes exist among the works exhibited? Are there specific subjects or themes that photographers in the ‘Arab World’ tend to focus on more than others? Are there any specific photographers that stand out for you?
Before speaking of themes, I would like to mention the fact that a number of women in the Arab World have adopted the medium of photography, often to deal with difficult subjects: revolution, the conditions of women in the Arab World and religion. It is important to point this out because women photographers who come from the Arab World today are following a current that emerged a number of years ago in Europe and the United States, namely that photography is not just a profession for men.
I do not mention any names here, except that of Leila Alaoui who lost her life following a recent attack in Burkina Faso. This happened on the same day that we took down her exhibition, ‘The Moroccans,’ at the Maison Européenne de la Photographie. She embodied youth, curiosity, sensibility and humanism in her life and work.
To return to the practice of photography in the Arab World, it seems that it is still quite difficult to photograph and show the ‘other,’ or (if this is not the case) to mention the name of the photographed subjects. Therefore, we discovered, photographers (men and women alike) choose to make themselves the subject of self-portraits in order to address certain themes.
It is difficult to discern dominant aesthetic trends within the Arab World. I somehow feel that Arab photographers are only just discovering the world of contemporary photography, with a variety of forms and an emerging art market. It seems to me that they are only starting to adapt to all of this in order to voice their concerns and their dreams.
How do you plan to develop the ‘Biennale of Photography in the Contemporary Arab World’ in the future? Are there any particular considerations that need to be taken into account when moving forward with the event?
We must continue to explore the world through the artists, without changing course in this regard. The biennale will continue to take an interest in contemporary photographic practices: personal projects, the quality of content and form, work that develops over time and the lens of ‘hindsight.’ In the Arab World, the countries that possess a photographic tradition are often located in the Middle East (for example, there are many photographers based in Beirut). We also acknowledge the important photographic activity taking place in Morocco. In the Gulf, an art market may be developing, but many areas remain in the shadows because we don’t know much about their photographic practices yet. Reaching into these areas is an interesting objective for the next biennale, to be held in 2017. In this latest edition we touched on the themes of landscape, interiors, culture, identity and the Arab Spring, but we must also continue to explore the changing themes addressed by the photographers.
The Biennale of Photography in the Contemporary Arab World 2015, a joint initiative of the Institut du Monde Arabe and the Maison Européenne de la Photographie, ran across multiple locations in Paris from 10 November 2015 – 17 January 2016.
This interview was first published in the March 2016 issue of ART AFRICA, ‘Looking Further North.’