Remembering the life of Johnny Clegg

What is the role of the artist? What is the purpose of art? These are profound questions to be sure, but critical if we are to have any real hope of profoundly understanding and framing the legacy of Johnny Clegg, the iconic South African musician who died in July 2019. If Nelson Mandela was the father of modern South Africa, then Clegg was – without a doubt – its troubadour. 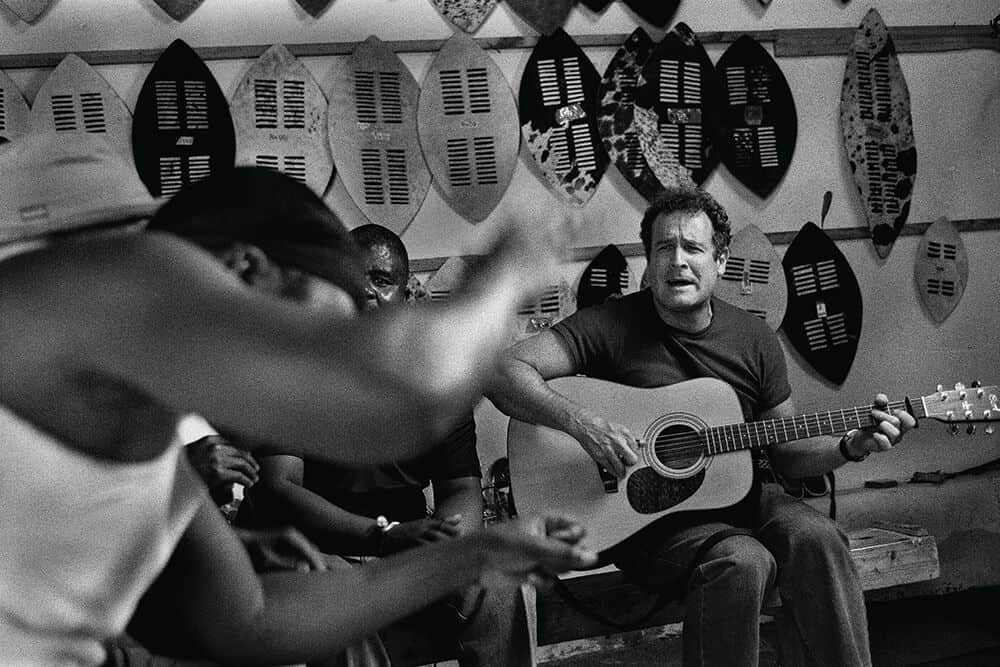 And so, art is everywhere, since artifice is at the very heart of reality. And so, art is dead, not only because its critical transcendence is gone, but because reality itself, entirely impregnated by an aesthetic which is inseparable from its structure, has been confused with its image. Reality no longer has the time to take on the appearance of reality. It no longer even surpasses fiction: it captures every dream even before it takes on the appearance of a dream.

Johnny Clegg’s reality was an anathema to the apartheid regime with its scripted artifice – a super race of white Africans with its own art and brand new language reinforcing a new mythology of heroic Voortrekkers manhandling their oxen piece by piece over the Drakensberg and then having to stand back to back, ox-wagon lashed to ox-wagon in a laager, as they fought off Dingaan’s betrayal at the banks of Blood River.

Imagine then this little white boy, befriended by one of those migrant labourers; Charlie Mzila, an economic refugee from the vanquished Zulu kingdom, learning to play Zulu guitar. Imagine him doing it so well that Sipho Mchunu; another scatterling, another child of Mageba, would wander south from the Houghton mansion where he was a gardener to the flatlands of Yeoville, to challenge this young white boy to a guitar duel. Imagine them venturing into the hostels of Jeppe and Wemmer deep in the bowels of the Joburg CBD to entertain the off duty workers with their bawdy men’s songs; the lyrics drawn from the foothills and valleys of that same mountain country, of the cattlelands that most would only see once a year on completion of their contracts, but which the yearning for gnawed at them like a toothache.

WE DON’T KNOW WHEN OUR DAY WILL COME

WE ARE WAITING WITH A HEART,

– Lyrics from ASILAZI ( we don’t know the day).

Imagine him dancing the dance of the warrior, improving his command of their language as he learnt all the associated tropes, art forms in fact of the warrior; the stylised challenges, the stick fighting, the initiation into a brotherhood of men so very foreign to the middle-class English upbringing that his mother had left behind to come home first Israel and then to Africa. Picture his desperate bid to escape a single broken home, bereft of a biological father and then a step-father and instead finding that substitute in an underclass of men condemned to a life of servitude.

As Clegg remembered years later: “When I discovered Zulu dancing that changed my life. At the age of 15, the whole new world of a warrior culture unfolded. The songs, the words, the movements, were a gift. My ambitions to become an African, but not in the sense of an Afrikaner who is also an African. I – a white person born outside Manchester in the UK – wanted to find my own personal road and in that darkest of times I discovered an African migrant community that was so happy to have a white kid dancing in the hostels that they accelerated my urban adventure into a tribal world.” 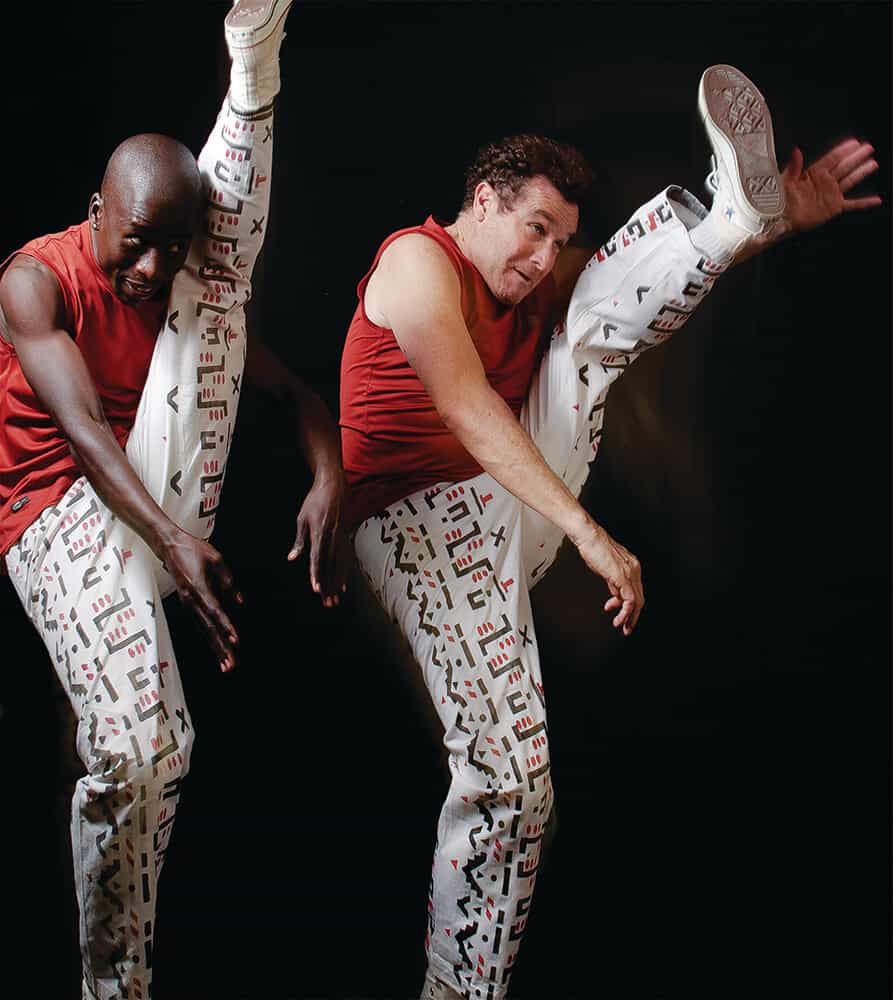 And therein lay the gift that he would share with the rest of us. From Johnny and Sipho to Juluka, later Savuka and finally Clegg’s own solo career that became more and more anthropological, closing the circle on the academic career that he had left behind to forge a path that was not just unusual for its time but actively discouraged both by the apartheid regime and indeed the cultural commissars of the liberation movements. Finally, as he came face to face with his mortality, he embarked upon a final fantastic journey, a farewell to his fans and his country that was as much an artistic retrospective as it was the embodiment of Baudrillard’s thought that his reality had been the country’s dream – when none of us had dared even conceive of it.

Introducing his Celtic musical interests to the rhythmic Zulu melodies, he discovered powerful positive archetypes in a country where toxic masculinity remains the root cause of a shameful level of gender-based violence. By embracing the other, without ever renouncing his own identity, he provided a resonance that bridged the racial, class and social schisms imposed by the regime and helped the oppressors find ways of coming to terms with their acts they would have perpetrated, so say nothing of the grand crimes against humanity committed in this name, to confront that evil and to begin to be able to ask for a forgiveness.

Afterwards, he would provide a channel in a world of increasingly fragmenting identities and increased contestation of identity politics, for us all to find our common humanity through his art and his example. Racism could not exist through the prism of Clegg’s world – he removed the veil that the apartheid government used to cover those who were subjugated and de-humanised – and he made their world, their culture, accessible and even aspirational through his subtle though unflinching lyrics and his melding of musical influences. 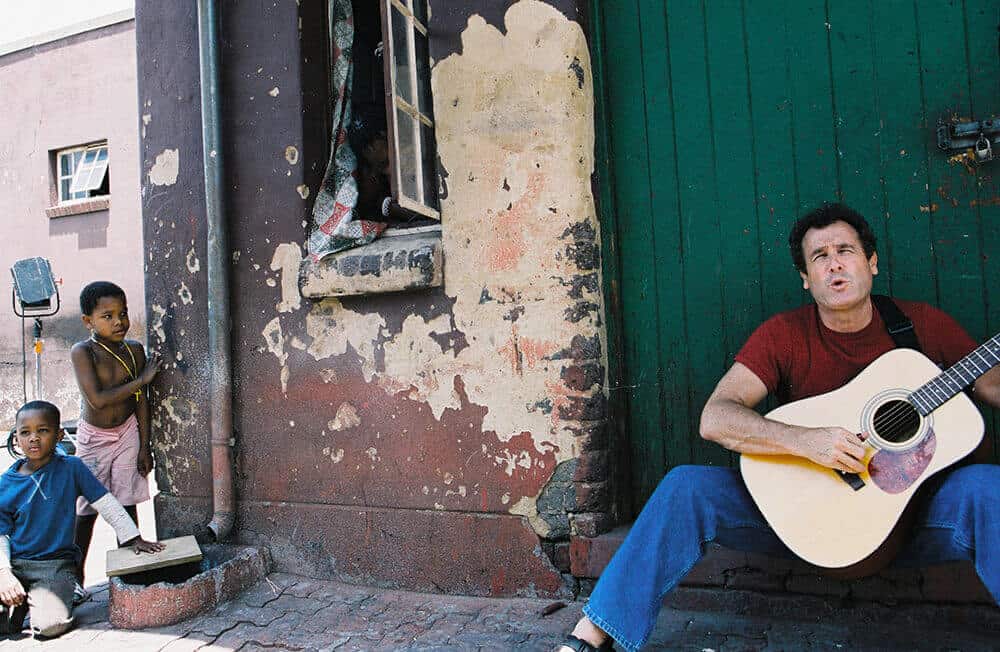 I disagree with the popular theory of ars gratia artis – the point of art is provocation – not in the literal British sense but in the French concept of a healthy intellectual yet robust hearty debate at the heart of which is the pursuit of a mutually positive truth, which perhaps explains his early and enduring commercial success in France. Clegg had a profound art, a massive mastery of his craft. He understood his medium, he used it to evangelise and indeed did it so well that not once was he ever accused of cultural appropriation, on the contrary, he became an icon among black South Africans for the journey he chose as much as he was a bellwether for a scared and confused former oppressor class.

Art is visual and should be disruptive. Clegg’s music did just that – the lyrics of his earlier Juluka group left no doubt of the reality of apartheid that many white South Africans ignored. Instead they ignored the pain of the migrant workers toiling thousands of metres below the surface, sentenced never to see the sun or the eerie prescience of “Soon the puppet will be the puppet master” in his hit Heart of the Dancer.

His enduring hit Asimbonanga, written during the height of PW Botha’s State of the Emergency as the repression increased, and political prisoners began to die in detention, was as much a plea to stop the deliberate airbrushing of struggle icons from public consciousness as it was an appeal to white South Africa to understand the undeniable interconnectedness of the greater South African humanity. 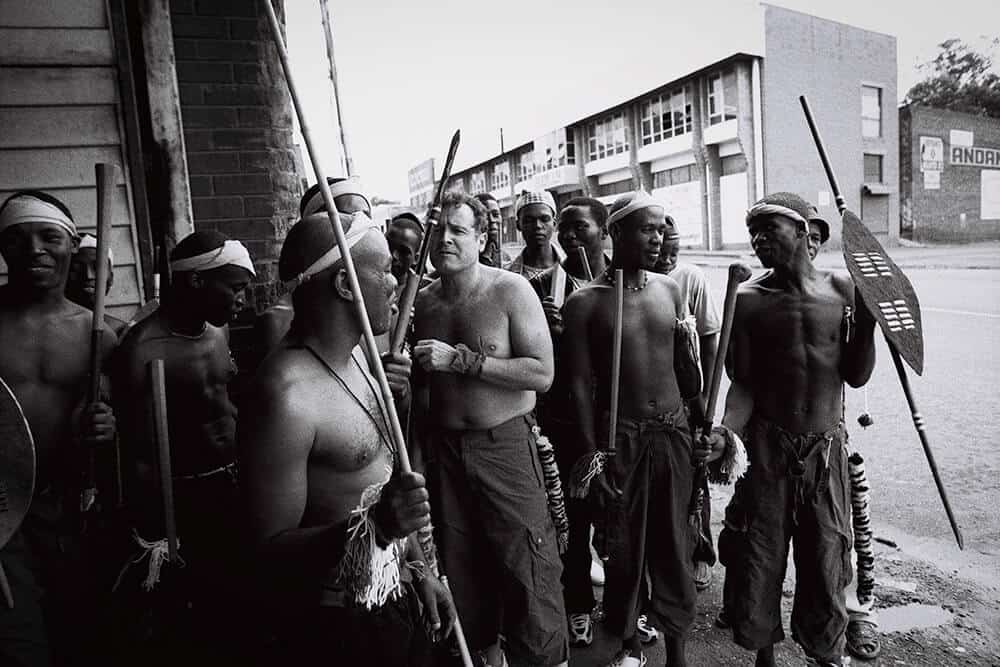 To adapt to life in the western world, Zulu migrant workers incorporate aspects of both tribal culture and inner city living.  Johnny fully identified with this cross cultural mix which is reflected in his music. (Johannesburg, circa 2007) © Patrick De Mervelec

While his lines: “Oh the sea is cold and the sky is grey / Look across the island into the bay / We are all islands till comes the day / We cross the burning water”, are a direct referent to an imprisoned Nelson Mandela and the Struggle leadership incarcerated in South Africa’s Alcatraz, they also paid homage to the great English poet John Donne, who had written 300 years before:

“No man is an island entire of itself; every man is a piece of the continent…  any man’s death diminishes me because I am involved in mankind. And therefore, never send to know for whom the bell tolls; it tolls for thee.”

Homo sapiens is a post-truth species, whose power depends on creating and believing fictions. Ever since the stone age, self-reinforcing myths have served to unite human collectives. Indeed, Homo sapiens conquered this planet thanks above all to the unique human ability to create and spread fictions.

As Harari has pointed out, the three great myths of the 20th century have failed, appallingly – not one of capitalism, communism or fascism has worked. Now as we survey the wreckage wrought by the state capture corporate colluding establishment in our highly contested post-truth era, the time has never been riper for a new narrative, a new myth to unite our human collective. Mandela’s mission, underscored by the soundtrack that Clegg provided, remains the seed of the modern movement. We need to be able to better navigate the very real existential threat of climate change, fueled by human greed and selfishness.

The two icons are dead, but their work – and in Clegg’s case, his art – lives on to guide, to inspire us to flourish as a movement for the world, but mainly for us South Africans with our appalling levels of inequality, to create that better world. As Clegg himself wrote in the much-storied The Crossing/ Osiyeza:

All the words in truth that have been spoken

That the wind has blown away

Oh, it’s only you that remains with me

Clear as the light of day

It is time now for other people to rise up in that space, which he created through his art by channelling the common humanity that exists inside all of us – often in spite of ourselves.

Jon Foster-Pedley is Dean and Director of Henley Business School Africa, which created the Johnny Clegg scholarship for the MBA in Music and Creative Arts in 2014, the only MBA of its kind in Africa to this day.