The Garden Metaphor – ‘Reserve’ at Salon91

Cathy Layzell talk’s gardens and gardening, the politically-loaded concept of reserves, and the driving force behind her latest exhibition, ‘Reserve’, currently up on show at Salon91. 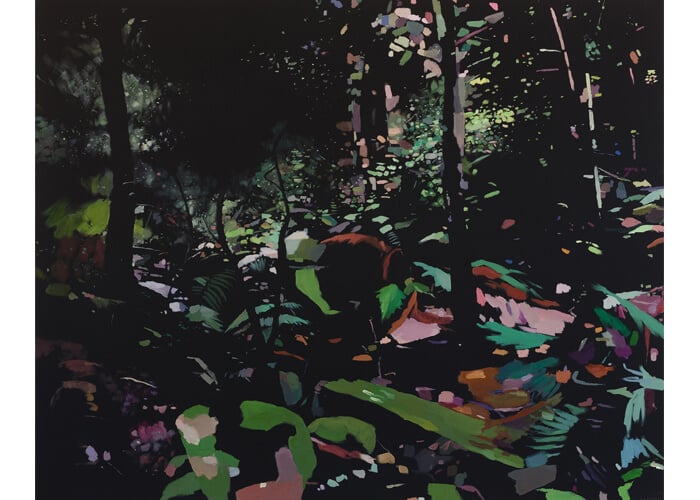 ARTAFRICA: You have been tutored under the likes of Francis Pratt and Gary Wragg, both successful painters based in Europe. What influences have they had on your current practice?

CATHY LAYZELL: My training under Francis and Gary provided me with a living-link to the European colourist tradition. I was interested in investigating colour and abstraction and was invited by Francis to spend the summer working at his painting school in Castelnau de Montmirail in South-West France in 2003. Gary Wragg was an invited visiting artist from London. Their tutelage stimulated questions and ideas, especially about colour in painting, which have set me on a path for life.

As a former academic, Francis had researched the cognitive processes underlying drawing and colour perception. His teaching integrated traditional artistic practices with ideas from science about how artists use the visual system when drawing and painting to train their memory. I learned practical approaches to colour that I use to create a sense of luminosity and pictorial depth in my work.

In 2008, I did a workshop with Gary at Matisse’s former home and studio Villa La Reve, in Vence – near Nice. We discussed the similarities and differences between Matisse and Bonnard’s use of complex colour and picture space, and I learned about the art of layering colour, colour contrasts, and space between colours and colour edges. 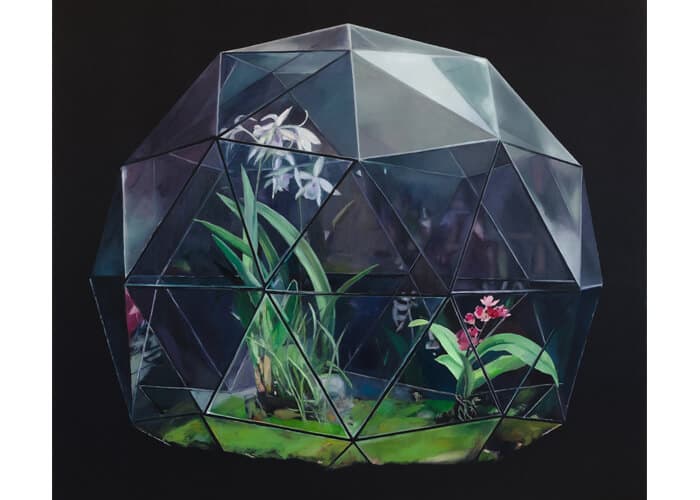 In your artist’s statement, you compare your role as an artist to that of a gardener, attempting to strike a balance between controlled cultivation and unfettered growth. Can you please expand on this, and how do you portray this notion in your work?

For me gardening is a great analogy for understanding the creative process. Gardens take careful planning and research, timing, effective design that considers aesthetics, ethics and functionality. A master gardener is able to think about the whole garden as well as pay attention to details. Gardening is technical. It requires sheer hard work and consistent habits and is often about learning the hard way through trial and error.

As a gardener you first seek inspiration for the type of garden you want, then you design the space, and only then do you purchase your plants and seeds and prepare an environment that will support the growth of the plants. Each season brings different climatic conditions, opportunities to experiment and new varieties to seed. It is not entirely a role of domination and control as plants have their own unpredictable patterns of growth and ways of surviving in the wild.

As an artist you choose your subject matter, you gather source material and inspiration, you lay down a framework that will allow unfettered expression to happen. A painting, like a garden, is a self-conscious framework with defined borders. Within that framework there is a constant dance between decision making and planning and allowing intuition to take over and direct the brush. 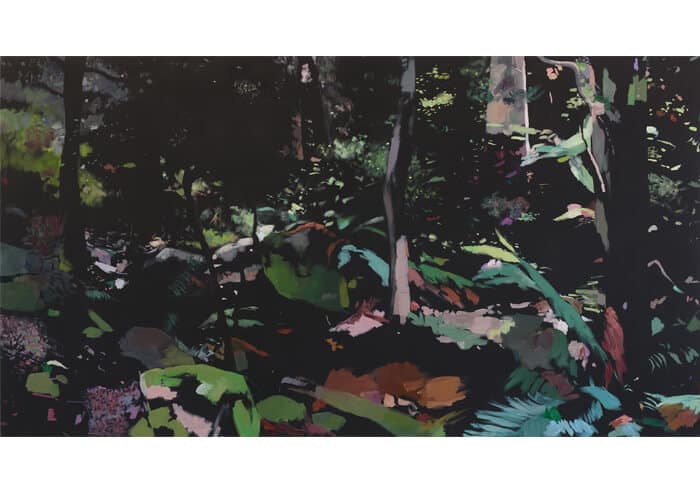 Previous bodies of work, like Expulsion from the Garden, explore the complex relationship between mankind and nature, where an impulse to shape, tame and control the natural world exists alongside a desire to yield to its wildness and its danger. How do you even begin to visually express and translate such notions?

The garden metaphor is particularly loaded. As the bioethicist Gregory Kaebnick says, ‘a garden is not an ethical place. Life and death occurs at a gardener’s caprice. Plant or cut, tend or kill, include or exclude: it’s an exercise of morally unconstrained will, fine in a backyard but requiring boundaries both literal and philosophical.’

As a painter I follow the impulse to shape, tame and control the creative process by making conscious decisions about source material, image, scale, surface and palette. From that point on I surrender to the painting process which is unpredictable.

For this body of work, I worked from photographic digital images of forest landscapes. Zooming into the details, I then translated the specks of coloured light onto flat black primed canvases. This process led to a meditative abstraction in which I began to use minimal colour fragments to define the negative spaces, thus leaving the viewer to complete the image in their brain.

The visual system is hard wired to group together seemingly unrelated fragments of a single object. When the correct fragments click into place recognition occurs and we feel a gratifying “aha” which is the limbic system, in effect, saying ‘here is something important. Pay attention’. The brain only needs a few diverse references in order to construct an image from the visual data bank. Imagine a tiger hidden behind foliage. All the eye receives are a few yellowish tiger fragments, but your visual system assumes that all these fragments cannot be alike by coincidence, and so it groups them to assemble the object and pay attention.

The pleasure that the brain finds in pattern recognition and image formation ultimately has its basis in evolution, as our visual and emotional responses to environmental stimuli evolved to enhance species survival. In my painting practice I have been investigating the visual cues that nature triggers in us. My work starts as a meditation on the images in nature that have caught my eye. By pulling out abstractions and reflections I am able to stimulate the visual pathways that the brain uses during recognition. In so doing I access my subconscious affinity and relationship with nature. 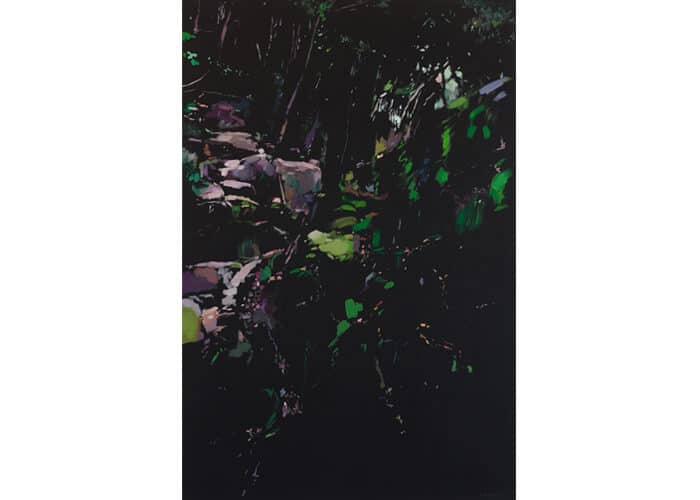 Can you tell us about how you came to the title of your upcoming solo exhibition, Reserve?

My previous exhibition explored the archetype of “wilderness” which extends deeply into our collective unconscious. The rhetorical use of ‘wilderness’ has, in fact, an ironic twist, for wilderness as a natural environment exists more in history and imagination than in fact. With the disappearance of most of the primeval forests we have left only what are called, oxymoronically, wilderness ‘parks’ or ‘reserves’.

As Professor Peter Britz explains, “Reserves are intended to conserve nature in a representative way and to sustain biodiversity. But the reality is that they are increasingly relics of how ecosystems looked before humans became dominant. But on a psychological level, humans are products of a pristine nature that we co-evolved with over hundreds and thousands of years complete with predator fears, an affinity for certain kinds of shelter and forest cover, water, and paths. Although no longer trained by our parents to live and survive in nature, we have an instinctive affinity for it – that we sense in reserves. We often feel empty surrounded by the tarmac and cement of the city. Nature, even in the highly artificial form of city parks contributes to a feeling of wellbeing.”

The landscape we see today is vastly altered, albeit quite green and beautiful in places. What is left of the pristine, “wilderness” ecosystems is increasingly limited to “reserves”. 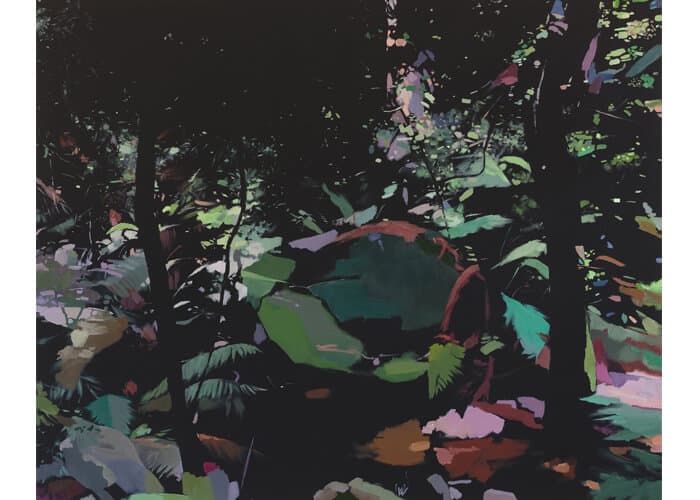 In your artist statement for Reserve, you mention that a reserve can also be considered as a highly charged socio-political concept. How so, and how do you convey this in your paintings?

The concept of Reserves embodies arguments that have percolated through conservation discourses for the past couple of decades. The relevance of ‘reserves’ to sustainability has become increasingly contested. It is increasingly accepted that ‘Conservationists’ will have to move way from a gamekeeper mentality which views ‘reserves’ as ‘preserves’ which exclude humans, to embracing a more holistic ‘sustainable development’ approach which accepts humans as part of the ecosystem.

Reserves also have a politically dark side in colonial countries as the indigenous people have very often been displaced or killed by colonisers in order to preserve nature.

In a world increasingly dominated by technological and economic paradigms, the environment is as much an economic, political and cultural consideration as an innately natural one. Like the biblical Adam and Eve, repositioning themselves in a perilous post-Eden landscape, we are now responsible for the ‘fate’ of Eden whether as destroyers or stewards of nature.

My work investigates the blurring of boundaries between Nature and artifice and what it means to be a self-conscious being in such a world.

‘Reserve’ is currently up on exhibition at Salon91 and will be on show until the 1st April 2017.