Resistance is a giant wheat paste installation on the Grand Parade in Cape Town, a world record figure spanning more than 100 meters. The project aims to make a big statement aiming to contribute to the awareness of the global arms trade dilemma. 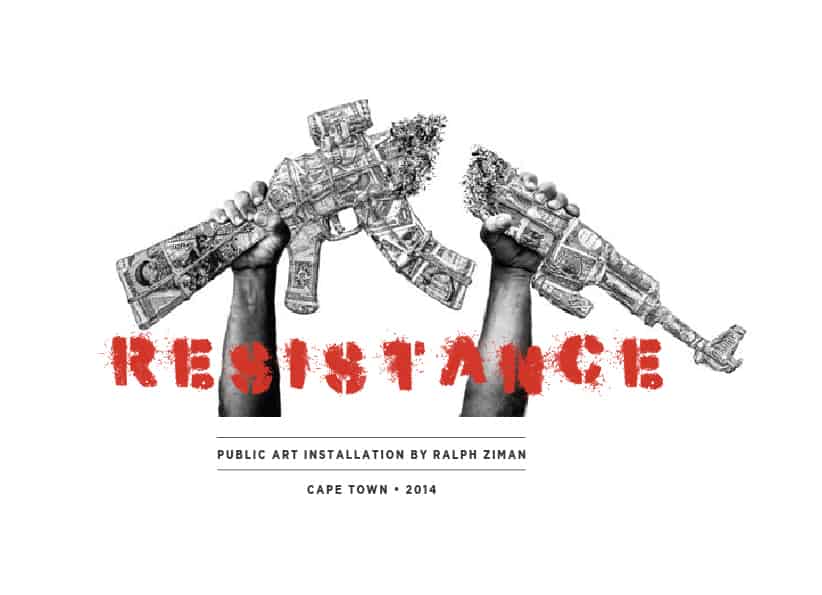 This public art installation was supposed to be done in parallel with the World Summit Nobel Peace Laureate in Cape Town. Sadly the conference was shelved because of His Holiness Dalai Lama’s refusal of entry into the country by the South African government. Ironically the Kenyan President Uhuru Kenyatta, wanted by the International Criminal Court for crimes against humanity was welcomed in South Africa last year, but the Dalai Lama, a Nobel Peace Laureate and pacifist is snubbed.

The installation is taking place in 6-10th October. The artwork will be applied to the floor of the Grand Parade – strategically situated between The Cape Castle and the City Hall, each with its own historical relevance. You can see videos (Episode 1 and Episode 2) of the installation on Vimeo. Resistance was born from a series conversations between Ralph Ziman and anti-arms activist, Terry Crawford-Browne, who is a member of the War Resisters International network (WRI).

Resistance is named for War Resisters International, an anti war organization founded in the wake of the First World War. War Resisters has been in existence for almost a century and has branches all around the world. The logo has always been a rifle, broken in half by a pair of hands.

For Resistance I wanted to update the logo. The gun is now an AK 47, the most destructive weapon in the history of mankind. Invented by Mikhail Kalashnikov just after the Second World War the AK 47 has killed more people than the atom bomb and HIV Aids combined. Some estimates are as high as half a billion people and a majority of them were civilians.

The gun is wrapped in a combination of world currencies symbolizing the international arms trade, a trade that not only pedals in death but also impoverishes fledgling economies around the world, diverting money that could be used for health care and education and fuelling corruption.25% of the world’s corruption is routed through the arms trade making the international arms trade the largest organized crime syndicate in the world.

The artwork is a powerful social statement in its own right. Further social extension of Ralph’s art is manifested in the funding of several NPO’s (International and local) and related community outreach activations, the latest being a Community Arts Experience hosted by the Safety forum Committee of Manenberg. To find out more about this day, check out the Facebook page.

Many hands make light work. The resistance project is born through collaboration and is being supported and strengthened through the various partnerships; The African Arts Institute, Ubuntu Academy, MUTI Films, Wetink, an amazing production team; the overall project is planned and managed by Invisible Sun. 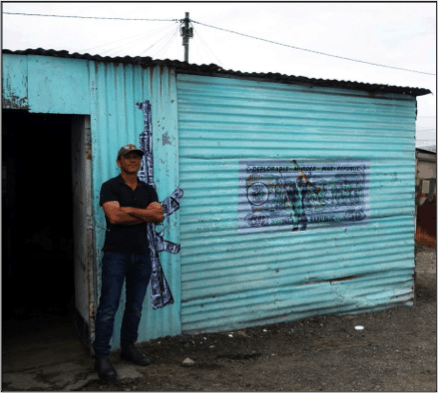 Ralph Ziman was born in Johannesburg, South Africa in 1963. Ralph has directed over 400 videos for artists as diverse as Ozzy Osbourne, Toni Braxton, Rod Stewart, Michael Jackson, Shania Twain and Rick James, winning numerous MTV awards. His work in film includes over 6 features as a writer/director/producer including Hearts and Minds, the first independent South African feature film to be completed after apartheid, which premiered at the Berlin and Montreal International Film Festivals, and Jerusalem (Gangster’s Paradise in the US & UK), released to critical and box office acclaim and South Africa’s official entry to the 2008 Academy Awards Foreign Language section. His public art includes five murals in Venice and a forthcoming private commission in Santa Monica. Ralph lives in Los Angeles with his wife and three children where he maintains a studio in Venice Beach and is focusing on his art practice and a planned documentary component to the Ghosts series, an exhibition that debuted at C.A.V.E Gallery, Venice in February 2014.