‘Resurgence’ at the Henley Business School

The Coloured Cube has partnered with Henley to commission 13 up-and-coming artists who will paint the 26 pillars located in the Henley Africa courtyard, to imbue the courtyard with their own perceptions of African cultural identity.

A new project at Henley Business School Africa’s (Henley Africa) Johannesburg campus will see the Henley environment transformed in a way that further enhances the school’s African identity.  Titled Resurgence, the project is engaging the creative skills of 13 up-and-coming artists to paint the 26 pillars located in the Henley Africa courtyard, imbuing the courtyard with their own perceptions of Africa and their African cultural identity. 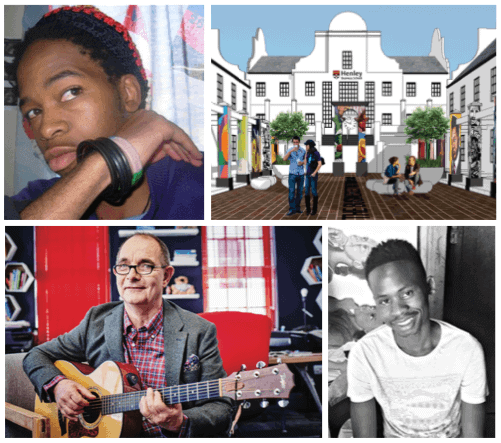 Henley Africa is partnering with artist and creative entrepreneur Mariapoala McGurk, owner of social enterprise The Coloured Cube and current Executive MBA student at Henley, to transform the campus with its Cape Dutch colonial-style architecture into a space that is more reflective of Africa. The project is aligned with Henley Africa’s stated mission: ‘We build the people, who build the businesses, who build Africa’.

Henley Africa differentiates itself from other executive education institutions by embracing creativity, innovation and entrepreneurship and holding creativity and innovation at the centre of its practice. Creative problem-solving, systems thinking and action learning are key components of its educational philosophy and both its academic qualifications such as its MBA and Post-Graduate Diploma in Management Practice and its customised executive education programmes have a reputation for being life-changing and personally transformative, challenging experiences for Henley students.

The thirteen artists, selected for their high-calibre artistry, creativity and skill, hail from the Free State, Gauteng, Eastern Cape and Mpumalanga. They recently attended a workshop at The Coloured Cube where they participated in in-depth discussions on South Africa and Africa and their and Henley’s place in it. They will also be attending a design-thinking workshop at Henley.

“McGurk says Resurgence is about resurging out of the past and into the future. “It’s about acknowledging past, culture and identity and how the artists will transform the space with their individual perceptions and identities as Henley explores its identity in the African context and looks to the future.”

The project is creating work opportunities for creatives in South Africa and giving them exposure, in line with The Coloured Cube’s value proposition.

“Key to the project,” says McGurk, “is allowing the creative process to take its course without knowing what the outcome is going to be as the artists will come up with their creative ideas through an exploratory process. Henley has embraced this forward-thinking approach.”

Jonathan Foster-Pedley, Dean and Director of Henley Africa, said the project is important in terms of enhancing Henley Africa’s identity as the top African business school. “For a while now we have been wanting to transform our campus to reflect our status as Africa’s leading triple-accredited international business school. We are delighted to be supporting South African artists, who will infuse their own African identities and creativity into our campus, inspiring our students to express their own creativity as they engage with their studies at Henley and interact with the wider community.”

Henley Africa is paying for the project while funding has also come from the BASA (Business Arts South Africa) Supporting Grant Scheme, funded by the Department of Arts and Culture. This will see the 13 artists sharing their skills and knowledge with primary and high school children from the Jeppestown area, paying it forward.

Foster-Pedley is keenly aware of the potential for job creation in creative industries to grow the economy. “We want to nurture the aspirations of young people in the creative industries because they are the ones that are going to grow the businesses of the future. That is one of the reasons Henley Africa offers MBA scholarships to people in the music and creative sectors – namely The Creative & Innovation Scholarship and The Johnny Clegg Scholarship. “We want to give people in the creative industries the skills to run value-generating businesses as musicians, artists, fashion designers, architects and inspired teachers and to develop entrepreneurs with creative and business insights to build new types of industries upon which South Africa can create a diversified economy.”

McGurk, a recipient of The Creative & Innovation Scholarship, says doing an MBA at Henley Africa has been life-changing. “It has been fundamental to my understanding of growth and strategy and how I can create a business that is both sustainable and has a positive impact in my community. The MBA has forced me to crack open my mind to consider what tools I need and how to navigate the way forward.”