When I was a little boy growing up in Harare, I became obsessed with the idea of Russia. My parents had a collection of Russian texts, all published during the Soviet era. These books were like picture books that tell the great stories of classical drama. But it was Allison Blakely’s comprehensive book ‘Russia and the Negro’, published in 1986, that made me yearn to be a black Russian; for a short while, I started calling myself “Tinashe Mushakov” and soon fell in love with Anna Karenina; the idea seemed farfetched even then. This idea was recently awakened after First Floor Gallery Harare started showing The Wayland Rudd Collection. 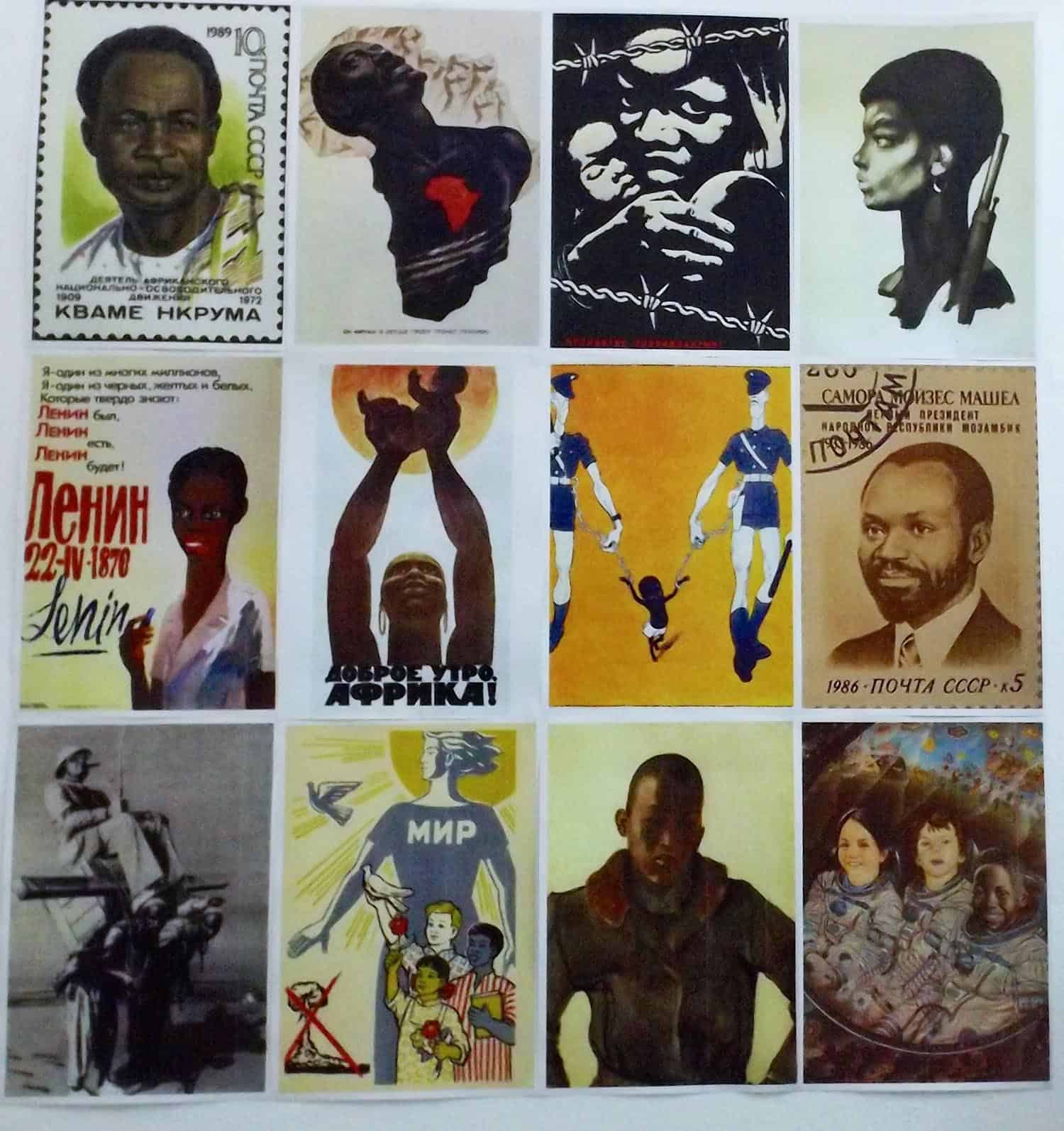 Installation view, selection of Soviet posters about Africa from the collection of Yevgeniy Fiks. Courtesy of First Floor Gallery Harare.

It is an experimental exhibition conceptualised by Yevgeniy Fiks, a Russian-American, with the aim of focusing on the representation of Africans and African- Americans in Soviet visual culture. The exhibition started with a collection of over 200 Soviet images (paintings, movie stills, posters, graphics, etc.) of Africans and African- Americans spanning from the 1920s to the 1980s. Fiks then invited contemporary artists and academics to select one or more images from this collection and to respond to it, either in artwork, or in another form. Some of the participants chose to react to Fiks’ invitation with artworks that were already premade, but which reflect on the issues that are raised in his original call for participation. However it is hard to ignore that it is Wayland Rudd’s twenty year-long career in the Soviet Union that is the pivot of the exhibition.

Rudd,an African-American actor, appeared in numerous films, theatrical performances, and plays, and was also used as a model for paintings, drawings, and propaganda posters and, in many respects, defined the image of the ‘Negro’ for generations of Soviet people. Although only a small section of the assembled images in The Wayland Rudd Collection are of Wayland Rudd himself, the project was given his name to commemorate this American- Soviet actor’s personal story, as a case-in-point of the complex intersection of 20th century American-Soviet narrative. 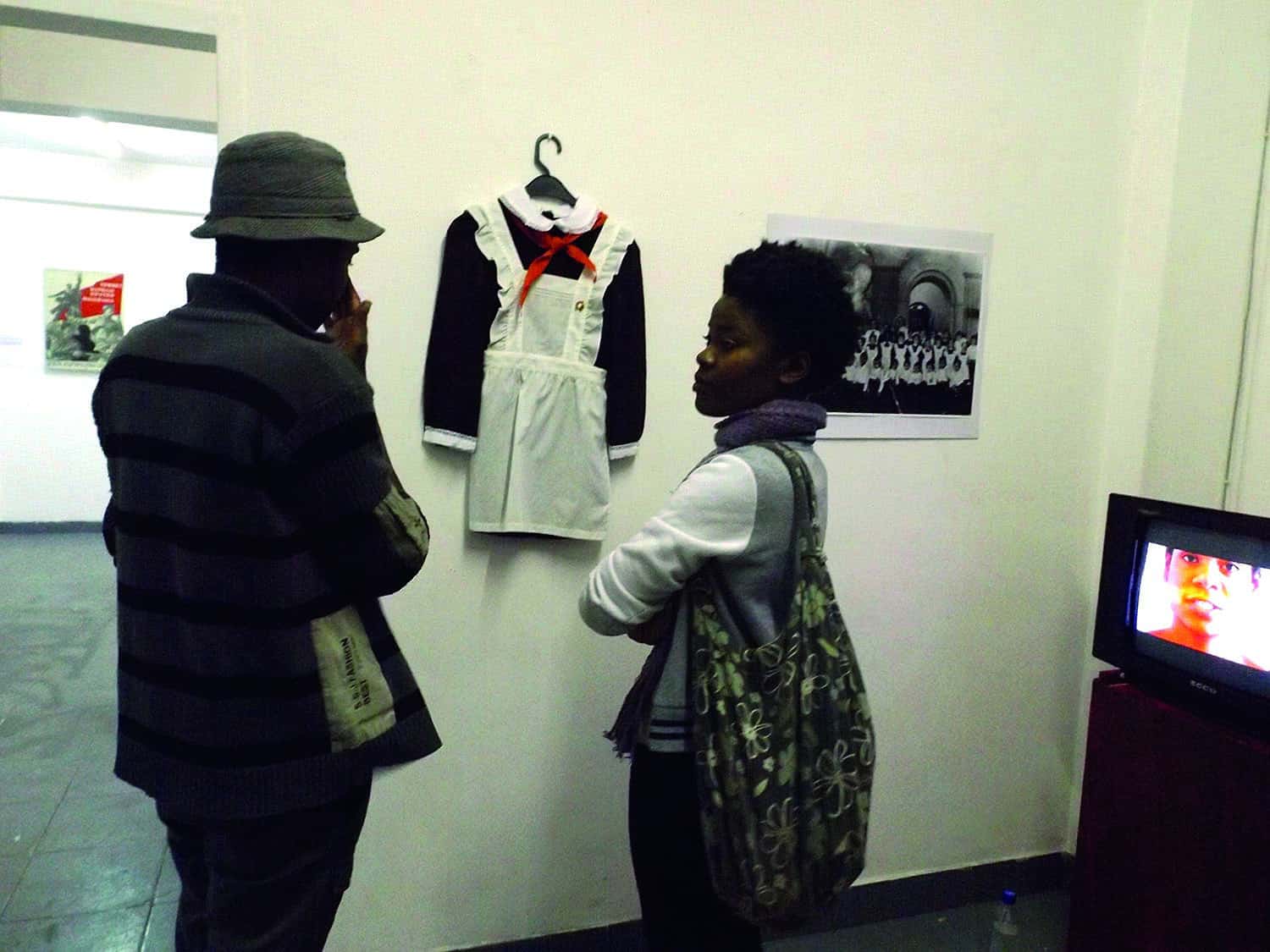 In fact, the historical Soviet images present a very complex and often contradictory mapping of the intersection of race and Communism in the Soviet context. They present this issue as unresolved, revealing the Soviet legacy on race as a mixed bag of internationalism, solidarity, humanism and Communist ideals, as well as exoticization, otherness, racist stereotyping, and hypocrisy. The Soviet Union, the new country formed in 1922 out of the Russian Empire, was a highly attractive destination for many black people. It was the first country founded on the principles of racial equality, world peace, anti-colonialism and economic advancement of the working class. It seemed to offer an ideal society to those suffering under colonial rule in Africa, or racism and economic depression in the United States. As a result, many black people traveled to the Soviet Union, and a number settled there.

The Soviet authorities believed that black people, as members of an oppressed social group, would be key participants in the Communist revolution that would topple colonial and capitalist regimes around the world. It is no surprise that many leading Zimbabwean nationalists trained in the Soviet Union. It was therefore befitting that First Floor Gallery in Harare had a discussion component, focusing on the role of ‘communist Russia’ in supporting the liberation struggle that brought independence to Zimbabwe; giving ‘free education’ to black people in Soviet universities and institutions (in the 60s and 70s) was a means to that end. Also, by demonstrating the Soviet Union’s own racial tolerance and progressive thinking, Soviet leaders were enhancing their country’s appeal to liberal-minded white and black intellectuals around the world, thus securing sympathy for the communist cause.

The Wayland Rudd Collection is not a typically curated exhibition, but rather was instigated and steered by a collective of artists in a variety of media, and hailing from different nations. This explains the exhibition’s composition of film clips, paintings and various multi-media artifacts. The resulting collection captures and explores various notions of identity under the Soviet Union. Sadly the attitude of modern day Russia toward black people has now significantly changed with more reports about racial discrimination. The exhibition first showed in New York at the Winkleman Gallery and then moved to First Floor Gallery Harare; Zimbabwe’s first contemporary,emerging artist-run gallery. The young gallery has also been developing an artist-in-residence programme, bringing senior international artists and scholars to work and exhibit with the gallery and young artists in Harare.

Tinashe Mushakavanhu is a writer and editor based in Harare, Zimbabwe. Mushakavanhu’s review was originally published in ARTsouthAFRICA vol. 13.1.